Danie Mellor explores the paradoxes inherent in the shared experience of Indigenous people and white settler cultures in Australia. He makes reference to multifarious threads and perspectives in historical narrative, contributing a fresh perspective on postcolonial identity.

Exotic Lies, Sacred Ties presents the remarkable development that has taken place in his art practice over the past 12 years (2002 to the present): sculpture, trademark blue-and-white drawings and mixed media watercolours in ornate gold frames. His work addresses his own Indigenous heritage, employing quintessentially European methods in order to echo colonial histories and the complex personal dilemmas faced by Australians today. Educated at the Adelaide School of Art, the Australian National University and the Birmingham Institute of Art and Design in England, Mellor’s education in the western tradition has led him to develop a highly skilled practice: in printmaking, sculpture and painting. His work can be seen as part of the ongoing political dialogue that addresses Aboriginal Land Rights and the appalling conditions under which many Australian Aborigines continue to live today, but he is keen to assert that he is not an activist. “The great Australian silence as nationhood unfolded,” he says, is alluded to in his work, but his primary concern as an artist is, “the way in which cultural knowledge is embedded in objects and in the landscape and built environment”.1

Danie Mellor’s work was included in the Australia exhibition at the Royal Academy, London last year, and I was able to discuss with him his work, family and the exhibition that is being planned for the Edinburgh International Festival in 2014 His work addresses a range of grand themes: death, the European colonisation of Australia in the 18th and 19th centuries and the consequent damage inflicted on Indigenous culture: the loss of language and the ramification of the dislocation of individuals from their sacred lands. Memento Mori (2009) is a confrontation of mortality using highly personalised visual devices. Mellor acknowledges a debt to artists as diverse as Francisco Goya, Jeff Koons and Damien Hirst. Mellor uses the universal theme of mortality to make specific reference to the treatment of Aborigines, who were regarded as specimens not people. “Memento Mori is an appropriation of an engraving of an anatomical theatre. It is about the examination, the exhumation of indigenous remains from burial grounds so that bodies could be examined in an objective or scientific way.”2

The highly ornate frames, on to which crystals and gold have been applied, all but seduce the viewer before the harrowing implications of the work itself are realised. They refer to art historical notions of authority, historic weight, authenticity and the respective roles of art in European and Indigenous societies. Although an effective strategy for engagement, Mellor does not insinuate or apportion blame. Maudie Palmer curated the exhibition of more than 50 works thematically. Exotic Lies; Sacred Ties at the University of Queensland is divided into several sections: Ritual and Safe Keeping, Memento Mori, Cultural Warriors, Arcadia and Silent Witness, thus enabling visitors to experience the full gravitas of Mellor’s work.

Beyond the surface beauty of his signature blue-and-white designs inspired by English Spode china, on to which he projects a curious tableaux of native Australian flora and fauna, Mellor’s work is a systematic appraisal of the dichotomous experience of Indigenous and white settler history since 1788, taking in the waves of migrants from all over the world through the 20th century as the nation evolved. He “does not depict real events,” he says, “but shows history unfolding as narrative. Although there is no actual event being depicted in my work, it is very much about the idea of narrative and storytelling through generations.”3 Central to all his work is the interrogation of cultural knowledge and the manner in which different cultures order and pass it on.

Mellor’s family history goes some way to explaining his ability to create unique visionary works from the position of shared history and heritage: his father is American-Australian; his mother Irish and Scots Aboriginal. Mellor was born in Mackay, Queensland and is proud of the bohemian and musically accomplished and talented members of his family. His mother is a Steiner teacher, and part of his childhood was spent travelling, living in Scotland for a period. Mellor’s work is seductive, humorous and layered with clichés: the enigmatic juxtaposition of objects alludes to incongruities in Australian society. Culture Warriors (2008) shows two kangaroos fighting against the blue-and-white Chinoiserie style inspired by 18th century art and design from China and Japan. British designers and craftsmen such as Josiah Spode chose to imitate Asian designs and to create their own fanciful versions of the east. The style was at its height from 1750 to 1765. The fashion for Chinoiserie drew on this exotic image. The fashion for orientalism in the 18th century provides an ironic twist in works that seek to highlight the transference of culture and, in the case of Australia, the destruction by one of another. The Spode ware appropriated by Mellor was created at the same time that Australia was first colonised by the British and can be seen to encapsulate notions of cultural otherness and the relationship between a Eurocentric worldview and ignorance of peripheral or unknown cultures. Advance Australia Fair (2009/13) combines the iconic kangaroo carrying a rifle, a classical Italianate landscape folly, the green gang-gang cockatoo (Callocephalon fimbriatum) and a neon sign: “illumined”.

Mellor studied printmaking and the intricate process of mezzotint to convey the rich details of history, acknowledging the complex relationships between historical attitudes and individual circumstances and inheritance. “I realised that mezzotint was an ideal process to begin talking about land and history. This was both because of its role as a medium, and also the time of its development as an art form in Europe and England; there was a specific congruence with the use of mezzotint and the development of Australia as a colony. The prints and engravings themselves contained important historical narratives.”4

While a postgraduate student at Birmingham, Mellor visited the Spode factory at Stoke-on-Trent and worked with the engravers in the studio there. The techniques developed by Spode, which were used until the factory closed in 2008, provided him with a background experience of the industry and the skills that had been developed for commercial and mass production. In turn, they have been adapted by Mellor to establish a forensic examination of the past. “At first Spode created reproductions of the Chinese porcelain but then launched their own ‘original’ designs, as well as pastoral and familiar landscapes of England and the Continent. This symbolic subjugation of culture, illustrated through the pictorial designs on Spode Blue Italian tableware, stimulated a dialogue for me about cultures and invasiveness.”5 He combines the Spode aesthetic with aspects of his mother’s Aboriginal heritage.

“My mother’s country, the rainforest areas of the Atherton tablelands in Queensland, is reflected in my earlier work, which dealt more specifically with elements of Indigenous rainforest culture through forms such as jawun (bicornial baskets), rainforest shields and other objects. I became interested in both Indigenous and western designs that depict this country, especially topographic maps, and I reflected on this in contrast with rainforest shields that are also a strong identifier with country. From this interest in rainforest shields, I conceptualised and then made ceramic and metal shields, cut from tin travelling trunks, engraved with drawings and topographic maps. In many of the ceramic shield forms, topographical and geological survey maps were glazed on the surface of the objects to suggest a new means by which country was mapped and understood. This implied a kind of intellectual understanding of the land, and while valuable, was in itself limited.”6

From Rite to Ritual (2009) explores the notion of hidden and secret knowledge, which had evolved from Mellor’s interest in finding similarities and differences between Aboriginal culture and European Freemasonry. He explored ceremonial aspects of early Freemasonry practice in London that correlated with Western Desert ceremonial performances: secrecy was preserved by the erasure of ceremonial marks.

The recent chromed-bronze sculpture Anima (2014) encapsulates many of Mellor’s ideas. The animal’s limbs are truncated and imperfect; indeed, the malformed kangaroo has no ears, tail or feet and is compelling in the manner in which it prompts the questioning of icons and the received history of Australia, replete with the dichotomies and hidden truths that must be addressed before individuals can move forward with a realistic and humane concept of nationhood. 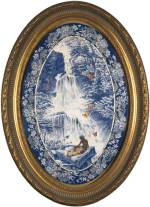 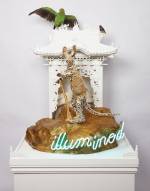 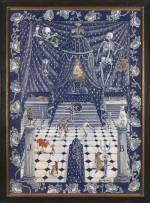