This thought-provoking exhibition, the largest on Hitchens since 1989, deftly explores the enigmas of his work in a career that spanned an incredible six decades 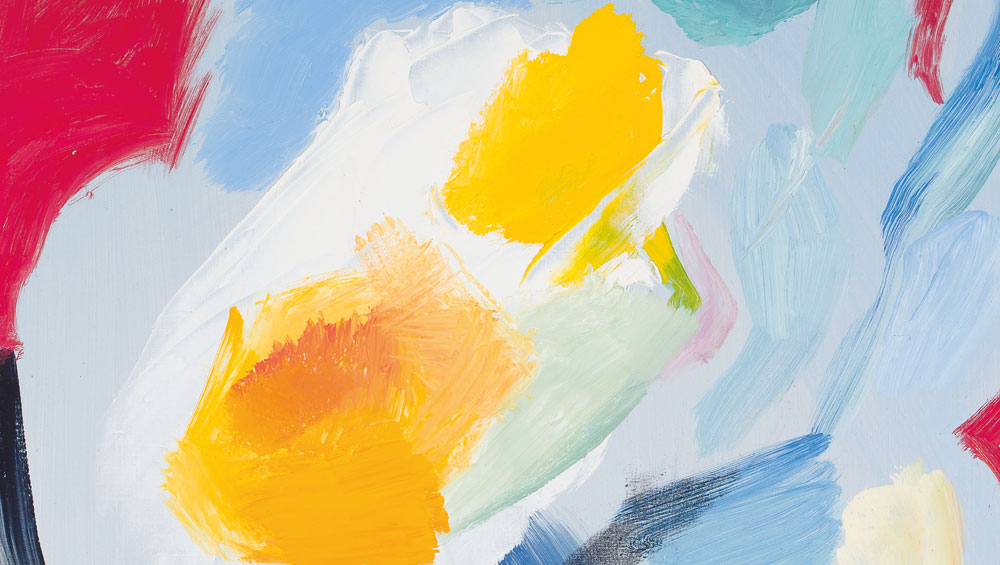 It is, at times, difficult to know why a gallery has chosen to exhibit the work of a particular artist, but this is never the case at Pallant House Gallery in Chichester, where curatorial decisions seem to be clearly situated in the geography, culture and people of the local Sussex countryside. Space Through Colour, a chronological exhibition of work by the painter Ivon Hitchens (1893-1979), is no different in this respect, although a focus on local connections – Hitchens’ painting at his home near Petworth and nearby locations in the South Downs – ripples outwards to reveal the international spirit of his approach to painting the English landscape. 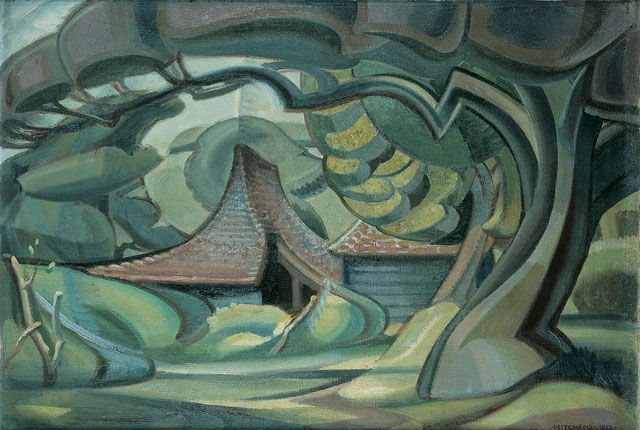 Hitchens began his artistic career in London. After initial training at St John’s Wood Art , he studied painting at the Royal Academy Schools, finishing in 1919 and acquiring his first studio in Adelaide Road, Hampstead, the same year. He tried his hand at portraiture before an interest in tempera found him painting murals in the early 1920s then, later, tempera sketches. In 1920, he joined the Seven and Five Society – the group had formed the previous year and called for a “return to order” after the first world war. Fellow members included Ben Nicholson, Barbara Hepworth and Henry Moore.

While Hitchens held artists of the Italian Renaissance, especially the Quattrocento, in high regard, he also found inspiration in the contemporaneous thinking of Roger Fry in Vision and Design (1920) and Clive Bell in Art (1914). Bell’s theory of “significant form”, with its emphasis on the relationship between line, colour and form was particular potent for Hitchens. His painting Curved Barn (1922) is emblematic of his attraction to the ideas of both Bell and Fry. Hitchens later described Curved Barn as “an essay in essential form and the dynamic relation of one plane to another”. It is an important painting in Hitchens’ development and one of the first works you encounter in a thought-provoking exhibition that explains these formal connections nicely. From the moment you step into the gallery, you recognise an artist who is individualistic yet part of a group, intuitive yet acutely interested in aesthetic theory, English yet international, and this sets the tone for an exhibition that deftly negotiates these apparent enigmas and makes them more fully understood. 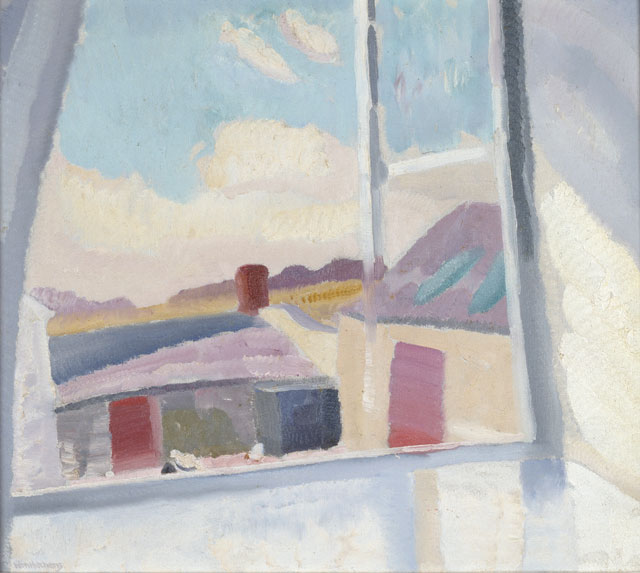 In 1925, Hitchens spend a month and a half with Ben and Winifred Nicholson at Bankshead Farm, located on Hadrian’s Wall in Cumberland. The cold weather during his visit kept Hitchens indoors and the result was a number of interior studies such as A Border Day (Morning, Bankshead) (1925) influenced by Ben Nicholson’s abstraction and Winifred Nicholson’s use of colour. The nature of Hitchens’ personal friendships with other artists is indicated in the exhibition’s small display of touching photographs of him, Ben Nicholson and others relaxing at Happisburgh, Norfolk, in September 1931 and it is wonderful to see. 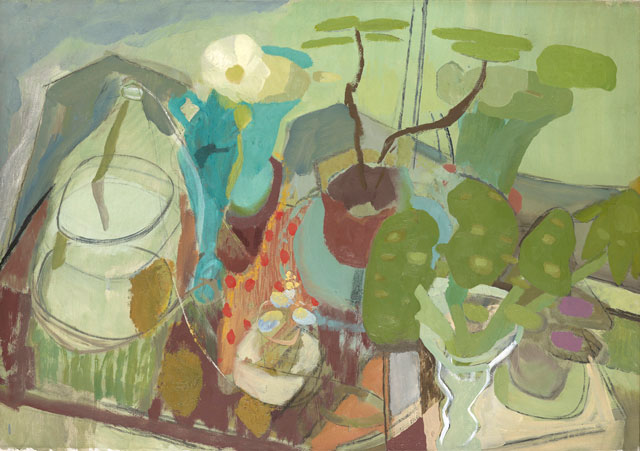 During the 30s, the influence of Georges Braque as well as Paul Cézanne became clear in Hitchens’ work. He admired Braque’s large-scale still-life compositions, and Spring Mood No II (1933) owes much to the French painter. These influences were not to overwhelm Hitchens’ own response to the English landscape and his paintings of this period were rarely entirely abstract. After his marriage to Mary (Mollie) Cranford Coates, in 1935, he continued to find stimulus for his painting in the Suffolk marshes.

In 1936, his painting Winter Stage represented another shift in his development as a painter. The protracted horizontal format and his particular use of colour and space were a departure for Hitchens and an indication of what was to follow over the next 10 years. The dark eerie spaces of Winter Stage hover between interior and landscape, inside and outside and, as such, suggest a psychologically troubling space, although it is difficult to know if that is how Hitchens experienced it.

For 20 years, Hitchens had developed his painting from his London base while making trips to Shropshire, Norfolk, Suffolk and Sussex and the countryside that so often featured in his work. The winter and spring saw him in his Hampstead studio, painting still-life scenes and flowers, with the occasional life model when he could afford to pay for one. In the summer and the autumn, he left London to immerse himself in the countryside, painting, drawing and making notes in his sketchbooks. 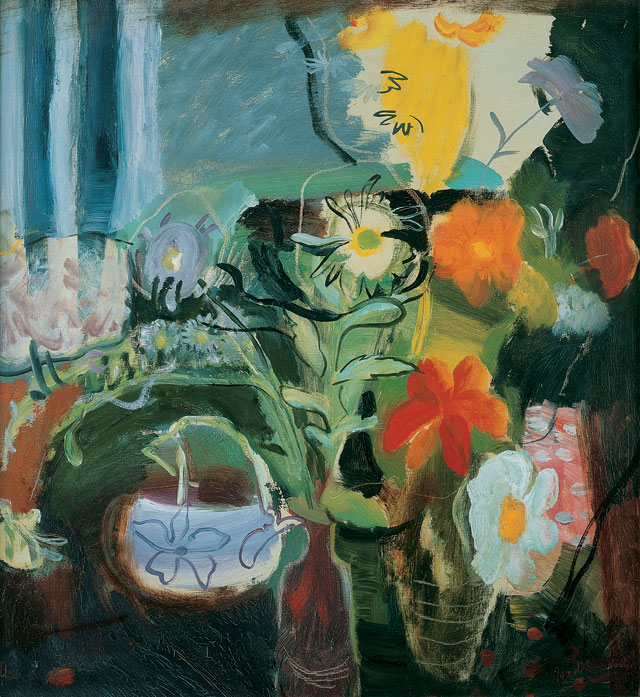 When Hitchens’ Hampstead studio was bombed in 1940, at the start of the second world war, he and Mollie left for Sussex with their infant son. They set up home near Petworth, living first in a caravan and later at Greenleaves, the house they built there. Although he painted still-life studies, interiors and his family, it was the surrounding landscape that became his preoccupation for the next decade.

In the 50s and 60s, Hitchens’ work began to garner interest and critical attention. In 1952, Leicester Galleries exhibited more than 40 of his works. In 1954, he returned briefly to mural painting and undertook a commission for the English Folk Dance and Song Society at its headquarters in Cecil Sharp House in London. The Pallant exhibition covers this commission through preparatory drawings and notes and it is fascinating. In 1956, Hitchens was invited to show 20 paintings in the Venice Biennale and the same year explained his approach to painting: “What I see and feel, I try to reduce to patches and lines of pigment which have an effect upon our aesthetic consciousness, independent of (though interpreting) the facts of nature in terms of a relationship of all the parts.”1

Hitchens’ words here are helpful in beginning to understand his fluency in, and commitment to, realising his sensations in nature and useful in navigating his landscapes, such as September Water (1961) and Arno II (1965). The obvious visual abstraction in Arno is there in the title, too. While it is one of a series of five paintings of the River Rother and River Itchen, Hitchens took the title from a river in Florence. Dislocating the geography in this way acted to distance the image from a particular location, so emphasising the abstract nature of the composition. These sorts of ploys and strategies in his increasing shift from figuration to abstraction are well represented in this exhibition, primarily through careful selection of works and also through occasional written wall texts.

In 1965, Hitchens bought a property at Selsey Bill on the West Sussex coast. While he continued to take inspiration from the landscape around Greenleaves, he increasingly turned to the coastal scenes at Selsey, which led him to further abstraction and a much-increased colour palette. The dynamic central mark-making and broad brushstrokes of November Revelation is emblematic of Hitchens’ exploration of the connection he found between art and music. That connection surely had much in common with the way he understood another connection, that between space and colour: “The essence of my theory is that colour is space and space is colour.”2 This returns us to the heart of Hitchens’ artistic practice and the heart of this exhibition. From the light, airy paintings of 1925, while staying with the Nicholsons, to the psychological darkness of works such as Winter Stage of 1936 and the vibrancy of late works such as November Revelation zinging off the canvas, Hitchens’ exploration of colour and space endured a lifetime, never stagnating, always shifting and growing. This exhibition tells that story in a way that engages us and leaves us wanting to learn more. 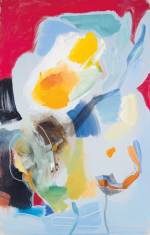 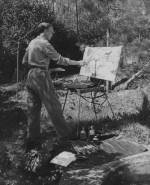