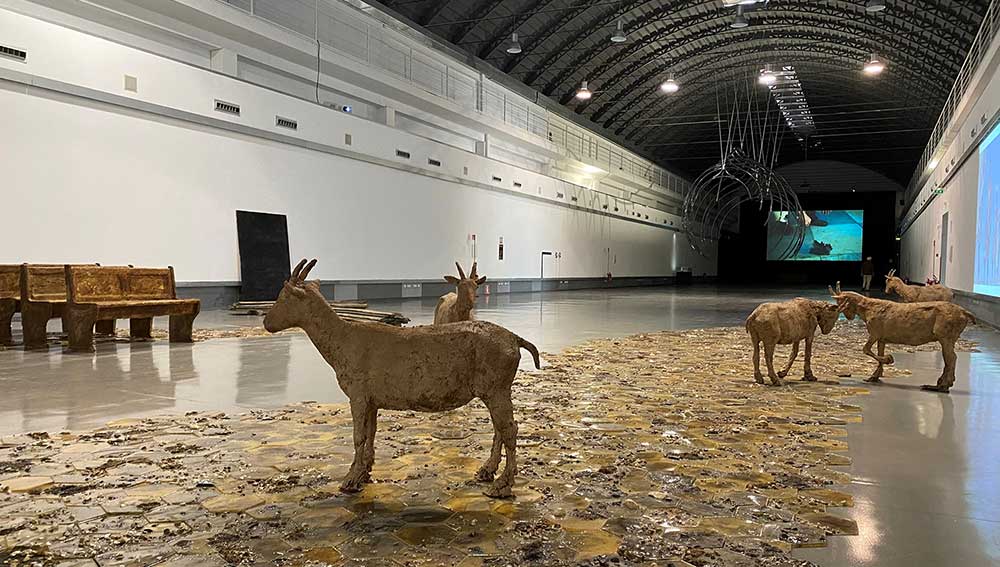 In his 1988 essay, L’isola nuda, Gesualdo Bufalino coined the term “isolitudine” to define the subjectivity of Sicilians. If the Italian word – a portmanteau of “isola” (island) and “solitudine” (solitude) – is untranslatable, this is because its meaning has always been ambiguous, referring to Sicily’s geographic insularity and its long and continuing history of intercultural openness. At Palermo’s ZACentrale (as part of the city’s Biennale Arcipelago Mediterraneo), “isolitudine” provides a point of departure; four separately curated solo exhibitions explore the ways in which the psychological and emotional effects that arise from this condition permeate human life. As such, the term is generative rather than prescriptive, its artistic reimagining largely untethered from Sicily. In different contexts, the artists partake in the “overcoming of geographical and emotional barriers”, or the “tormented search for a sometimes impossible elsewhere”, expanding on the polyvalent definition that confronts us as we enter the hangar-like industrial space. 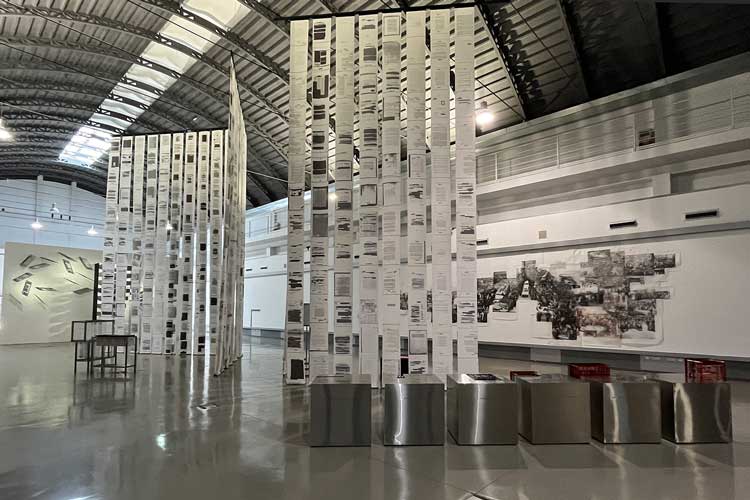 At first, the Chilean artist Voluspa Jarpa’s exhibition, False Flag, strikes as a form of whistleblowing. Her most recent work, Gladio (2022), is a wall piece that maps the violence inflicted by “stay-behind” operations implemented by the CIA, Nato and other organisations to prevent the rise of the left in postwar Europe. Their bronze coats of arms protrude from the walls at waist height, as if asking us to touch – and thereby face the reality of – what has been hidden. The centrepiece, Desclasificados (undated), is a monumental cascade of pages from declassified US intelligence files on Latin American countries during the cold war. From a distance, the work resembles the refuse from a paper shredder; moving closer, the writing is recondite, in the point-blank, capitalised prose of espionage, and the sheer volume of information is overwhelming. For Jarpa is not offering us a narratival exegesis – that’s for the historians to deal with. Instead, she confronts us with the exasperating fact of hegemonic surveillance, honing our senses to its physicality, which is at once deft and cumbersome, imposing on our bodies. We stumble, we crawl – they watch. 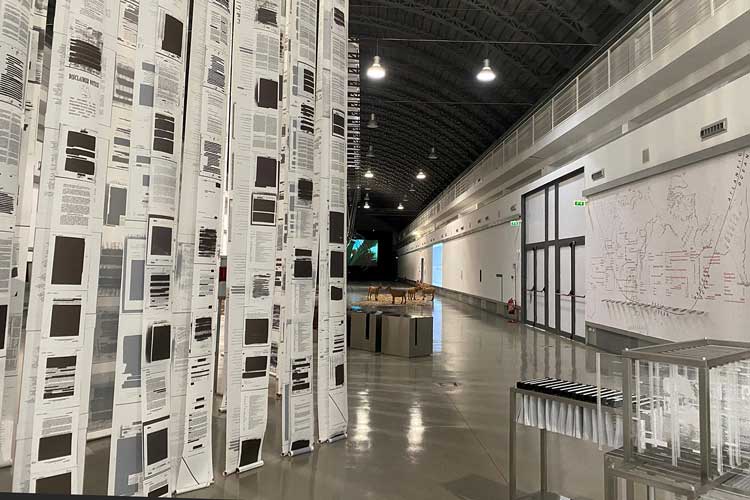 In Lo que ves es lo que es / Judd Vertical and Lo que ves es lo que es / Judd Cubos (both 2016), Jarpa locates the materiality of secrecy in American minimalism, which rose to prominence when the cold war was at its height. Immaculate stainless-steel stacks and cubes – referencing the work of Donald Judd – stand for concealment. And yet segments are opening up, exposing plastic facsimiles of US intelligence documents, as if we are wearing special glasses that allow us to see what the blocks are hiding. Any knowledge of today’s world of hypersurveillance and its attendant secrecy is enough to make us feel that the significance Jarpa gives to these forms extends well beyond mid-century America. The information hidden from view permeates the structures – physical, bureaucratic, technological – we navigate and inhabit, which deny its existence and obstruct transparency and change. Jarpa’s is a paradoxical, Orwellian isolation grounded in noncommunication and magnified by the feeling of being monitored, and thus never alone. 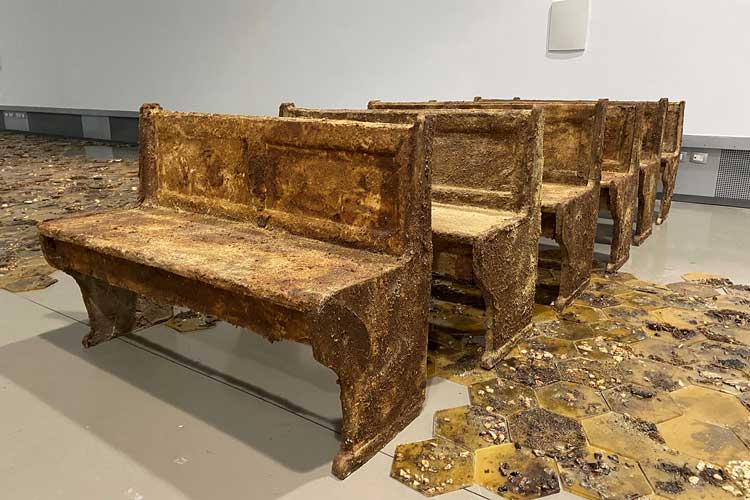 Taking physics as a premise to explore the materiality of myth, the Turkish artist Guido Casaretto also addresses the informational content of the ecologies we live in. For, in terms of material culture, what is myth other than the persistence of the soul in matter? In Black Hole (church bench) (2021), Casaretto takes a wooden pew from a dilapidated church in Istanbul and shreds it, before mixing the raw materials with resin to recreate a sequence of replicas. The title refers to the belief that black holes somehow retain the information residing in what they absorb. Following a similar logic of continuance and finitude, the amount of wood produced by the bench circumscribes the number of times it can be reproduced. Although the pews are lined up as they would be in a church, their unfinished surfaces speak to the process of their making, thus combining with the reiterative ritualism of their original context a material sense of replication. Ritual and science are the same thing.

Enhancing this confluence is the show’s arrangement. We walk through a kind of eco-poetic path, flanked on both sides by Argilla (2019), a pixelated riverbed made of thousands of hexagonal resin tiles. The floor piece acts as a base for Black Hole (church bench), as well as Eddies (2022), five life-size goats – native to the Athenian acropolis – made from pulverised terracotta amphoras. In this way, Casaretto translates information across species and value systems, between civilisation and nature, which he represents as a singular, integrated ecology. The video projected on the wall overlooking the installation, Crossing Carnevale (2019), mirrors our own passage, as if we were quantumly entangled with the film’s four figures – who are both primordial and futuristic in their animal masks and rags, within a landscape that could be another planet – traversing Gökçeada Salt Lake, in the Turkish Aegean Sea. With their costumes stemming from the ancient carnival of the Manuthones in Sardinia (another Italian island), the figures perform another replication. Within this atemporal world, we are at once atomised and interconnected, different and the same. 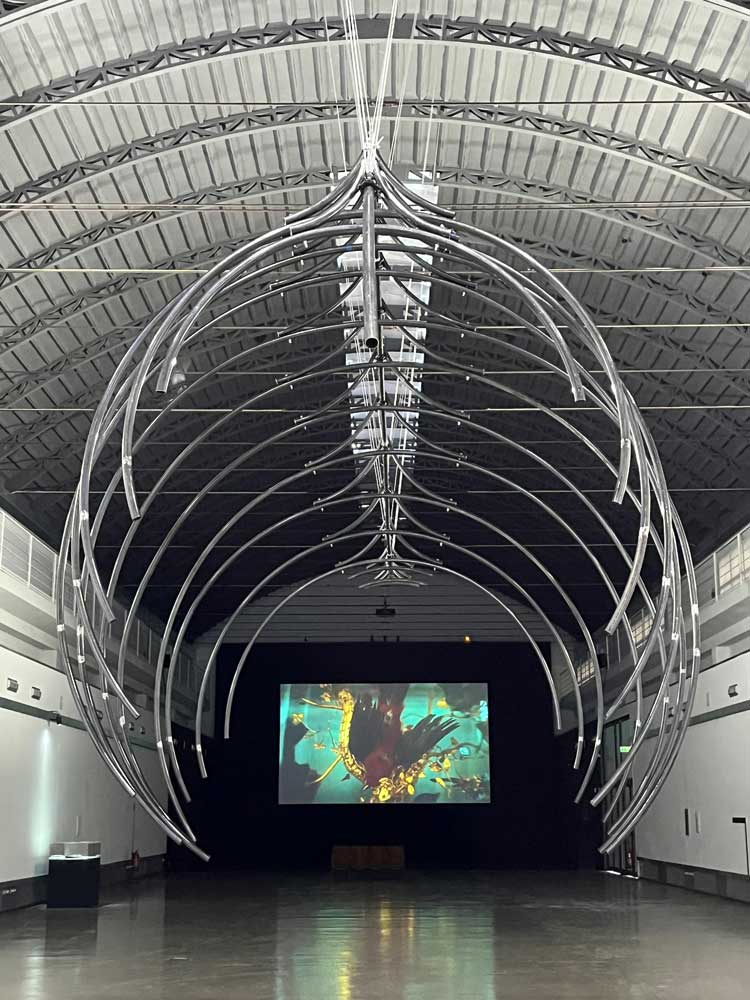 The affective charge of the Slovak artist Petra Feriancová’s show, Vertebra (2022), a large, site-specific audio-sculptural installation, took me by surprise. Like Casaretto, Feriancová explores the threshold of myth and science. And like Jarpa, she is concerned with how regimes of knowledge ingrain themselves into the built environment. A ribcage of semi-circular metal pipes hangs from the building’s ribbed ceiling, as if somehow evolving from it, or into it. It immediately brings to mind the immense treasures that adorn the atria of natural history museums – I’m reminded of Hope, the blue whale skeleton greeting visitors at the Victorian museum in London. The use of industrial materials (metal also binds Hope’s bones together) resonates with the artificiality of our rhetorical manipulation, and institutionalisation, of nature as a concept. That we instinctively see Vertebra as a whale reflects the structures of power, and our entrenched and evolved anthropocentrism, that govern our perception. Yet this recognition could equally speak to our desire for a connection beyond our species, a forlorn longing for these pipes really to be a whale.

Echoing this architectural, sculptural and natural-historical call-and-response is what we hear when we put on the headphones attached to the adjacent wall. It’s a recording of whale song. Its musicality makes me wonder if it isn’t artificial. Of course it is, on one level, being a recording, but the curator tells me that it has been taken from the actual sound of whales communicating with each other. The relationship between the work’s aural and sculptural components creates a chiasmus: the artificial-natural against the natural artificially transmitted. To be caught within in it is a moving experience not only because of the emotional profundity of the whales’ voices, but also because we find ourselves entangled in a knot of our own making, at perpetual remove from the love that is in that song, and forced to bear witness to the solitude of humanity. 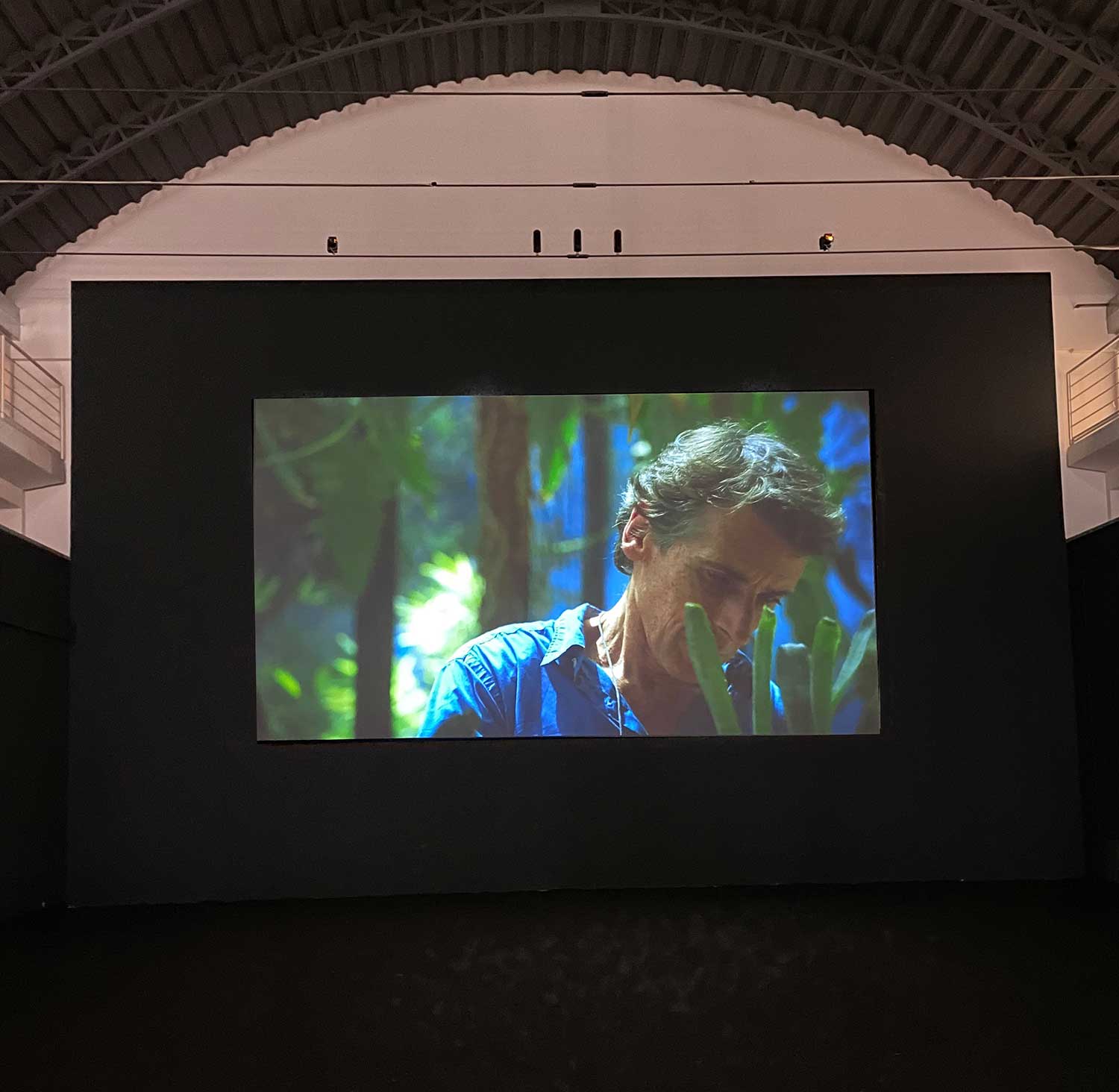 We hear the Italian artist and film-maker Rä di Martino’s Moonbird (2022) before we see it. The composer Mauro Remiddi’s score approximates the spirit of the winged creature at the centre of the film, the haunting woodwind, drums and vocals fluttering loudly throughout the space. Unfortunately, Di Martino’s approach to the isolation of the individual feels too literal, the work’s anthropomorphic imagery too generic, to justify Moonbird’s aural disruption of the other artists’ exhibitions. In front of the screen at the far end of the hangar is a row of old-fashioned cinema seats, beside which is a vitrine displaying a pair of dark feathered wings. Because of the music and allusions to old cinema, these avian remains have more to do with gothic horror than natural history. Handled critically, this could have been interesting, not least given the gothic’s predisposition to interspecies fantasy. But the film is as unresolved in its engagement with this aesthetic as it is simplistic in its approach to humankind’s relationship with nature.

The narrative revolves around Amedeo (Manfredi Beninati), a man lost in his own narcissistic solitude as he confines himself to his villa. One night, Amedeo tussles with an androgynous humanoid (Silvia Calderoni) with wings, who appears beside him in his sleep. Following this encounter, we see Amedeo immerse himself amid exotic plants, culminating in another hallucinatory episode as he enters the trunk of a giant fig tree. These shots were taken in the Orto Botanico di Palermo; a cursory search reveals that the ficus macrophylla was imported from Australia in the 19th century. It is the product of European colonial expansion, as ingrained into human history as the skeletons dangling in our museums. If Amedeo’s oneiric experience is supposed to bring him out of himself and closer to what is commonly known as nature, I’m left wondering if Di Martino couldn’t have unpacked the assumptions on which such imagery is based, even a little.

The quadruple exhibition gives us a strong sense that Isolitudine is about breaking beyond ourselves. This happens – or needs to happen – across species and through and across matter. And while Jarpa does not engage directly with nature or constructions thereof, her work is just as ecological, calling for a breakdown of the noncommunicative impasse between people that is embedded in the lived environment. Isolitudine is a twist on the artworld’s prevailing enthusiasm around collectivity. Rather than deliver a didactic or prescriptive statement, it reconstitutes the challenges involved in assembling the collective, the emotional and practical hurdles that need to be overcome, and the schizophrenic rollercoaster that is our islandness and our solitude and our desire to connect.