Art critic Clement Greenberg coined the term ‘post-painterly abstraction’ to describe the work of the five artists in this exhibition – Morris Louis, Ed Clark, Sam Gilliam, Frank Bowling and Kenneth Noland – yet, until recently, many of them haven’t received the recognition they deserve 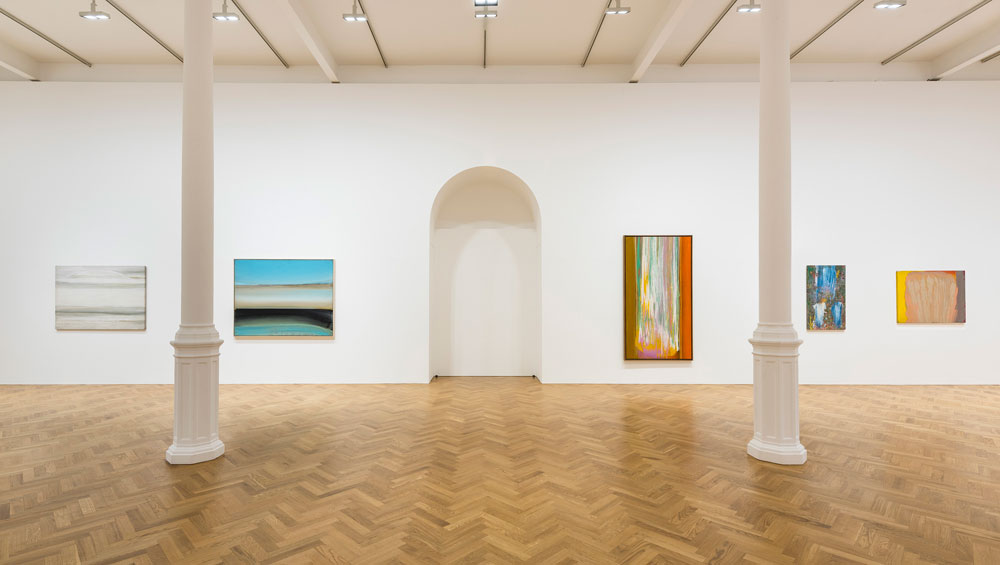 Impulse. The title is an interesting one. While some of the works in this exhibition were made in a single day, the processes that led to them were anything but impulsive. These paintings are the result of years of experimentation and innovation. Morris Louis’ largest canvas in this exhibition is a perfect example of this seemingly contradictory practice. Plenitude (1958) is one of his Veil series, of which he made dozens of similar works in the 50s. In fact, Louis was prolific. At first glance, Plenitude seems simple – a grey wash of paint over naked canvas – and, like many of his paintings, it was finished in just hours. But on closer inspection it reveals its luminous colours – greens and blues and bright salmon pinks – and a facility with paint that his contemporaries marvelled at. 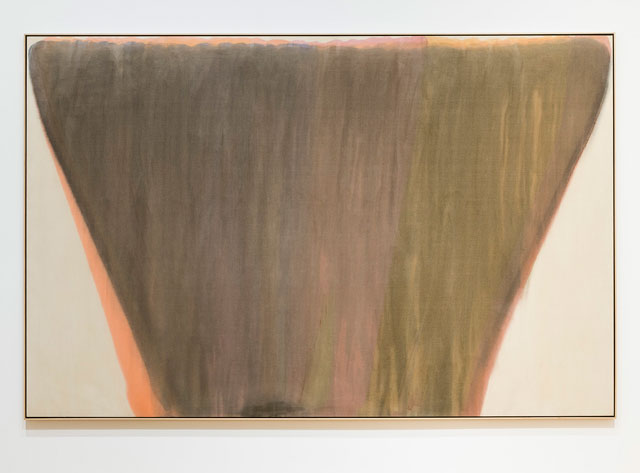 Only by experimenting day in and day out with a new acrylic formula called Magna (which he ordered by the gallon) did Louis (1912-62) arrive at something approaching a painting that satisfied him. He created more than 600 in less than eight years, after having hit his stride in his early 40s. Morris died virtually unknown. It was only soon after his death that the Guggenheim mounted a retrospective of his work, to huge acclaim. It was his fellow colour field painter Kenneth Noland (1924 – 2010) who introduced the influential art critic Clement Greenberg to Louis’ work, and it was Greenberg who brought Louis’ work to the attention of the New York galleries.

Noland’s works – there are three here – play with the sculptural possibilities of painting by using irregular-shaped canvases. But the crux of his practice has its origins in colour theory. He studied under the famous colour theorist Josef Albers at Black Mountain College in North Carolina in the 1940s and became concerned with the emotional impact of colour.  Paintings such as Indo (1977) and Egyptian Cryptic (1978) have something of the monolith about them. They are large, quiet canvases of clean, clear stripes, which cling to the edges, leaving the centre of the composition empty, but for a dappled field of thin paint. They seem restrained, but in a way that seeks to impose order on disorder, regularity on asymmetry, solidity on the unruly nature of paint. 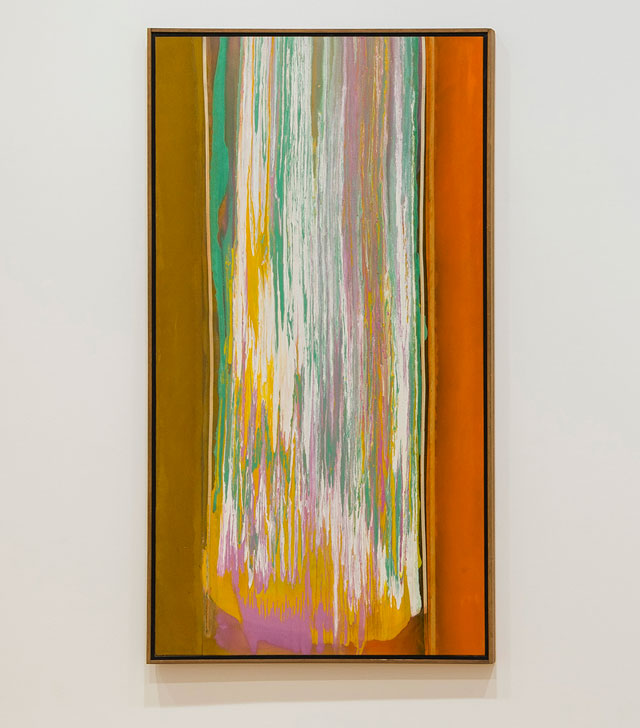 Frank Bowling’s work is much more fluid. Bowling, who was born in Guyana in 1936, moved to London aged 19 to study at the Royal Academy, where David Hockney, Allen Jones and RB Kitaj were among his fellow students. He then left for New York and pursued abstract expressionism, determined to break free of racial associations in his paintings – he was, reportedly, tired of being pigeonholed as a Caribbean artist. Bowling, like Morris, has spent much of his career receiving little attention for his work, but in March 2013, an exhibition at Tate Britain of a collection of his works from the 70s – the “poured paintings” – went some way to remedying that. One such poured painting, Lenoraseas (1976), is on display here, a seductive mix of candy-coloured pinks, yellows and greens that slide in marbling layers down the surface of the canvas. 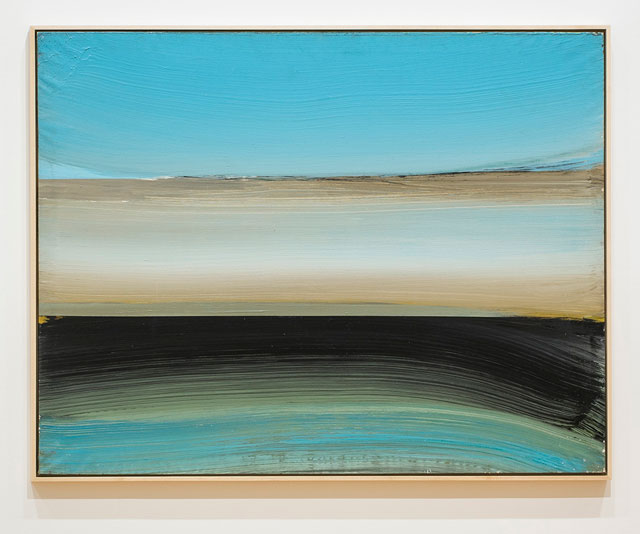 All the artists in this exhibition play with their materials and push the boundaries of what it means to paint. Ed Clark (b1926) also experiments with the shape of his canvases, but his singular innovation is to paint with a broom. Such a tool seems haphazard and clumsy, but his works are surprisingly subtle and smooth, and his palette ranges from the pastel to the vivid. He achieves remarkable depth and it is tempting to see structures and landscapes in his works. Clark might be one of the lesser know of the regulars at the Cedar Tavern – that infamous drinking hole in New York frequented by the biggest names in abstract expressionism – but he has outlived his fellow barflies Mark Rothko and Willem de Kooning and, like the others in this exhibition, has received his accolades late in life. Pure determination has won out. 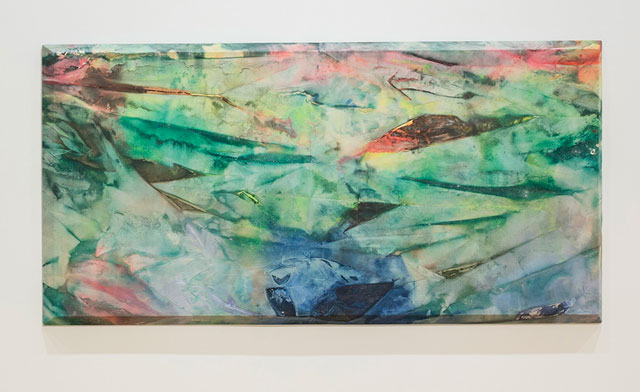 Anyone who visited the Tate summer blockbuster Soul of a Nation: Art in the Age of Black Power will recognise the work of Sam Gilliam (b1932), who, until 2012, had suffered decades of artistic obscurity. Gilliam was sought out by gallery owner David Kordansky and artist Rashid Johnson, who wanted to re-establish the abstract painter as one of the greats of his field, and the endeavour was a success. In 2015, Gilliam had a show at Frieze Masters, and he hasn’t looked back since. He has been likened to Jackson Pollock in his daring. His experiments progressed from bevelling the edges of his pictures to removing them from the stretcher altogether, turning them into paint-spotted sculptures, draped and crumpled and pinched into three dimensions. In manipulating the canvas in this way, he went further than any of his contemporary abstract expressionists in confusing the line between painting and sculpture.

Although this exhibition limits itself to the 60s and 70s, the fact that three of the five artists exhibited here are still painting (the youngest is 81) speaks to their determination through periods of relative and absolute obscurity. This exhibition represents a group of pioneers who loved (and love) the material reality of paint and its properties. And their success is testament to extraordinary tenacity. These men have come from varied backgrounds, but form a passionate group of innovative artists not afraid to push the boundaries of painting and who deserve to stand beside their better-known contemporaries in the annals of art history. 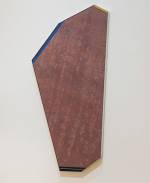