Through the use of old train seats and other salvaged materials, the Ghanaian artist tells a story of his country, rich with the legacy of colonialism, independence and lost opportunities 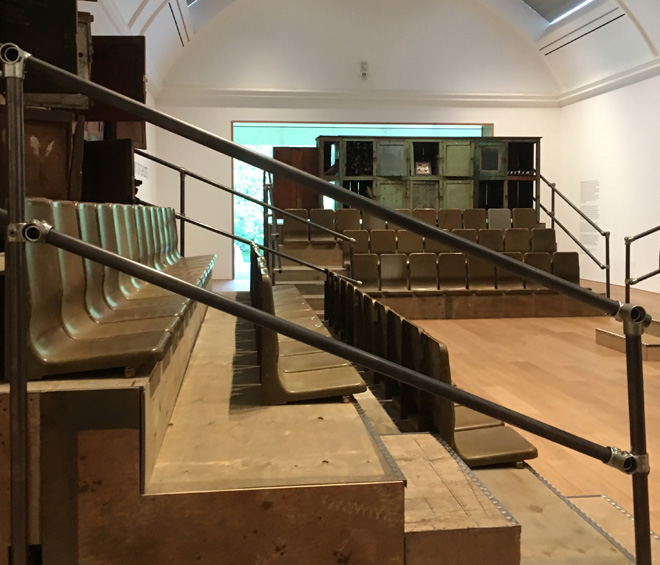 For this year’s Frieze New York, Ibrahim Mahama replaced the flags outside the UN headquarters with jute sacks stained from crisscrossing the globe while filled with cocoa, maize and charcoal, and for 2019’s Venice Biennale, at the entrance to Ghana’s national pavilion, designed by David Adjaye, he created a wall of cabinets, sacking and timber pegs salvaged from Ghana’s scrapyards. Now, with his first solo exhibition in the UK, at Manchester’s Whitworth Gallery, Mahama (b1987, Tamale, Ghana) bids us take a seat in his Parliament of Ghosts, on 120 tatty, second-class, plastic train seats, remnants from Ghana’s railway infrastructure, built under British colonial rule. 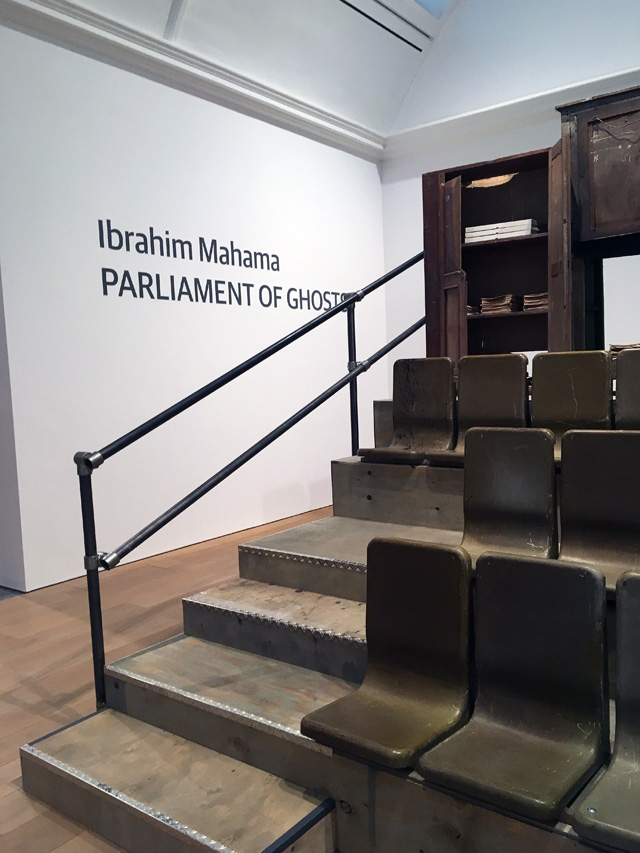 This is a show about opportunity and failure, about promises and lies, corruption and accountability; and what better material to use than that accumulated before Ghana’s independence in 1957, a grubby reminder of the many subsequent regimes that failed to deliver on that era’s optimism. As well as seats, Mahama has repurposed dozens of old wooden lockers once used by train workers, all bearing multiple scars, splinters and scrawled graffiti.

There is also leather salvaged from first-class carriages, with which he has bound albums of historical photographs. Ghana’s train network was destined to expand after independence, but these seats and lockers were left to rot as the country’s infrastructure declined; they were being sold for scrap when Mahama rescued them. Mahama believes these objects carry the memories of everything they have witnessed. “They embody it all,” he told the BBC at the show’s opening.

But this is not a mausoleum – Mahama wants these seats to be occupied, for debates to take place. In the accompanying wall text, we are told: “The parliament is a dense material history of colonial infrastructure, reflected back to us today. How can we use it to come to terms with our current economic and political conditions, in thinking about Brexit or the global crisis of migration?” 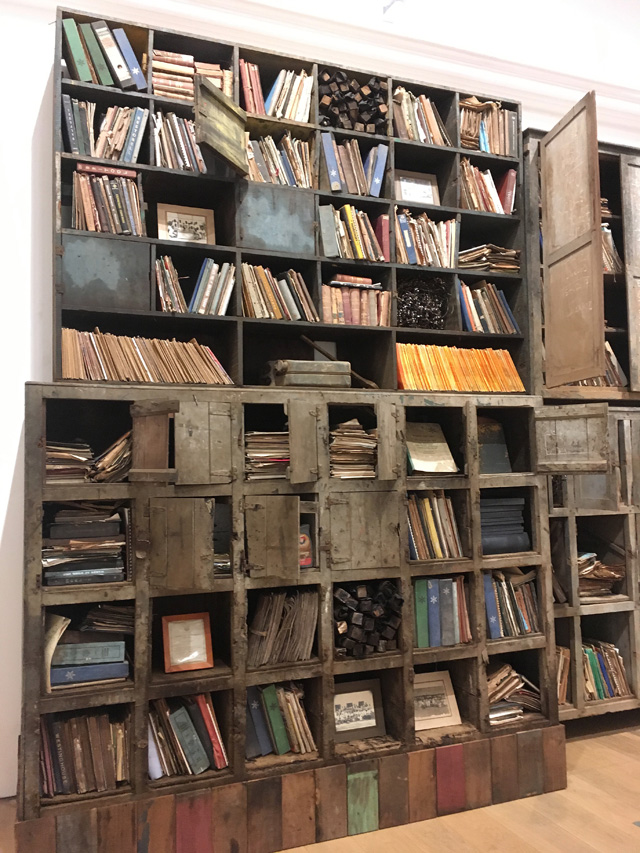 To one side, in another gallery, is The Archive. Here, salvaged lockers are banked up high against the end wall, flanked by two worn-out timber cabinets. Although there is a variety of archive material here, the bulk of it comes from the drawings office at Sekondi Locomotive Workshops. The railway was built by the British in the late-19th century as a key part of the Gold Coast railway’s infrastructure, “for the extraction of resources from the colonies”, and Mahama has brought this furniture – most of it apparently made in England - back to its place of origin, some of it still containing photos, food containers, or even shoes left by decades of Ghanaian labourers. 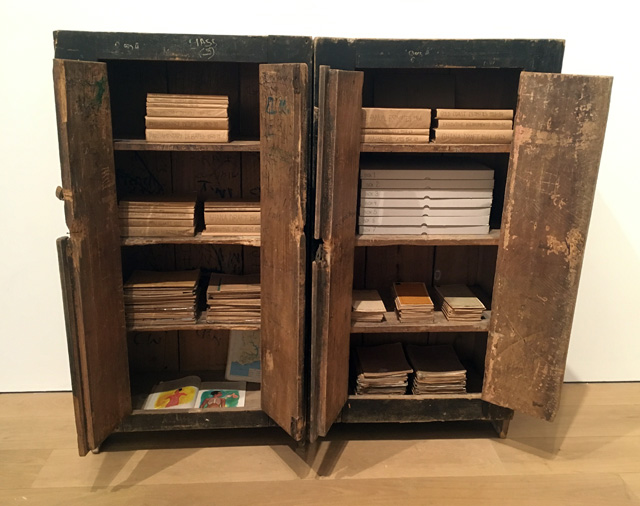 Inside the first cabinet are neatly stacked piles of old, brown-paper-clad files and folders; the artist has neatly handwritten some of the titles: Parliamentary debates 1969-70; and Parliamentary debates 1970-71. Are they real or fake? Does it matter? These records exist somewhere – the actual, hard evidence of the Ghanaian government’s thinking at that point, the decisions that will have led the country to where it is now. I find this display a wonderful reminder that facts matter – something we seem to be losing sight of, as we surf the endless rollercoaster of sensationalist soundbites masquerading as “news”. The rough, ramshackle nature of these structures is in stark contrast to the white-collared bureaucrats whose efforts are recorded in these tomes. 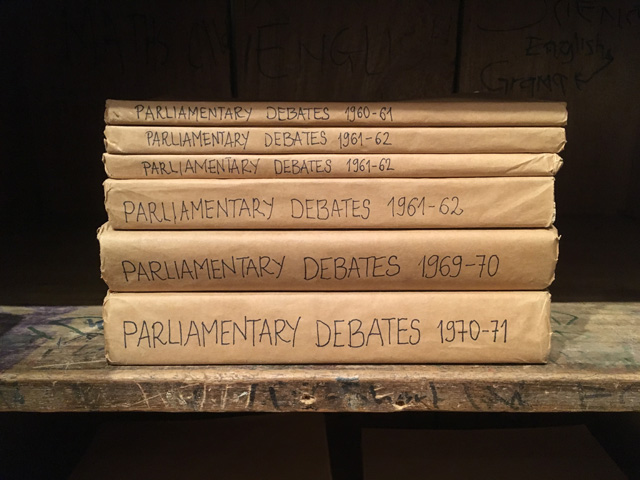 The lockers next door are an even more poetic evocation of the country’s shifting political fortunes. There are scorched timber sticks wrapped in burnt paper, like those Mahama incorporated into his Venice installation. Two alcoves are filled with ribbons of unspooled tape. One stack of books or folders is displayed end on, just the word “timber” on the top cover. Another pile of folders bears the words “Ghana Railway”. These are the “ghosts” of Ghana’s assets, reminding us how they have been used and abused. An old empty plastic oil flask, labelled Total, is silent witness to the country’s rich oil resources, the profits from which have gone who knows where – certainly they have not been reinvested for national prosperity. There are several stained, yellowed, black-and-white photos of officials and politicians. 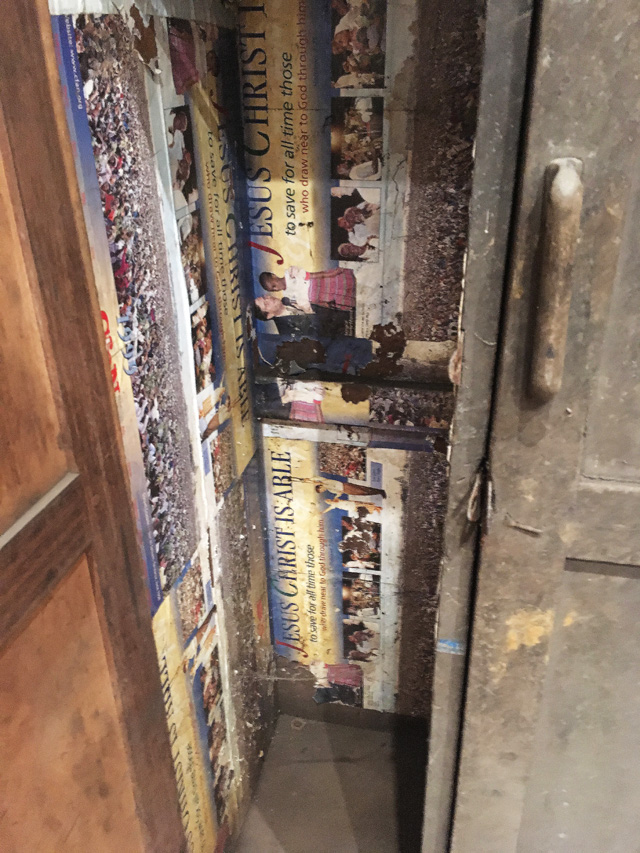 To the right of this monumental work, another, smaller wooden cabinet appears to be almost empty. The central cupboard is lined in various tatty versions of the same evangelical poster: above a photo of a large and happy congregation are the words: “Jesus Christ is able.” As we know, the west’s zeal for sending Christian missionaries to “civilise” the indigenous populations of Africa had serious repercussions. But while there is clearly frustration, rage, and even despair, at the legacy of past failures, Mahama’s work is all the more affecting for its restraint – the objects and how he deploys them are powerful enough; no ranting required. In the cupboards on either side are a few loosely rolled white scrolls - perhaps also posters. Whatever their contents, they show us only their backs, but this paper is clean, stark, white, glowing against the dark, matte woodwork, imbued with decades of dust and heat. Above each of these is an empty shelf, its hollowness also speaking volumes. 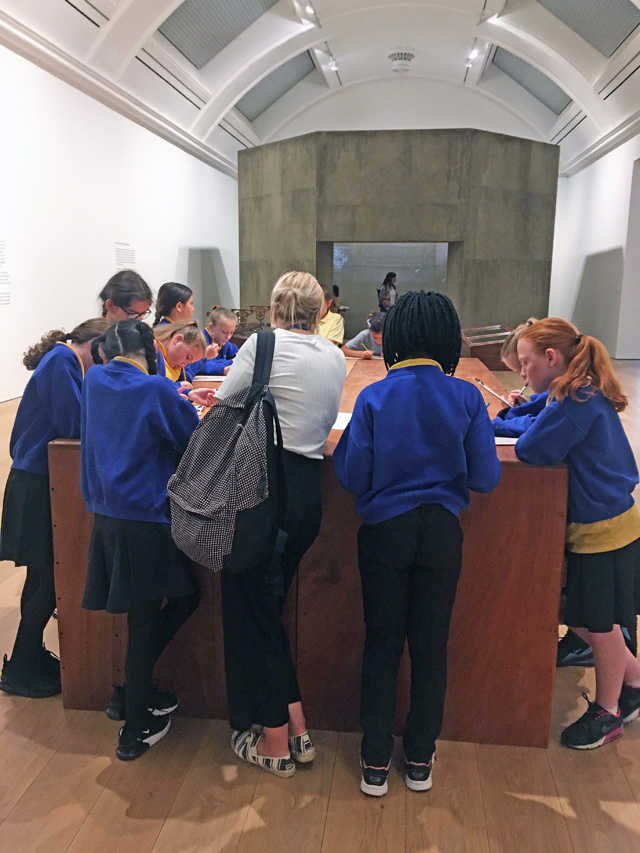 In the centre of this room are a number of wooden worktables, desks and stools, inviting handling and interaction with the archive material Mahama has provided: Ghanaian survey maps, old library books, school exercise books and banking and business reports. On the day of my visit, schoolchildren were eagerly getting stuck in, talking excitedly with each other and with their teachers. One lone child stood gazing at films projected in a silo structure at the end of this room. The silo is a replica of the many concrete storage containers built across the country for the Cocoa Processing Company, under Kwame Nkrumah’s post-independence government, as part of his vision that the country should thrive through its own resources. Sadly, the silos were never used; Nkruma was overthrown by a military coup in 1966, and they remained empty over the course of successive dictatorships. 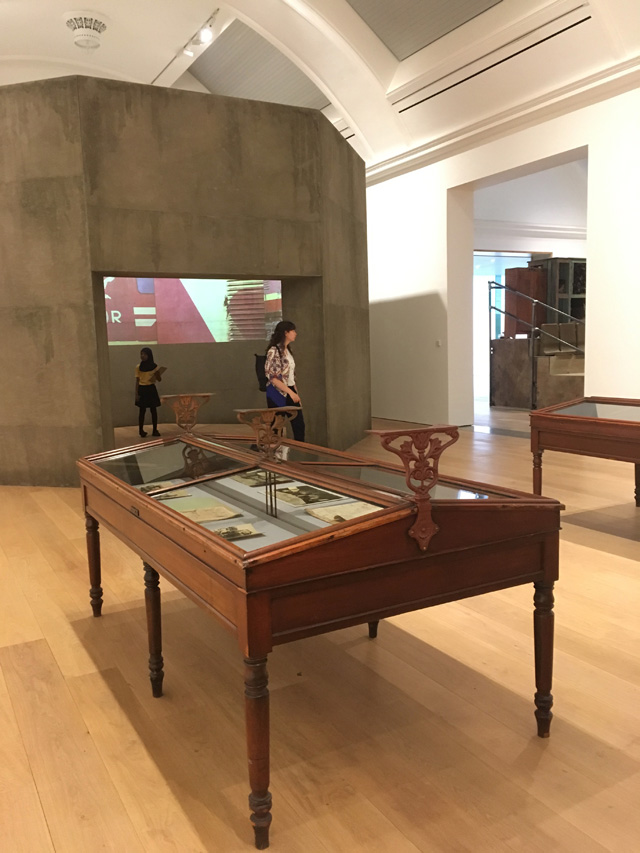 Inside this silo, a calm, female voice narrates proposals of wealth-creation and expansion, transcripts taken directly from 1960s parliamentary papers, while, on to the multiple sides of the silo, projectors broadcast footage of salvaged components being broken down and sorted for reuse at Accra’s Agbogbloshie market – a nod, perhaps, towards the idea that even those things that appear broken can be given new life. 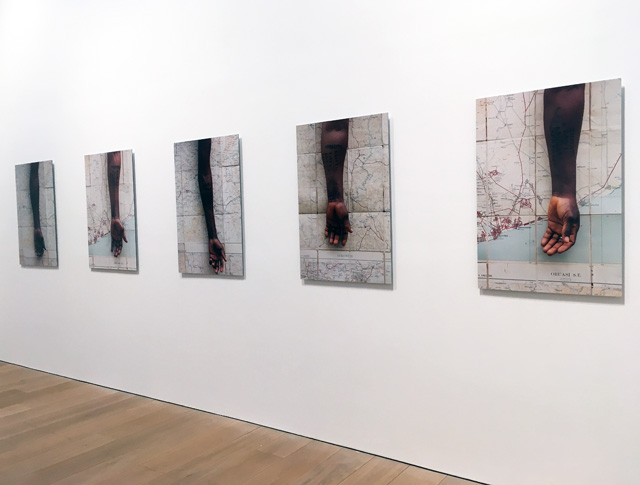 In the third room of this show are Mahama’s photographs and paintings. The photographs document the underside of the arms of the many collaborators with whom Mahama works in his studios in Accra, Kumasi and Tamale. Shot simply against a colonial map, decayed leather train linings, or depictions of the terrain they have crossed, these migrant workers’ arms are tattoed with their names and next of kin’s contact details - a drastic measure that is necessary in case they are hurt or killed in one of the country’s many road accidents or in the often-treacherous industrial working conditions. 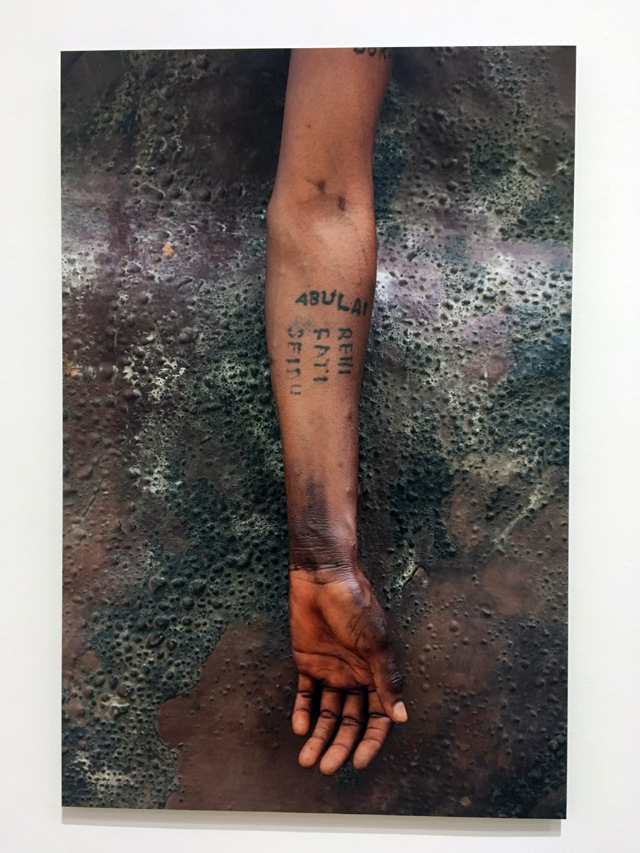 Many of them have apparently travelled from north Ghana, where Mahama was born, to find work in the south. Powerful though these images are, Mahama’s actions are as significant, if not more so: through earnings from his artistic output, Mahama is improving conditions in the north by building cultural facilities and funding local food production. 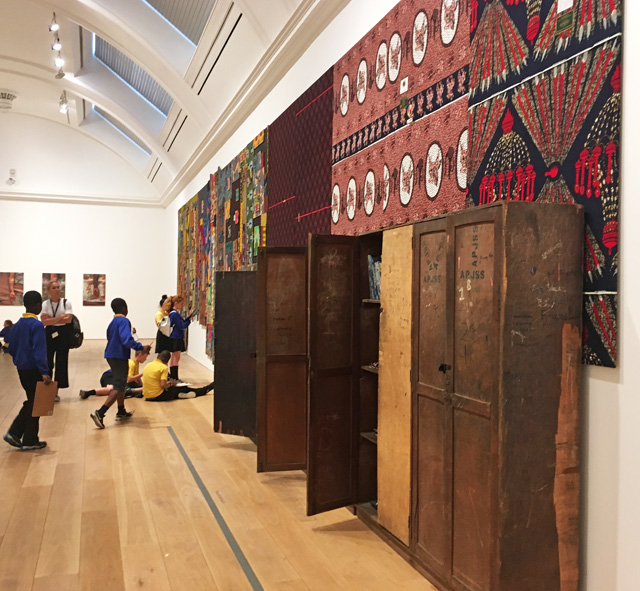 The final pieces are his “paintings” – great collaged strips and blocks of wood wrapped in distinctive Ghanaian textiles, mostly wax prints often made in Holland, China or the UK, as well as Ghana. They are interspersed with wrecked cabinets filled with neatly filed wax print textile packages as well as strip-woven textiles, made in northern Ghana; these became a symbol of national unity after independence. Begun in 2012, these “paintings” are precursors to the large jute sacking works with which Mahama made his name. Here, in their monumentality and glorious, clashing colourations, they suggest the possibility of unity through multiplicity and diversity, and an acknowledgement of history. 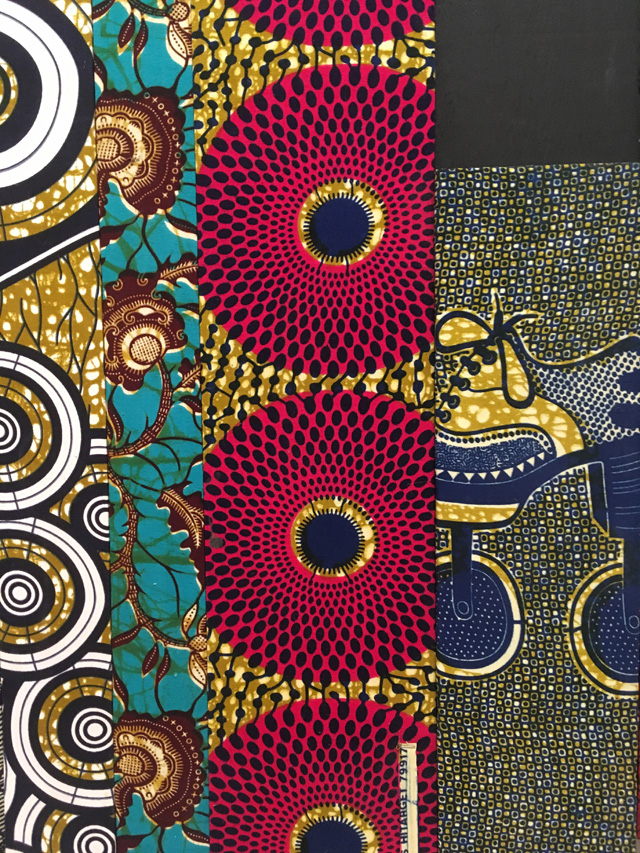 Through his practice, in its use of salvaged materials, the collection and deployment of archives, and the architectural, collaborative and regenerational nature of his processes and outcomes, Mahama seems to borrow much from Theaster Gates. But the clarity and intensity with which he deploys his materials and his message is exceptional. At 32, Mahama seems to fully earn his current BBC news billing as “one of Africa’s most exciting young artists”. 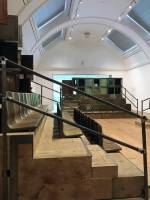 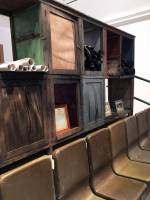 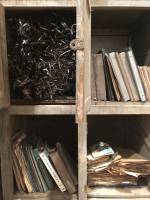 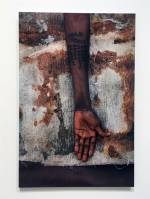 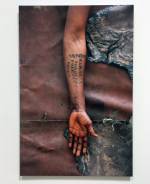 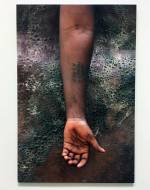 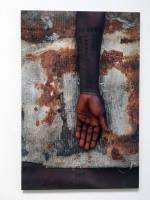 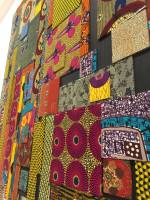