I am Ashurbanipal: King of the World, King of Assyria

I am Ashurbanipal: King of the World, King of Assyria 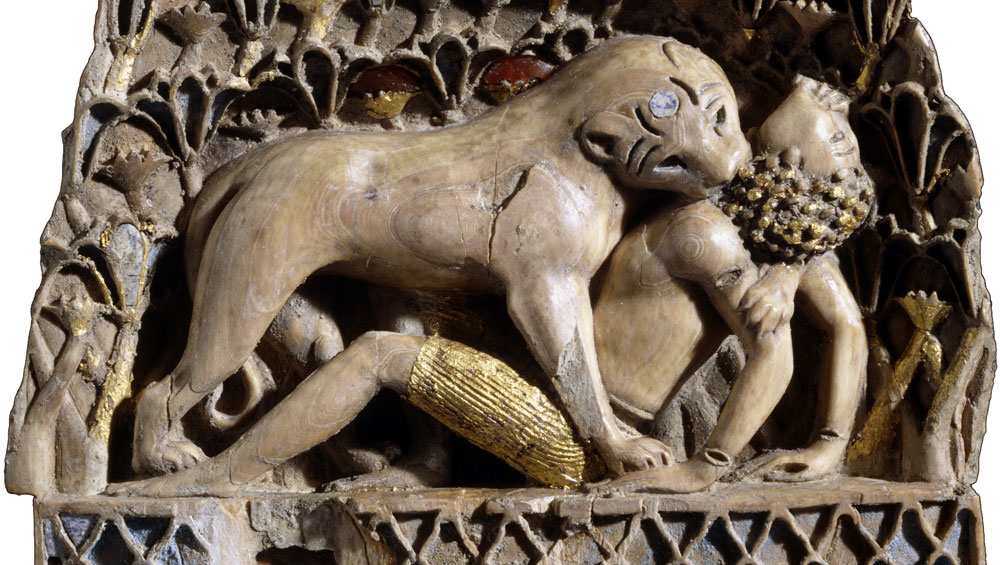 Meet King Ashurbanipal (669–631 BC), the brave and virile lion slayer. This exhibition really does make you feel sorry for the big cats of Mesopotamia; they seem always to be at the wrong end of a spear. A large carved gypsum panel that once lined the walls of Ashurbanipal’s ornate palace at Nineveh, in modern-day Iraq, plays the hunt out like a comic strip. The poor beast is released from a box, and lunges at the king, who, with a casual thrust of his spear, pierces it through its chest. The detail is extraordinary; the taut muscles of the cat’s powerful legs, its claws spread and tensed, the upwards swing of its tail. The artist has paid close attention to these animals and how they behave, how they hunt and fight. One fragment illustrates a lion vomiting blood after having been shot with an arrow, the veins on its face bulging with the strain. 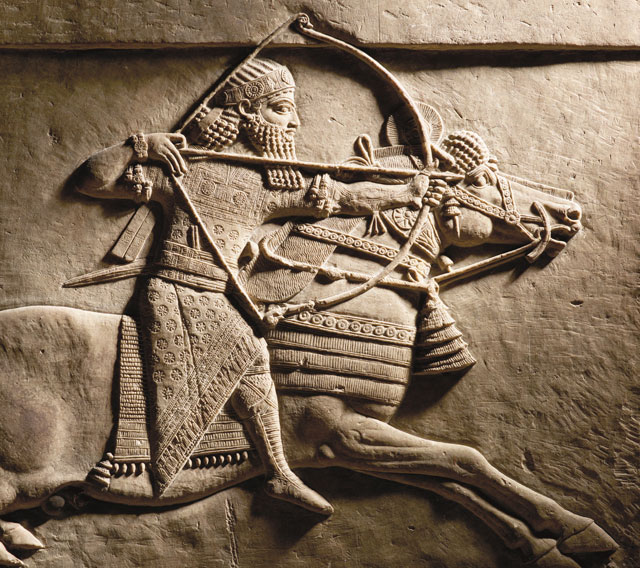 Relief detail of Ashurbanipal hunting on horseback. Nineveh, Assyria, 645–635 BC. © The Trustees of the British Museum.

To the Assyrians, lions represented chaos. By slaying the dangerous, unpredictable forces that lay beyond the city walls, the king could demonstrate his might and bravery. But Ashurbanipal was not one for riding into battle; he was not a warrior king, in fact he is most often depicted with a pen tucked into his belt. The greatest strength of this, the last great Assyrian king, was bureaucracy. He was a brutally efficient ruler who appointed eunuchs as civil servants (presumably so they would not be distracted from their duties) and employed a staggeringly efficient postal system that transported cuneiform messages written on to clay the length of the empire via a non-stop express service. 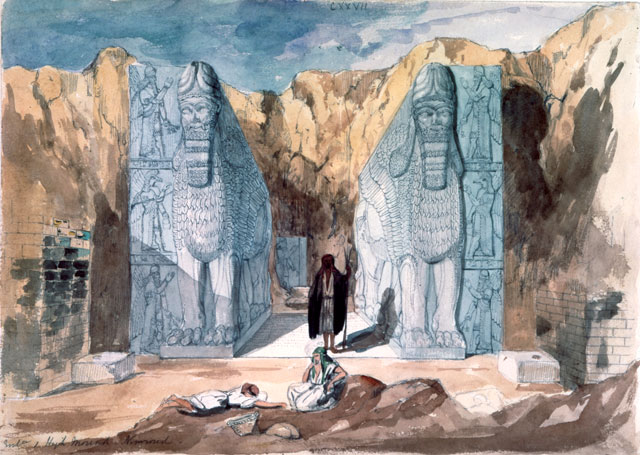 At its height, the Assyrian Empire stretched from Egypt to the Persian Gulf. Wars with neighbouring civilisations were inevitable as it expanded its territories, but for Ashurbanipal the biggest fight of his reign would be not with the Egyptians or Syrians, but with his brother. The touch paper to this family feud was lit when his father appointed him head of the empire, while his older brother, Shamash-shum-ukin, was given Babylon to rule. This was not the first time that an eldest son had been skipped in the line of succession, and both occasions ended in bloodshed. Shamash-shum-ukin tried to rise up against his brother, but Ashurbanipal crushed the rebellion and laid waste to Babylon after a gruelling two-year siege. Hungry for revenge and nothing if not thorough, Ashurbanipal then sought out those who had supported his brother’s uprising. Stone reliefs show the heads of those souls who picked the wrong side being carried aloft, back to the king in Nineveh. 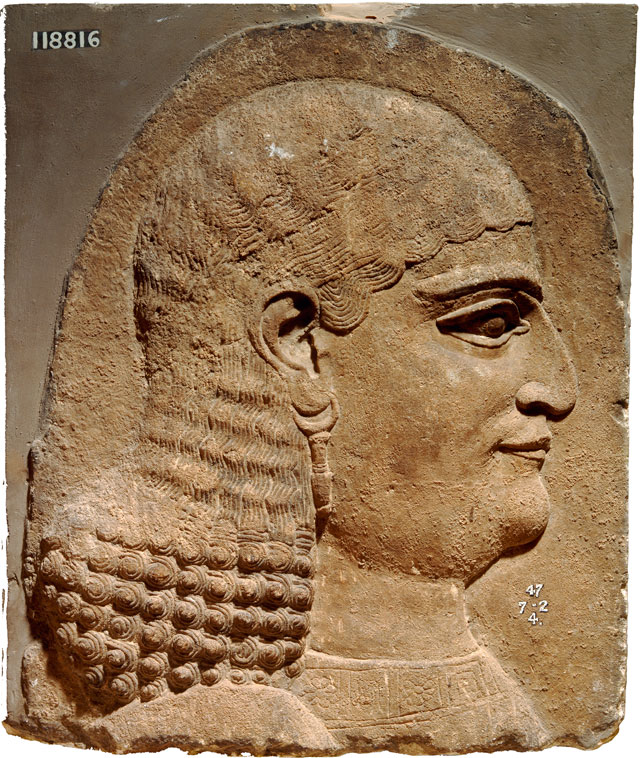 Fragment of a wall panel showing the head of a eunuch. Khorsabad, Iraq 710 – 705 BC. © the Trustees of the British Museum.

With his enemies vanquished, Ashurbanipal was free to relax in his newly constructed palace. He recorded this period of contentment, too, and is shown immortalised in stone with one of his queens, relaxing in a garden paradise, the head of an enemy king hanging from a nearby tree like some strange mango. After Ashurbanipal’s death – about which surprisingly little is known – Babylon got its revenge and sacked the city of Nineveh, looting its treasures and burning the great scholar-king’s library to the ground. The library housed all the knowledge that he had managed to collect from various scholars, alongside magic spells, correspondences, divinations and literature. But the fire that destroyed the building and its wooden roof baked the clay tablets, preserving a great many of them for posterity. It is from these surviving documents, a collection of which are on display here, that we know the epic tale of Gilgamesh, arguably the oldest known work of fiction. 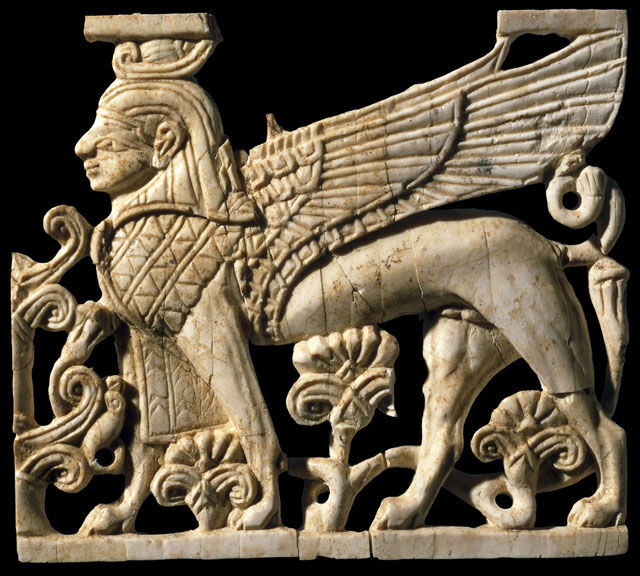 Striding sphinx. Fort Shalmaneser, Nimrud, Iraq 900 -700 BC. © the Trustees of the British Museum.

But history has a habit of repeating itself. Nineveh, part of which lies under the modern city of Mosul, has undergone further destruction since the Gulf war (1990–91). Invasions, bombings and lootings have taken their toll and between 2014 and 2017 Daesh (the Islamic State) did its utmost to wipe away the cultural heritage of Iraq, ransacking museums, burning libraries and dynamiting archaeological sites across the region. Thankfully, the Victorians had taken (with permission of the Iraqi government) a collection of choice artefacts, which now reside in the British Museum and, for once, we can thank them for it. There are loans here from across Europe, too, but precious little excavated archaeology remains in Iraq. It is a tragedy that is touched on in the final room of this exhibition, which also details the extraordinary resilience of Iraqi scholars and archaeologists-in-training, who are rebuilding the museum records. 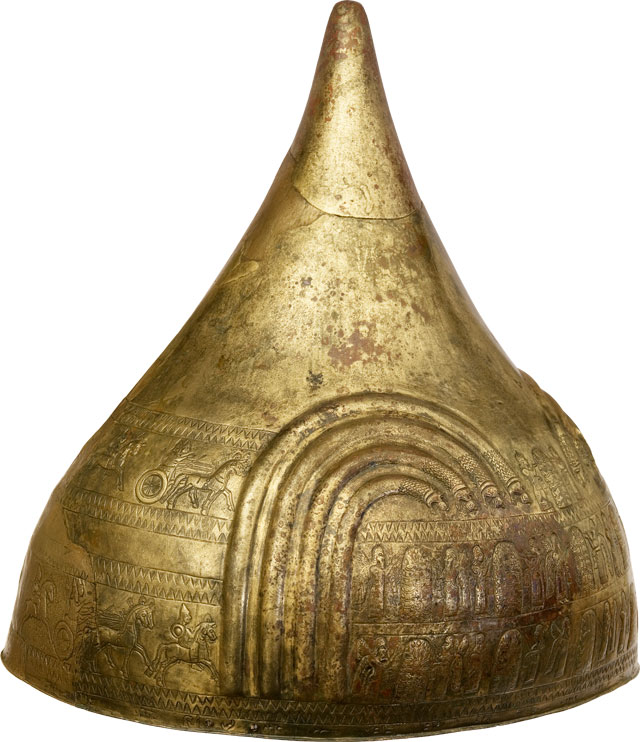 The Assyrian empire takes a back seat in the imaginations of most Europeans, if it features at all. But it was a kingdom to rival any other, an early civilisation with hugely sophisticated art and technologies. And there are many exquisite artefacts in this exhibition. An ivory plaque shows a young man, his head tilted back as a lion bites his throat. He is a beautiful youth in a golden tunic, elegantly realised and graceful in his last moments, with a face of almost serene surrender. (A second, almost identical version was looted from the Iraq Museum in 2009.) The carvings would probably have adorned a piece of furniture and they give a tantalising glimpse into the elegant world of the ancient near east. The palaces of Nineveh would have been festooned with such items, brought in from the far reaches of the Assyrian empire. It was splendidly coloured, the now naked plaques brightly painted and the walls bedecked with ceramic tiles. Rugs woven in floral motifs covered the floors and statues of protective spirits lined the halls. Once you have spent some time in this exhibition, head to Room 6 in the museum’s permanent display, where two such winged guardians stand before the gates that once opened on to the palace of one of Ashurbanipal’s predecessors. 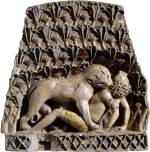