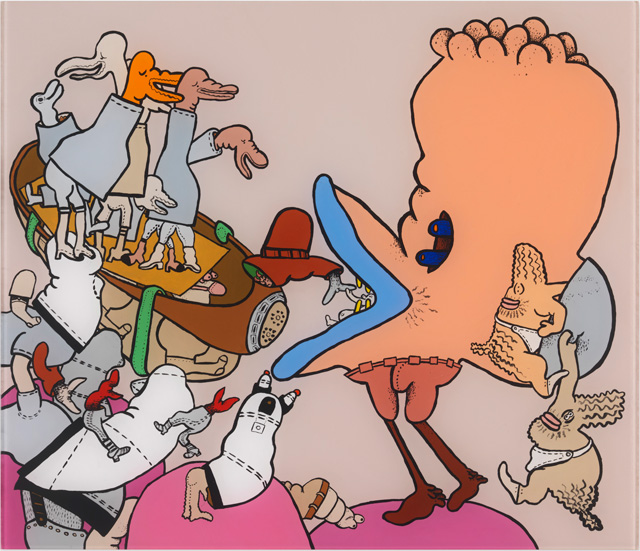 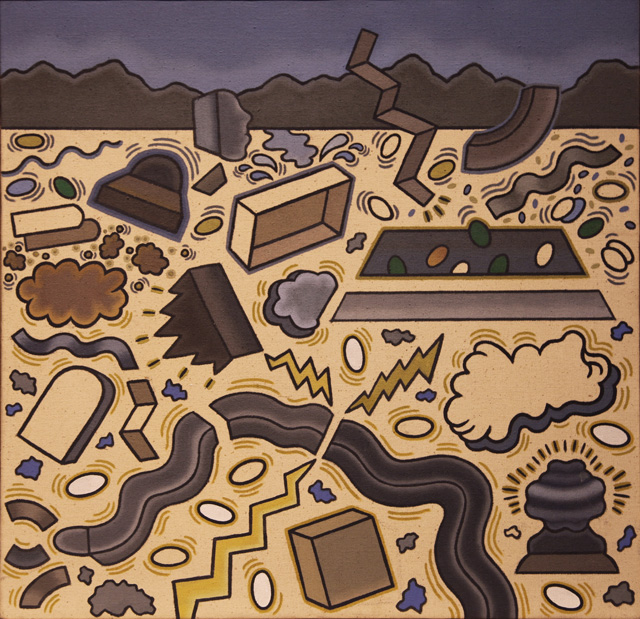 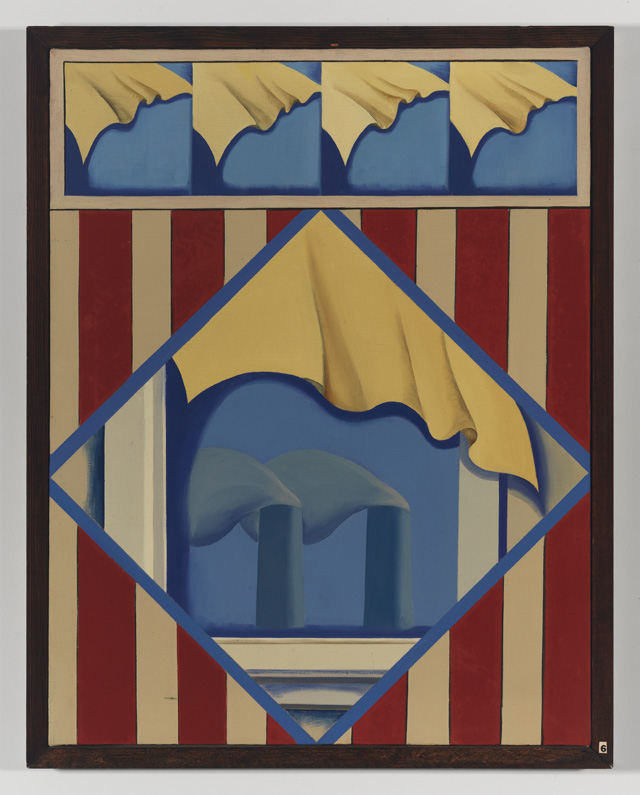 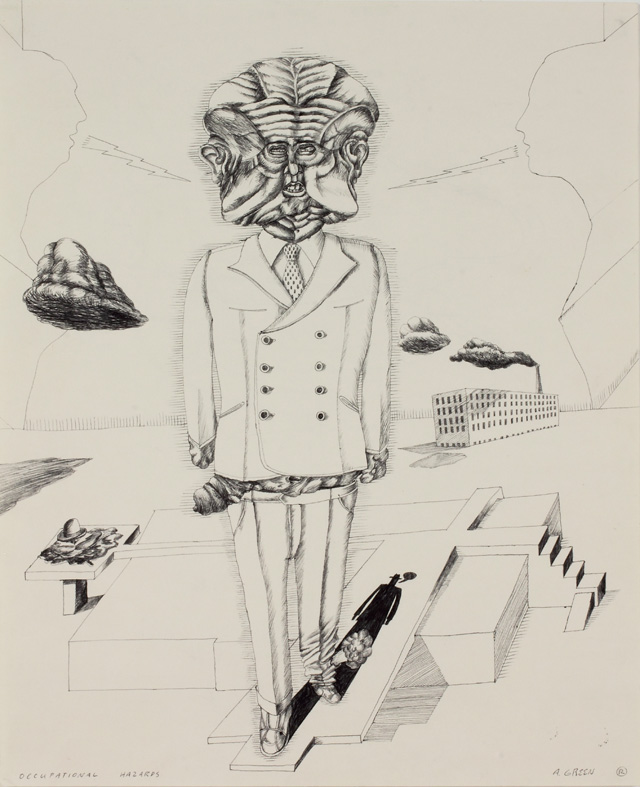 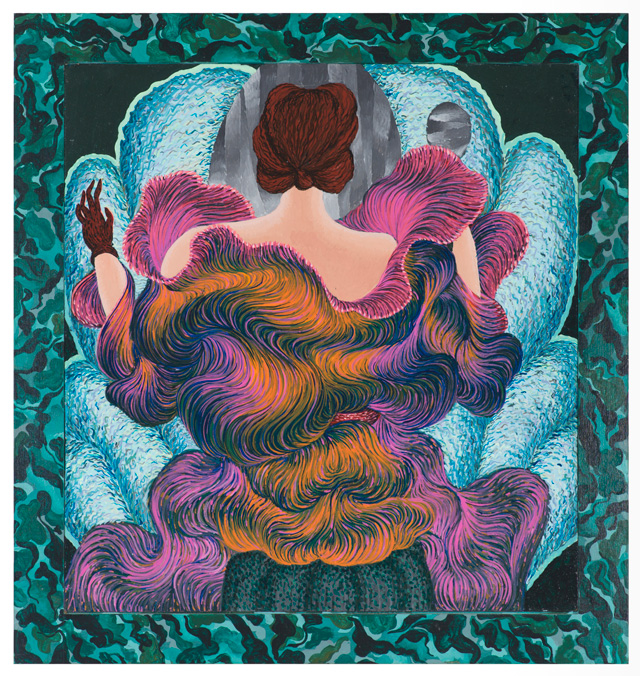 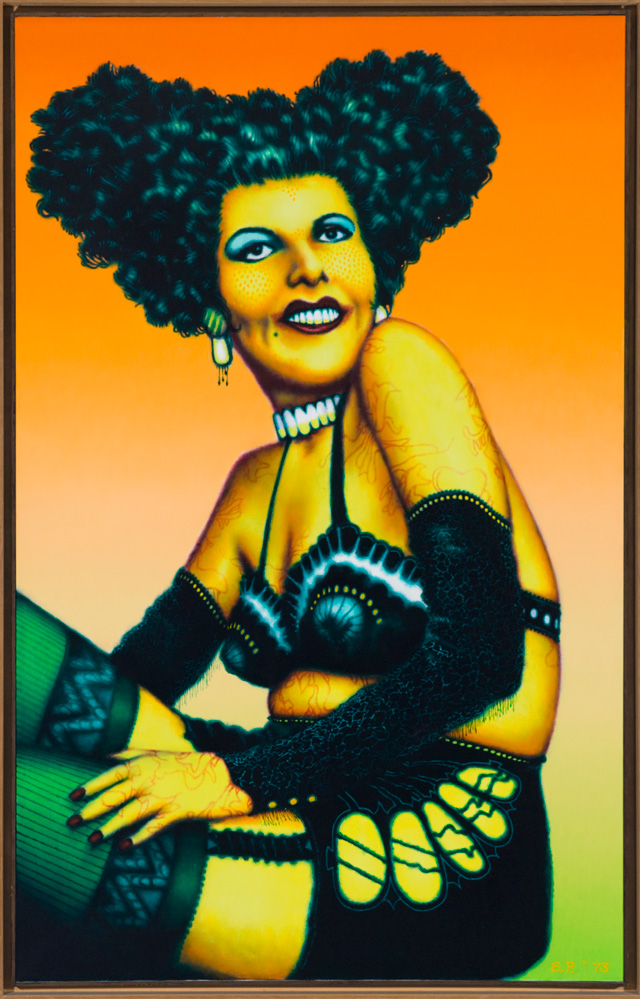 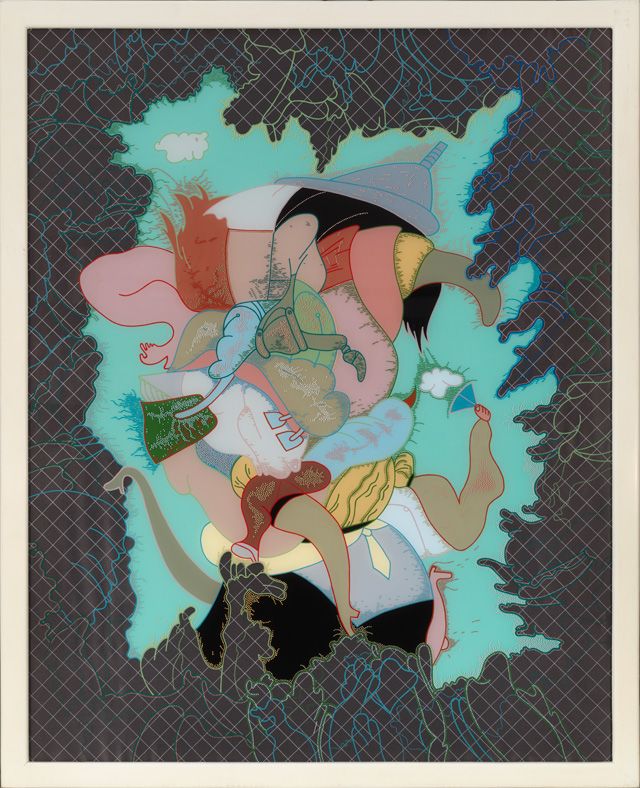 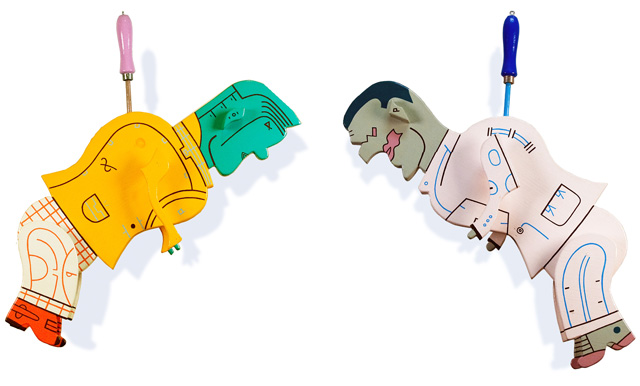 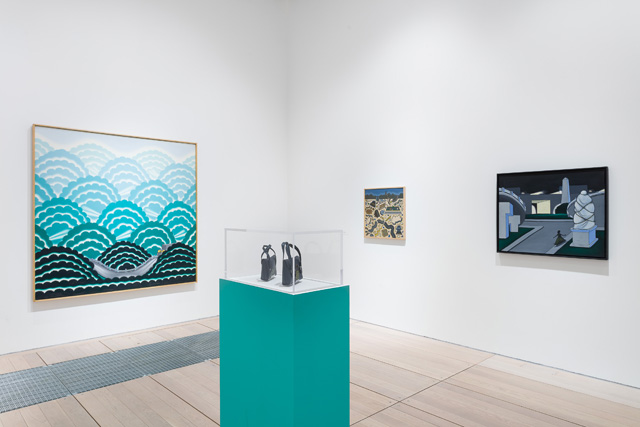 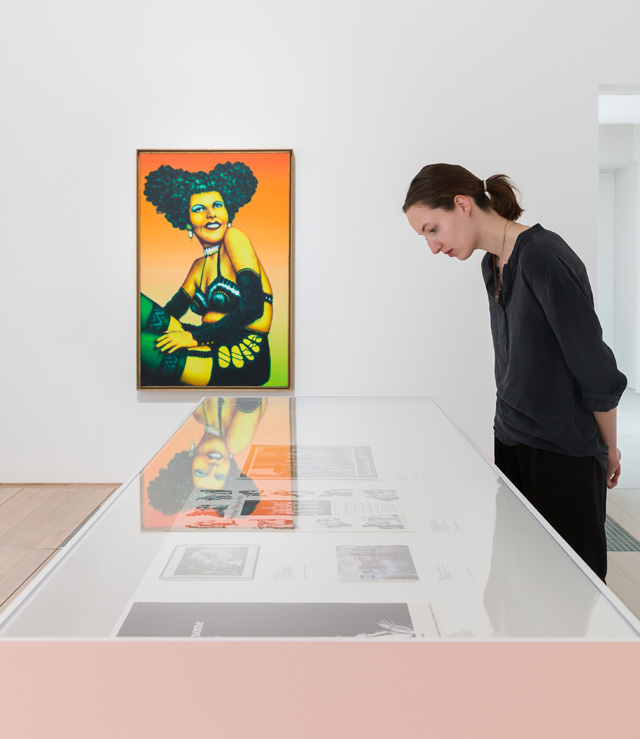 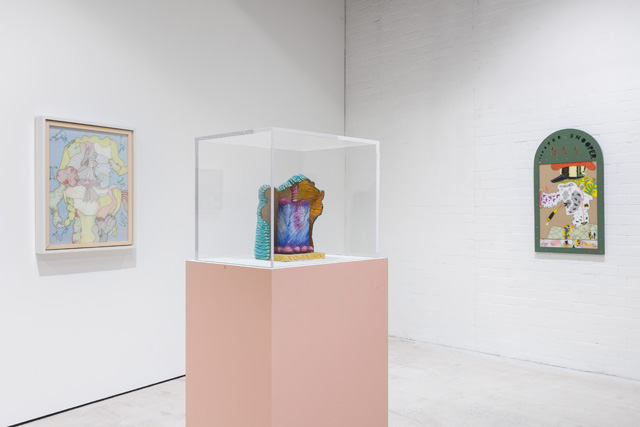 Chicago Imagists was a term that began to circulate through American art criticism in the 1970s. It applied to Chicago-based artist groups of the 60s and 70s – groups such as the Hairy Who, the False Image, Chicago Antigua and Nonplussed Some, whose actors, almost without exception, met while studying at the School of the Art Institute of Chicago. A key orchestrator in this scene was the Hyde Park Art Center’s then director, Don Baum, whose freewheeling curatorship immunised artists against the demands of an emergent gallery network. 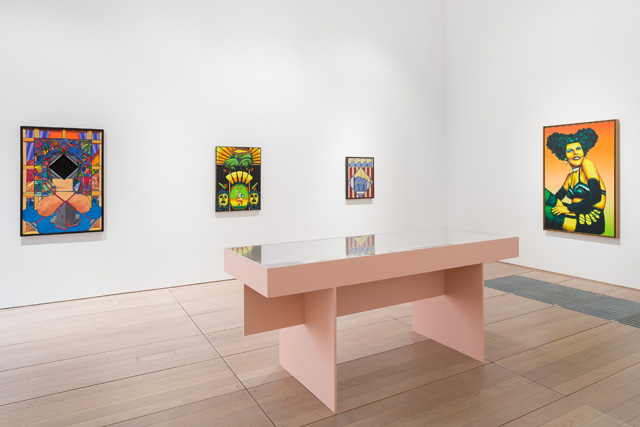 Walking around the pristine gallery rooms of Goldsmiths Centre for Contemporary Art, a paradox is manifested. These are museum-standard goods: exquisitely hung on the wall or laid out in brightly coloured vitrines, well preserved and amenable to sustained attention. Yet it is uncommon to encounter a group exhibition that so neatly subverts the model of individual authorship, at least one that prioritises the display of still objects over programming – although, in fact, an impressive lineup of events is planned. For what prevails is a feeling of in-jokes and falling-outs, of the baggage that attends any close-knit grouping raised to a zany, unimpeachable high. It could be an effect of the space, but individual differences seem to come second – and this is doubly surprising given the minimal inclusion of archival photographs. 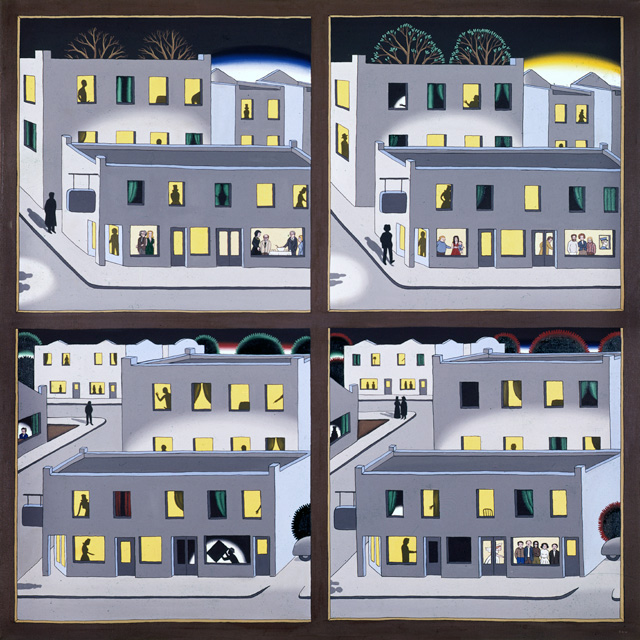 Roger Brown, The Four Seasons – A Benefit Painting of the Hyde Park Art Center, 1974. © The School of the Art Institute of Chicago and the Brown Family. Private collection, Courtesy McCormick Gallery, Chicago.

Take, for instance, Roger Brown’s 1974 work, The Four Seasons – A Benefit Painting of the Hyde Park Art Center. Four street views, shown in three-quarter perspective, are surreally contained by the quadrants of a window frame that is depicted in the immediate foreground. Through the window can be seen miniature group portraits, installed within the lurid yellow rooms of identical buildings in a seeming game of spot-the-difference. Brown invites his presumed audience to laugh at their mutual, caricatured friends. Thankfully, curators Rosie Cooper and Sarah McCrory, who must be applauded for producing this landmark exhibition, have indexed the names of those depicted. 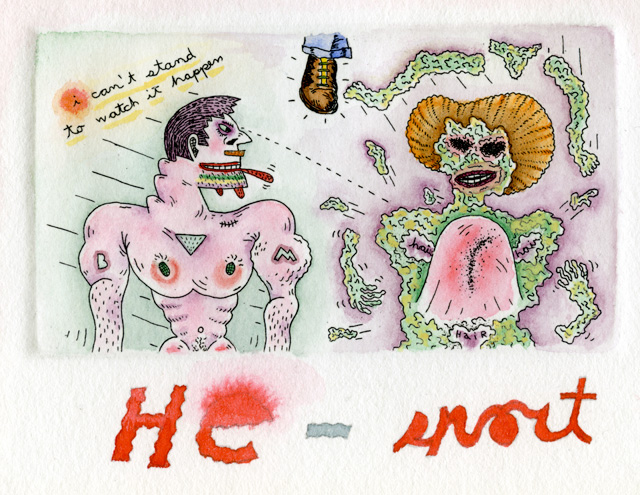 Group feeling is all contained in the work. A common visual language resides on the surface, but there is something else: the circumstance of a time and place located away from the artworld’s structural centre. My impulse, as a newcomer, is to think about what was happening in Los Angeles and New York. Stylistic congruities accrued through the 60s in both metropolises, yet these were comparatively formed through exhibitions and critics’ columns. Even in bohemian Greenwich Village work was conditioned by a growing art market. For instance, as Yvonne Rainer reflects on Robert Rauschenberg’s entry to the Off-off-Broadway scene: “Through no error in his behaviour but simply due to his stature in the art world – the balance [by 1964] was tipped, and those of us who appeared with him became the tail of his comet … The situation manifested itself in the change in the audiences (the power-oriented critics and dealers and glamour-oriented art-stars and collectors came en masse).”1

It is just this rivalrous, capitalising atmosphere that is missing from the Chicago Imagists, whose spirit, by contrast, expresses an art-school utopianism. In fact, Goldsmiths CCA’s stairwell is abutted by an internal window that looks on to a panorama of art studios – the university’s art school is adjacent. Stuffed animals and stage props are slung over one of the partition walls in what feels like an accidental vindication of the younger Imagists’ relevance today. This is a group formed from below, one that sought to distance themselves, albeit to varying degrees, from the postwar atmosphere of traumatic recollection associated with Monster Roster, the first-generation Imagists. 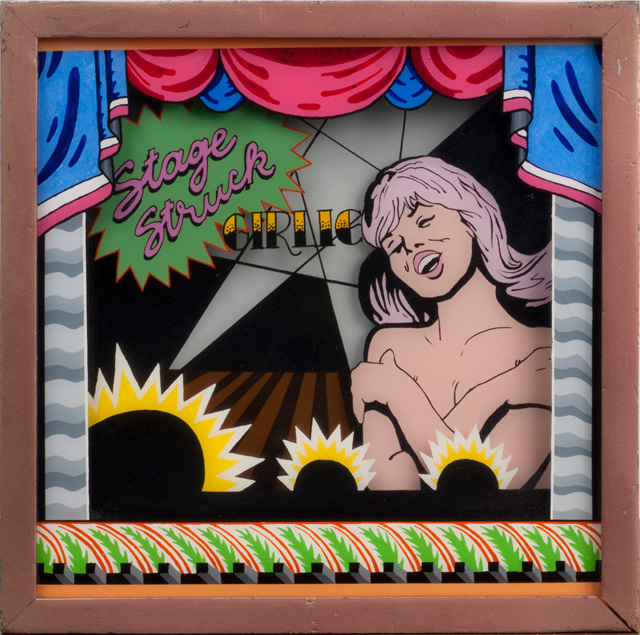 Artists featured in How Chicago! – Roger Brown, Sarah Canright, Jim Falconer, Ed Flood, Art Green, Philip Hanson, Gladys Nilsson, Jim Nutt, Ed Paschke, Christina Ramberg, Suellen Rocca, Barbara Rossi, Karl Wirsum and Ray Yoshida – were not part of the same cohort, but they shared an oppositional stance. In place of exhibition catalogues, the Hairy Who produced comic books riddled with word play and other inanities. The columns and walls of the Hyde Park Art Center were periodically lined in a flowery linoleum, undermining the normative conditions of the gallery space. Most patent, though, is the presence of a vernacular curiosity as seen in the work’s ubiquitous bright colours, quirky figuration, shiny Perspex layering and paeans to signage. This aesthetic has a different orientation to pop; less ironical, its attachment to Chicago’s streets is heartfelt. For the same reason, it avoids settling into a stale Americana. I find myself falling for the work against my better judgment.

Falconer’s Untitled (1966), for example, portrays a corpulent figure wearing pearls and a garment patterned with lily-of-the-valley. Though her frontal stance bears a lurid, Weimar-era charge, this is absorbed by a swirling cloud of primary colours, musical staves and word chains: “Love … Guts … We Just Love Your Paintings” ripples to the composition’s outer edges, its mysterious pronoun triggering another guessing game. Curators Cooper and McCrory were right not to organise the works on display into individual oeuvres. 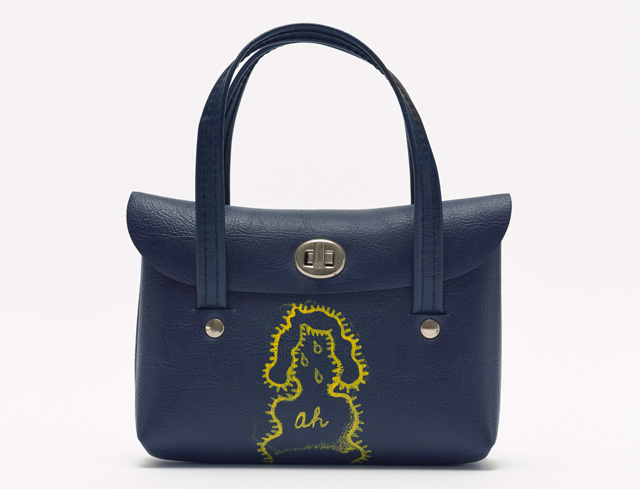 It is only when reading the exhibition catalogue, which features studies devoted to each artist, that individual styles are clarified. In her contribution, Lynne Warren, curator at the Museum of Contemporary Art Chicago, identifies one particular cell. Yoshida, we learn, taught at the Art Institute of Chicago and exhibited alongside his students, encouraging visits to Chicago’s flea markets and thrift stores. As Warren relates: “It is instructive to know that Yoshida and his pupils Suellen Rocca and Christina Ramberg filled sketchbooks with repetitions of, among other things, body parts or aspects of clothing: girdles and bras for Ramberg, rings and dresses for Rocca or in Yoshida’s case, segments cut from comic strips with which he fashioned paintings and collages.”2

This strategy was exceptionally generative, achieving a range of effects in the work of these three. With his “comic specimen” series of the late-1960s, Yoshida arranged cut-out hands and torsos into regularised lines, as if uncovering a system of notation. Rocca’s Bare Shouldered Beauty of 1965 performs the same kind of fragmented seriality, her hieroglyphic markings depicting a range of couplings in pastoral and domestic situations. Most interesting are the taxonomies of women’s underwear and hairstyles produced by Ramberg, whose subdued palette, detailed depictions of fabric and harsh cropping of feminised bodies work against the exhibition’s ebullience – a spanner in the flipbook.

Given the Imagists’ kinship, it is notable that they did not produce more exhibited work collectively. One exception is an exquisite corpse drawing made in 1974 by Ramberg, Yoshida and Rossi. Triple Twins comprises three sets of figures mounted on a floating board. Each pencil-coloured segment – head, torso, legs – receives a slightly different treatment, eliciting a play of fugitive visual effects. The combined work is incredibly flat; its economic spacing and delicate lines entreat the viewer to approach it as a blueprint or scheme to be acted on.

Cooper and McCrory’s inclusion of etchings, drawings and smaller works somehow brings the viewer in – look out for Ramberg’s Heads (1973). Fondazione Prada organised a similar retrospective in 2017 that, by contrast, zoned the larger works with uniform flowery wallpaper. The difference is stark.