What would a monument to Britain in 2022 look like? A motley crew of artists provide some surprising answers 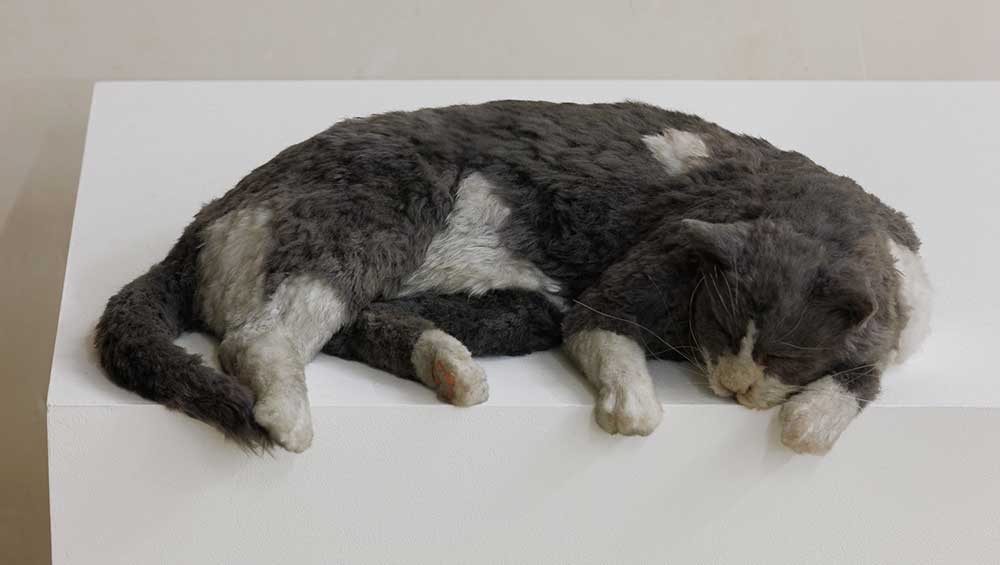 It is not a good time to be a monument. Since the Rhodes Must Fall campaign that gripped South African university campuses in 2015, memorial sculptures have found themselves under renewed scrutiny. Several have been torn down. In Britain, the most dramatic manifestation of this so far came in 2020, with the toppling of the bronze statue of Edward Colston into Bristol harbour. The monument commemorated Colston as a philanthropist. But he was also an executive of the Royal African Company, which held a monopoly on the slave trade. His dunking, 299 years after his death, showed that history is never a settled story – and nor should it be, despite what the reactionary right tried to claim in the incident’s aftermath.

Most monuments are an attempt to impose the values of its creators on posterity. It is small wonder that they have often been victims of righteous anger once those values are interrogated. But public sculpture also faces critique from those who feel that it misrepresents the person, people or virtues it is supposed to represent. You can’t please everyone. Sometimes you please no one. When Maggi Hambling’s A Sculpture for Mary Wollstonecraft was unveiled in 2020, it was roundly criticised: for failing to capture Wollstonecraft, for drawing on misogynist quotes, for being plain ugly (those in search of real ugliness should check out Hambling’s tribute to Oscar Wilde off Trafalgar Square). When I paused to consider it last summer, a passing local shared some choice words, ending with “… and it was made by a man!” Monuments create their own myths and invite a sense of shared ownership among those who have to live alongside them. 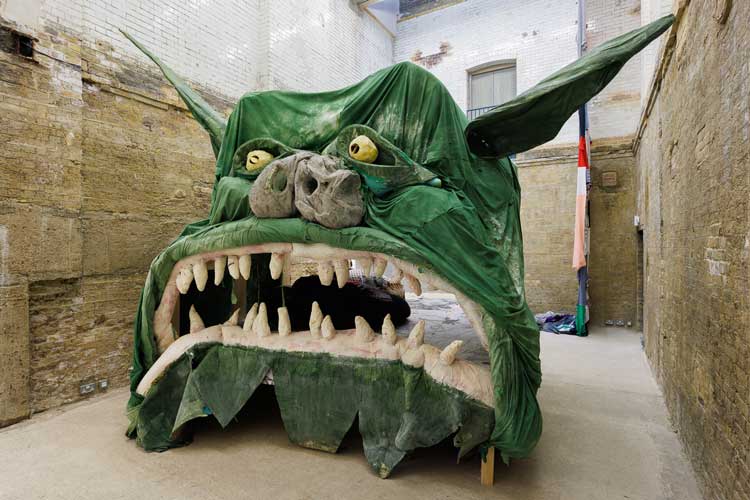 I don’t envy the artist commissioned to create monuments today. Luckily for them, a new exhibition gives them the chance to propose a monument for contemporary Britain in the security of Goldsmiths CCA. Testament is a teeming, diverting group show. Unusually, it has let its artists write their own wall texts, which lends some of the submissions the character of proposals. It will come as no surprise that the 47 submissions present a less than rosy picture of this sceptred isle. There is despair, anger, fear, frustration and alienation. Even a work that celebrates a type of joy – Monster Chetwynd’s A Monument to the Unstuffy and Anti-Bureaucratic (2019), for instance, a giant monster’s head filled with beanbags that, before the pandemic, would probably have been full of visiting children – defines itself in the negative. 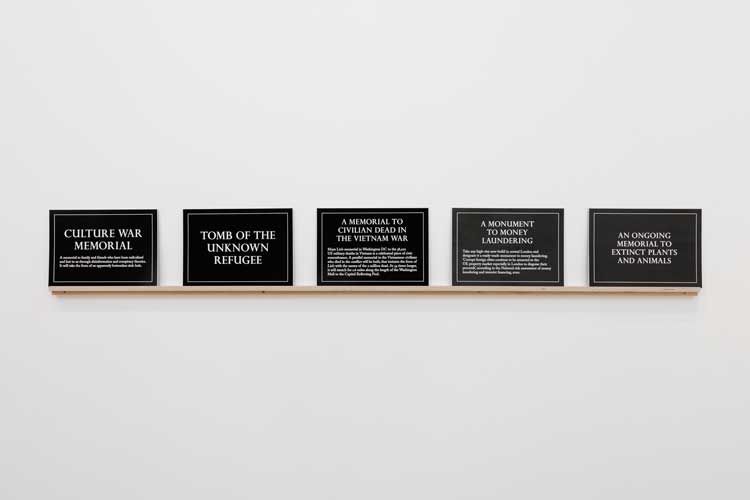 Monuments are almost always political and, unsurprisingly, many of the works here serve as a counterbalance to official conceptions of the state. Alfie White, in the text for his mural Portrait of Britain, writes: “This is Britain, a fragmented thing. A broken place, never really once whole; its cracks are deep and dark, and at the bottom filled with blood.” 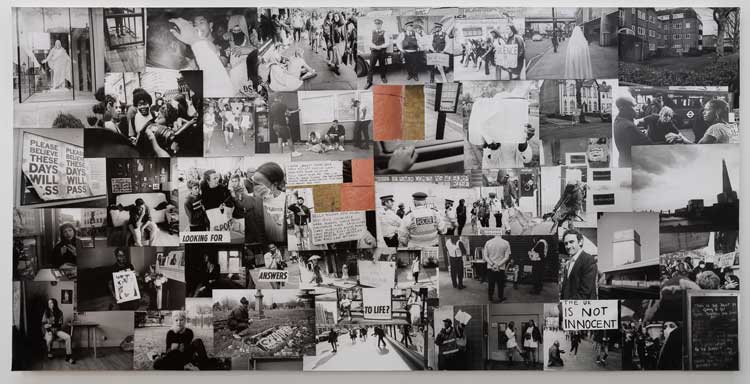 Yuri Pattison has plonked a UK Border Force passport desk on the gallery floor. Jeremy Deller presents plaques to accompany several fictitious artworks, including A Monument to Money Laundering and a Culture War Memorial (both 2022), among others. 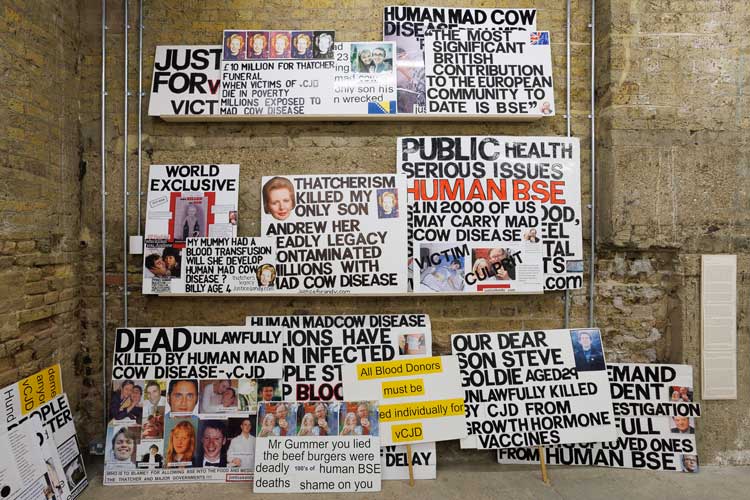 Rogers Hiorn’s memorial to the victims of variant Creutzfeldt-Jakob Disease, has a twofold presence. First, as a collection of placards spanning the BSE crisis; and second, as an artwork called Pathways, for a single sheet of sterling silver that will retain the scent of all those who visit it. Both raise questions about the nature of monuments. The placards ask whether something designed to be ephemeral can aspire to perpetuity, while the silver sheet asks whether a monument’s primary worth comes in the traces of those who honour it. Its physical form is just a place-marker; the commemoration that it inspires is the real monument.

The most interesting works here are the ones that raise questions. Ryan Gander’s contribution consists of a model of a stuffed cat on a plinth and a text. It serves as a sort of memorial for an unrealised artwork of his own. The original piece proposed introducing a Norwegian Forest cat to Bergen University College; it was rejected for what might broadly be called “health and safety reasons”. In a conversation with its commissioning curator, Sissel Lillebostad, Gander lays into the “wasteful, uneconomic” nature of public art: “Most ‘Public Art’ is art in public space as opposed to art for the public.” This insight holds true as much of the Victorian Colston memorial as much as for today’s sculpture-filled business districts and peace-making redevelopments. But it raises another problem: how does one make art for the public? The cat, according to Gander, was “perfect … beautiful optically … beautiful emotionally … It would have touched people, created relationships. It was domestic, and familiar and casual, and most of all, it was democratic.”

It may have been all these things. But who gets to decide whether a monument resonates? Does a monument need to resonate to thrive? The City of Westminster alone has more than 300 monuments, but I doubt many people feel much connection with them, especially in 2022, with its superabundance of visual stimuli and relentless drive for novelty. Sculpture all too often becomes just part of the scenery. Many of the artists in Testament have cast aside the traditional physical memorial for something that fits within our multimedia reality. Today’s monument might be a digital animation, or a short film, or a set of songs, like Carl Gent’s Mixtape for Julian of Norwich, which proposes a cassette full of tunes for the medieval anchorite (I doubt she would approve of Ariana Grande’s God Is a Woman. Like a Prayer, on the other hand, could be a hit if Julian misses the subtext). 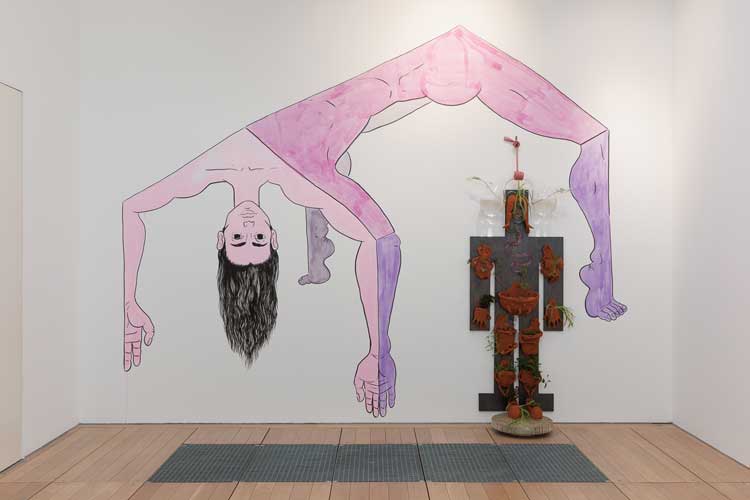 Relatively few of the artists here present plans for a sculptural monument. This is a shame: it would have been fun to force conceptual artists to imagine their work as something with a physical form in public space. I am sure they would have come up with more interesting ideas than much that actually gets commissioned. It also takes away something from the concept of the show. If, texts aside, Testament were preserved like Pompeii, its future discoverers would gain a pretty comprehensive idea of what contemporary art was like in the early 21st century. They might not learn so much about our complicated relationship to monuments, or White’s fragmented Britain.

Those artists who do propose monumental sculptures have thrown up some thoughtful twists. Navine G Khan-Dossos’s BLE is a tree-like proposal for a monument to contract-tracing: something that has proved valuable in dealing with the Covid-19 disaster but also represents a very real risk to our privacy: an ambivalence that sets it apart from the narrative-controlling sculptures of the past. Rabiya Choudhry’s The Lost Ones imagines a 4.3 metre (14ft) statue of a burning candle that serves as a symbolic vigil for those who feel vulnerable at night, a monument that tackles anxieties of the present rather than marks a person or thing from the past. 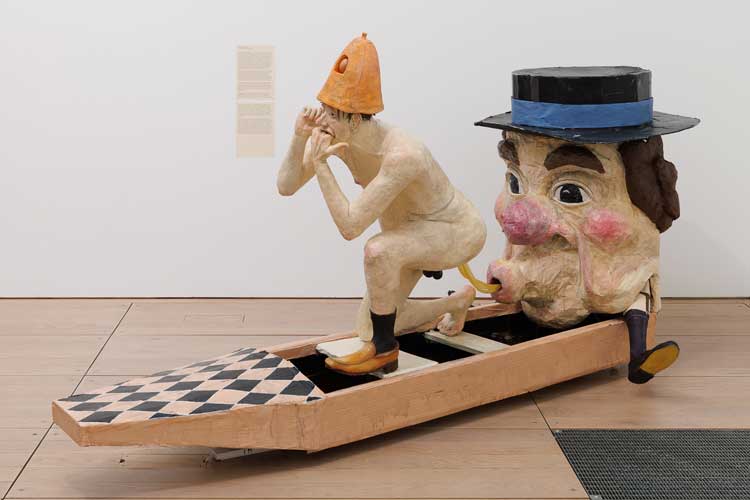 Then there is Dominic Watson’s papier-mache sculpture England, Their England, Testament’s grotesque capstone. An almost-nude David Cameron kneels on a punt, his face wracked in agony, as gunky fluid is sucked out of his anus by a hideous bodiless head, like something from an X-rated version of Punch. Watson imagines a mythic ritual in which an outgoing prime minister undergoes a primitive form of colonic irrigation to flush away all the wrongdoing they have done in office. I don’t think (and I’m sure Watson agrees) that a mere flushing out, even a long and painful one, would be anywhere near sufficient to cleanse Britain’s recent prime ministers of their crimes and misdemeanours. But perhaps this is the point: whether in importance or infamy, monuments are often poor substitutes for the real-life they attempt to immortalise. 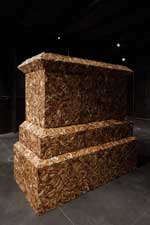