For those hoping to see the shared sensibilities and sensitivities of two of the world’s most famous artists, disappointment may be in store: the similarities explored are mostly superficial and the exhibited work is 90% Hockney 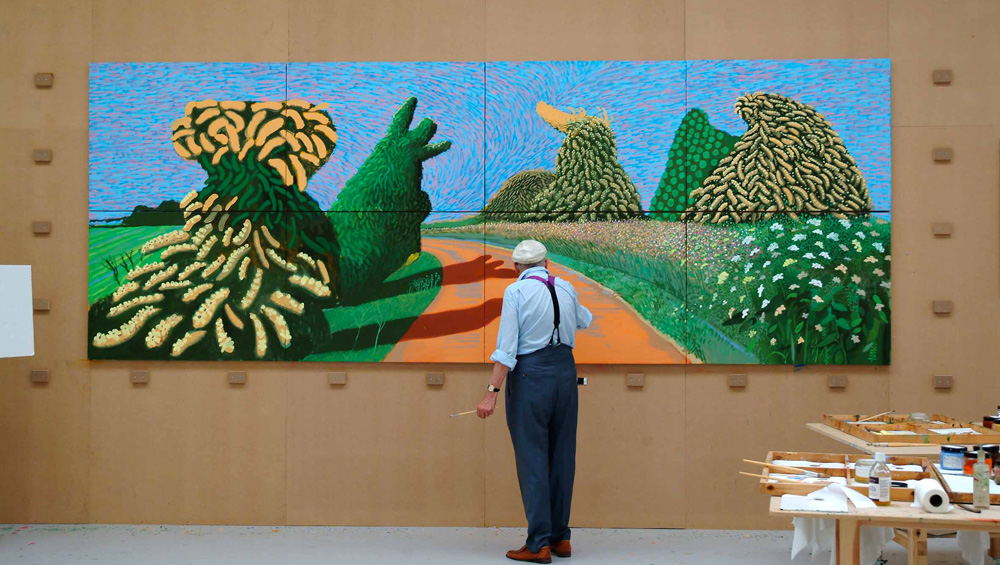 Hockney, Van Gogh and nature: a promising trio of ingredients, you would think, combining the 19th century’s most influential artist with one of the 20th century’s and a subject matter about which both were passionate. Visiting Tate Britain’s retrospective of David Hockney (b1937, Bradford) in 2017, which included the huge, multi-panel landscapes he painted or conjured with the help of his iPad during a nine-year stint living back in Yorkshire, I enjoyed the expressionistic intensity of his digitally enhanced colour palette, the experimentation he had clearly relished through the instant gratification of his Brushes iPad app; the collaged video footage of a Yorkshire road taken from multiple angles - a road he drove down in all seasons, capturing the changing scenery, colours and mood - which ended up in the Four Seasons, Woldgate Woods (2010-11), a screen-based environment I could easily lose hours in.

Vincent Van Gogh (1853-90), of course, painted nature like nobody had before him. The brushstrokes convey the presence of subject and object with such intensity - whether depicting wheatfields, trees or the brilliance of starlight on a dark night – that they give his landscapes an almost hyperreal presence. But what are the emotional resonances between the two artists and their affection for – or even obsession with – nature? What sensibilities and sensitivities do they share, these two very dissimilar characters: the one, a dapper, likable, self-professed “cheeky” Yorkshireman; the other a moody, increasingly manic, ultimately suicidal Frenchman

If I was hoping to find answers to these questions in the Van Gogh Museum’s The Joy of Nature, I was initially disappointed. Despite the exhibition’s pairing of the two artists in the title, it is really a monograph on Hockney; apparently the first solo show for him in the Netherlands. And, at times, it feels as if the museum is bending over backwards to demonstrate to Dutch visitors why Hockney warrants their attention, overegging the similarities and flagging up Hockney’s debt to Van Gogh in somewhat trite texts and soundbites.

The similarities our attention is drawn to in this show are often superficial: for example, a shared a love of trees. “I’ve noticed trees don’t follow the rules of perspective. They’re so complicated,” says Hockney in the short introductory film that kicks off the show. In the adjoining gallery, we see Hockney’s trees in great quantities – a whole glade of skinny specimens stretched along the wall in The Arrival of Spring in Woldgate, East Yorkshire, in 2011 and another wall-length, wooded quartet: Woldgate Woods (6 and 9 November, 2006 and 30 March and 21 April, 2006). They are exhilarating in scale, mesmerising in Hockney’s acute articulation of pattern and light, sometimes startling in their use of colour.

But one small and eloquent, adjacent oil painting of Van Gogh’s, Undergrowth (Kreupelhout, 1889), seems to pack more punch than all of these Hockneys put together. Painted in the back garden of the asylum in Saint-Rémy, Van Gogh’s trees are haunted, limbless, their trunks so dark it is impossible to know where trunk ends and shadow begins; they can, knowing his circumstances, be read as prison bars, forcing his gaze down into the complexities of the roots, leaves and branches on the forest floor.

In contrast, Hockney’s gaze is always drawn to the horizon. Even in the neighbouring painting Under the Trees, Bigger (2010-2011) the sky is present, gleaming brightly over the treetops to the right or shimmering through the leaf canopy, illuminating the carpet of pale yellow flowers. Hockney’s landscape paintings are almost always heading somewhere – the horizon is visible, a road always carved through the vegetation. The handful of Van Goghs (a mere eight) selected as companions to the Hockneys favour a much narrower focus – a patch of field, a grass verge, a slice of undergrowth; for Van Gogh, this is universe enough.

Perhaps to make up for the absence of the Dutchman’s actual work, in the introductory film Hockney is shown leafing through Van Gogh’s letters, reading out excerpts as they catch his eye. “Not everything I do is a success, but the work is getting along,” he narrates, with a chortle. He can relate to that. Then he tells us: “I’ve painted for 60 years now. I’m still painting and I’m still enjoying it enormously, and Van Gogh enjoyed painting. He did … They are full of joy, aren’t they?” he says. Full of joy? That is debatable. Joy seems in particularly short supply in Van Gogh’s wintry treescape The Garden of Saint Paul’s Hospital (Leaf-Fall) (1889). Full of emotion, definitely – a more complex range of emotions, surely, than in Hockney’s almost childlike explorations, however brilliant. “He saw more than other people,” Hockney tells us. “He saw space very clearly.” There’s no doubting that his interior landscapes were also more vivid.

Now 81, Hockney came to landscapes late in life, as he says in the introductory film: “When I started landscapes in 2004, landscape was seen as something you couldn’t do today. I thought: why - because the landscape became so boring? It’s not the landscape that’s become boring, it’s the depictions of it that have become boring – you can’t be bored with nature.”

This show of more than 60 of his large works, and many more smaller ones, shares a great deal of Hockney’s process in embracing this antique subject. Rather bravely, on the first floor he displays a series of 36 preliminary watercolours of wheatfields, plump clouds, haystacks and meadows, roads frilled with vegetation (Midsummer, East Yorkshire, 2004). They are amateurish in their simplicity, and their naturalistic palette; they certainly show the influence of Van Gogh in subject matter. A pair of larger, later oil paintings continue in that same vein, with slightly more panache (Kilham to Langtoft II and Woldgate Vista, both dated 27 July 2005). Into this area the museum has placed a couple of quietly extraordinary meditations on the same subjects by Van Gogh, including The Harvest (1888), which seems to capture the very dust and scent of a sunny day during harvest time.

While Hockney’s early attempts inevitably suffer from comparison to the 19th-century Dutch master, around the corner is a treat (also seen at Tate Britain’s retrospective, but no less enjoyable second time around): a series of 25 charcoal drawings by Hockney, alongside some rare sketches of Van Gogh’s. The landscape seems fully alive in Hockney’s drawings, depicting all the subtle shifts in seasonal and diurnal light, despite the restrictions of his monochrome palette. Hockney’s return from Los Angeles to Yorkshire also meant a return to a temperate climate, and his relish in experiencing the dramatic changes of the same landscape through the year is tangible; in these drawings and the many works nearby, there is a real sense of freshness and discovery in this constant cycle of renewal and decay. Curator Edwin Becker compares the visceral impact for Hockney of arriving back in Yorkshire from LA to Van Gogh’s move from Paris to the south of France; the contrasts of light, colour and land forms forced them to focus more closely on the natural world around them.

Having interrogated and explored key landscape traditions, Hockney gets bolder and more confident. We see this transition here, as his experiments with colour become freer - there are references to Munch in the purple and black tree and forest-floor tones of Felled Totem 1 (2009), with its virginal, white truncated tree limb and base. He also starts playing with new technologies, famously the iPad. As with the Tate Britain show, we are given a speeded-up depiction of one of his iPad paintings on a screen on one wall, while opposite we are treated to the static version, on the left of another huge triptych, The Arrival of Spring in Woldgate, East Yorkshire 2011 (twentyeleven); 18 December, 29 December and 14 May.

Hockney’s paintings, like Van Gogh’s, celebrate and transform ordinary, everyday vistas, but these iPad-inspired landscapes do so with a full brass fanfare, inflating and expanding our senses through scale and distortions of colour and plane. Tucked behind these technicolour symphonies, placed against a pillar, is one of Van Gogh’s celebrations of the ordinary: Wheatfield with Partridge (1887); a quiet, introspective chamber sonata whose seductions are more profound and lasting.

There are those who dislike Hockney’s iPad-enhanced later landscapes; the Guardian’s Adrian Searle, for example, described them as “an artistic disaster”. There is less invested in their creation, perhaps, which translates into something emotionally distancing about their flattened perspectives, and jarring about the sheer technologically assisted quantity, the speed at which they are despatched. What might be going on beneath the surface, provoking this obsessive output? Hockney embarked on these landscapes shortly after his mother’s death in 1999. Perhaps they are not as sunny as he makes out. Through this intense, repetitive, almost frantic activity it is as if he is trying to ingrain the landscape of his youth on his brain - and himself on the landscape. Might these urges come from the sudden realisation of his own mortality that a parent’s passing is often said to bring? Nature has been serenaded in poetry and song as a solace for the grieving. For Van Gogh’s tormented mind, work was clearly a vital distraction and a balm, and nature an endlessly fascinating and rewarding subject. A passing comment from the Van Gogh Museum’s senior curator, Louis van Tilborgh, sticks in my mind: he mentioned that Van Gogh’s final paintings were made at a time of intense loneliness. All of the Van Goghs in this show are from the last three years of his life. Could it be that loneliness is what the cold, mauve light and the isolated, upreaching trees of Hockney’s wintry landscapes are conveying – or that the relentless cycling through from winter to spring and summer is an effort at displacing those fears?

Later in Hockney’s filmed monologue, he allows a less-than-upbeat depiction of Van Gogh: “He was a miserable man in a way, but not when he was painting, he wasn’t. There’s love in these paintings, isn’t there?” Indeed there is - and a quest for some sort of legacy. But my hunch is that these digitally birthed Hockney landscapes, in 130 years’ time, are unlikely to be giving as much pleasure as the Van Goghs still do 130 years after he painted them.