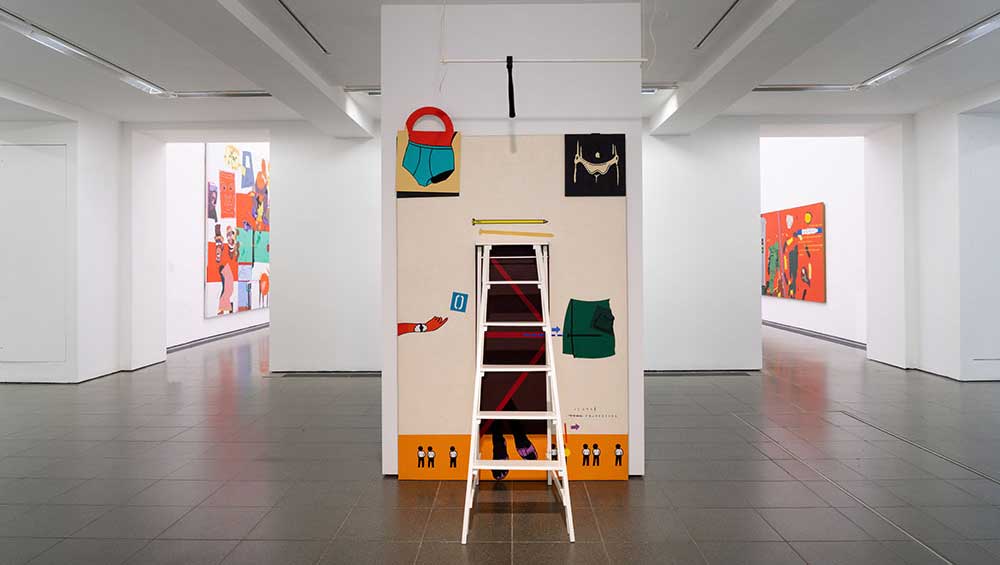 As the automatic doors swing open at the Serpentine Gallery, you would be forgiven for wondering if this exhibition was still being installed. Yet the stepladder that immediately greets you belongs not to a gallery technician, but to Hervé Télémaque’s Confidence (Secret), 1965, an autobiographical work that combines painting with sculptural elements and found objects. The white ladder looks inviting, though a black line on the floor suggests it is not for climbing (a hammer hanging precariously overhead is another deterrent). That black line is echoed throughout the work by the Haitian artist’s striking “ligne claire” comic-book style, which depicts with graphic simplicity various items, including a pointing hand, a long yellow nail, a girdle and a pair of blue underpants. As with many of Télémaque’s works in this long-overdue retrospective, it appears like a code waiting to be deciphered. 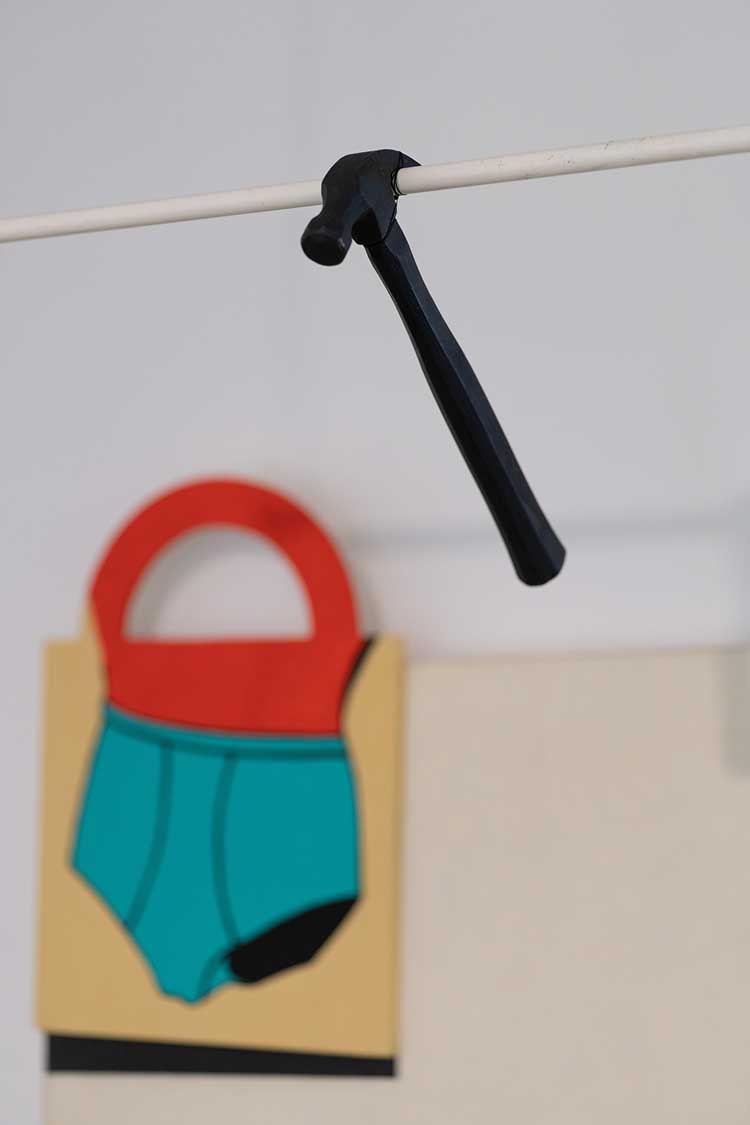 Télémaque was born in 1937 in Port-au-Prince and left for New York when Haiti’s despotic ruler François Duvalier came to power in 1957. In Manhattan, he studied at the Art Students League under the painter Julian Edwin Levi, although he was most influenced by abstract expressionism, which he lapped up and made his own with works such as L’annonce Faite à Marie (The Announcement to Mary), 1959. Here, gestural marks mingle with semi-figurative daubing and graffiti-like scrawls that prefigure Jean-Michel Basquiat by decades; the work’s title implies an annunciation, yet the painting seems dedicated to his wife, Maël Pilié, whom he had married that same year and whose name appears on the canvas in prominent yellow lettering. 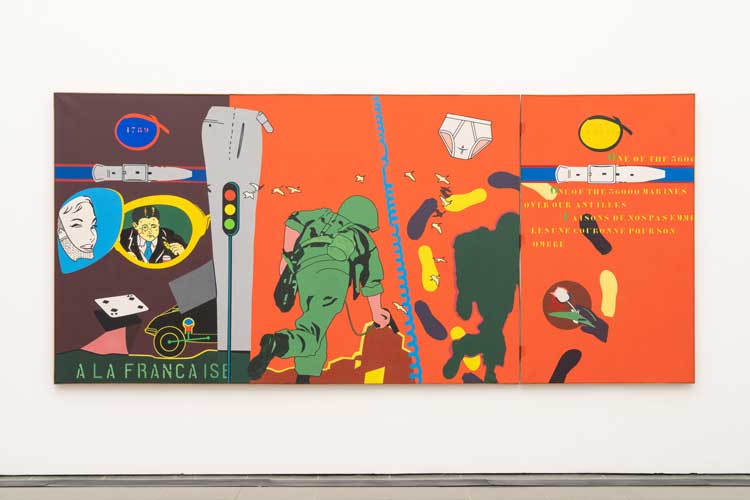 Feeling limited by this style of painting and perturbed by the racial discrimination he encountered in the US, Télémaque moved permanently to Paris in 1961, where he associated with the surrealists before co-founding the narrative figuration movement with the art critic Gérald Gassiot-Talabot and the artist Bernard Rancillac. This period saw him producing politically charged paintings that combined a pop art sensibility with references to world events, including the cold war and the Cuban missile crisis. One of his most overtly political works from this era is the large, colourful canvas One of the 36,000 Marines Over Our Antilles (1965), which directly addresses US President Lyndon B Johnson’s attempt to forestall the formation of a communist regime in the Dominican Republic. 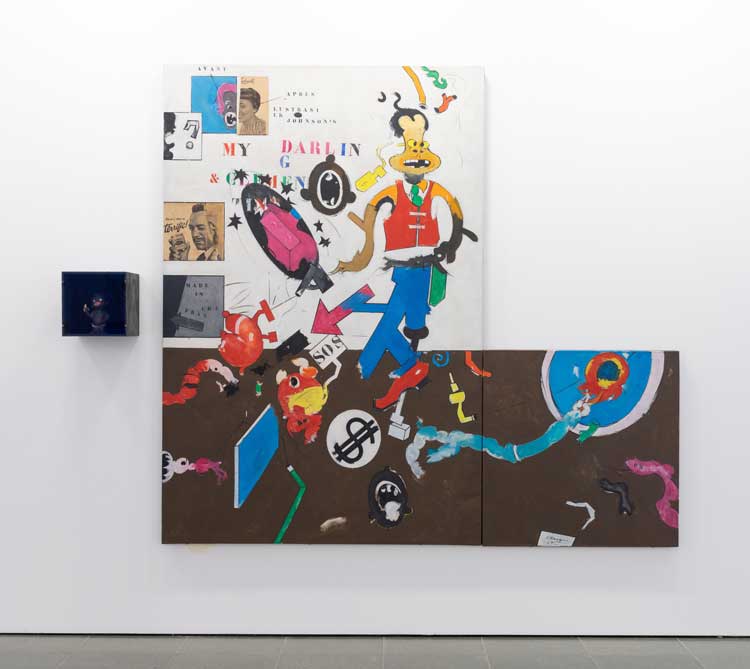 If Télémaque was appalled at the prejudice he experienced in the US, he was evidently enraged by the racist aspects of French society he witnessed in Paris, which he considered far more insidious. His Banania series, for instance, tackles the embedded racism within popular culture with its references to the “Bonhomme Banania”, the derogatory colonial era image of a black man wearing a fez that was co-opted by one of France’s most popular brands of hot chocolate. In Banania I (1964), the character is accompanied by a perplexing array of images, from kitchen utensils and weapons to cartoon hands and unidentified forms. In My Darling Clementine (1963), Télémaque paints himself as a dishevelled cowboy flanked by racist advertising material, including a figurine of a black boy holding a banana. This offensive caricature evokes the opening lines of Frantz Fanon’s 1952 book Black Skin, White Masks, in which the French postcolonial theorist reflects on his experience as a person of colour: “I found that I was an object in the midst of other objects.” 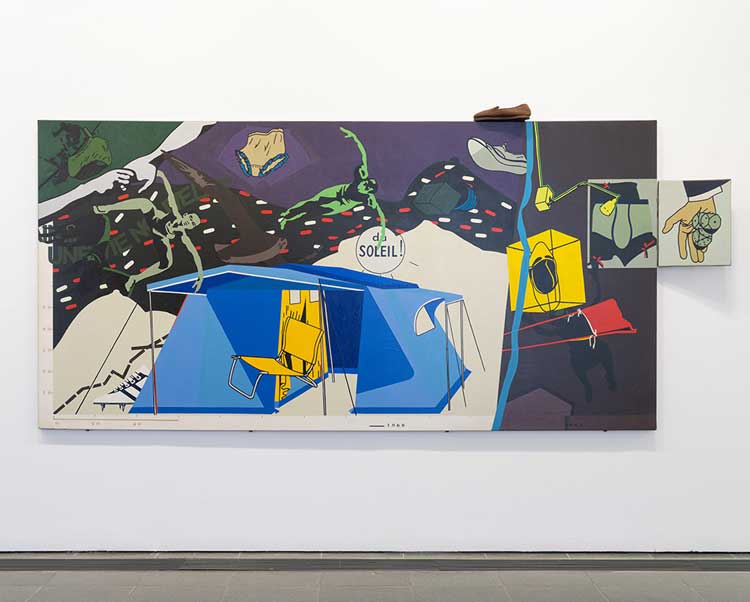 With 28 works, this show is less ambitious than the artist’s comprehensive retrospective at the Pompidou in 2015. There are, of course, space limitations at the Serpentine, but the proliferation of works from the 1960s gives a slightly lopsided view of Télémaque’s oeuvre. His painting style of those years – arguably his most interesting period – bears a striking resemblance to the work of the British painter Patrick Caulfield, though it is the Belgian cartoonist Hergé to whom his art is more indebted. Considering that the Tintin creator was accused of racism for his depictions of Congolese people in his 1931 book Tintin in the Congo, Télémaque’s appropriation suggests a critical engagement. Yet the artist has said that he is an admirer of Hergé’s work. 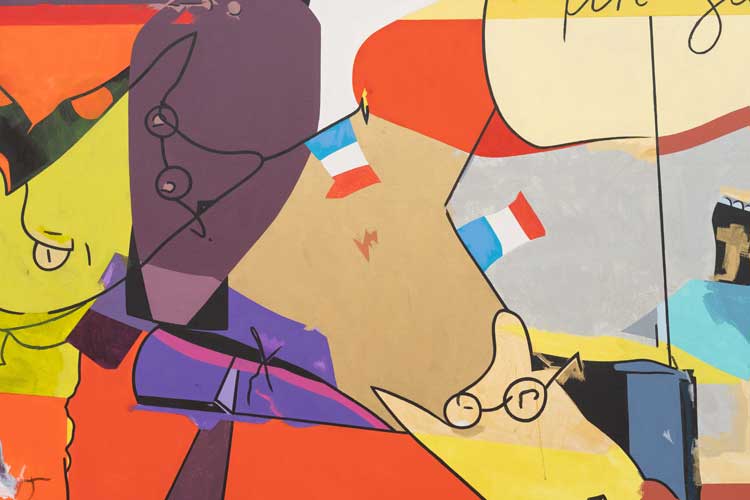 Ambivalence characterises much of Télémaque’s work, especially his social commentary. Take, for instance, Fonds d’actualité, nº1 (Current Affairs, no 1), 2002, which was painted after the re-election of President Jacques Chirac in a landslide victory against National Front candidate Jean-Marie Le Pen. Amongst the painting’s jumble of references are caricatures of Chirac lifted from Le Monde, an image of a voting ballot and a homage to Jacob Lawrence’s Migration series (1940-41) with its shocking representations of lynching. As with so many works in this show, its meaning is provocatively ambiguous. 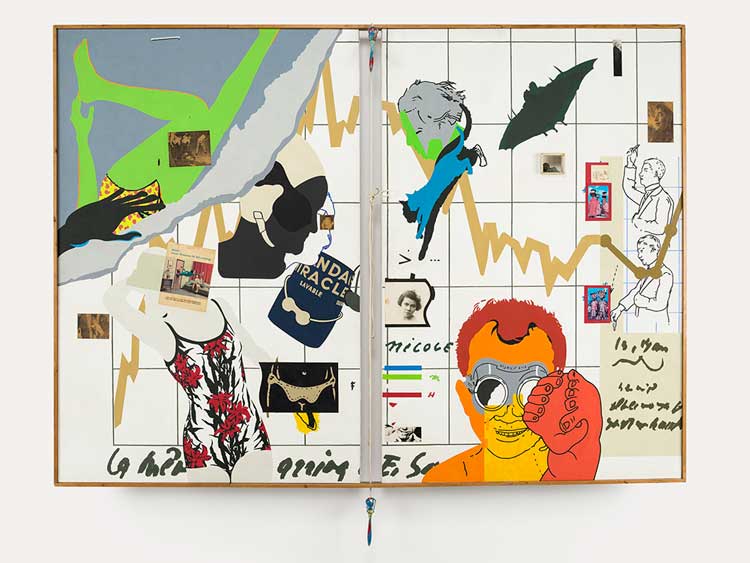 Autobiography remains central to Télémaque’s oeuvre, and it is the artist’s mingling of the personal with the political that accounts for an intriguing yet often baffling visual lexicon, which seems rooted in the nether regions of his psyche. The Serpentine’s curators have provided a generous gallery guide with explanations of many works. There is also the Bloomberg Connects app to aid interpretation. We learn, for instance, that the nails seen in several works refer to a childhood injury that Télémaque sustained to his hand, while the girdle from the show’s opening gambit refers to a hernia suffered as a teenager that stopped him competing as a high jumper. But the artist’s paintings, sculptures, collages and assemblages are so rich in tantalising symbolism that much is left to conjecture. Like that black line on the floor at the start of the show, Télémaque only allows you to get so close.