This show is a fully sensate experience, a meditation of sorts on the state of the world that turns the Duveen Galleries into a space to get lost in, physically and psychologically 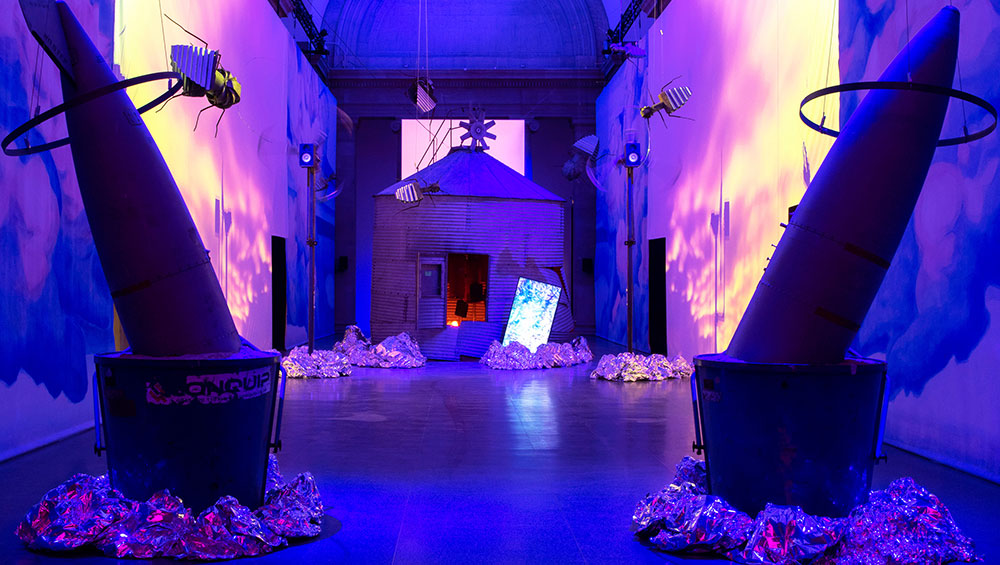 Walking into Heather Phillipson’s Tate Britain Commission, newly installed in the Duveen Galleries, is like entering a brave new world, albeit a somewhat dystopian one. The restrained architectural spaces of the Duveen Galleries are utterly transformed by Phillipson and are awash with sound, colour and motion, which, she says, are a series of “charged ecosystems, maladaptive seasons and unearthed lifeforms”. The apparently mutant lifeforms that occupy these spaces are formed from technological remains and are simultaneously witty and disturbing. This juxtaposition of wit and disconcert has some logic to it when we realise that Phillipson’s aim is to “cultivate strangeness, and its potential to generate ecstatic experience”, and she certainly succeeds in that aim.

This ambitious multimedia work features repurposed machinery, gigantic papier-mache sculptures and painted panoramas filled from edge to edge with video and sound. Huge piles of salt, aircraft fuel tanks (cleaved in half), gas canisters, revolving anchors and shapeshifting vents are floodlit with coloured neon light. The utter strangeness of Rupture No 1: Blowtorching the Bitten Peach means it is difficult to hold on to the reality of being in an art museum. It feels more like walking on to the set of a B movie, or waking up in the middle of a bad dream, and yet here we are in an art installation in a national museum and it is truly wonderful. 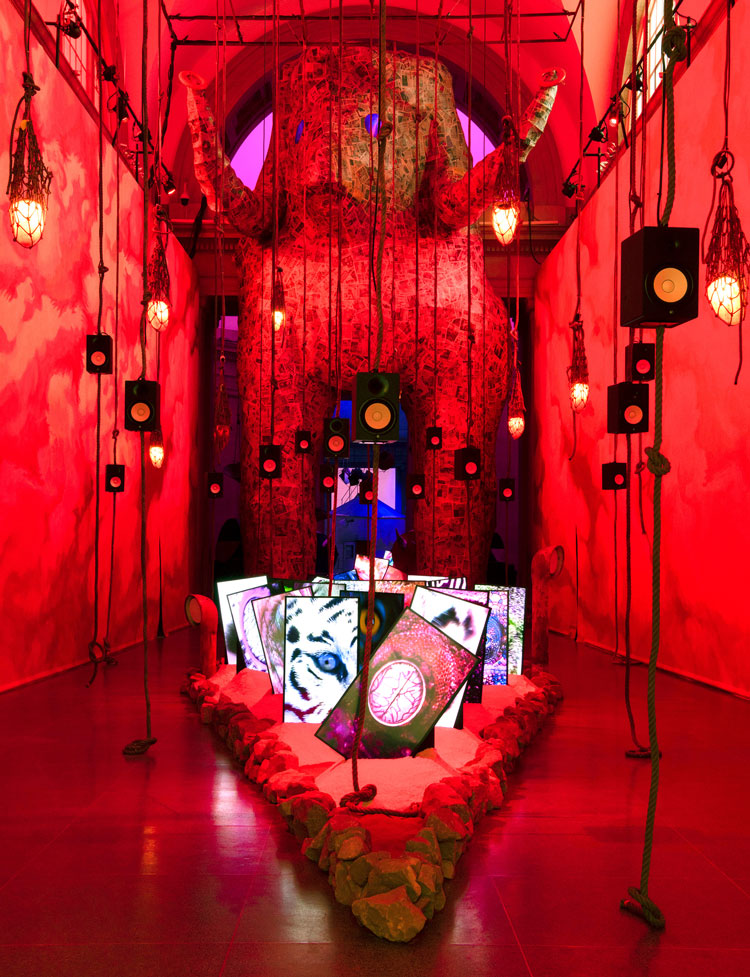 Visitors are welcomed into the first of three spaces by a warm red glow that suffuses the space. There is a disconnect between the inviting warmth of the red light and what we see before us. Piles of salt support multiple video screens showing closeup footage of individual mammal and reptile eyes opening and closing, observing us as we observe them. We are being watched. Thick twisted ropes, looped or knotted at the ends, drop to the floor from a frame high in the ceiling space. Some of these ropes support audio speakers part way down their length while, from others, glowing lumps of quartz rock dangle inside loose nets that appear as if they might rip under the weight at any moment. It is disconcerting to say the least. 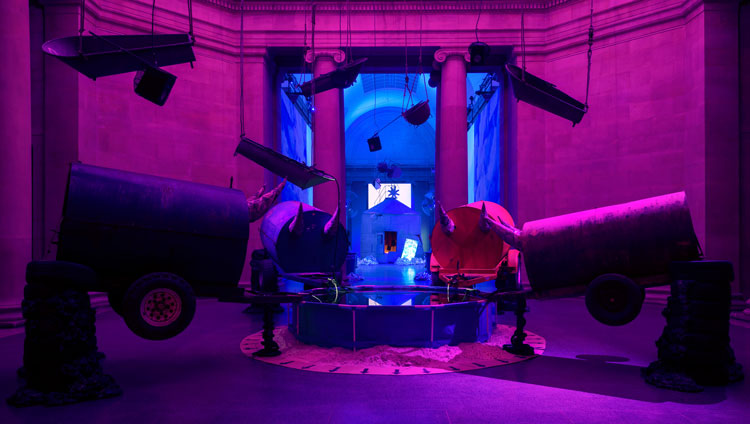 The next space, entered through the gaping legs of a Duveen-sized papier-mache creature, is saturated in pinkish-purple light and is home to a large semi-rigid plastic pool filled with liquid, perhaps diesel. Four stylised mechanical beings surround the pool. They are constructed from metal tanks, tyres and other materials. They each have papier-mache horns and a diesel-hose proboscis that dips into the pool. A soundtrack of animals gently lapping water is heard and we immediately imagine these inanimate mechanical beasts as living, breathing beings drinking at the waterhole. The sounds are hypnotic. Visitors sit down quietly on the floor in this space, communing with nature perhaps. None of this makes any sense. 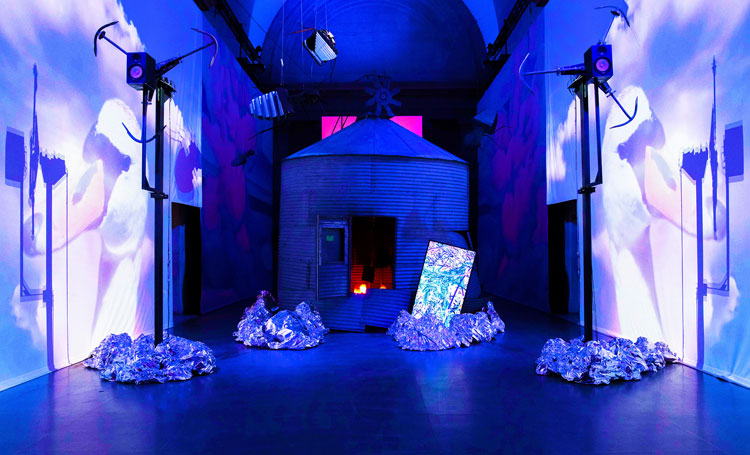 The final space of Rupture No 1 is bathed in cool blue light. A video of a storm is projected on to the walls and it sounds as if the wind is blowing hard while insects crawl and birds flap their wings. A corrugated iron shelter houses a series of hanging gas canisters that move in a light breeze and clang together like a dysfunctional windchime. Insects abound, crawling over the walls and suspended from the ceiling. Behind the shelter is a screen and a video of a sunrise/peach rising up above the horizon like an island, or a beacon of hope after we have worked our way through the various wastelands Phillipson has created for us.

Phillipson’s Tate Britain Commission comes at a time when The End, her 2020 commission for the Fourth Plinth in Trafalgar Square in London, is well established at the site where it will remain until August 2022. Meanwhile, Music for Rats is another Phillipson project, this time for the 13th Shanghai Biennale 2021. Phillipson also has work in the Drawing Biennal at the Drawing Room in London(21 May to 5 July 2021), situating her alongside her peers in a renowned exhibition and auction of more than 300 artworks by contemporary artists working in drawing. Her work Cyclonic Palate-Cleanser (2019) forms part of the British Art Show 9, touring Aberdeen, Wolverhampton, Manchester and Plymouth (10 July 2021 to 23 December 2022). Phillipson is busy and thank goodness for it. Still, nothing quite has the impact of this current installation with all its contradictions.

Phillipson describes her works as “quantum thought experiments”, but they are not only about thought, they are about experience and in Phillipson’s Rupture No 1 thought and experience come together. This is a fully sensate experience. Not only is there plenty to see and hear, but the smell and taste of varied materials lingers in the air and on the lips. This is a space to get lost in, physically and psychologically as the sound, colour and motion of the installation eventually overwhelms. It is a meditation of sorts on the state of the world and it is at one and the same time exhausting and refreshing. There is an underlying sense of threat and an environment on the threshold of collapse. The weight of the world’s problems is placed on our shoulders and in our minds, but there is hope for humankind too. Despite the dystopian vibe, I left Rupture No 1: Blowtorching the Bitten Peach feeling elated, not because everything is right with the world, but because Phillipson has created space to think about the world’s problems and how we might all make a positive contribution to change. 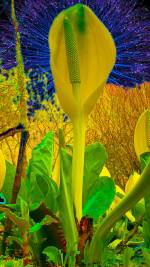 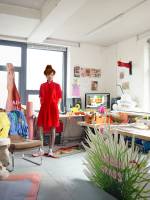