Gregory Crewdson: ‘I wanted the photographs to feel like a suburban window, to give a sense that the viewer is looking into a world’

Gregory Crewdson: ‘I wanted the photographs to feel like a suburban window, to give a sense that the viewer is looking into a world’

American photographer Gregory Crewdson talks about loneliness and connection in his work and, in particular, about Cathedral of the Pines, his current exhibition at the Photographers’ Gallery in London that sprang from a difficult time in his life 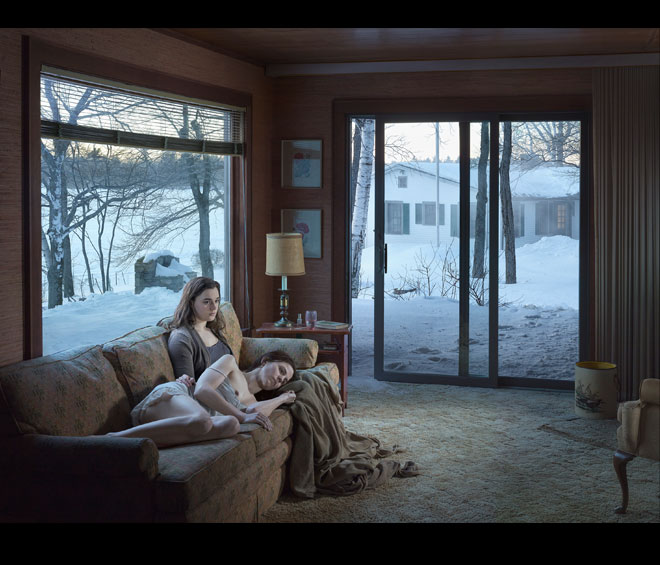 Photography has the capability to capture our most ephemeral experiences, especially those we encounter as strangers to the wilderness, resonating as material traces of hidden pasts and memories. Inexplicable and distant, the photographs in Gregory Crewdson’s exhibition Cathedral of the Pines, at the Photographers’ Gallery in London, transform mundane reality into something else – often captured in the majestic hours of twilight. We see figures occupying settings where they seem displaced; scenes where their gesture and expression reflect the atmosphere of an environment, rendering it uncanny, otherworldly.

Crewdson’s practice is one of contrasting entanglements. He sets the psychological and emotional isolation of his subjects against the vast expanse of the natural world, resulting in opaque, uncanny photographs. He was born in Brooklyn in 1962 and, after graduating in 1988 from Yale University School of Art – where he is now director of studies in photography – he worked extensively within the medium of photography. His images expose the realities of American suburbia and wilderness through the families and individuals who inhabit it. His work has been internationally exhibited, notably at the Gagosian Gallery, and is held in collections including at the Museum of Modern Art, New York. I met him at the Photographers’ Gallery to talk about his work and, specifically, Cathedral of the Pines. The solo show, which is situated on three floors, is a body of photographs, from 2013-4, that juxtaposes the banality of human existence with desolate scenes of deserted buildings in the small rural town of Becket, Massachusetts and its surrounding forests. There are hidden narratives in his photographs, visual documentations of  how people feel and find meaning, even in the most desolate of territories.

Harriet Nestor: Your exhibition Cathedral of the Pines, which comprises works produced between 2013 and 2014, meditates on ideas of isolation and how humans might behave in desolate, natural environments. Do the photographs seek to reveal the poignant realities of these figures?

Gregory Crewdson: Yes, the entire body of work comes down to a number of themes but, at its core, is a search for internal meaning.

HN: So it’s quite existential?

GC: I think so. I was going through a difficult time in my life while making these pictures. My marriage ended, I left New York, and moved into a church near where the photographs were shot. At this time, there seemed to be a lot at stake in my life – there was a period, at least a few years, where I wasn’t able to make work, the equivalent to writer’s block. So when I was finally able to start this body of pictures, it was all very defined in my head.

HN: It could be interpreted that there is a thread of autobiography in this series that derives from experiences in your childhood, which adds another layer of your presence to the series. Can you reflect on your emotional journey while capturing these images?

GC: Yes. I think there is always a relationship between life and art. My pictures are never directly autobiographical, but they do derive from my psychological anxieties, fears and desires. In this particular series, they feel very close to home, especially in relation to what was happening at this time in my life. They are all made in Becket, where my family had a country house, for example. The figures in the photographs are all people whom I know and love. Yet they are not about any of this personal narrative particularly – that is just the backdrop to build a fiction in the series.

HN: The French philosopher Roland Barthes said: “A specific photograph, in effect, is never distinguished from its referent.” Do you think these photographs demonstrate a similar trajectory, in that they originate from an environment that is nostalgic for you? Is solitude at the heart of these images?

GC: For me, solitude is tied into the medium. Speaking of Barthes, I think, generally (which can be a simplified statement), most photographers are drawn to the medium by some separation they feel from the world. Photographers never quite seem to be at home in the world, and yet the act of putting a camera in front of one’s eyes is an act of separation. That theme runs throughout my pictures, but I do also think photographers want some sense of connection. Those two things come together in this series: a sense of being alone, while also wanting to feel connected.

HN: Many of your photographs have been compared to the paintings of Edward Hopper. The idea of being anonymous is often something considered to be symptomatic of living in overpopulated environments, such as cities. However, in your photographs, the dominant environment is a natural one, where figures are suspended in a remote narrative, but yet also feel somewhere unattested. Do you direct the subjects as to how to behave?

GC: I am always conscious of the relationship between the figure and the space – that, to me, is key: how does the figure exist in the larger setting, whether it be an interior or a landscape? For instance, within an interior, there is also a relationship between the figure, the interior space and the exterior space, which all become part of a visual equation. Trying to find a perfect balance between all three is a great challenge in my practice.

HN: Is the composition something you plan while taking the photographs, or do you do so beforehand?

GC: I plan it beforehand, which requires an awareness of finding the perfect symmetry within the photograph – where the figure exists in that particular space at that time.

HN: Is that quite intuitive for you as an artist?

GC: Yes, very much so. Then, in a landscape, it’s more about a sense of scale – how the figure is dwarfed by the landscape and the vastness of nature.

HN: Yes, there is a real sense of physical fragility in Cathedral of the Pines. Despite being in the forests of Massachusetts, many of the photographs have traces of civilisation, such as cars. Is there a feeling that these figures are moving through the environment, as opposed to living within it?

GC: I think you are right about that – the photographs are somewhat transient. There are also a lot of makeshift homes, where there are sheds, outhouses.

HN: Which don’t feel as though they could be inhabited for a long period of time.

GC: Yes. It is a human impulse to create a home for yourself, wherever you are in the world. That’s a theme: how do we create security and meaning for ourselves? Which really, in essence, suggests a longing for a sense of belonging, which made perfect sense for me a few years ago, as I was searching for home in my life.

HN: There is an elongation of time in your photographs, in that the temporality before and after the capturing of the figures in this particular moment marks their embodying of space in a certain environment. In the photograph The Pine Forest, through the posture of the woman in relation to the positioning of the car, there is the suggestion that she is contemplating something. Is there a temporal element in your work, to create a feeling of longing?

GC: Well, first, I think elongation of time is really important because all the photographs are composites because we are always changing the focus. Not one picture exists in an isolated second – it is the duration of many moments. The pictures are the moments in between moments, too, which are the times where you are lost between two different things; a state of limbo.

HN: Is that idea of multiple moments reflected in all the images being the same size and how they are displayed? Almost like a film reel?

GC: Yes. The size of the photographs was very important to me. In Beneath the Roses (2003-7), which was a larger-scale body of work, the prints were incredibly big – panoramic and cinematic, like a movie screen. These in reference are smaller, more like paintings. I wanted them to feel like a suburban window, a sense that the viewer is looking into a world.

HN: Yes, there is a simplicity in the presentation of the images. The titles of the photographs are very literal, too, such as The Haircut, The Mattress and The Motel. Is this linguistic choice purposefully enacted to maintain a realism in the photographs for the viewer? It seems to move away from an ambiguous territory.

GC: I wanted the title of the entire body of work to be poetic. Cathedral of the Pines is a trail name I came across while cross-country skiing. Because it was a trail, it suggested moving through something. The picture of the boy with the skis, also called Cathedral of the Pines, is of this specific trail. So, to contrast that title, I thought it would be nice to have simplistic and direct descriptions of what we are seeing in these images. I didn’t want there to be any room for interpretation, which also plays on a tradition in painting.

HN: Can you say more about this relation to naming of paintings and their traditions?

GC: I am always interested in the viewer creating their own story. In this series, I am not preoccupied with interpreting what the picture necessarily means, which does not help the viewer in any way; it is the most basic element of what you are encountering visually.

HN: Some of the figures are naked. How does nudity operate in these photographs?

GC: Generally, there aren’t a lot of clothes in the photographs. Initially, I wanted this series to be about flesh. I think that is evident in every single picture. When there are clothes, they suggest a vulnerability; a bra, underwear, a dressing gown. Because of the artistic references I was looking at, such as Hopper, and how nature is represented in these paintings, I wanted to see flesh and flesh’s relationship to the natural world. But I think it makes the figures feel more vulnerable – there are naked bodies, young bodies and ageing bodies that raise ideas of mortality. All of this is meant to make the figures seem more vulnerable.

HN: Yes, it feels like a commentary on the human condition, vulnerability. And perhaps on that vulnerability being the state where a search for meaning in oneself originates – when you are caught off guard emotionally, perhaps, which seems quite generous to the viewer.

GC: Yes. For me, it was definitely part of being unable to separate life from art. These images were very much part of a time where that was not possible for me.

HN: Does it feel as if they are a byproduct of a chapter in your life that you now look back on, like a diary entry?

GC: Yes. It is always that way, and I look back on older bodies of work and think that I would never remake pictures in the way I once did. Whether or not I like them is irrelevant. It’s about recognising that I wouldn’t approach art in the same way now.

• Gregory Crewdson: Cathedral of the Pines is at the Photographers’ Gallery, London, until 8 October 2017