Grace Weir: ‘I often think through the camera’

Grace Weir: ‘I often think through the camera’

In Irish film artist Grace Weir’s latest exhibition, Unfolded, past and present, the real and representational repeatedly elide. Here, Weir talks about her work and about challenging notions of fixity in art, physics and philosophy

“I have taken a transdisciplinary approach [bridging] physics, philosophy and the history of art,” says the Irish film artist Grace Weir (b1962, Dublin). Her practice examines the overlaps between what are often thought of as disparate fields, and seeks to challenge hierarchies and fixities within them by exploring counter narratives. Explaining the thinking behind her current exhibition, Unfolded, at Laure Genillard in London, Weir says her work attempts “to rupture the master-narratives of art and science by taking a different trajectory through subject matter and unfolding established histories”. 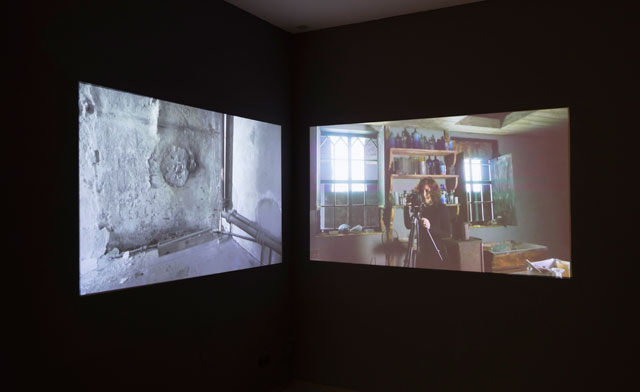 Unfolded comprises a selection of the artist’s recent installation works and films. Two films centre on female pioneers of art and science, challenging male-centric histories. A Reflection on Light (2015) follows the Irish cubist painter Mainie Jellett, whose Decoration (1923) was among the first abstract paintings to be exhibited in Ireland following the birth of the Irish Free State in 1922 when it was shown at a group exhibition in Dublin in 1923. Weir says the work “could be considered to date the start of modernism in Ireland”. And yet at the time, it was met with shock and vicious criticism. As the narrator explains in the film, says Weir, first reviews branded the painting “a freak picture”, “subhuman”, “an insoluble puzzle”. 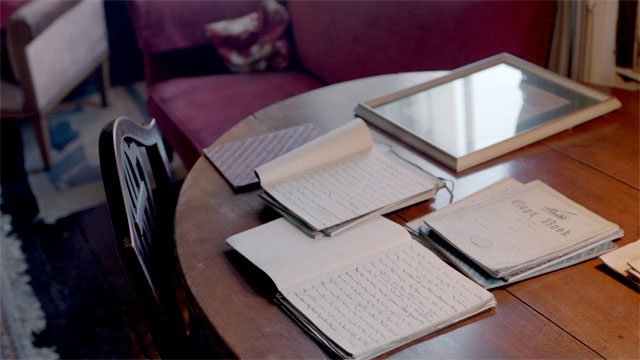 Mary Rosse, the subject of Darkroom (2015) was equally pioneering, and as neglected by history. Weir says: “Rosse was a pioneer in photography in Ireland in the 1850s and was the first person to win the silver medal award of the Royal Photographic Society of Ireland. To put that in context, you have to remember that 1839 is generally considered the year when practical photography was invented.” Despite all this, Rosse’s legacy is minimal.

It was during a chance astronomy trip that Weir heard about Rosse and was invited to see her darkroom in Birr Castle, County Offaly. It claims to be the oldest darkroom in the world and had been closed off in the early 1900s, before being rediscovered in 1983. 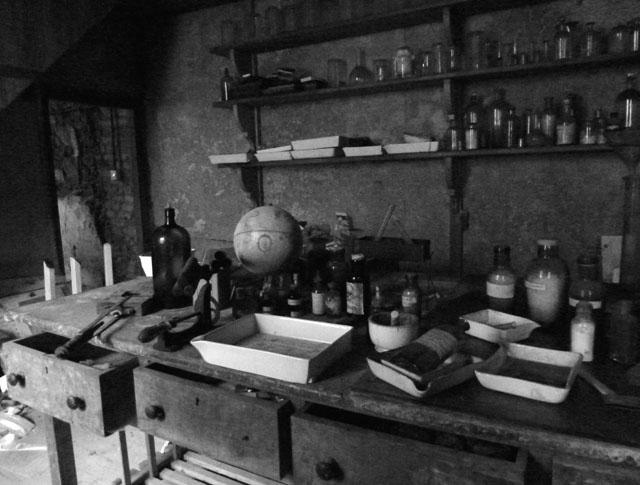 When Weir first visited the darkroom she took a snapshot using a borrowed camera, intending to return. However, when she later contacted the castle, she was told that the darkroom was in the process of being dismantled and reconstructed in the castle’s public exhibition centre.

“Partly prompted by a sense of loss,” says Weir, “I returned to the room where the darkroom was originally and filmed a sequence of video shots within the emptied [space]”. The artist then filmed the reconstructed darkroom. The original darkroom’s entire contents had been moved and the old room exactly replicated. Weir’s Darkroom provides, she says, the means to think about “the relationship between reconstruction and photography” and the “attempt to fix a moment”. The work comprises two films, one featuring the footage from the emptied space where the darkroom had been before it was relocated, and the other from the reconstruction. At Laure Genillard, the two films are projected at right angles to one another, as if the past were unfolding from the present – and vice versa. 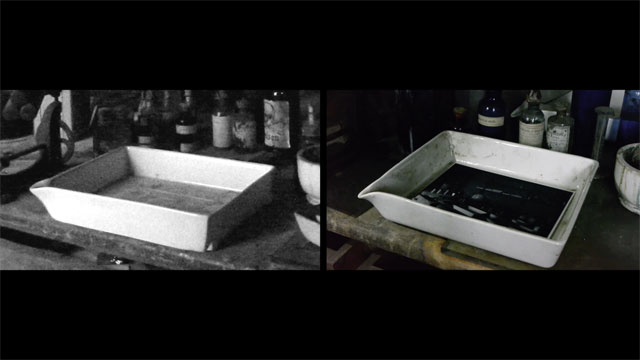 Darkroom problematises the supposed separation between history and the present. Rosse’s darkroom functions as a constant across history. The room’s physical context changes drastically, from castle to science centre, but the space itself remains essentially the same, suggesting that history is constantly altering with the present. A Reflection on Light challenges temporal boundaries in a similar way to Darkroom. Weir recalls that during her time as artist in residence at the School of Physics in Trinity College Dublin, she came across another of Jellett’s paintings, Let There Be Light (1938). It features religious and scientific symbolism and shows a hand breaking a ray of white light into a prismatic sequence of colour. “I began thinking about the recurrence of the painting over time in different contexts,” Weir says.

The painting has appeared across disparate locations, once in the Irish Museum of Modern Art for the 2013 exhibition Analysing Cubism and then again at Trinity College. As with Darkroom, “the painting is a kind of constant while what surrounds it changes”, says Weir. 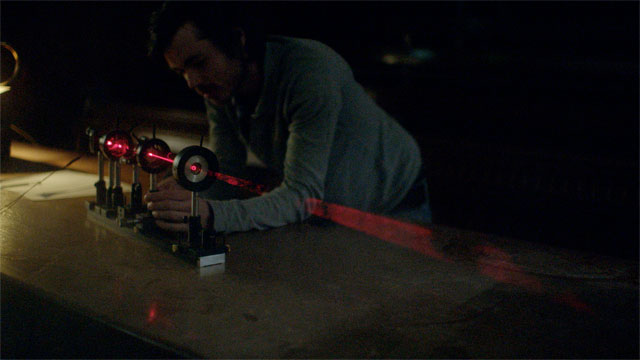 Both these films blur the imagined boundary between past and present. In one scene in A reflection on light, the camera zooms out from a black-and-white photograph of Jellett’s family in her living room to the same room in the present day. The voiceover tells us that Maine’s sisters used to play the piano there. “This is the note A…B,” the voiceover says as the notes echo and merge. The camera slowly draws back from the photograph into the room, presenting past and present as elements in a continuum, rather than discrete oppositional entities, A or B.

Weir says of A reflection on light: “I was thinking about the presentness of the past and how film maps one time on to another, the time of the recorded event with the experience of viewing it.” In that sense, Weir’s conception of time is deeply engrained in her filmic practice. “Time is intrinsic to film-making … As I began working in film and digital video, I became interested in the specific nature of the media. In the mid-90s, around the time I read Einstein’s theory of relativity and understood its implications for time, I also began reading Gilles Deleuze’s books about cinema and the time-image. I think I started to combine these different theories in my mind. Movement and time are two of the most important concepts within film. As Deleuze states: ‘Cinema does not give us an image to which movement is added, it immediately gives us a movement-image.’” 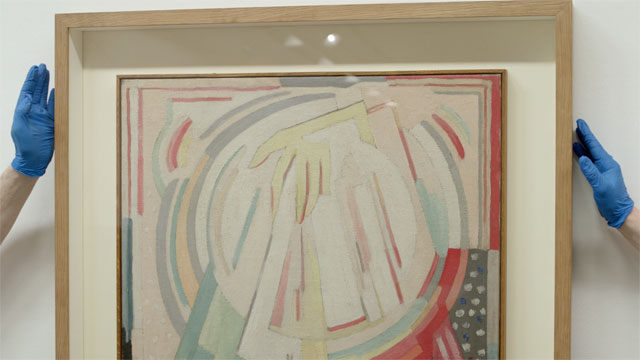 Darkroom not only meditates on the flux between the past and present but also the slippage between the real and representational in film and photography. Throughout the film’s two parts, Weir draws attention to the way time and space are mediated by the camera. In the original darkroom space, the camera focuses on windows to the outside world and open doorways, repeating the frame of the camera – another type of portal. In the footage of the relocated darkroom, the viewer sees Weir operating the camera, figuring the act of filming within the film itself. The film is reminiscent of Diego Velázquez’s Las Meninas (1656), which features a window and gaping doorway and, because it is painted from the sitters’ point of view, depicts the artist painting the portrait – like Weir, in the act of working. The similarities with Las Meninas do not stop there. Weir’s film employs mise-en-abyme, an endless series of images within images, as in Velázquez’s picture, where the sitters can be seen in a mirror at back of the room. At the film’s climax, Weir places her snapshot of the original darkroom in a developing dish in the reconstructed room. The camera slowly zooms into the photograph and the developing dish in the original darkroom gradually comes into view. The cacophony of images within images produces what Weir terms a “strange lucidity” between the real and representational. 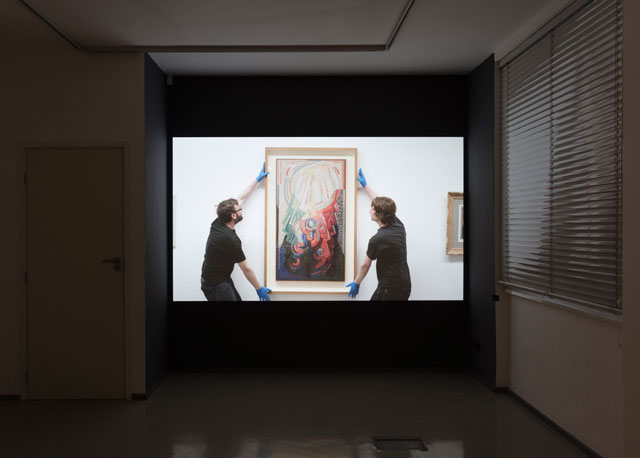 The films from Weir’s Script series (2009-) in the exhibition also meditate on film. They “are about making words relevant to the filmed activity”, Weir says. She refers to them as “filmic exercises of studio activity” because they are “explorations of film as a medium” and shot in and around the studio. Script (5) Whiteout (2010)examines the film technique of slow dissolve. Written in the snow is the word “dissolve”. As the word’s outline gradually melts in the sun, the shot slowly dissolves. Script (2) Timeout With Albert (2009) riffs on the idea of the studio as a site of playful experimentation. It features a figure in an Albert Einstein mask falling off a chair – a nod to slapstick cinema. Weir pricks the word “brilliant” on a sheet of paper, then pins it to a window. The light shines through, referencing the “brilliant light” piercing the paper.

References to filmic techniques are an ever-present feature of Weir’s work. The artist says:  “I often think through the camera, even in work which does not involve directly using a camera, such as in the Future Perfect (2015–) paintings.”

Parallels can be drawn between the way Weir’s films and the paintings change over time. Geometric rays of colour are painted using photography retouching inks that have varying lightfastness. Some fade over weeks, others take a hundred years; where the works are placed in exhibition matters, therefore. Of the 21 paintings shown, those opposite the window and direct sunlight will fade much faster than those only exposed to ambient light. The works are in flux. “At no point is there a perfectly resolved image”, says Weir. The title Future Perfect refers to the verb tense for an action completed in the future (“I will have arrived tomorrow”). This state of suspension mirrors the sense with which film puts the past in motion.

Weir’s conception of time is tethered to ideas about space. Our conception of space has altered with what Weir calls “the prevalent ‘thought forms’ of a time”. In Parallel (2017), also in Unfolded, observes changing theories of space and time. With the camera sited above a large sheet of paper, the film, Weir explains, begins with the drawing of a straight line and an exploration of Euclid’s The Elements, a geometry treatise written in around 300BC. It is one of mathematics’ and philosophy’s most enduring and influential “master-narratives”. The treatise, she adds, “was second only to the Bible in the number of editions published on the invention of the printing press”. The film presents a series of verbal and drawn geometrical propositions, one being the parallel postulate – the proposition that given any straight line and a point not on it, there exists only one straight line that passes through that point and never intersects the other line, no matter how far they are extended. Mathematicians attempted to prove this postulate for 2,000 years until it was finally repudiated, leading to development of non-Euclidean geometries and, Weir adds: “The realisation that the objects of geometry are not necessarily to be found in the physical world, that they are pure abstractions, creations of the human mind. Spaces of more than three dimensions shook the absolute nature of classical conceptions of space, and of the uniform flow of time, leading to the conjoining of two seemingly radically different entities into one: space-time.”

The connection that In Parallel establishes between space and time was further developed in a performance in the gallery, two weeks after the exhibition opened, by Weir and the show’s curator, Jo Melvin, a reader in fine art theory at Chelsea College of Arts in London. Melvin specialises in artists’ and institutional archives and says she and Weir share an interest in “the plasticity of history”, one that exposes “the fluidity of its condition through the encounter with something new – an artwork”. In the performance, suggests Melvin: “The exhibition unfolded … using the architecture spatially.” Weir and Melvin provided an elegiac verbal response to the exhibition while they moved through the gallery, a labyrinth spread over the ground floor, basement, outside passage, darkroom and archive. Toward the event’s climax, Melvin compared the gallery’s architecture to a Möbius strip, a three-dimensional shape with only one side and one boundary. Like the Future Perfect paintings, a Möbius strip has no end; its beginning and end are in perpetual flux, providing a metaphor for Weir’s work in which space and time, history and the present, and the real and representational appear in a constant state of elision.

• Grace Weir: Unfolded is at Laure Genillard, London, until 18 November