During her lifetime, Hannah Gluckstein (Gluck) refused to show in group exhibitions. The Fine Art Society has stayed true to her wishes with this extensive retrospective on the ground floor complemented by an exhibition upstairs of works by several of her contemporaries 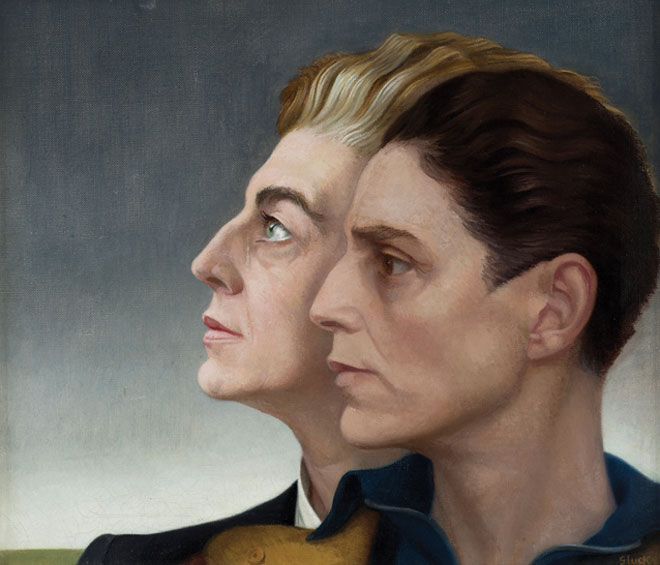 “Women can’t write, women can’t paint,” sneers a male character in Virginia Woolf’s 1927 novel To The Lighthouse, dismissing the artist Lily Briscoe in her consuming effort to achieve her “vision”. Gluck, born Hannah Gluckstein in 1895, was determined never to allow her gender to dictate such patronising reactions to – or presumptions about – her work. Gluck (“no prefix, suffix, or quotes,” she would insist) refused to conform to societal expectations of women in her behaviour or her dress: at a time when women didn’t wear trousers, she cropped her hair, bought her clothes from men’s tailors on Jermyn Street in London and her shoes from the royal bootmakers; she held doors open for “ladies” and smoked a pipe. “I do not know that I should altogether like my own wife or my own daughters to adopt Miss Gluck’s style of dressing her hair or clothing her limbs,” wrote one critic in 1926, “but I do know that I should be proud of them if they could paint as well as Miss Gluck paints.”

Nor did Gluck want her work to be boxed or labelled: she refused to show in group exhibitions, unwilling to align herself with any movements. The Fine Art Society – where three of her four exhibitions were held during her lifetime – has stayed true to her wish, presenting this extensive retrospective on the ground floor of its beautiful Mayfair house, while upstairs the exhibition Modern British Women displays works by several of Gluck’s contemporaries, from Vanessa Bell and Dora Carrington to Elisabeth Frink and Gillian Ayres. Figures recently reported in the Guardian indicate that women are far less likely than men to have single shows at public or commercial galleries, while their works comprise just 4% of the collection of the National Gallery of Scotland, 20% of the Whitworth Manchester’s and – despite improvements in the new Switch House – no more than 35% of the Tate Modern’s. This reappraisal is both a timely reminder that the art world is not innocent of systemic inequality, and a joyous whirlwind tour through the range and power of 20th-century art.

Gluck was always secretive about her origins: born into the family who founded the catering empire J Lyons & Co, known for its palatial restaurants and grand hotels, she agonised over her instinct to dissociate from her family, while remaining financially dependent on her father to fund her rebellion. Several of the artists displayed upstairs studied at the famous Slade School of Art (the first school to allow women to partake in life-drawing classes), but Gluck’s father, hoping she would soon abandon her studies in favour of marriage, reluctantly let her enrol at the local art school in St John’s Wood. In 1916, with a female lover from her course, she first visited Lamorna, where she encountered the Newlyn School – a colony of artists attracted to Cornwall by the light and their endless fascination with the pastoral subjects presented. Living in a hamlet with a stream flowing down to the sea, Gluck began to paint the evocative Cornish scenes – full of “great expanses of sky” whose colour would alter in the wind – to which she would return during the rest of her life. A sketch by Alfred Munnings, shown here, presents a carefree Gluck smoking a pipe on the hillside: in Cornwall, she began to construct an identity of her own, free from the strictures of conventional society.

Gluck was a wonderful observer of village life, and other works from Cornwall – where she retained a studio throughout her life – include scenes from the races and sensual portraits of her friends bathing and lazing. Her biographer Diana Souhami writes: “Gluck painted the people who were close to her, the view from the window, the landscapes that moved her, the flowers from her garden, the news that intrigued her. She chronicled her life in paint.” The artist divided her time between London and Cornwall, and since her work tended to mirror her surroundings, there is a sharp contrast between her Cornish scenes and the portraits of glamorous society women, and roaring 20s scenes of music halls, cabarets and cafe culture: this duality was captured in the title of her first exhibition at the Fine Art Society, Stage and Country, held in 1926. A relationship with divorced socialite Sybil Cookson introduced Gluck into high society: her portraits of sophisticated women – many of whom were lesbians – in feathered hats, polka dot scarves and furs, often smoking or gazing defiantly at the viewer, are some of her finest work. With Sybil, Gluck attended boxing matches and dance shows at the London Pavilion and the Trocadero: intrigued by the artificiality of performance, she made works such as the dramatic Baldock vs Bell at the Royal Albert Hall (1927), the crowd blended into the dark background while the ring glows white.

Between 1932 and 1936, Gluck was involved in a relationship with Constance Spry, a flower arranger commissioned for weddings, debutante balls and upmarket shop windows. Her work influenced Gluck to make several still-life paintings – imbued with an erotic dimension reminiscent of Georgia O’Keeffe’s work – of flowers in vases against clear backgrounds (cream, black, blue); both women were especially fond of white flowers, where the coolness of the petals would allow light and shade to dance across the surface. In the mid-30s, Gluck began a relationship with Nesta Obermer; testament to their affair is Gluck’s most recognisable work, famously used later as a cover for Radclyffe Hall’s lesbian novel The Well of Loneliness, which was censored dramatically on its publication in 1928. Medallion (1937), which she called “the YouWe picture”, shows two figures in profile, standing almost impossibly close and blending into one another as they gaze assertively out of the frame, against the plain background of a darkening sky. The power of the composition is made poignant by the end of the relationship it was painted to celebrate: Gluck, consumed by love, cut off ties with many old friends and destroyed several early canvases, but Obermer was married and unwilling to cause scandal by leaving her husband.

Following the second world war, Gluck’s output decreased: she was depressed to hear that the widowed Obermer had announced a new engagement, while subsequent affairs went awry, and the acclaim that followed her 1932 show at the Fine Art Society, at which all works were sold and the run extended for a month, did not lead to another show. She poured her energies into a long campaign to improve the standards of artists’ paints, hoping to ensure her work would last, while her active production ironically dwindled.

In 1973, six years before her death, she resurfaced for a final solo exhibition, delighted to have an opportunity to “come back just sufficiently as a painter before my demise”; it featured her last major work, also shown here, entitled Credo (Rage, Rage Against the Dying of the Light) (1970-3), which she worked on until the gallerists drove to her house to wrest the picture from her. It shows the skeletal head of a fish that Gluck had discovered on the beach at Worthing, which had arrested her with its enduring sense of vitality. “For me,” she wrote, “what had seemed a symbol of decay and death had become an emblem of resurrection.”

Upstairs, Modern British Women shows work by several artists born, like Gluck, around the turn of the century, and working across a plethora of styles and forms. Bloomsbury is represented by a beautiful portrait in impressionist style by Bell – currently subject of a retrospective at the Dulwich Picture Gallery – and Carrington’s c1924 portrait of her servant Annie staring out in her apron against leafy wallpaper. Representations of realism include a comic pastoral scene by Mary Adshead – who won joint first prize with Rex Whistler at the Slade in 1924 – showing a broken-down car on a country road, and Alice Fanner’s Spring In Hyde Park (c1910), a wonderful snapshot of rus in urbe, trees blowing serenely as children walk by with their nurses and a woman sits under a pink parasol. Much of the show comprises abstract works by painters including Ayres, Wilhelmina Barns-Graham, Prunella Clough, Winifred Nicholson and Sandra Blow, while there are several works by Anne Redpath, from exhilaratingly haphazard domestic still-life assemblages to colourful Spanish townscapes rendered almost abstract. Complemented by a display of work by contemporary women artists on the ground floor, these beautiful exhibitions are enough to silence even the most closed-minded of fictional critics. 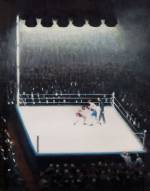