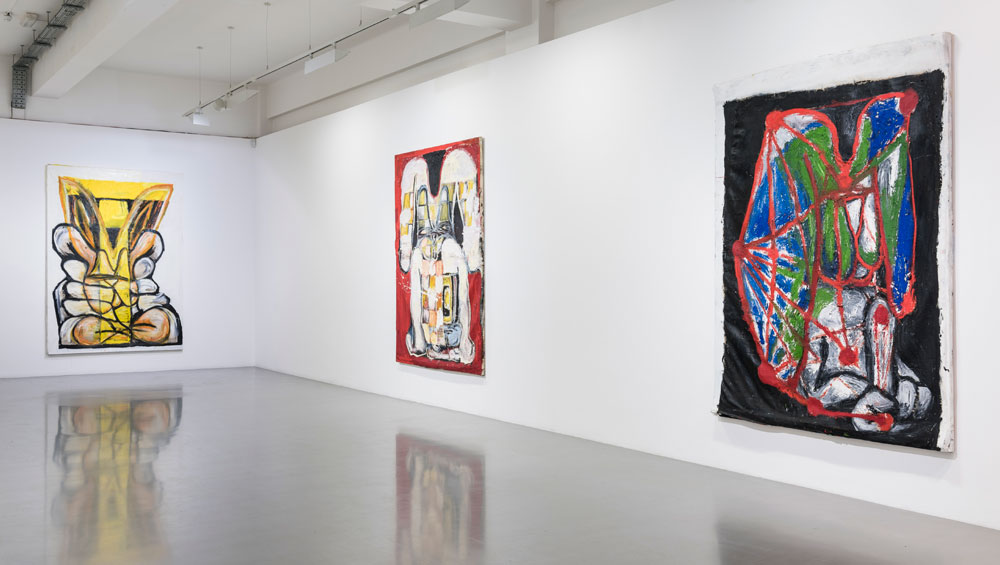 Through his expressive paintings, Gerasimos Floratos (b1986, New York) produces a theatrical and abstract depiction of his New York life, experienced from behind the register of his family’s deli in Times Square. Walking through the streets, or looking out through the window of a moving taxi, he sees himself as part of an ecosystem of people, experiences and images that come together in his paintings to form one character, created with a heavy application of coloured oil paint in bold, curving lines.

Floratos sees New York City in shapes – a taxi stuck in gridlock or a street-level shop front become simplified forms, vying for space and attention. He stockpiles these shapes in his head and later they emerge on canvas. Bridging abstraction and figuration, somewhere between object and being, his paintings appeal to the imagination like clouds in the sky morphing from shape to shape.

Each shape takes on a personality like a cartoon character, who communicates to the viewer Floratos’s history, the people in his life and the people of New York City. He has found a fluidity between his own life and his subject matter – he sees observation as a subjective act.

Listening to him talking while walking out on to the street from the deli, where he grew up and still spends time every week, hailing a cab to West 22nd Street, it is easy to see how these expressive abstract paintings are, in fact, autobiographical.

The works are portraits of a mind immersed in subject matter – jumping between subjects, following distractions, caught suddenly by surprise – yet he sees himself not as an impressionist flâneur, but more of an expressionist by nature. His works are not about documenting New York City, but allowing what he sees to mutate in his brain and become part of a painting.

Rabbits and taxis are two of the motifs that he mentions, and they can be recognised in works such as Triborough Force Field, TS Post-Up and Little Taxi Boy (all 2016), where floppy rabbits ears fold down over the forms, and cartoon faces emerge through the layers of paint. The eye can discover essences of their forms in other paintings where shapes are familiar, yet not distinguishable.

Stepping back, I see sofa cushions, furniture, animals and body parts – faces, fists, intestines. There are no straight lines; there is always movement. Not dynamic and smooth movement, but a tense clenching, squeezing and resisting, like passing cars on a busy street, a three-point turn in a narrow space, the scraping of a car door across a lamppost, subway trains moving through their tunnels, a padded jacket pushing through a crowd. Floratos paints the friction of the city.

Floratos’s choice of paint is oil, because it stays wet longer and it is brighter to his eye. He layers it on abundantly, testing its limits with such thickness that it cracks and flakes. In Mystic Taxi (2016), the texture of the white paint, which frames a shape I see as a half-squashed tin can, is almost like a white plastic bag – yet it seems viscose, silken and crumpled – while the black paint in TS Minion Alignment (2016) is textured like wet cement on the pavement – thick and grainy, picking up prints and grit before solidifying. Merging and mixing in its pure form, the oil paint dries in sculptural crusts, forming cracks where it is too thick. Standing close to the painting 1ove (2016), you can see where green pigments have mixed into an exquisitely repugnant mesh of colours.

The artist is more interested in the act of making a mark than the historical notions associated with oil paint, which he prefers to call “liquid colour”, and his work is often compared to graffiti art, yet he says that what he is doing is more like a high-school kid drawing in the back of a notepad, finding ways to interpret the world from his own perspective. Interestingly, Floratos is a collector of works by artists with disabilities, which he uses as points of reference for his work.

His paintings have a grotesque style – the over-painted primary colours are piled on to over-stretched canvases that gape and sag. There is a humour and a darkness that relate to their subject matter about urban living, the city environment and the situations that arise there – the colours, the dirt and the aforemetioned friction. Downstairs in the lower gallery at Pilar Corrias, the paintings are noticeably darker in colour. In the work International Taxi Boy (2016), the sassy street bunny becomes Frank the Rabbit from the 2001 film Donnie Darko, a shadier character who is more dominant and more defined than the rabbits upstairs. The rabbit has a grimace of a smile and brandishes a badge, his fist enlarged in the central foreground of the painting, like a smug police-rabbit cartoon.

In Little Taxi Boy (2016), the rabbit is hunched, his arms around his knees, and a “T” is painted on top of his form across the whole canvas, chequered like the yellow street markings on the New York City roads. Floratos likes taxis because they are a symbol of New York City, and also a meditation on control – you are giving the directions, yet you are not driving. The city itself is a conundrum. We suffer the traffic, the queues and the crowds, yet, as well as the challenges, the visual ammunition it shoots at us is incomparable – the hundreds of opportunities presented each day and the fascinating characters who appear. It may be loud and brash, but it is exciting and overwhelming at once, and this can also be said of Floratos’s work. 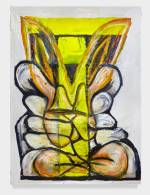 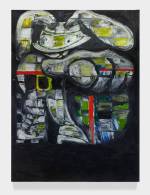 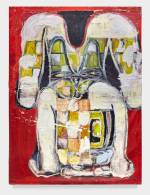 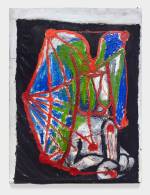