Elements of care and craftsmanship link Genesis, a floating faith space on a traditional narrowboat, to ancient and rural church typologies. Designed by the architects Denizen Works, it will support communities on and around east London’s canals 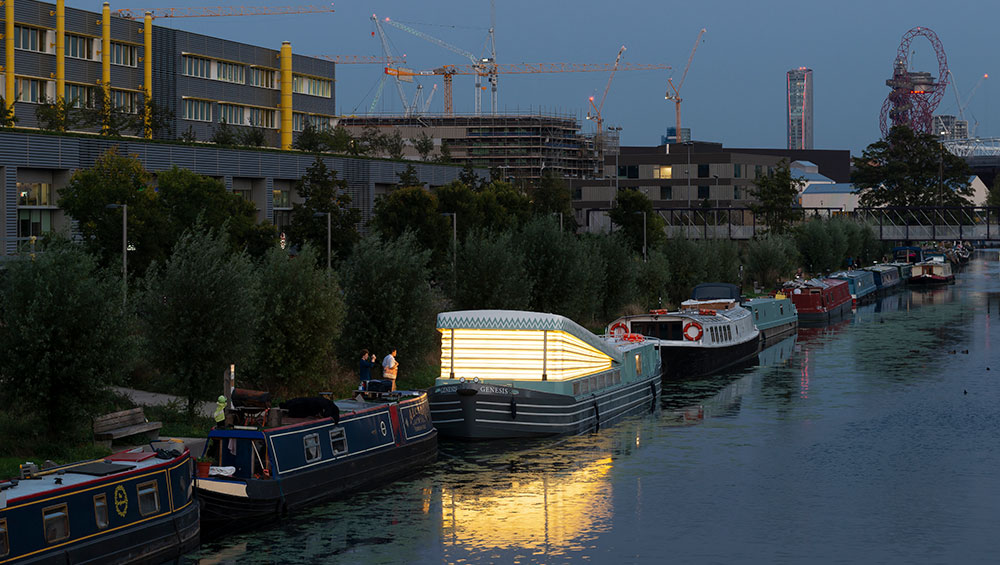 “Churches used to be designed to make people feel small,” says architect Murray Kerr. “This is the opposite. It’s designed to make you feel comfortable.” There can certainly be fewer more enchanting spaces along the London canal system on a dreary December day than Genesis, a floating church, designed for the Church of England by Kerr’s practice, Denizen Works. 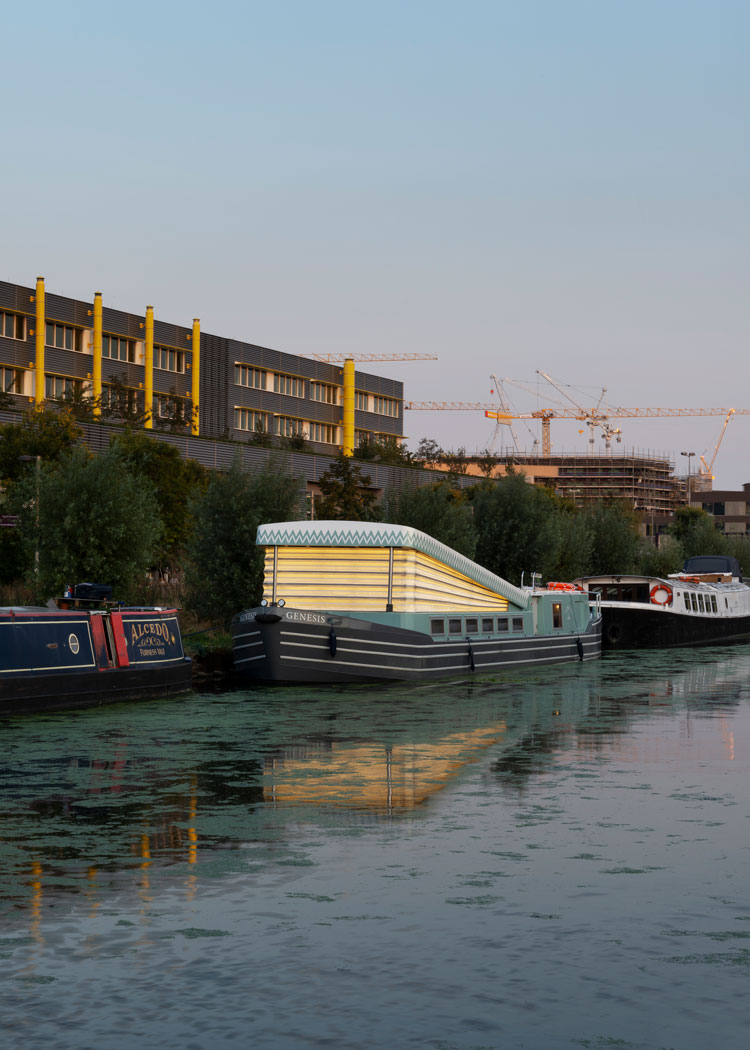 With its pop-up, campervan-esque sailcloth roof expanded and fully visible from far along the towpath, and the light from its glowing, plywood interior casting zigzag patterns over the canal through the delicate aluminium window grilles, it absolutely delivers on Kerr’s promise to “(explore) the idea that faith and community buildings can be much more intimate and less frightening on first encounter”. 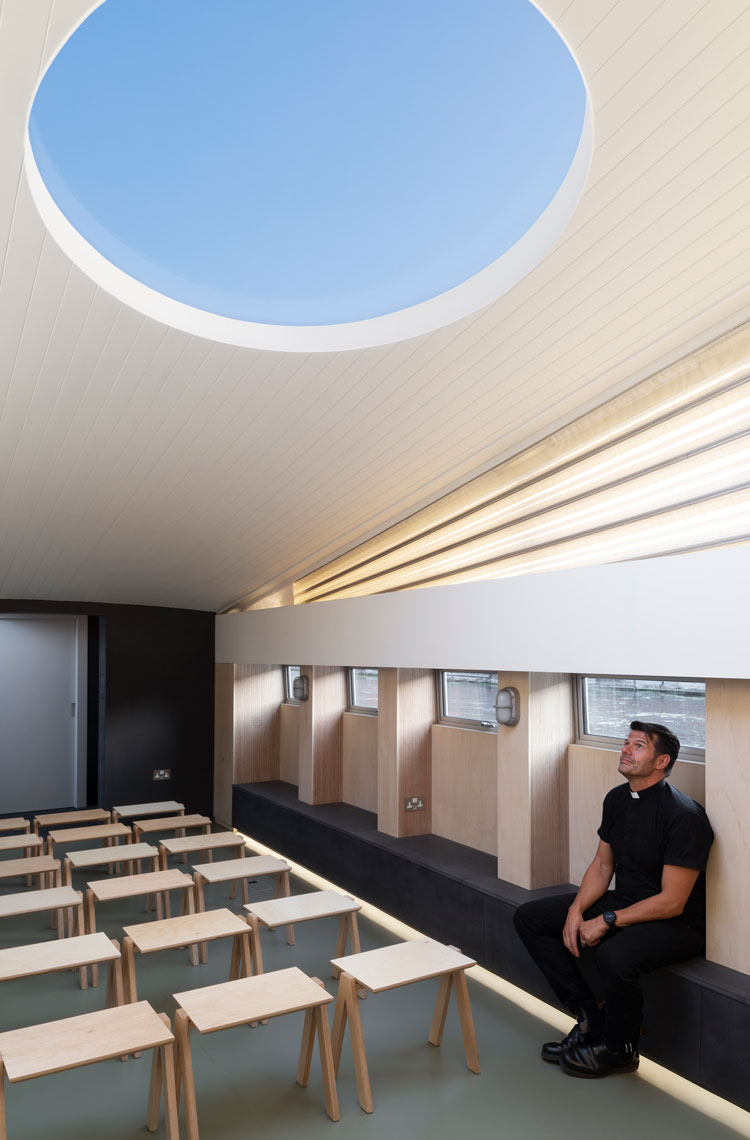 Stepping down into this wide-beam narrowboat, the smell of fresh timber enfolds you, as does warmth from the underfloor heating percolating through the moss-green linoleum. There is a sense of enclosure and delight generated by the light-plywood that covers the walls and alcoves – each with its own timber bench - and the central, sculptural light feature, a James Turrell-esque cavity in the pop-up roof. On the day of my visit, handmade plywood stools are arranged either side of a short nave leading up to this lightwell, which is positioned strategically above a sleek flatpack altar and presumably arranged so that beams of sunlight play theatrically over its resident minister, the Reverend Dave Pilkington. These stools can be folded up and stored away in integral cupboards at the far end of the boat, along with bespoke demountable trestle tables for workshops or community supper clubs. As Pilkington explains, the role of this floating church is less about preaching and more about reaching out. It truly feels like an inviting, improvisatory space for gatherings of all kinds, which is exactly what the client, the diocese of London, wanted, after the mayor of London identified this huge urban regeneration site as a “key opportunity area” for a new church. 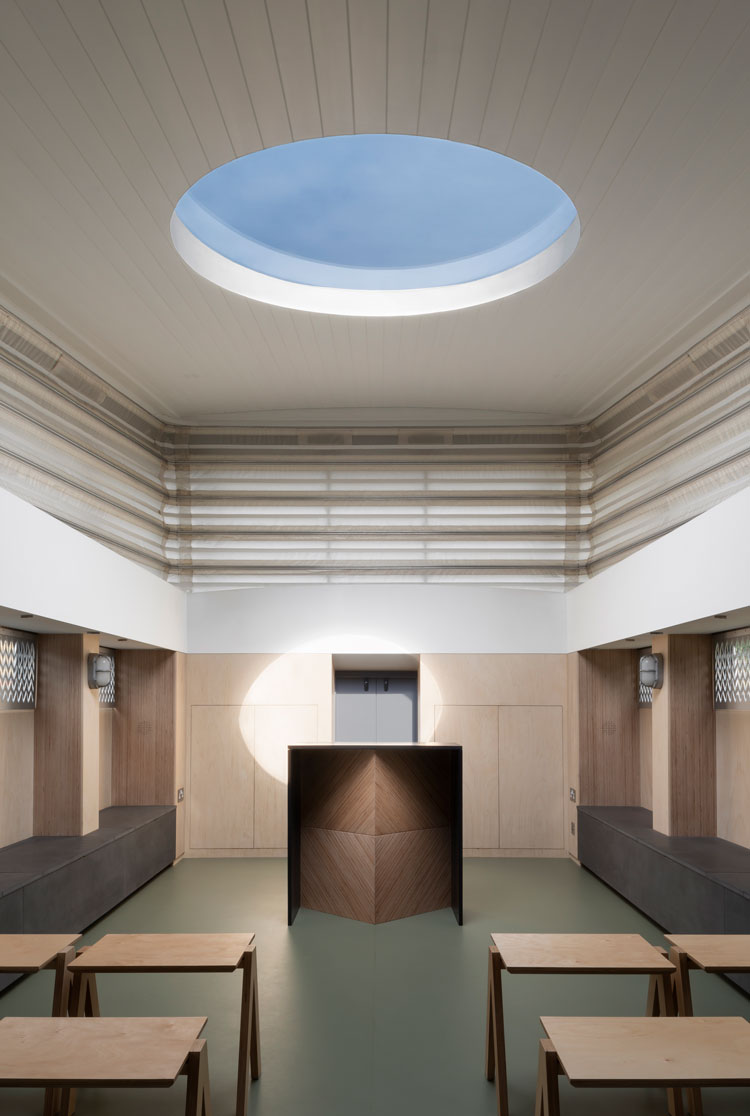 The Lea Navigation waterway runs around and through the Queen Elizabeth Olympic park, an area of declining 20th-century industry that was cleared for the 2012 Olympics, with an ambitious legacy masterplan steered by the London Legacy Development Corporation (LLDC) to turn this east London area into a series of vibrant mixed-use canal-side neighbourhoods. The LLDC, however, refused permission for a permanent church structure, given how little could be known about the demographic or faith requirements of its future residents, so the diocese of London organised a competition to see what temporary spaces might be devised. Denizen Works’ proposal of a boat that could move along the canal as each phase of the 25-year regeneration project was completed hit the sweet spot – or, as Kerr quips, “blew them out of the water”. 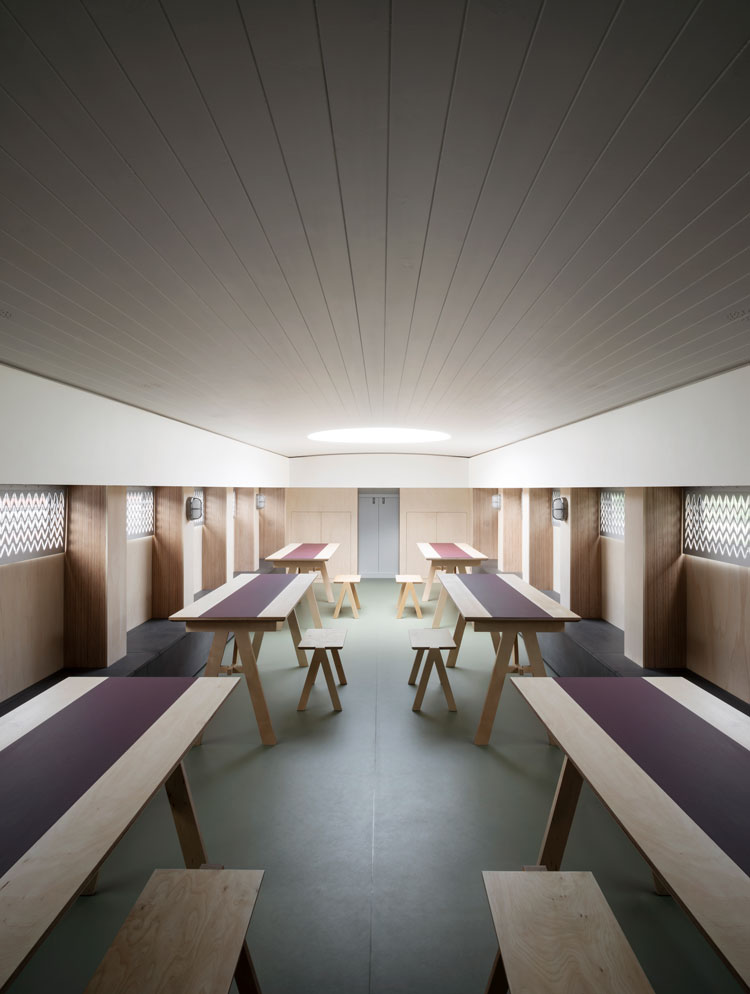 Kerr says: “The concept from the diocese’s point of view was that this goes to five locations over 25 years. It builds up a congregation in each space and they can either build new or create a space from what’s there already … Rather than rushing to build buildings and then trying to get people to come to them, they are finding their congregation first and then discussing [with them], and ultimately providing them with, the building they want or need.”

Is there any precedent for floating churches, I ask. “We did a bit of research about floating churches,” says Kerr, but he attributes the idea to having long ago read the novel Oscar and Lucinda by Peter Carey. “It ends with them floating down a river in a glass church to find new congregations. I always thought it would be wonderful to design a floating church.”

The VW campervan roof, says Kerr, inspired the boat’s pop-up canopy – also a reference to organ bellows – but he says the priority was to get the function right. The ideas for what might take place on the boat ­– yoga or pilates classes, supper clubs, concerts and open mic nights were among the most popular – evolved over years of community engagement, presided over by Pilkington. The structural and design elements also required close engagement. Kerr says: “We were working with a boat builder and they knew what they were doing. We are trying to make architecture within a boat, not trying to overstep our capabilities. It’s the only way to approach a project like this. Our practice ethos is very much about collaboration. We like to make different kinds of projects with different kinds of people.” 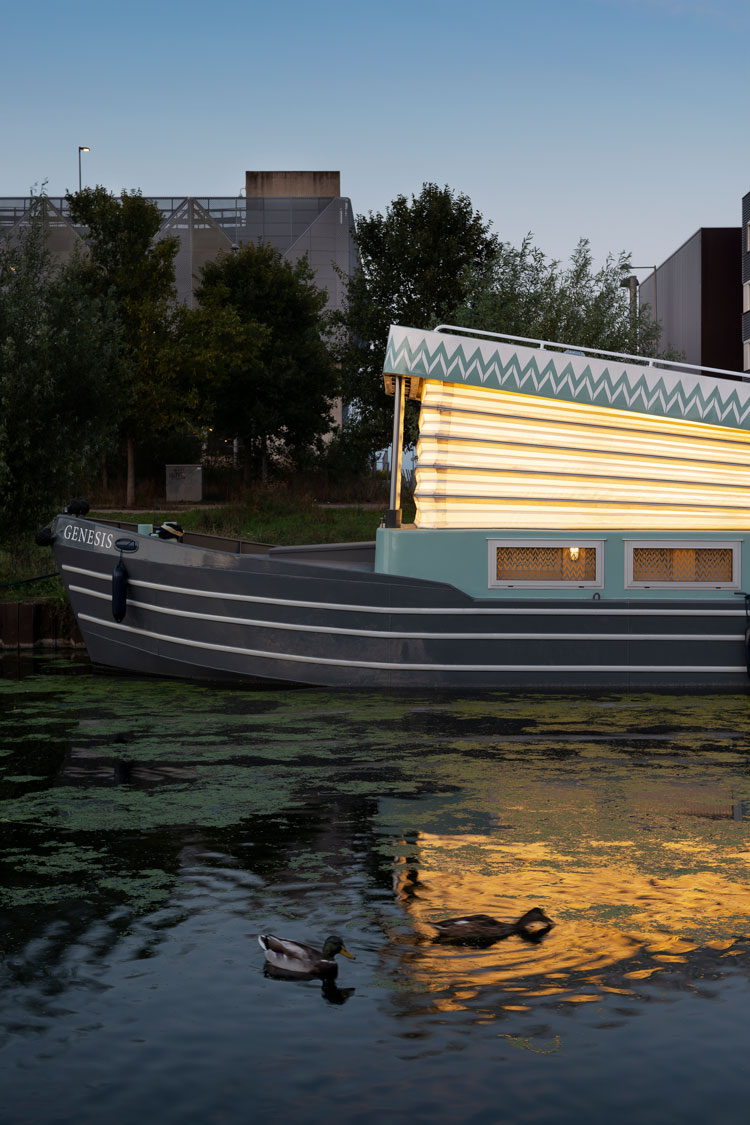 Over various iterations, with the help of Turks Shipyard in Chatham and Tony Tucker, a naval architect, the project took shape. Denizen Works co-director Andrew Ingham says: “We spent a lot of time working on the design, even after it had been tendered. We saw an opportunity to create extra storage in the benches along the sides, which allowed us to spend more money on the lighting.” That presumably included incorporating sculptural threads of LED along each rib of the pop-up canopy, whose shape and format posed new problems for the traditional sailmakers Jeckells and the engineers, who had to ensure the hydraulics were simple enough for ease of repair, but robust enough to cope with regular use. Ingham says: “It was a huge learning curve for everyone, applying that technology or understanding to this new use and frame and getting the engineering right, getting the sail to be snug enough to the frame, but also allow for removal and cleaning or repairs.” In the end, Velcro provided the answer for the latter. 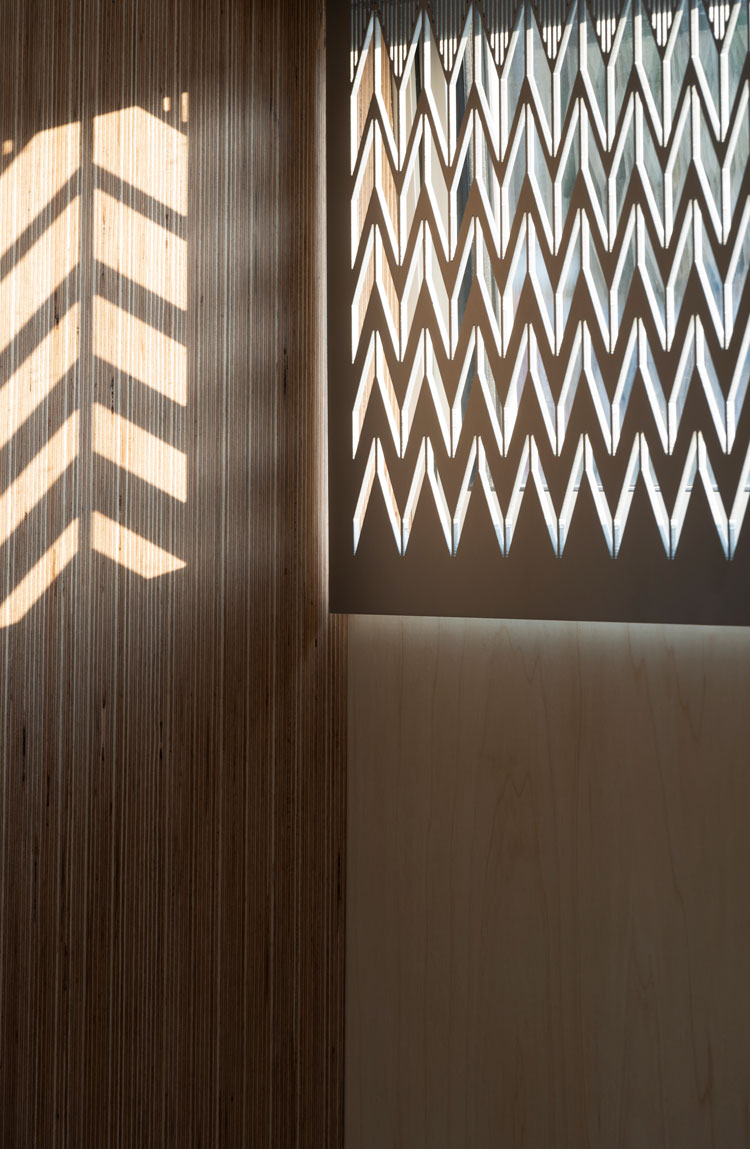 Operated by a push button, the roof deflates so that the barge can pass under low bridges. When fully raised, the head height of the boat reaches 3.6 metre (11.8ft). When it is stationary and the roof is open, it can accommodate 60 people standing, or 40 seated. In motion, the boat can host only 12.

Kerr and Ingham, whose practice has won multiple awards for projects in Scotland and the south east of England, are rightly proud of this, their first completed, standalone structure in London. Kerr says: “It’s a prototype and it is innovative and all that goes with that. It’s been a complicated and sometimes frustrating process. But I think in general we are really happy with it.”

Looking at the degree of thought and skill that has gone into the creation of this unusual space, I am reminded of much older, simpler faith spaces than the grand cathedrals and mosques to which Kerr presumably refers when he says churches were designed to make people feel small. For many centuries, most people’s places of worship included anything from caves to simple clapboard chapels. And it is that tradition of faith space that Denizen Works is evoking here, one that speaks of craftsmanship and compassion rather than some authoritarian omnipresent hierarchy. 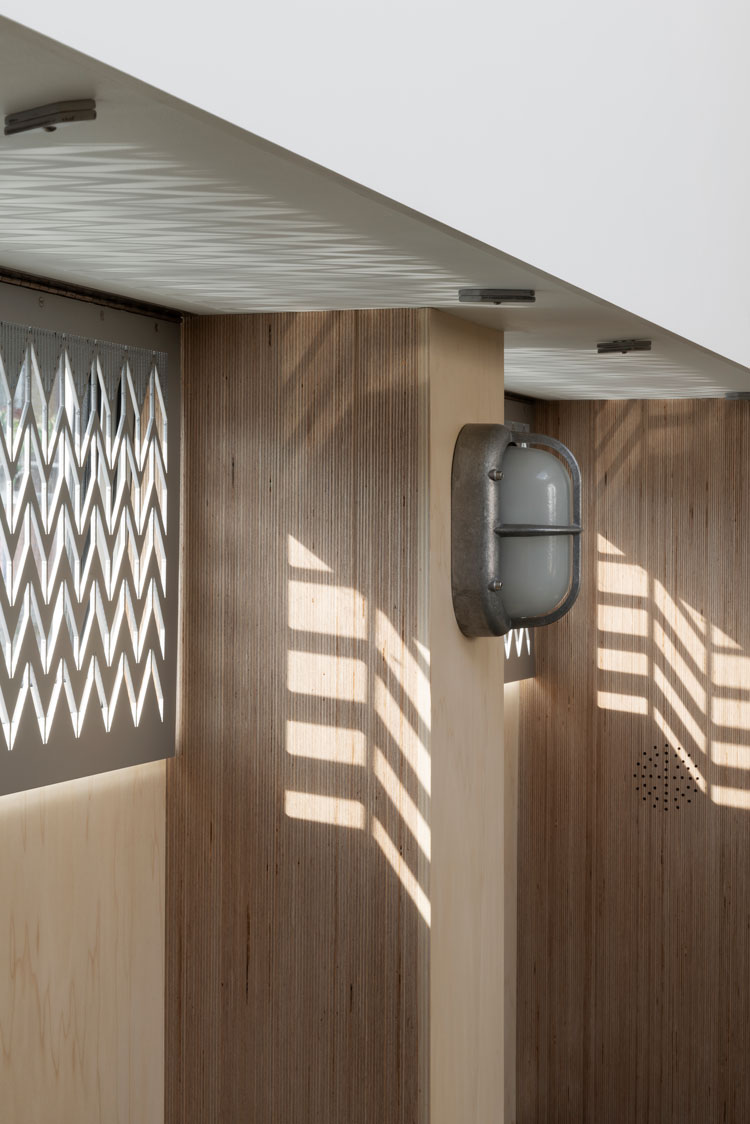 Although the materials are humble, there is nothing rudimentary about the assembly and detailing. One dominant motif is woven throughout: the traditional, zigzag sail stitching used on the expanding roof carries through to so many elements in the interior, including the aforementioned aluminium screens, the legs on the bespoke furniture, even the arrangement of timber grain and angled planes of the altar, all designed by Denizen Works. There is even a frieze around the kinetic roof that continues this theme.

Pilkington had been in residence for only a week when I first spoke to him, but was clearly delighted with how well the project fits his open-minded, humanist principles. He says: “I said I’d like to start a church with people who have no faith and see what happens. I’m really interested to see how people engage with my faith and have conversations from there. This is about making sure it’s for everyone.” One of his most popular community groups is inspired by the 12-step programme of Alcoholics Anonymous. “It’s an amazing formula for spiritual growth. We don’t expect anyone to sign up to a set of beliefs. Our only requirement is a desire for growth. This is about simplicity, care and love.” 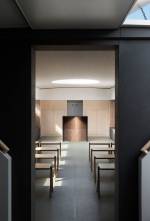 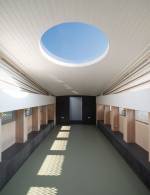 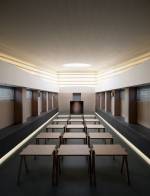 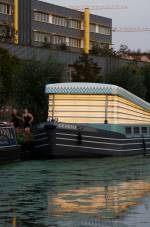