German-born artist Gego once claimed that sculpture was never what she did, but the Henry Moore Institute is absolutely right in putting on her first UK exhibition, says Anna McNay

“Here we’ve only got one job,” explains Lisa Le Feuvre, head of the Henry Moore Institute. “And that’s to write the future of art history with sculpture at the centre. And I want Gego right at that centre.”

Gego (1912-94) was born Gertrud Goldschmidt in Hamburg, Germany, but she emigrated to Caracas, Venezuela in 1939, immediately after graduating from a degree in architecture and engineering in Stuttgart. There, she became an artist, and spent the rest of her life, quite simply, “taking a line for a walk”.

“There is no danger for me to get stuck,” she wrote in 1966, “because with each line I draw, hundreds more wait to be drawn. That is the circle of knowledge with the ring around, you enlarge the inner circle and the outer becomes greater – no end.”1

Gego, whose work involved tangles of wire hanging on strings from the ceiling, drawings on paper using the same wire like a thread and playful sproutings “growing” from the walls, was, nevertheless, clear:  “Sculpture, 3D forms of solid material. Never what I do!” How, then, can the Henry Moore Institute, whose work focuses around just that – sculpture – square the contradiction of adopting and promoting Gego’s work? Would it not be against her wishes?

“Gego understood sculpture as heavy objects that didn’t move, that told you how to behave. They were solid, 3D and static. And look at what she was making: it was defying gravity. When she wrote that note, her work was a counterargument to sculpture. Now, sculpture is ready for Gego. Now, I think, we can claim it as sculpture. Part of our job here at the institute is that we need to constantly question what sculpture is, what sculpture might be. And this is sculpture. It does everything that sculpture does. It’s an object that’s dealing with gravity, or that’s defying gravity, it’s working with light, you walk around it, you feel it in space.”

Le Feuvre has wanted to bring together this exhibition for more than a decade, and, accordingly, it is impeccably researched, and presented very much following the artist’s wishes, mirroring how she curated her own shows during her lifetime. There are virtually no plinths, and works are hung from the ceilings, casting shadows, turning gently in the interior breeze, allowing visitors to walk around and, in most cases, underneath them. They hang like chrysalises, the delicate backbone of structures, distorted, pushed out of shape where butterflies have emerged. Others seem celestial in nature, the connecting nodes like constellations of stars, the spherical objects like planets, clustered and dispersed, the gallery becoming a galaxy.

Gego herself referred to her work as bichos, a Spanish word that doesn’t translate well into English. Literally “bugs” or “creatures”, it may be used colloquially among friends to mean “you silly, insignificant, small thing”. But Gego used it for her works to reflect her sense of their having a life of their own: if something is a creature, you can’t control it. It is an animate being. There is no truth, there is no predefined way in which to behave around it. The one larger piece that is displayed in a glass box on a plinth, Bicho 87/9 (Bug 87/9) (1987), seems somehow wrong: imprisoned, restricted, unable to spread, move or breathe.

Reticulárea (Area of Nets) (1975), on the other hand, seems to have made a bid for freedom, growing up the gallery wall like a climbing plant that entangles and entwines its tendrils as it reaches up towards the light. Aplique de Reticulárea (Reticulárea Wall Appliqué) (1969) similarly appears to sprout from the wall, to be setting off on an exploration.

Parallel to this exhibition, in Gallery Four, the institute is presenting a selection of teaching models and writings by D’Arcy Wentworth Thompson (1860-1948), a mathematician, biologist, zoologist and Classics scholar, whose 1942 publication On Growth and Form provided a mathematical and poetic study of scale, gravity, order and process, informing artists and sculptors throughout the 20th century. Le Feuvre was convinced from the outset that Thompson must have had an influence on Gego, although the experts working in Gego’s archive in Caracas claimed there was no evidence to support this. Le Feuvre followed her instinct and finally struck gold, digging out an annotated copy of Thompson’s book from among Gego’s papers. A model on display of microscopic organisms (Stylodictya multispina), which Thompson compared to snowflakes, is perfectly echoed in Gego’s delicate, skeletal structures, suggestions of life past or life to come.

One small gallery is filled with hanging objects, which just skirt the ground, recoiling and rising up concertina-like, with an implicit sense of movement, jack-in-the-boxes captured and frozen in time. Behind them, on the walls, are watercolour paintings, immortalising the tracks of wire, the line, as it passes.

This is the first solo exhibition of Gego’s work in the UK. With more than 80 individual pieces, it is also the first exhibition at the institute to span the bridge into the neighbouring Leeds Art Gallery. Here, there are drypoints, lithographs and ink works on display, some like the scroll of paper with a line of punched dots that comes out of a hand-cranked music box, others more like unravelled knitting. Hand-drawn, annotated, scribbled-on sketches for installations accompany larger drawings on squared paper, almost like doodles or dot-to-dots. All of them stretch to infinity, a never-ending line, more than 2D, yet not quite 3D. “The line as a human mean to express relacion between points [sic],” writes the artist. “Something that is entirely abstract in the sense: not existing materially in nature.”2 And yet it does – hence the ambiguity regarding the labelling of her work as sculpture. Personally, I would choose to adopt the term bichos. But as for displaying it in the Henry Moore Institute, under its umbrella ethos of sculptural works, I am in full agreement with Le Feuvre, as, indeed, I’m sure Gego herself would be, could she but see the wonderful and tactful installation and curation her works have been blessed with.

References
1. From the draft of an introductory talk by Gego at the Tamarind Lithography Workshop in Los Angeles, 1966 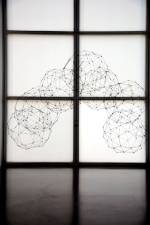 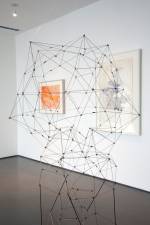 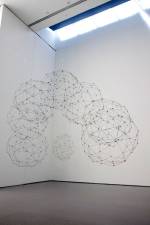 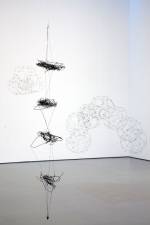 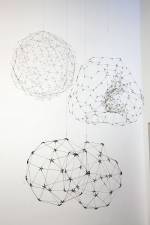