Gertrude Goldschmidt (1912-94), better known as Gego, was born in Hamburg and studied architecture in Stuttgart. She left Germany in 1939 for South America. Gerd Leufert (1914-98) was born in Lithuania and studied graphic design in Hanover and Munich. He emigrated to South America in 1951. They met in Caracas in 1952 and remained together in Venezuela for the rest of their lives. While both had a strong influence on the direction that Latin American art took – in particular the geometric abstraction and kinetic art that flourished there from the 50s to the 70s – it is Gego who is now the more celebrated.

Shown together in this small gem of an exhibition at Hunter College, it is a welcome addition to the growing number of exhibitions on modernist art from the region. Sensitively curated and installed by Geaninne Gutiérrez-Guimarães with Sarah Watson and Annie Wischmeyer, the works on view present an intimate, back-and-forth dialogue between two artists who knew each other well. Beyond familiarity, they shared an aesthetic sensibility based on their respective early training in architecture and design that was non-objective, sophisticated, rigorous, and sparked by a romance with line and drawing. Works of shared motifs – many on paper and modestly sized – were hung next to each other in Hunter College’s recently revamped 68th Street gallery, the similarities and differences exhilarating to note. Where Gego fractured a surface with a few bent, skinny lines in ink in a 1970 drawing (a forerunner of her later wire sculptures), Leufert both drew on the paper and ripped it, actively engaging the support, to achieve comparable results in a circa 1973 work.

Both were deeply interested in grids, as seen in two drawings from the same period. Leufert, in his Listonados (Strips) series from 1970-74, placed painted wooden strips at right angles to each other to make a frame that enclosed space, or “nothingness.” By 1976, Gego had embarked on her own marvellous signature series: Dibujos Sin Papel (Drawings Without Paper), which she would work on for the next 12 years, several examples of which are on view here, including her own rectangular form outlined in metal and wire from 1979 and another more complex piece from 1985. Often activating grids into fragile, undulating, knotted nets that are ultimately irregular, they also incorporated space into themselves. Suspended, they were hung close to the wall, which served as another ground, the shadows cast by the wire or other industrial materials creating an additional drawing, the entire ensemble in subtle motion as ambient circumstances changed. Meanwhile, Leufert had devised his own handsome, enmeshed, entangled grids and his Ganchos (Hooks) series, which in turn was preceded by his 1964 Amor, a drawing of a knot consisting of a red and black line that connects at the centre of the paper, linked to two hooks at either side and related to Gego’s tensile drawings in space.

While the works are taut with energy and arrestingly, ineffably beautiful, the fluidity of the conversation between the two artists was almost even more so. It was, as evident in their respective works, a partnership that was a love story, one that nourished their individual talent. As Gego said, Leufert taught her “to see and discover,” and she clearly taught him the same. 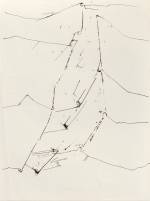 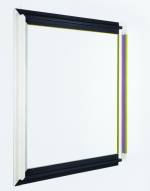