“If language gives meaning and narrative, what are the tools of the artist and architect to provide syntax for things in space? Are the plinth and armature to objects what articles and adjectives are to description?”1

By bringing together works by the Venetian architect and exhibition designer Carlo Scarpa (1906-78) and the American artist Carol Bove (b1971), the Henry Moore Institute asks visitors to consider this question literally as well as metaphorically. How are objects given meaning? When does a found object become an art object? What distinguishes this art object or sculpture from the exhibition furniture on which it stands? What if the sculptures themselves represent linguistic symbols?

Scarpa and Bove each employ strategies of display that seek to imbue objects and sculptures with a new sense of importance, but, at the same time, the exhibition furniture they use – the display case, the vitrine, the plinth – becomes exalted and takes on a supra-functional role. Scarpa once claimed: “There should be no furnishings, only significant presences.”2 Here, his empty vitrines and easel (1956), on loan from Museo di Castelvecchio in Verona and Gipsoteca Canoviana in Possagno, without their art objects, have become artworks in their own right. The patches on the base of the vitrines, showing where objects once stood, evoke a ghostly presence, calling forth the spirits of sculptural ancestors and ancestral sculptors and suggesting a continuation of line from the classical Greek and Roman through Scarpa to Bove and beyond. The spirit of one passes through the object to the next generation, a sentiment echoed by Bove, who describes a sense of being able to see through time by having physical contact with old objects.3 In fact, when making something new, she seeks to make it look as if it had existed before her,4 blurring the boundaries between found object and art object. “I want to make an object but have it look like a found object,” she says.5

On display here are some of Bove’s arrangements of natural objects: shells, coral, feathers and driftwood – relics of passing time, showing nature’s wear and tear; evidence of geological history. Her works draw attention to the materials’ life cycles: passing from natural living object to debris to art and possibly, eventually, back to debris again. She has spoken of her fantasy that her artworks, “assembled from non-art objects”, might one day “return to a state of non-art”.6 Pavel S Pyś, exhibitions and display curator at the Henry Moore Institute, describes this alternation lyrically as an “alchemical variation”.7

Bove’s Coral Sculpture (2008) is presented on a square of concrete on a bronze frame of a plinth. Such a display could well have been designed by Scarpa. Sometimes Bove’s natural found materials are further combined with industrial materials, such as the steel support in Untitled (Driftwood Bench) (2004), and this combination of unlikely components is something for which Scarpa, too, was well known. A hallmark of his design is the realisation of new forms through old techniques, bringing together heavy-duty steel and metal with traditional Venetian techniques, such as stucco lucido and marmorino plasterwork. His work celebrates the very process of construction, drawing attention to the nature of the materials being used.

Bove often incorporates works by other artists as pointers towards a style, or, as she terms them, “ambiance cues”.8 For example, Conversations with Jorge Luis Borges (2003) suggests “a Borgesian meditation on the nature of time and the elusiveness of reality”.9 To reinforce this point, the shelf-work is accompanied by a metronome. Pursuing this musical reference, for Bove, the interaction between works is as important as the impact of the individual objects themselves. She describes this relationship as being like the notes and the music between them.10

The centrepiece of the exhibition is a restaging of Ambiente, Scarpa’s contribution to the 1968 Venice Biennale. Accompanied by original photographs, Bove has interpreted the display and chosen the exhibition furniture, mirroring Scarpa’s choosing of how to re-present so many classical sculptures in his own lifetime, when recreating galleries and exhibition spaces in Italian palaces and museums. While the more delicate Contafili (1968) and Crescita (1968) sit on approximations of the marble supports originally used, the mammoth six-metre-long steel rod Asta (1968) is bolted to Bove’s For Asta (2014), a fold of hinged steel frames; a portal; a doorway to viewing the objects on display through the eyes of a sculptor. In this instance, Asta is balanced at a precarious angle by its own weight. When it was displayed in Venice, it was vertical between the mezzanine and ground floor. Quite literally, what we see here is Bove’s inflection applied to Scarpa’s work.

Accompanied by Bove’s own monumental sculpture, Cretaceous (2014), an ancient, four-metre chunk of petrified wood bolted directly to an I-beam, the works are seen against white walls, with sunlight flooding in through the skylights of the gallery – a fitting homage to Scarpa in more than one way. His choosing to display Canova’s white plaster sculptures against white walls in his renovation of the Gipsoteca Canoviana in 1955 was controversial by every museum standard of its day. In addition, he created a white cube there with skylights in each corner, which he described as “catching fragments of the sky”.11

Another reflection of Scarpa’s architecture is seen in Hysteron Proteron (2014), a concrete pedestal embedded with brass cubes, recollecting the Rubik’s Cube. Bove describes the work as allowing the viewer to alternate between a Gestalt (formal) and psychedelic approach, whereby the latter only ever allows you to look at an object partially, causing you to get lost in it, whereas the former assesses the object as a whole. The work recollects Scarpa’s cubic gallery at Castelvecchio (1956-73), where the wall is made up of many small cubes within the larger one, inspired by the work of Josef Albers.

Bove is known for her glyphs, strong steel sculptures, referencing language and meaning – appearing flexible, permutable, and imbued with a living energy, yet weighty and fixed. In the small final gallery, Hieroglyph (2013) stands alongside vitrines containing Scarpa’s studies for the Brion Tomb (1969-78), an incomplete project, considered nevertheless to be his architectural masterpiece, fulfilling his wish to “find a pharaoh” for whom he could create a pyramid.12 The complex geometric forms in poured concrete – Scarpa’s own glyphs, inspired by the cemetery of ancient Islamic tombs on the island of Lamu, off the coast of Kenya – posed a real challenge for his builders as they had to be made first in the negative. He made thousands of drawings to communicate these ideas and was a remarkable draughtsman, who could draw two separate sketches at the same time, one with each hand. Scarpa wanted to create a place to visit the dead “without the shoeboxes of a village cemetery”13, and once said that when it was finished, it would be dead, again echoing the notion of sculptures – and architecture – as living beings. As it happens, the tomb remained unfinished because Scarpa fell down some stairs in Japan and died in 1978. His presence is, however, felt in this exhibition – every bit as much as Bove’s. Perhaps some “alchemical variation” has brought him back, or, at the very least, preserved his spirit in some alternative form? 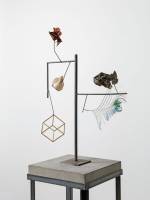 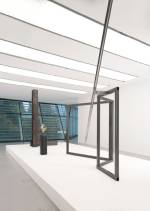 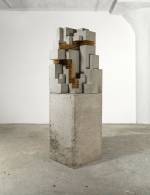 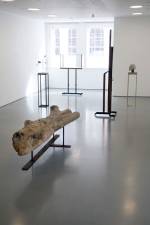 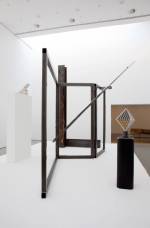