Well, well, round two on our shores and London’s signet-ring art fair’s here to stay. They had predicted that all those who signed on for last year’s daunting and costly round trip to a derelict sports field on Randall’s Island, to be met by an overlit tent sheltering too few galleries and too long lines for a $7 cup of coffee, were not going to return this year for more punishment. Seemingly in collusion, at the stroke of the 11 am VIP opening, the heavens cracked open, spewing a downpour that only Swiss mountaineers are equipped for.

Well, well, I’ve dried the mud off my Manolos and am writing to tell you that attendance was up, caravans of buses smoothed the to and fro for $5, the spacious serpentine tent had been extended to accommodate 180-plus galleries, bottled water could be had for $2, and any remaining sour grapes were crushed underfoot by Mayor Bloomberg, who fast-walked his four bodyguards down the three isles at noon as though art were an exercise.

Always interested in zeitgeist, I paced up and down to note what popped and what didn’t. Remarkably, for a fair positioning itself on the edge, there was a reticence of photography, not all that surprisingly, since no photography dealers per se were included. Pushing the medium to new limits, the majority of the photographs on display pioneered a more complicated visual vocabulary, so aggressively translating Johns’s “do something to it, then do something else to it” into manipulations that had scanned, ripped, painted and re-photographed the original image, as to deserve a new nomenclature.

Video, so recently dominant, was represented by only a handful of works – even Catherine Opie was exemplified by a still photograph – though one of my top ten picks was a 20-minute black and white poem-in-motion at Marianne Boesky that assembled landscapes from edibles. And, confirming that the market has evaporated for screaming Chinese portraiture, only Lisson, Boers-Li, James Cohan and Beijing’s eminent Long March Space presented Chinese artists who now matter.

Not happening at all was “Frieze Sounds”; I hung around a latterday maypole strung with earphones for 25 minutes (an eon in fairtime) but no one hooked up. Nor was there much action in the printed matter booths, though they chewed up a startling amount of pricey tent footage – perhaps because engaging with periodicals, unlike art, isn’t free.

And only the intrepid ventured outdoors to view Frieze Projects, whose directive to selected artists to “reflect on the social and collective spaces of the fair and, in general, on the shared experiences of viewing art” was realised by such as Andra Ursuta with a virtual cemetery “where art goes to die”, and Maria Loboda with a “garden that transforms nature into an abstract form”, concepts that remained, until the clouds lifted, as unclear as the brief. An exception was the Paul McCarthy’s outsized crimson take on Jeff Koon’s Balloon Dog that anchors the entrance – a calculated photo-op worthy of Anna Wintour, and a forewarning of appropriation, which did not, however, prove to be the fair’s over-riding statement.

I was only three booths anti-clockwise into my tour of it when the inadvertent theme (“direction” in artspeak, “trend” in blogspeak) bounced around on my notepad. Hailing from town after town – Bucharest, Cape Town, Brussels, Cologne, Salzburg, London, Dusseldorf, Dublin, Los Angeles, Oslo, Istanbul, Vienna, Rome, Sau Paulo,Tel Aviv, not to mention New York, gallery after gallery was showing flat-out, unapologetic, freshly painted abstract art.

How do you explain it, I asked the luminaries I encountered along my mini-survey of the evident phenomenon:

“Like every other historical reference, art repeats itself”, shrugged Miami collector Rosa della Cruz. “I’d say it’s been coming back for five years or so”, chirped art consultant Stephanie French, who came back later to tell me, “I see what you mean, its everywhere”). Testing the commercial waters, I asked veteran gallerist Peter Blum if he had sensed abstraction in the air and nudged his artists toward it. “I don’t lead artists, I follow them” he shot back. “Maybe it’s been so out of fashion that a new generation of artists is seeing it as cool”, offered artist Julian Lethbridge, master-practitioner of abstract painting since the 70’s. “Well, it’s never quite gone away”, noted uber-gallerist Barbara Gladstone. Former Guggenheim director Thomas Krens copped out entirely; “I’m not an art fair person”. Ever quotable, Fluxus legend Irving Blum volleyed; “It’s the mode, get over it!” More trenchant, the Whitney’s print curator David Kiehl asserted; “It’s all about what Art Forum writes about”.

Which about summed it up for a slew of recent work channeling Ad Rheinhardt, Rothko, Joan Mitchell, Clyfford Still and Diebenkorn, but not for those crisped with a morning freshness, or those commenting slyly on artspeak (four square-on-squares with blank centers bearing titles of four controversial museums) – all young artists attempting to find a way in to an established way of seeing that they think newly viable.

What else? Happily, there is a strong representation of women artists. Unusually, there is very little secondary market material. Unexpectedly, there’s a plethora of some usual suspects such as Gormley, Abramovic, Bourgeois, Kapoor; a low attendance of others, such as Struth, Hirst, Prince and Warhol; and enough exciting young artists (Huma Bhabha, Sam Moyer, Stewart Uoo) to make your head swim. There are visual puns, like a bowler hat worn by the floor and a red line crossing to a sign that reads “don’t cross this red line”. There are useless mechanisms – one that waves its arms around in a crazed homage to Tinguely, another concocted out of leather and steel that would prove lethal had it wires to plug in. And there are the usual heavy demands on one’s interpretation of “art”, as with the imagined architecture of piled planks, towered black boxes, and stacked bars of cement; boring interventions that wreak destruction on walls and floors; and the flurry of uncharming ephemera like a puddled black garbage bag and rags draped over sticks which inadvertently – given the current happening at the Metropolitan Museum - invoked punk.

There’s fun stuff – a centrepiece by Brazil’s Valeska Soares that runs florid glassware down a long mirrored table; a green onyx dining room table that you can play like a xylaphone, and a low-slung lounge chair strapped with belt buckles that at once invites and repels. There’s a compelling y’all-come-sample rendition of FOOD, the famed sixties’ eatery undertaken by the momentary art collective of Tina Girouard, Gordon Matta-Clark and Randal Arabie which served Neolithic feasts composed from, in Keith Sonnier’s memory, stuffed smoked pork stomach, bone marrow and long trays of ducks. And performance artist Liz Glynn’s less well-conceived come-on, hugely frustrating for all but the lucky random 200 given keys to a secret door which leads to a bar where ingredients are provided for cocktails and conversation. There’s the usual smattering of neon (Haegue Yang, Jennie C. Jones); assemblages of detritus (William Pope L., Sarah Sze); and word-art, as in a liquid-mirrored ART, Jack Pierson’s historic DRUGS and an acrylic marbled World. But virtually gone is yesterday’s fascination with skulls-and-bones, Goth, activist rage and in-your-face shock; Thomas Ruff’s blurred nudes are benignly erotic (ditto, Johannes Kahrs’s frontal wannabees and Ryan McGinley’s magazine ads) Tracey Emin’s auto-bare-ography felt somehow dated and, like Sharon Hayes’s manifestos, innocuous.

Not for a moment, however, did interest lag. What I came away with above all was the very 2013 understanding that if the energy remains this high, and the quality this good, there cannot be too may art fairs, because it has become inescapably obvious that the new way of selling, viewing and buying art is no longer in galleries, but at fairs. In a culture spent largely solo behind a computer screen, the generally sparsely attended gallery experience presents art as you might meet it in a gym in your t-shirt and ripped jeans, whereas fairs offer a dynamic interaction with glamour. Today’s art lover asks something more of strong work with a pricetag than just a jpeg, or even a quiet gallery encounter. Art is seen now as a component, albeit an expensive one, of the shared aura we want to inform design, starchitecture, curated eateries and high level meet and greet. Horrors, you cry? Art should return to its pedestal? Irving Blum would retort, it’s not going to, so get over it. People, Agnes Martin once said, are like herd animals; we like to rub up against one another. Art experienced collectively gives humanity public definition, imprimatur and yes, glamour. 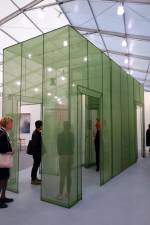 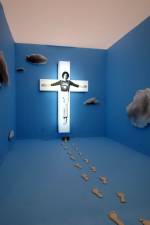 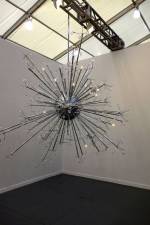 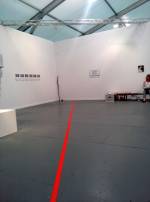 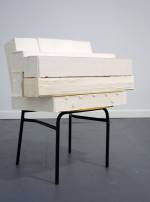 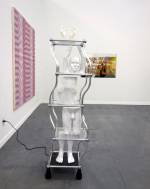 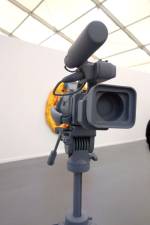 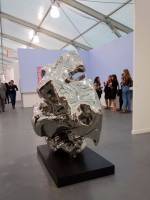 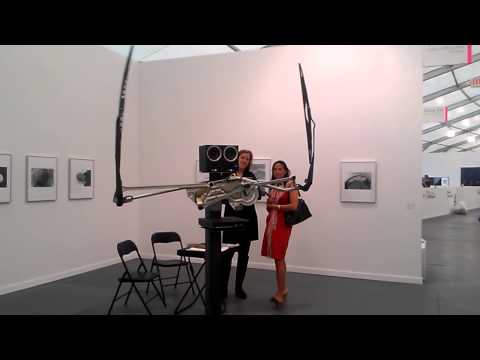