This exhibition of Bowling’s work is colourful, joyous and long overdue. Covering the entire span of his artistic career, it reveals for the first time the importance of this overlooked artist 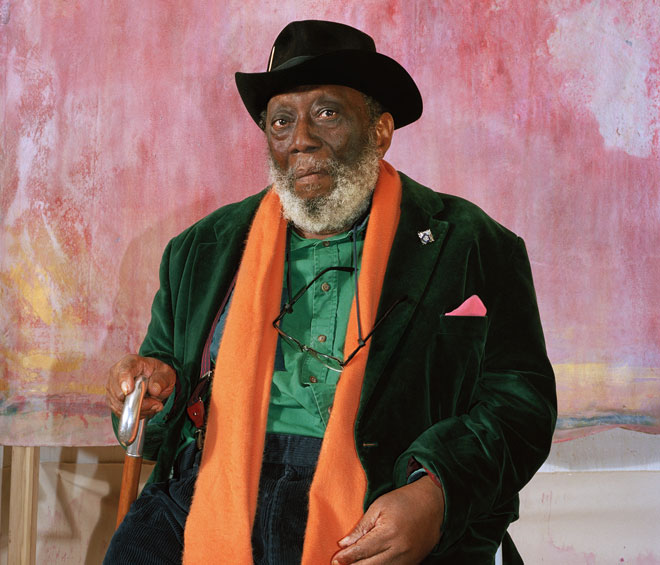 The art world seems to be in agreement, for once, that Tate Britain’s exhibition of work by the painter Frank Bowling (b1934) is long overdue. The curator, Elena Crippa, presents us with a riot of colour, emotion and serious intent in Bowling’s hugely varied approaches to painting, from the 1960s to the present day. 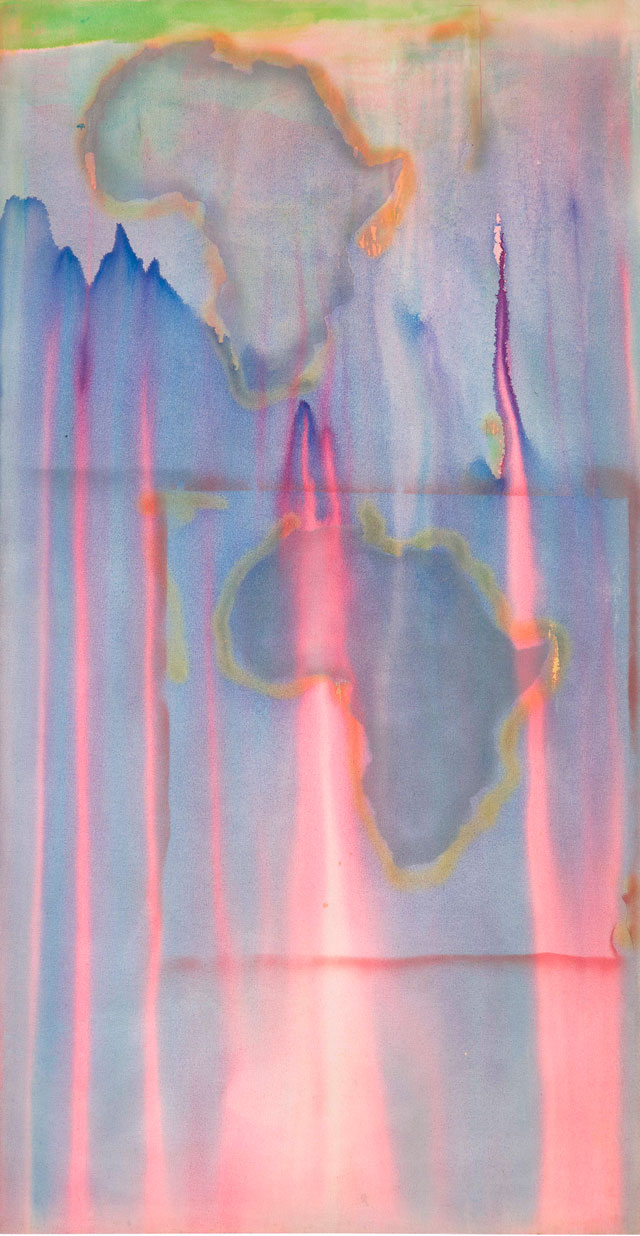 Bowling was born in the town of Bartica in Guyana (then British Guiana). He moved to the nearby town of New Amsterdam with his family in 1940. Then, in 1953, aged 19, he travelled to London as part of the Windrush generation. Following two years’ service in the Royal Air Force and time exploring the possibility of becoming a poet, Bowling enrolled at the Royal College of Art (RCA) in London, studying painting there from 1959 to 1962. He was in good company at the RCA, with fellow students including Derek Boshier, David Hockney and RB Kitaj.1

While the exhibition is largely chronological in form, it is structured around nine themes, which are informative and creative in their interpretation of the paintings on display. The first room of the exhibition is devoted to Bowling’s early life, his politics and the personal narratives that shaped his work. During this period in his career, Bowling used figuration and abstraction. He also explored more formal concerns in his painting as his interest in geometry and colour theory fed into the shape of the canvas and the composition of the painting. While the importance to Bowling of his mentor, Francis Bacon, is clear in many of the works in this room, the diamond shaped canvases of other works perhaps owe more to American artists of the period, such as Kenneth Noland, and already we can begin to see the breadth of interests and influences in Bowling’s work. 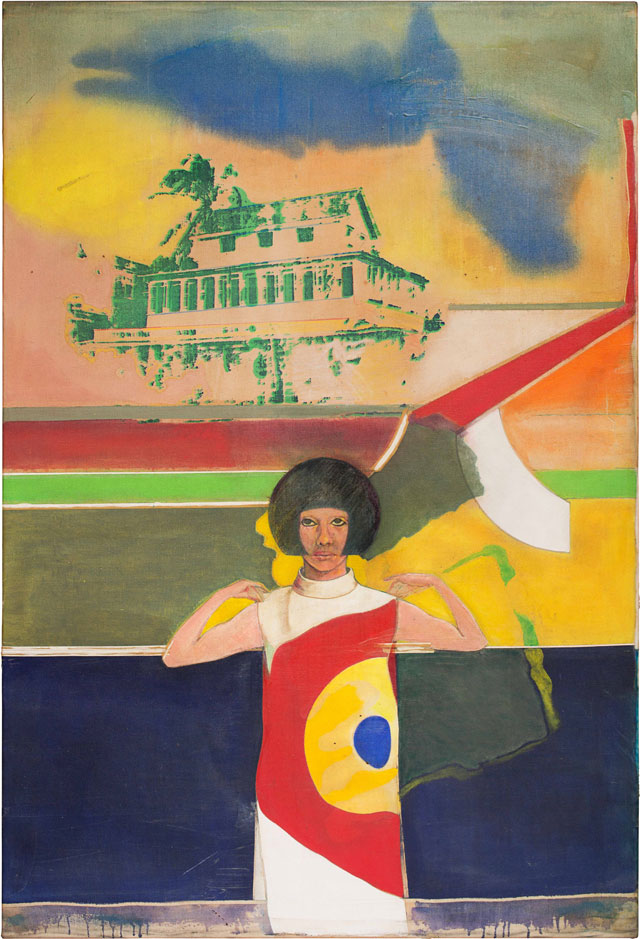 The next room, covering works from 1964 to 1967, shows something of the many changes in Bowling’s life at this time. In 1966, he moved to New York and began using photographs and magazines as sources for paintings. For me, the most striking work in this room is Cover Girl (1966). He also began to use stencils at this time and his former family home and his mother’s store, Bowling’s Variety Store in New Amsterdam, began to feature in his work, too. All of these sources are brought together in Cover Girl, where personal narratives jostle with images from the popular Sunday colour supplements.

Bowling’s iconic map paintings fill the third room and they are mesmerising. As he manipulates stencils and, later, projections of maps in the making of the works, these layered and illustrious images also negotiate the complexities of displacement and diaspora, including Bowling’s own. Made from the mid- to late-60s onwards, the map paintings formed the basis of his solo exhibition at Whitney Museum of American Art in 1971.2 Around this time, from 1969 to 1972, a period when intense debates took place around questions of “black art”, Bowling was also a contributing editor for Arts Magazine in New York.3

The poured paintings gathered together in the fourth room of the exhibition reveal Bowling’s interest in formalism in modernist painting. His friendship with the art critic Clement Greenberg was important in confirming modernist painting as a legitimate strategy for Bowling. He had first met Greenberg in late 1971 and later said: “Clem was able to make me see that modernism belonged to me also, that I had no good reason to pretend I wasn’t part of the whole thing.”4 Working in studios in New York and London, Bowling built a mechanism that enabled him to pour paint and tilt the canvas, so exploring the elements of chance and control in a single artwork. 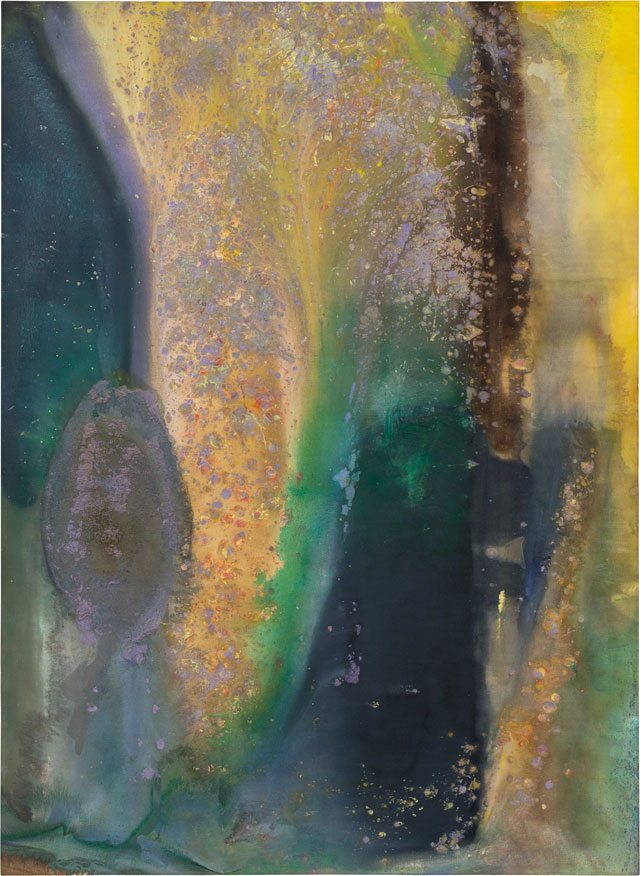 The fifth room contains works such as Ah Susan Whoosh (1981), where Bowling intervenes in the flow of paint and colour combinations he had explored for the previous decade. Now he uses ammonia and pearlescence, applying splodges of paint by hand and producing marbling effects. The impression is of alchemical changes, wholly fluid and open, inviting individual interpretations. In the works in room six, which date from the 1980s, Bowling begins to use different materials – acrylic foam, metallic pigments, chalk, beeswax and glitter. In these quasi-sculptural works, the heavily textured surfaces of the paintings often conceal found objects such as plastic toys or packing materials. 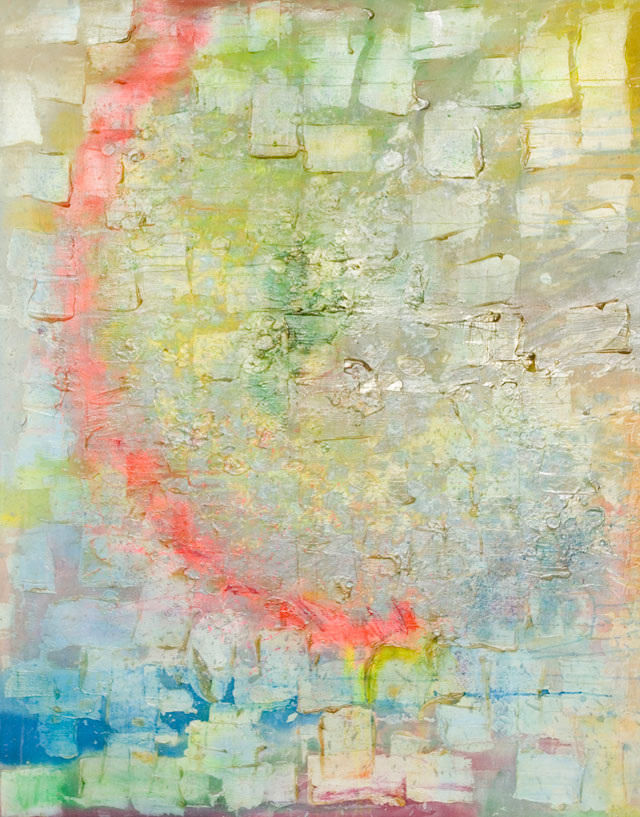 Room seven brings together four paintings completed in 1989 and they are a sheer delight to experience. Here, we see Bowling at his very best, bringing together his engagement with abstract expressionism and his deep admiration for English landscape painters such as Thomas Gainsborough, JMW Turner and John Constable. This was also the year that he travelled back to Guyana for the first time and recognised the important quality of the light there for his own paintings. This eclectic combination of influences results in poetic works such as Sacha Jason Guyana Dreams (1989). Bowling’s colourful acrylic and gel paintings of the 90s appear in the exhibition’s penultimate room. In a new departure, he began to layer and stitch canvases together using staples and foregrounding the materiality of the works.

The final room of the exhibition gives a real sense of Bowling’s continuing invention and reinvention in his painting. There is boldness and confidence in his improvisation as he continues to paint every day, exploring new materials and techniques.

This exhibition is a triumph. Go and see it. 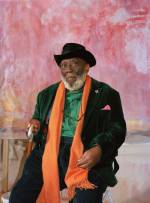 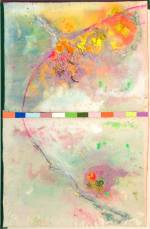 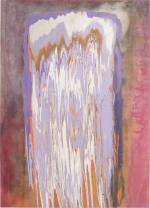