Francesca Woodman: On Being An Angel

Francesca Woodman: On Being An Angel

Influenced by surrealism and the Gothic revival, as well as speaking to the contemporary 1970s feminist zeitgeist, Francesca Woodman’s photography offers a timeless representation of a young woman on the cusp of adulthood

The sad thing about Francesca Woodman’s work is that it cannot be reviewed without hindsight and reference to the photographer’s premature death at the age of 22, when she jumped from a building in East Side, New York. As with her contemporary, Ana Mendieta (1948-85), who died falling from a 34th floor apartment in Greenwich Village, critics and academics have sought to see her work as a premonition of what was to come, with the female subject – commonly Woodman herself – melting into the background, becoming indistinguishable from the wallpaper or crumbling stone of the derelict building, “anticipating her own disappearance”.1 Woodman’s photographs, like Mendieta’s, often depict a silhouette or trace, a blurred impression, a delicate and ghostly absence of the subject, suggesting a sense of has-been or might-have-been. Did the teenage girl foresee her untimely end?

This is, in fact, rather less likely than it might seem. Woodman (1958-81), born into a family of artists – her father, George, is a painter and photographer, and her mother, Betty, a ceramicist – was, by all accounts, a quirky but cheerful girl until the summer before her death, when she became depressed at a souring relationship and her lack of professional success. She first attempted to kill herself in the autumn of 1980, leaving a note to a friend, which said: “I would rather die young leaving various accomplishments, some work, my friendship with you, and some other artefacts intact, instead of pell-mell erasing all these delicate things”2 – an interesting choice of words for a photographer whose deliberately blurring technique, caused by her long exposure times, effaces existence and certainty from her works. Surviving, Woodman was subjected to psychiatric treatment and moved back in with her parents in Manhattan. Things seemed to be going well but, on 19 January 1981, she succeeded where she had previously failed.

Woodman began taking photographs at the age of 13, when her father gave her a Yashica 2¼ x 2¼. Her earliest picture, on display in the current exhibition, co-organised by the Moderna Museet, Stockholm, and Foam, Amsterdam, is Self-Portrait at 13 (1972), in which she sits at the end of a bench, her face entirely hidden by her long hair. This image – an early selfie, with the rod she used to release the shutter visible in frame – bears strong similarities to a portrait of Joseph Cornell taken by Duane Michals that same year in New York,3 showing Woodman’s deep awareness of the contemporary art world by which she was surrounded. She left behind approximately 800 images, of which only a quarter has been seen by the public. Almost all were taken in black and white, with a long exposure and soft focus. Most were probably the result of homework assignments during her time at the Rhode Island School of Design (1975-79), with a year spent in Rome (1977-78). Woodman was fluent in Italian, having lived there for a year (during second grade) and spent childhood summers on the family farm near Florence.

This overview exhibition, On Being an Angel, takes its name from a 1977 series and includes 102 photographs from Woodman’s short but intense career, displayed in series, and culminating in her final large-format diazotype experiments of 1980. There is also a looped film projection of six short videos.

Woodman’s works show an overt surrealist influence and make use of many surrealist motifs, including mirrors, gloves, bowls and birds. She also often shrouds her subjects in white sheets, like Magritte. During her year abroad in Rome, Woodman paid frequent visits to the Libreria Maldoror, a bookshop-gallery that specialised in work by and about the surrealists, and her work has been described as “a playful meditation on the opening question – ‘Who am I?’” – of André Breton’s Nadja (1928), a novel she reportedly read attentively.4 Woodman was discernibly also inspired by the Gothic revival, as evidenced by her predilection for using ruins and abandoned buildings as her stage set. Furthermore, Untitled, Boulder, Colorado (1972-75) sees her subject scrambling through a Victorian tombstone, as if transiting from one realm to the other. Similarly, a series of untitled works from Rome, 1977, shows Woodman alternately hanging from a doorframe and weightlessly levitating – hesitant between two states or places.

While much writing on Woodman’s work evaluates her images in light of her suicide, describing her portraits as attempts at self-effacement, other critical analyses take a 180-degree spin and describe her figures as emerging from the background and seeking to claim their space. I see them far more as disappearing acts, figures striving to hide themselves, to take up less space, but that does not mean I see them as the work of someone wanting to die. Rather, they are the work of your average teenage girl and, latterly, young woman, seeking – and perhaps, at times, struggling – to come to terms with her changing body and mind. She is growing up and not sure of who she is or who she will become; where is her place in the world? The works effuse late pubescent angst and a lack of coherent identity.

In the series Providence (1976), one photograph is annotated with the hand-written text: “I could no longer play. I could not play by instinct.” Katharine Conley reads this in the context of Woodman’s piano playing,5 which certainly is a possibility, given two further annotations in the series, which read: “And I had forgotten how to read music” and “Then at one point I did not need to translate the notes; they went directly to my hands”, but might it not also be understood as an elegy to lost childhood? To losing the ability to be carefree and innocent? To losing the creativity of youth and adopting the repetitive habitude of adulthood?

Some suggest that the ambiguous gestures of Woodman's body, further accentuated by the intentional blur, are reminiscent of Jean-Martin Charcot's images of hysterical women.6 The postures in the On Being An Angel series, where Woodman is bent backwards and the viewer can see only her bare breasts, recollecting Man Ray’s Anatomies (1929), for example, could easily depict someone in an arc of hysteria. Self-Portrait talking to Vince (1977) seems equally impassioned, with a tape appearing simultaneously to spill out of and seal shut the subject’s mouth. Is she trying to speak out? Be heard? Who or what, then, is chastening her words?

If there is a sense of imprisonment, however, this is most apparent in Woodman’s Space2 series, where she places herself inside a glass vitrine, crouched on all fours, like a caged animal. In her journal, Woodman describes the idea of “a contained force trying to be freed”, but does she want to become seen or unseen? In much of her work – notably this, the From Space2 and the House series (all 1976) – Woodman’s square format composition is concerned with boundaries, or the lack thereof. There is a merging between the house and the body: the young, fecund Eve becomes the decrepit, crumbling ruin. The child grows up.

Woodman was working at the same time as Mendieta and the first wave of feminist artists that included Judy Chicago (b1939) and Mary Beth Edelson (b1933). Although she was not overtly feminist herself – once writing of an (unnamed) artist she met: “She is feminist in a not too creepy way” – there are overlaps in subject matter and style that cannot be overlooked, particularly with the work of Mendieta. Silhouettes, naked female bodies contorted in their attempts to find a fit, compressed against sheets of glass, and absenting themselves from the image – why Woodman’s photographs have not been considered more alongside her contemporaries, I do not understand.7 Admittedly she was younger and a student, clearly responding to older, more patriarchal art movements in her work, but the features shared with her peers are striking. A sense of the zeitgeist, maybe, but also a timeless feature of the young woman’s quest to grow up – to readapt from living as a caterpillar to becoming a butterfly. Sadly, this is a metamorphosis that Woodman never fully completed. 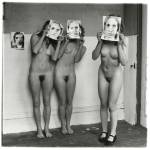 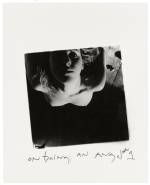 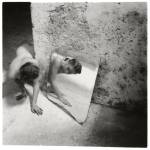 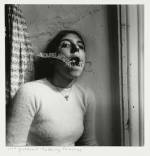 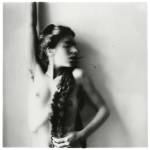