Fox Talbot: Dawn of the Photograph

Fox Talbot: Dawn of the Photograph

This exhibition tells the story of the birth of photography, exploring the vision of the Victorian inventor William Henry Fox Talbot, alongside those of his contemporaries in France, such as painter and set designer Louis-Jacques-Mandé Daguerre 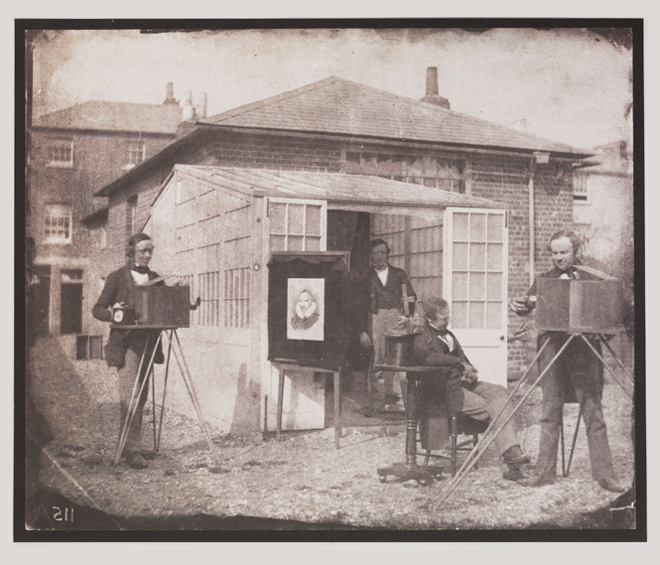 The door is open in this picture. A broom leads your eye to the interior that lies beyond the frame. A lamp is thrown into relief on the wall. As you look at the image, you can see geometry in the play of light across the surface. This light reading brings to mind symbolic associations. The Open Door (1844) is one of the early prints made by scientist, inventor and photography pioneer William Henry Fox Talbot (1800-77), who is the subject of an eye-opening exhibition, entitled Fox Talbot: Dawn of the Photograph, at the Science Museum in London.

The still and contemplative scene illustrates the courtyard of Fox Talbot’s estate at Lacock Abbey in England. This quiet image represents one of his own photographs, which illustrated his book The Pencil of Nature (1844-46), exploring the aesthetic and scientific potential of photography. The image is accompanied by a lucid commentary, in which he considers how 17th-century Dutch art inspired him to take photographs of everyday scenes. Fox Talbot writes: “A painter’s eye will often be arrested where ordinary people see nothing remarkable.”1

The groundbreaking book is key to this show, exploring Fox Talbot’s significance in developing a negative-positive photographic process, which would endure for more than 150 years, across the world. Curator of Photographs at the National Media Museum, Greg Hobson, who co-curated the exhibition with Reader in Photography at the University of South Wales, Russell Roberts, says their vision for the exhibition was “to account for Fox Talbot’s contribution to modern photography and to show how his vision differed so radically to those of his contemporary inventors. Central to the exhibition is The Pencil of Nature, the first commercially available photography book and one in which Fox Talbot lays out his manifesto for the possibilities of photography.”

With pictures of Fox Talbot’s family, architecture in England and translations of cuneiforms, as he proposed that photography could play a role in deciphering this ancient language, the exhibition tells the story of a genuine polymath. Yet it casts its net beyond his milieu, to include Romantic images of discovery, bridging the worlds of natural philosophy and modern science, and considering advances in technology among Fox Talbot’s contemporaries in France: inventor Nicéphore Niépce (1765-1833), painter and set designer Louis-Jacques-Mandé Daguerre (1787-1851), and photographer and civil servant Hippolyte Bayard (1801-87).

As Hobson says: “The exhibition explains Fox Talbot’s motivations to ‘invent’ photography and, shows its evolution from a fugitive, fragile application, to a commercially viable one that will transform the modern world. It shows his invention alongside the experiments of his contemporary competitors and demonstrates how his vision evolves both aesthetically and in a wider industrial context.”

It is worth considering the early development of photography. While much debate has taken place over who invented the technology, Niépce is widely viewed as the creator of the world’s first photograph in 1826, taken from the attic window of his estate, Gras, near Chalon-sur-Saône in France, after exposure to sunlight for eight hours. Niépce made the first photograph on a pewter plate and called his process “heliography”, an example of which, Le Cardinal d’Amboise (1827), you can see in the show. Niépce wrote: “Heliography consisted of spontaneously reproducing the image received in the camera obscura by the action of light, with all the gradations from black to white.”2

This drew on a long history of experimentation with the camera obscura, from the age of Aristotle to the Renaissance era and the paintings of Dutch master Vermeer, based on the scientific principle that light travelling through an aperture in one wall of a dark room projects an image on to the opposite wall. Fox Talbot used the camera obscura as a drawing tool on his tour of Italy in 1833. Later, in August 1835, he produced The Latticed Window (with the Camera Obscura), a singular image in his development of the negative-positive calotype process, central to the evolution of photography for more than 150 years, until it was superseded by digital technology.

In 1837, Paris-based painter and set designer Daguerre made a brilliant picture of a corner of his studio, modifying Niépce’s invention, which he called the “daguerreotype”. The clarity and precision of the daguerreotype process is evident in a rare and beautiful picture of seashells, Les Coquillages (1839), from the year in which the invention of photography was publicly announced, which is on display until June. As Hobson says: “There is a once-in-a-lifetime opportunity to see the earliest daguerreotype made by the inventor of the process, Louis Daguerre, shown next to a monumental painting by the artist on loan from the Walker Art Gallery in Liverpool.”

This fascinating exhibition not only includes beautiful images by the inventors of photography, but also explores the constellation of photographers who gravitated towards Fox Talbot, and reveals the aesthetic possibilities of his calotype process. This can be seen in the affecting portraits of Newhaven Fishermen (c1845), made by painter David Octavius Hill (1802-70) and his assistant Robert Adamson (1821-48) – eminent photography historian Beaumont Newhall once described Hill as “the first painter to realise the artistic potentials of Fox Talbot’s process”.3

Meanwhile, the commercial applications of Fox Talbot’s technology are clear in the first book using photographic illustrations, by botanist and photographer Anna Atkins (1799-1871). This reveals how photography gave women a voice in the creative sphere in the 19th century, a focal point of the Musée d’Orsay’s recent survey exhibition: Who’s Afraid of Women Photographers? 1835-1945. Now, as digital technology renders images ethereal, this wonderful show encourages you to appreciate a world of tangible objects, where you can see how the invention of photography transformed the perception of the physical and natural environment.

Hobson neatly sums up why people should visit this show: “The photographs in the exhibition are, with the exception of a small number at the beginning where the originals are simply too light sensitive to display, all original photographs from the very earliest years of photography. Given their very fragile nature, this will be the only opportunity to view these works in an exhibition setting. The unknown nature of the photographs’ chemistry and the known risks of light sensitivity means that these beautiful images are unlikely to be seen again.”