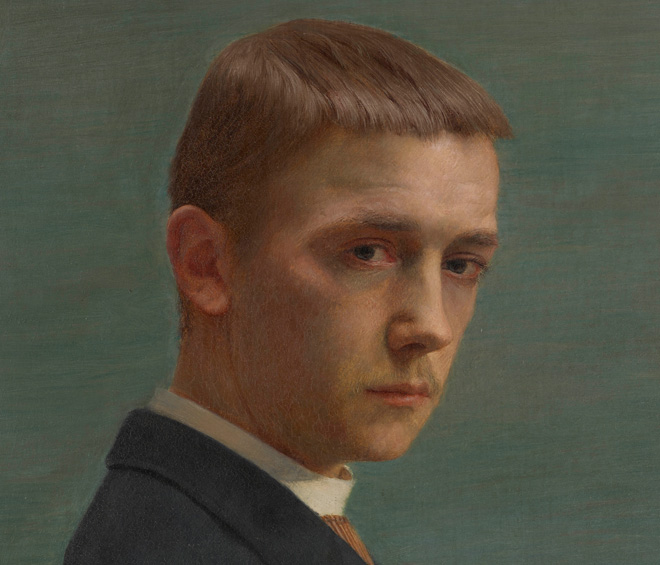 A 20-year-old Félix Vallotton (1865–1925) looks out from his self-portrait with a pallid face and watery, red-rimmed eyes. He is standing against a green-grey background, his chin down, misery etched on his fragile features. He is not scrutinising himself, it seems, but looking at us, the viewer, as though we have just walked into the room at a bad moment. This is one of the images that greets us at the Royal Academy’s exhibition Félix Vallotton: Painter of Disquiet, a show that includes about 100 works from the Swiss-born painter, who moved to Paris at the age of 16.

In a second self-portrait, painted 13 years later, Vallotton’s face has filled out and his expression is less sulky, but a raised eyebrow and tightly pressed lips suggests that he now regards us with suspicion. He seems hardened to the world, and, judging by the bags under his eyes, has had a fair few sleepless nights. Thadée Natanson the editor of La Revue Blanche, a publication that Vallotton illustrated, described a visit from the young artist in 1893. “He walked sideways, careful of his steps,” Natanson said. “If his clothing showed a little thread it wasn’t from not having been carefully brushed. He had the air of being constantly on his guard.” 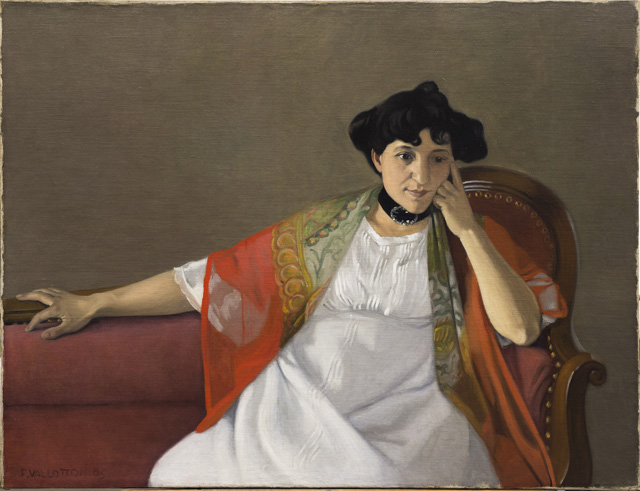 That Vallotton is an inscrutable sort is a point well made in this exhibition. Take The Sick Girl (1892), one of his earliest works, a painting executed with undeniable finesse. A young woman props herself up on her pillows with her back to us as a maid walks in with a tray. The maid doesn’t look at her patient but, instead, looks at us, holding a careful, studied pose, like an actor in training. It is quite unlike similar paintings of the era, in which the ill are visited by concerned family members. Sympathy and human kindness are alien subjects to Vallotton’s art; rather, he is drawn to depict betrayal, violence and indifference. 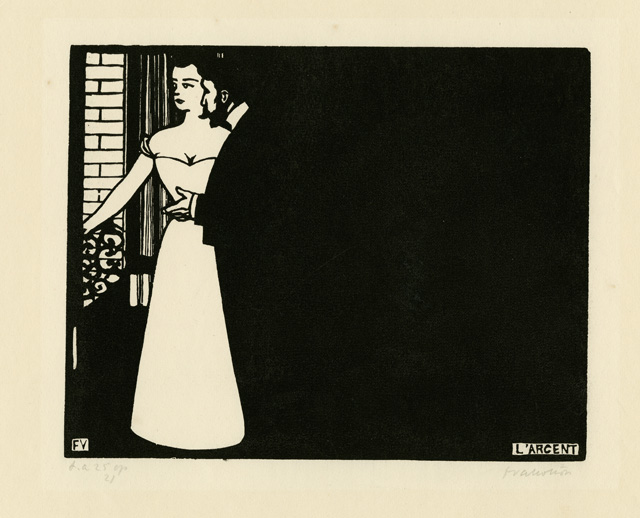 Vallotton’s cynicism was aimed squarely at the hypocrisies of the bourgeoisie and nowhere is it played out more clearly than in his Intimacies series, which was published in La Revue Blanche in 1898.­ It consists of 10 woodcut prints detailing the dark side of married life. One is titled Cinq Heures (Five o’Clock), a euphemism for adulterous goings-on, referring to the hour that men left their offices to visit their mistresses before going home. It shows us a couple embracing in the lamplight of a darkened room. In another image, an adulterous pair drink to the health of a dead spouse.

These prints suggest that Vallotton was lambasting the middle-class duplicities of his adopted country but, on the other hand, he was not above exploiting their wealth. In 1899, he left his girlfriend, the young model Hélène Chatenay, and married Gabrielle Rodrigues-Henriques, a wealthy widow who provided him not only with financial stability, but also with professional contacts. Her previous husband had been an art dealer and we are very much led to believe that this was a marriage of convenience. 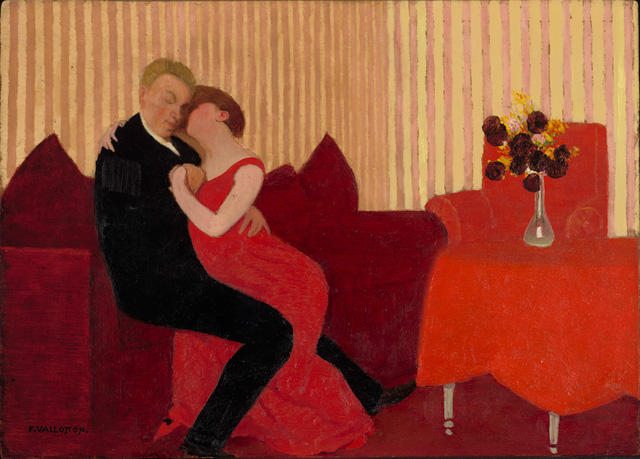 The paintings that Vallotton made in his new role as a husband and a reportedly reluctant stepfather, hint at less than domestic bliss. Dinner by Lamplight (1899) could be a scene from a Hitchcock film. We view the family meal over Vallotton’s silhouetted shoulder, looking down at the frightened face of his young stepdaughter. He is portraying himself here as a menacing stranger, an intruder in her world.

Painted in the same year, Le Ballon (The Ball) depicts another little girl in a situation that approaches peril. Viewed from a high vantage point – a perspective inspired by a photo Vallotton took from a window – the child runs after a red ball as it rolls towards thick vegetation. Behind her, the shadows of unseen trees seem to reach after her, as she chases her toy.

Women are the victims in many of Vallotton’s works, falling foul of murders, accidents and infidelity, but his relationship to the opposite sex is undoubtedly a complicated one. In the ironically titled Chaste Suzanne (1922), Vallotton flips the biblical tale of Susanna and the Elders, so that it is not the young woman who falls foul of two lecherous old men, but, instead, the balding gentlemen who are held enthralled by a femme fatale. 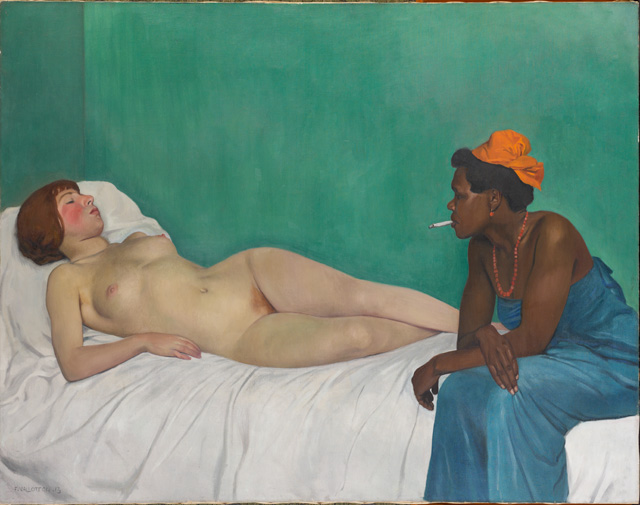 What Vallotton really thought of the world he inhabited as a painter for the wealthy – a position made possible by his marriage – is unclear, but, in La Blanche et La Noire (1913), we see again his acerbic take on society’s conventions, in what might be the most impressive painting he made. Set against a bright teal wall, a white woman languishes nude on crisp sheets, as a black woman, dressed in blue and orange, watches her, a cigarette gripped between her lips. This is Vallotton’s reply to Édouard Manet’s Olympia (1863), which scandalised the viewing public with its taut-bodied prostitute attended by a black maid presenting a bunch of flowers.

Vallotton’s version is less shocking. The reclining women adheres to the idealised image of the white female nude – sensual, unengaged and idealised –while the black woman is portrayed as a real person, self-assured, and someone who does not have the luxury of lying around in the middle of the day. This is an image of contrasts and we are left to guess at the relationship between the two women. 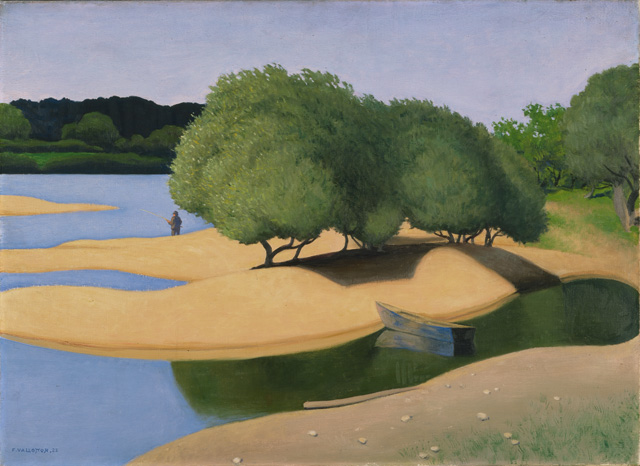 This exhibition finishes with Vallotton’s landscapes, a welcome relief from his claustrophobic interiors, with the exception of La Mare (The Pond) (1909), which has the feeling of some approaching menace. The black water of the pond is edged with algae, which forms an unnatural outline, as though something has fallen in, a possibility reinforced by small ripples that radiate from an unknown source. This is an example of his paysages composés (composed landscapes), which were sketched on site and then painted, partly from memory, in a studio.

Last Rays (1911) is a similarly strange painting, but one devoid of the same sense of threat. Five coral-red pines, their trunks coloured by the setting sun, reach up into the empty sky. Here, Vallotton captures the strange atmosphere of the twilight hour, while leaving us to imagine the landscape that lies beyond.
Who was the true Vallotton, and what did he really feel about the society he lived in? He was certainly patriotic about his adopted France and was frustrated that, at 49, he was too old to enlist when war broke out in 1914. And for all his criticisms of bourgeois life, he married a wealthy and well-connected woman. The curators refer to him as a “singular” artist. He certainly was unusual. His style varies hugely from the clumsy and even cartoonish, from slimy-looking grey-tinged nudes and shadowy scenes to paintings of elegance and even beauty. It is difficult to get a handle on the man, and his work divides opinion, but this exhibition valiantly attempts to impose some order on his confusing, but fascinating oeuvre. 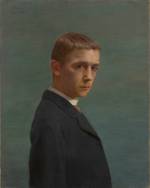