This show, while not shedding new light on Francis Bacon himself, does paint a picture of a very restrictive period for gay men and thus highlights the artist’s bravery in producing such provocative work

This was supposed to be a small but fascinating celebration of the 60th anniversary of Francis Bacon’s first exhibition at the ICA. Instead, the business of curating the show became for Gregor Muir, the ICA director, a mystery of the disappearing archive. “I had hoped to show installation shots, I had hoped to show photos of Bacon at the ICA, and I had hoped to present a room in which I could show what the exhibition looked like,” he explains, “but that was, in the end, impossible.”

For whatever reason, there is scarcely any documentation of the 1955 exhibition. Muir scoured the ICA archives from the time, now held at Tate, but all he could find was a test print of an invitation card (through sheer luck, he later chanced on an actual card in a nearby bookshop); the press release; a list of works; and one photograph of an ICA employee standing in front of one of the works, hanging in the then Dover Street Market premises.

So why persist in making a show out of, well, virtually nothing? It is not as if Bacon (1909-1992) was not already fairly well-known by 1955, not least following his participation, alongside Ben Nicholson and Lucian Freud, in the British Pavilion at the Venice Biennale the preceding year. It was this, it seems, that triggered the ICA show: minutes from a meeting in 1954 note the news arriving that Tate was going to take the Bacon show from Venice and that there was, therefore, an opportunity for the ICA to do the retrospective-cum-first-solo-institutional-show. One of the ICA founders, Peter Watson, had long been a Bacon supporter so it was natural for him to be appointed curator. That Watson was gay might explain something of the show’s extraordinary nature.

Reviews in 1955 note a sense of Bacon’s work being provocative, but never delve into the subject matter of this provocation. The content is not talked about at all. The Architectural Review of April 1955, for example, focused instead on the “decorative value” of the paintings, which were deemed “effective as interior decoration”, “functional as space equivocators” and “useful wall objects”. Attention was also paid in the same review to the plate-glass against the black background, which drew the viewers in, capturing their reflections, lending “a rare, almost aristocratic poise by comparison with the uneasiness of the painted apparition”.

What Muir’s show does paint is a picture through a clouded glass of an almost unimaginably restrictive period. For gay men in the years before the Sexual Offences Act 1967 decriminalised homosexual acts between consenting adults, life was a constant nightmare. Bacon seemed not to give a damn and, like a lot of the more outrageous gay men in the art world, he got away with it. Others didn’t. In 1954, Alan Turing killed himself, following his prosecution in 1952 for homosexual acts, when he accepted chemical castration in lieu of a prison sentence. Also in 1954, journalist Peter Wildeblood, along with Lord Montagu and Michael Pitt-Rivers, was charged with “conspiracy to incite certain male persons to commit serious offences with male persons”. The trial gained significant press attention, resulting in Pitt-Rivers and Wildeblood being sentenced to 18 months in jail. These – and further related news stories, including the setting up of the Wolfenden committee to establish whether or not homosexuality ought to be a crime – are documented in the vitrines of the reading room, underneath timelines detailing these events, events relating to the ICA and events in Bacon’s own life.

The original list of works cites 13 paintings, largely from 1950-55, and a series sometimes referred to as Man in Blue. These were based on businessmen Bacon met while staying at the Imperial Hotel in Henley-on-Thames – and they were suitors as much as suited. Handwritten at the bottom of the list of works is an extra entry – number 14, Study of Two Figures. Alongside this is a letter from Watson to Bacon requesting the loan of what he here terms “your wrestlers”. Muir’s conclusion is that this refers to Two Figures in the Grass (1954): “They’re making out in quite an ambitious manner and I think, for many, that painting would have had quite clear homosexual connotations – as it has for many now. There is a certain ambiguity in Bacon’s work, but these two figures – which take their cue from [Eadweard] Muybridge’s The Human Figure in Motion (1901) – really fall within a homoerotic language.” That is, the Men in Blue alone would not necessarily engender a homoerotic reading, but, when placed alongside Two Figures in the Grass, the covert becomes overt – they are undeniably queer. And this is no small thing.

On the opposite wall, there is a collection of “transvestite” photographs by Soho insider John Deakin, including a couple of “unknowns”, which are now deemed to be of Bacon in drag. One was included online last year alongside a review of the Deakin show at The Photographers’ Gallery and someone wrote in the comments field that it looked like Bacon. The Deakin Estate followed this up by getting the CIA to run facial recognition tests and, indeed, it seems to be a match. Although these photos remained hidden under Deakin’s bed until his death, allowing himself to be photographed in such a manner was a risky action for Bacon, as the images could well have been used against him, had he, like so many others, been hauled up on account of his sexuality.

The final vitrine shows connections Muir managed to establish between certain Bacon paintings and other ICA individuals, including Richard Hamilton, whose exhibition catalogue for the show that followed Bacon’s had the Jacques-Henri Lartigue photograph, The Grand Prix of the ACF, 26 June 1912, as its cover. Placed alongside a copy of Bacon’s Crucifixion (1965), it is fairly clear that the two figures in the photograph served as inspiration for those on the right-hand panel of the painting.

So this is a show about a show of which scarcely any documentation exists – a mysterious black hole in the ICA archive – perhaps not the most obvious starting point for an exhibition. What is presented instead is the timeline, the findings along the way, the meanderings of Muir, and a portrait of the period, as it would have been for a gay man in London in the early 50s. It is revealing, contextualising and fascinating. It does not shed any new light on Bacon himself, but it certainly highlights the bravery of his paintings and their sometimes fairly direct content, depicting aspects of his openly gay life, at a time when such a lifestyle was an imprisonable offence. 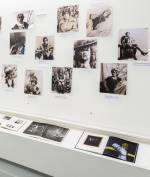