“Photography is a universal language, a direct means of communication without need of translation,”1 says Cornell Capa explaining the entry into photojournalism of his brother Robert after being sent into exile in Berlin in 1931, scarcely able to speak any German. Perhaps this is why the development of 20th century photography can be largely attributed to five Hungarian Jews, all of whom were forced to leave their native country to live and work abroad. Their stories – as well as that of the burgeoning genre (or genres) of photography – are presented in the Royal Academy’s exhibition, Eyewitness, which brings together some 200 photographs from between 1918–1989, taken by over 40 Hungarian photographers, but focusing on the works of the five most seminal: Brassaï (1899–1984), Robert Capa (1913–1954), André Kertész (1894–1985), László Moholy-Nagy (1895–1946), and Martin Munkácsi (1896–1963).

The exhibition opens at home in Hungary with a display of works from the Pictorialist movement, or “Magyar Style”, with protagonists such as Rudolf Balogh (1879–1944) and Károly Escher (1890–1966) using soft focus and special printing techniques – some sepia, some black and white – in an attempt to “communicate [the] national character”2 of their pastoral idyll. Processions, animals, farm workers, open landscapes, high viewpoints, and the use of light and shadow – aspirations after the form and status of fine art.

The arrival of the handheld camera in the late 1920s, however, vastly increased the possibilities of the medium, particularly for photographers like Robert Capa, operating almost clandestinely as they commuted between wars. After his early work in Berlin in the 1930s, it was precisely as a war photographer that Capa really made his name. His image Death of a Loyalist Militia Man (1936), taken in Spain after the outbreak of Civil War, is probably one of the most recognisable photographs ever taken, certainly in this exhibition. Recalling Francisco de Goya’s The Third of May 1808 (1814), with his white shirt, it captures the soldier at the very instant of being shot (though the controversy continues about whether or not the picture was set up). A lesser-known but equally powerful image is Refugees in Front of the Sha’ar Ha’Aliya Refugee Camp, Haifa (1950), depicting a small girl in headscarf and bare feet, face crumpled as she wails inconsolably. Shortly after Capa’s death in 1954, John Steinbeck wrote of him that “he could show the horror of a whole people in the face of a child,”3 and it is easy to see what he meant.

But it is not all doom and gloom. The exhibition also includes a good selection of Brassaï’s images of the Parisian underworld, as well as of contemporary artists (Matisse, Picasso, Chagall), and a print from Munkácsi’s celebrated shoot of Leni Riefenstahl (1931), commissioned by the Berliner Illustrirte Zeitung. Munkácsi, who was better known for his sports photography, and for his shot of Four Boys at Lake Tanganiyka (1931), which led Henri Cartier-Bresson to the realisation that “photography can fix eternity in a moment,”4 later went on to become the “first” fashion photographer, with his first session commissioned by Harpers Bazaar, paving the way for the likes of Herb Ritts.

There are more experimental images from Moholy-Nagy, a leading Bauhaus figure and teacher of painting, as well as author of a seminal book on aesthetic theory. Most striking is Photogram (1925), taken without a camera, by placing objects directly over light-sensitive paper and producing something akin to a Rorschach image. Alongside this hang a couple of spectacular architectural photographs by Angelo (1894-1974), themselves resembling geometric compositions of shadow and shape.

Kertész shows an equally innovative streak with his distortions (conjuring figures from a hall of mirrors), and his dramatic crop of Elizabeth and I (1931), which, originally a full-length photograph of him and his wife, now zooms in on just half of her face, and shoulder with his hand on it. For me, however, the highlights of the show are Kertész’s later works – Lost Cloud (1937), Melancholic Tulip (1939) and Homing Ship (1944) – taken shortly after his arrival in New York, and perfectly capturing the sense of alienation he felt: “What I felt when making this picture was a feeling of solitude – the cloud didn’t know which way to go.”5

The exhibition closes as it began, back in Hungary, with photographs from the Soviet era, which followed the Second World War. Socialist Realism was the only form of photography permitted at that time, and images tend to depict industrial life and Communist ideals. Nevertheless, there are even now examples of ground-breaking, risk-taking men, including Tamás Urbán (born 1945), whose series of reports on young drug addicts manages to bring to light the darker side of life behind the Iron Curtain.

The two final images in the exhibition – Imre Benkö’s Lenin Statue Lying Down (1992) and Sylvia Plachy’s Fallen Worker (1993) – depict the fall of Communism and the end of an era for Hungary, not only politically, but also as the forerunner of developments in the photographic world.

As Kertész himself once said: “Everybody can look, but they don’t necessarily see.”6 It takes such visionary photographers as those whose works are exemplified in this exhibition to open our eyes and allow us to bear witness. 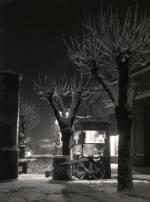 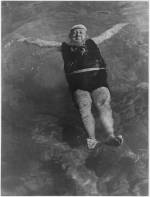 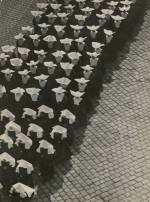 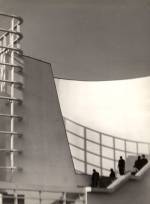