Extreme Embroidery: Art and Craft Meet On the Verge

Extreme Embroidery: Art and Craft Meet On the Verge

In 2007, the Museum of Arts & Design in New York City embarked on a series of exhibits examining ways in which contemporary artists are reinventing the age-old techniques and styles of traditional handcrafts. The first show in the series, Radical Lace & Subversive Knitting, opened in January 2007.1 Pricked: Extreme Embroidery, the second installment, proves to be even more provocative, with a range of artists and works that challenge long-held views of embroidery as a socially acceptable, benign form of practical and decorative art. While it is true that embroidery figures prominently in the 60 works displayed, visitors will note many other surprising materials used by the 48 exhibiting artists: human hair, Welsh slate, brass badges, laundry bags and an antique doll bed among them.

Representing 17 countries from America to Transylvania, Korea to England, and Egypt to Wales, the artists were chosen by the show's organizer, MAD's chief curator David Revere McFadden. The values of traditional handcrafts (material beauty, practicality) are, in many ways, a refreshing antidote to the lofty ideals of conceptual art. Yet these artists are not craftspeople, and their art is very much conceptual and experimental.

When they have viewed the entire exhibit, visitors will have considered such diverse topics as  viruses that invade human bodies (in Laura Splan's computer machine-embroidered doilies), tattoo culture (in Benji Whalen's hand-embroidered, stuffed arms), mythologies of childhood (in Morwenna Catt's phrenologies and Andrea Dezsö's "Lessons from My Mother” series), the cult of celebrity (in Michael Brennand-Wood's "Flower-Head–Narcissistic Butterfly" and Maria E. Piñeres's "mug shots”) and the brutality of dictatorship (in Christa Maiwald's "Garden Party,” which juxtaposes embroidered images of some of the most tyrannical dictators with ribboned and appliquéd childen's dresses). The "thread" that ties these artists together is use of a traditional craft to ground conceptual art in materiality, thereby by joining their personal, social, political and spiritual ideas to their love of making art. For them, process has as much meaning as the ideas expressed by the final products.

The exhibit is framed within six themes that draw connections between particular works. "Neither More Nor Less," a phrase taken from Humpty Dumpty in Lewis Carroll's Alice in Wonderland, includes works where words and images interact; "Politics Is Not a Science,” a phrase taken from Count Otto von Bismarck, contains works that make overt political statements; "Whatever Is Well Said By Another Is Mine,” a phrase taken from first-century Roman writer Seneca, demonstrates the flexible nature of creativity with works that recycle ideas and images from other sources; "Memory Is What Makes Our Lives,” a phrase by Spanish filmmaker Luis Buñuel, highlights the influence of memory in the creative act; and "Bodies Never Lie," a phrase taken from American choreographer Agnes de Mille, features works made by artists for whom the human figure is primary.

The movement to reclaim traditional handcrafts began decades ago, when young students like American fibre artist Elaine Reichek felt a need to move beyond strict definitions of "fine art." Born in New York City, Reichek attended Yale University and Brooklyn College. From 1978, she has been exhibiting her works internationally, with solo shows at such institutions as the Museum of Modern Art in New York and the Palaise des Beaux-Arts in Brussels. A pioneer in the reclamation of traditional fibre-based techniques, Reichek can view the field from a broad perspective. "I actually trained as a painter," she says. "But my generation of artists was interested in expanding the parameters of art. Sewing and knitting were not even remotely part of art discourse when I started using them, and I thought that by giving me a structure outside any received notions of what an artwork could be, they would give me a way to bring new ideas into my art."2

Reichek uses digital technology to blend image with text. Her "First Morse Message" (2003), a machine-embroidered curtain-like work, weaves its way through the top level of the exhibit, broadcasting its coded message. The four panels of this work (4.88 x 6.10 m) bear a continuous band of Morse-code dashes along the middle from one end to the other. When decoded, the words reproduce the first telegraphic message sent (from Washington, DC, to Baltimore, MD, in 1844) by inventor Samuel F. B. Morse.

Reichek's "A Lexicon of Clouds" appears later in the show. This work explores the symbolic language of art by focusing on details that many consider to be minor: clouds. The artist embroidered clouds from paintings by famous painters (El Greco and J.M.W. Turner, for example), bridging the gap between painting and embroidery, creating a dialogue between the two mediums, and showing how fibre can reveal depth that might otherwise be missed.

There is something very heartening about a show that not only connects traditional handcrafts with innovation in the arts, but links genders and generations. Japanese artist Shizuko Kimura was born in 1936 and received a degree in textiles from the Royal College of Art in London. Working directly from live models, Kimura creates intricately rendered, realistic drawings. "Models in New York" (2006) reveals the artist’s astonishing skill at "drawing" fluid and energetic lines with needle and thread.

Born in 1977, more than forty years after Kimura, Sabrina Gschwandtner  is now a leader in the "extreme craft" movement. The multimedia artist works in film, video, photography, performance, sewing, crochet and knitting. 3 A participant in Radical Lace & Subversive Knitting, Gschwandtner is represented in Pricked with "A History of String" (2007), a series of embroidered texts that examines the messages conveyed by string, thread and yarn. The work includes a zoetrope recording of Louis Lumière's 1894 invention of the modern movie camera and projector. 4

A respectable proportion of artists in Pricked are men, a fact that redresses assumptions about hand- and fibre crafts as women's work. One might expect most to be quite young and, thus, further removed from such labels. But as with many assumptions, a closer look reveals that some of the male artists have been working with fibre for years. Welsh artist Clyde Olliver, for example, produces beautiful embroidered sculptural works in slate. Born in 1949, Olliver began working with thread as a child and served as a studio assistant to a tapestry maker. He has a degree in textiles from Goldsmiths, University of London. The thirteen slate sculptures that make up his "Welsh Quilt" (2006) marry a delicate, ephemeral material (linen thread) with one that endures through the ages (slate). This strangely delicate tableau can be enjoyed for its surface beauty, but when visitors read the wall text they will find a much deeper meaning. Traditionally, Welsh quilters used plates, cups and saucers to draw patterns for cutting and stitching. Some of the traditional patterns (wineglass, teacup, etc.) appear on the slates in Olliver’s work.

Strong on thought-provoking content, the exhibit does have some light-hearted moments. Stephen Beal's "Vincent Tries on Rembrandt's Hats. Plus Some Other Horsing Around" (2007) will, no doubt, bring a smile to art lovers' faces. In this hand-embroidered cotton canvas, Beal reproduced Impressionist painter Vincent Van Gogh's self-portraits. In the nine panels, Van Gogh wears a different hat, each taken from one of Rembrandt's self-portraits. A published writer and poet, Beal is the author of The Very Stuff (1995), a volume of poetry that considers with words how shades of embroidery floss reflect memories. His "Periodic Table of the Artist's Colors" (2004), also on view in Pricked, explores the nexus of color and memory visually.

Children’s-book author/illustrator Maira Kalman, who contributed illustrations to a recent edition of the classic writing text by Strunk and White, The Element’s of Style (Penguin, 2005), lends her charming whimsy to the show with “Four Panel Piece: I feel a sense of dread; My rigid heart; What I possess; What had disappeared” (2005). The embroidered images, accompanied by lines spoken by Goethe’s Faust, beg viewers to develop their own explanations for what they see. 5

The exhibition catalogue is a full-color, paperback record of the show, divided into the categories noted above, with an introduction by McFadden and a section of brief artist biographies. The format (a two-page spread devoted to each work) conveys the diverse approaches and concerns of the artists, and the labor involved not only in finding them, but joining them into a cohesive show. The curatorial intelligence required for doing so matches the fine-art stitchery in the display. Those who view the catalogue only, though, will not see how each work performs within its imposed section and within the exhibited works as a whole. It is only on site that one senses the full impact of a wide movement to reclaim a traditional handcraft because, up close, the love of “making” cannot be missed.

The haunting work reproduced on the catalogue cover, Angelo Filomeno's "Death of Blinded Philosopher" (2006), is a potent reminder of art’s power to reveal and redeem hopes, dreams and fears. Born in 1963, Filomeno grew up on a farm in southern Italy. Taught to sew by his mother, Filomeno honed his skill as a tailor's apprentice. The scale of this work (106.7 cm x 3.09 m) mirrors the engulfing aspect of death, while the image Filomeno embroidered on silk shantung with linen and crystals evokes the murky territory between conscious and unconscious aspects of the self. Some viewers may shy away from the blatant imagery of a skeleton whose eye socket is being violated by a red scaly claw. The socket ejects a blood-colored explosion that, seen from afar, is a beautifully balanced decorative motif. Up close, viewers will see in the vein-like leaves and flowers, studded with red crystals, cockroaches and flies, the creatures that feed upon death.

As with Radical Lace, MAD’s staff has designed a series of events to stimulate the "making of things" in those of us for whom appreciation ranks as the greatest talent. Among the scheduled events are discussions of the symbolic nature of embroidery in the Palestinian's struggle to remain united by a distinct cultural heritage and identity; the role that embroidery kits and samplers have played in the social history of women for centuries; the ways in which traditional techniques and materials are being used to make political statements about gender and ethnicity; and the relationship between language and embroidery, notably in the one-of-a-kind books made by exhibiting artists Tamar Stone and Andrea Dezsö. At the close of the exhibit in March, MAD  and the Church of Craft will host a do-it-yourself salon. 6 Traditionally, such handcrafts as embroidery were considered social as well as practical and beautiful (so participants in the DIY Salon can expect disc jockeys and drinks, as well!)

Pricked will likely draw a crowd as diverse as the art that makes up the exhibit. Those who work with thread will find their way to the show, of course, but the more traditional of them may leave somewhat baffled. There are no examples of anything that can clearly be labelled "embroidery." The strongest statement made by Pricked is that art is many, perhaps all, things. Embroidery is just one handcraft that is playing a part in some of the most intriguing and meaningful art being made today.

1 See Studio International article: "Contemporary Artists Embrace a Radical Tradition" (Radical Lace & Subversive Knitting, Museum of Arts & Design, 25 January -17 June 2007).
2 From "In the Studio: Artist Elaine Reichek," Arts & Design Views (Museum of Arts & Design, fall 2007).
3 Gschwandter founded KnitKnit magazine (www.knitknit.net) and is the author of KnitKnit: Profiles + Projects from Knitting's New Wave (STC Craft, 2007).
4 Lumière's invention was driven by a mechanism adapted from sewing machines by which the cloth is advanced. Early in film history, women found work as film editors, perhaps because they had experience with the mechanism.
5 Kalman’s latest book, The Principles of Uncertainty, was released in the US in fall 2007 by Penguin.
6 The Church of Craft has chapters in Manchester, England; Montreal and Toronto, Canada; Athens, Greece; and these U.S. cities: New York, Seattle, Austin, San Francisco, Los Angeles, Portland, Phoenix and Kansas City. For more information, go to www.churchofcraft.org. 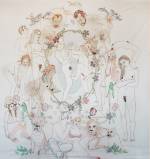 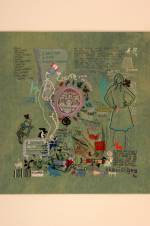 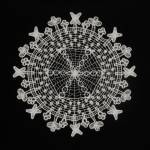