Every Day is a Good Day. The Visual Art of John Cage

Every Day is a Good Day. The Visual Art of John Cage

In 1952 David Tudor performed a piece by John Cage that existed in the absence of musical notation. The piece was entitled 4’33”. Tudor’s performance of this piece involved his sitting at the piano, opening the lid, turning the pages of the score at intervals, and closing the lid. Not a note on the piano was played but that is not to say that no sound occurred within the specified duration. Sound was present: the sound of a restless audience, the occasional cough, the rustling of a programme, and of the distant sounds from the environment beyond the concert hall. This type of sound, although considered by some as noise, as that which belongs to the realm outside the musical one, became the material of the piece 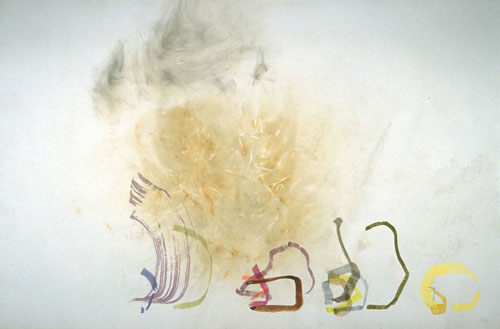 Although 4’33” has been described as a silent piece and sometimes aligned to the work of earlier artists, writers and satirists who played with the seemingly paradoxical idea of an art work containing absence, such as Ervin Schulhoff’s score In Futurum from Fünf Pittresken (1919) which contains nothing more than different values of rests, or Alphonse Allais’ blank score entitled Funeral March for the Obsequies of a Deaf Man (1897) – presumably an auditory accompaniment to his white painting called First Communion of Anaemic Young Girls in the Snow (1883) – it has little to do with the notion of an absence of sound or a sound which occurs outside earshot. Cage’s attitude to silence was that it didn’t exist, not in any absolute sense. If it occurred it did so under the guise of flanking sounds. Like the main protagonist of Heinrich Böll’s short story Murke’s Collected Silences (1955, 1963) whose employment at a radio station allows him to feed his passion for collecting splices of tape containing the silent off-cuts of programmes, a pause, an intake of breath or a sigh, Cage is motivated by the idea that silence is just the presence, however inconspicuous, of sound, which he regards as “unintentional”. For him, a pause is just an intake of breath to be attended to in the same manner as other vocalisations.

Cage’s liking for unintentional effects is also reflected in his visual work that is exhibited at the Hayward Gallery Project Space. What is apparent in all the pieces presented is not only the seeming randomness of the marks, the impressions and stains and the burnt edges of the paper, it is the use of these so-called “mishaps” as the focus of the pieces. In Eninka (1986) one could suppose that the ring-stains in the work are the result of an absent-minded placing of a cup, whereas the rings are the result of a hot iron kettle being pressed on the paper. The different density of tone, and the thickness of the circle are features that Cage used and were generated by variations of pressure and degrees of heat of the kettle. Smoke is also a feature of the work: the plates are etched using smoke as an acid resist, and the patterns produced combined with the gentle colouration of aquatint make the work appear atmospheric, an appearance that Cage uses again and again, and one that is reminiscent of William Turner’s later Venetian paintings, where his preoccupation with clouds and fog and mist, and the intersection between a cloudy sky and a misty landscape led him to create paintings of the most subtle uses of tone.

One can draw parallels between the use of smoke in the process of etching plates and of solarisation in the photographic negative. In both cases the effects of the images are constrained but not wholly controlled by the chemical distribution, and in the case of the photograph, by the strength and duration of light exposing the negative. Constraint is the operative word, since Cage’s process of working often involved using the I Ching to determine artistic parameters. In the series Changes and Disappearances (1979–82) the images arise from the chance-operated arrangement of small plates and of their further placements. In the lithograph series, homage to Marcel Duchamp, Not wanting to Say Anything About Marcel (1969), Cage uses chance operations to find words in a dictionary, to relate those words to images and to determine the position of word and image on the page. The result is that these pieces are rich in imagery, in words and sentences, half obscured or camouflaged in what looks like undergrowth at dusk.

If chance operations are supposed to distance the artist from his work, to render the work impersonal, the process by which the image emerges does the opposite, it binds the artist to his work. Too many constraints by virtue of chance operations makes a piece formulaic. Cage was never interested in the idea of producing a dry mechanical work, rather he strives for the subtleties of texture and form. Mushroom Book (1972) is an image built out of over-layered hand-written texts complete with mistakes and crossings-out. The series HV (1983) consists of horizontal lines, each conveying a different texture in accordance with the material used to roll the ink on the press.

Of the pieces that include an impression of different objects, there is a sense in which these images are in sympathy with Cage’s ideas on silence. Something is evident: a kettle of a certain temperature has been pressed with a certain force onto the paper of a certain thickness. A brown ring is left. And with silence, the unexpected sound from the hum of the traffic or any other contingent aural debris makes its own impression, however oblique, upon the duration supposedly containing no musical sound.