Hankins, senior curator at the Hirshhorn museum, explains how a collaboration with Mark Bradford led to the artist’s monumental cyclorama Pickett’s Charge, and why the subject, the 1883 Battle of Gettysburg, still resonates today in the US 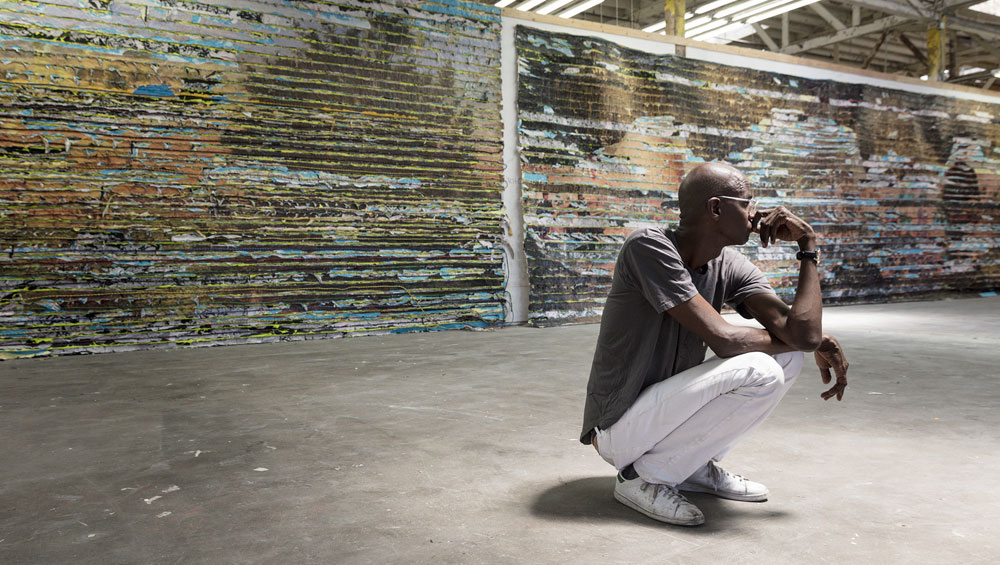 Towards the end of last year, the Hirshhorn Museum and Sculpture Garden debuted one of Mark Bradford’s largest works so far in his career, Pickett’s Charge. The work, which is on show until November 2018, is Bradford’s first solo exhibition in Washington, DC, and his first major US solo show since his presentation last year as the US representative for the 57th Venice Biennale.

The monumental work is a cyclorama, made from eight canvases, each 12 feet (3.6 metres) high and more than 45 feet (13.7 metres) long, that together encircle the Third Level inner-circle galleries. Bradford (b1961, Los Angeles) spent two years developing the project in his LA studio, a 50,000 square foot former metal-manufacturing facility. The artwork is based on Paul Philippoteaux’s 1883 panoramic painting The Battle of Gettysburg, a 360-degree panoramic image, currently on view in Gettysburg National Military Park, which depicts Pickett’s Charge, the final charge of the Battle of Gettysburg. The battle, led by the Confederate Army, is considered by historians to be a turning point of the American civil war. 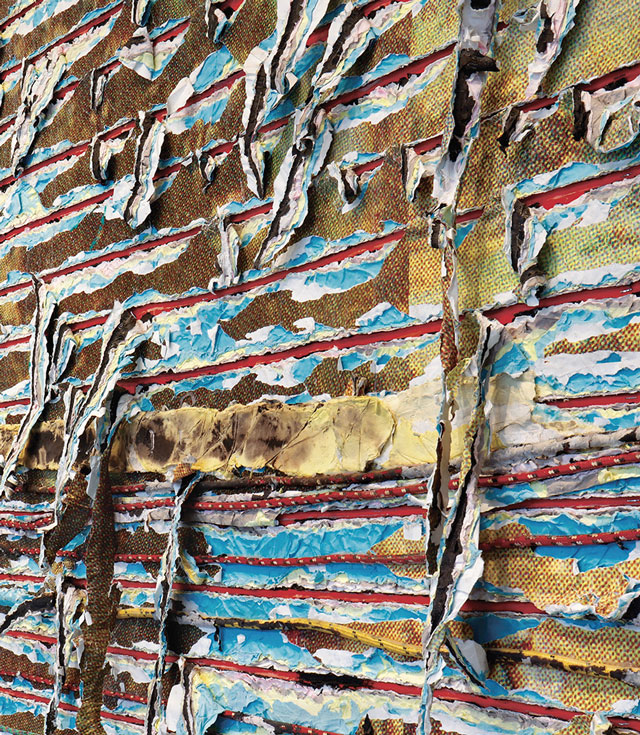 Bradford has transformed Philippoteaux’s work, scraping and gouging through layers of paper, rope and cord, forming a series of abstract paintings with scenes of The Battle of Gettysburg lurking beneath. His reinterpretation of the original artwork incites viewers to rethink national, historical narratives, and comes at a crucial time in light of the movements to remove Confederate monuments across the South. Bradford conceived of the work in 2015, before the conflicts began, but his work nonetheless takes an important stance in the sociopolitical discourse on America’s history. “Politically and socially, we are at the edge of another precipice. I’m standing in the middle of a question about where we are as a nation,” Bradford said in a statement.

I got in touch with Hirshhorn senior curator Evelyn Hankins via email to find out more.

Cassie Davies: Perhaps we could begin with the early stages of commissioning. I know that the Hirshhorn is committed to artists who take part in, and challenge, social and political discourses. How did you begin working with Mark Bradford?

Evelyn Hankins: Mark’s project is part of an initiative under [Hirshhorn Museum director] Melissa Chiu to rethink the inner-circle galleries, which traditionally displayed small-scale sculpture from the collection, as a space for site-specific commissions. During a curatorial retreat, we realised that some of the most successful recent exhibitions had taken advantage of the Hirshhorn’s unique architecture. After discussing Mark as an artist with whom we wanted to work, we visited him at his studio in Los Angeles and then invited him for a site visit. He was quite taken by both the building and the unique platform offered by the museum’s location on the National Mall.

CD: What was it like seeing Bradford’s creation of Pickett’s Charge? Can you tell me about the stages of development?

EH: Working with artists on new projects is one of the most exciting aspects of my job. Mark had a couple of ideas that he thought would resonate with both the building and the site, but he ultimately decided to pursue the idea of Pickett’s Charge after we discussed resonances between our building and cycloramas. The cyclorama at Gettysburg National Park is one of two extant examples in the US and it appealed to Mark both for its proximity to Washington DC and the way its subject matter remains relevant today. From there, Mark started conducting research and thinking about how he might incorporate imagery from Philippoteaux’s painting into his project. As he created the canvases, I visited the studio to see the work’s development, and our exhibits staff worked with his team to figure out the logistics of installing the canvases. The critical moment was when the eight canvases were finally on the curved walls, something that we could only imagine until the installation was finished. As Mark has said, the building completed his artwork. 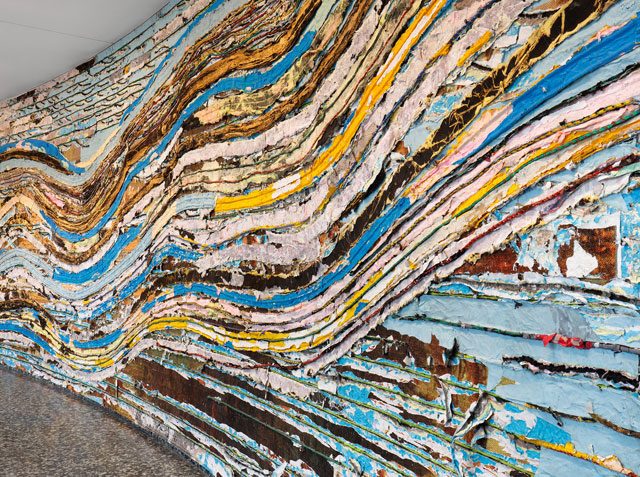 CD: The title of the artwork is named after a Southern general, referencing the 1863 Battle of Gettysburg. Bradford has also embedded, in the layers of this artwork, a reproduction of Paul Philippoteaux’s 1883 panoramic painting The Battle of Gettysburg. Could you tell me why this battle has been so influential for Bradford?

EH: Mark’s project was inspired by Philippoteaux’s painting and the ways that a seemingly distant battle remains relevant today; however, this artwork is also exceptionally significant in that it asks much broader questions about the way historical narratives are written, changed and contested over time. In their heyday in the 19th century, cycloramas were understood as providing an exceptionally vivid and lifelike representation of their subjects, which is why they were so often used to portray historical subjects. Mark’s project directly challenges this idea of a single or objective transcription of history, instead suggesting a multiplicity of voices and perspectives. 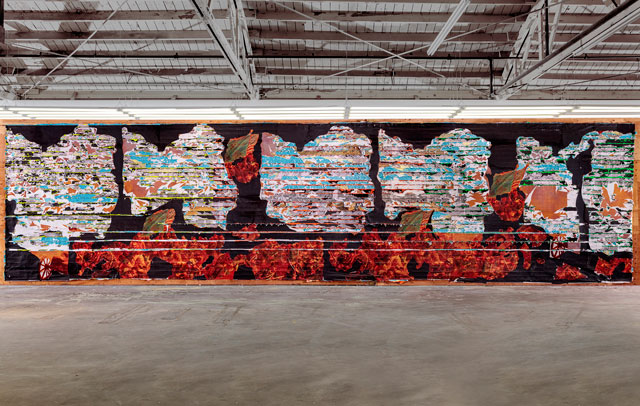 CD: There has been so much conflict about race and racism during the time that Bradford was working on Pickett’s Charge. It has turned violent, too – I’m thinking of the Charlottesville protests in August last year. Was Bradford also responding to this in his work?

EH: This show, like most museum exhibitions, was in development for several years before it opened last November. Rather than responding to specific events, Mark’s installation points to how a seemingly distant battle has continued to resonate for more than 130 years, including our current sociopolitical moment. 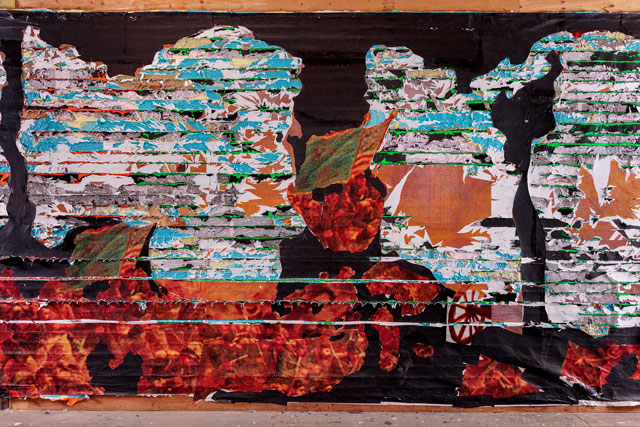 CD: I was compelled by the way the show has been designed to allow the audience to walk around the interior wall. Philippoteaux’s panoramic painting can only be viewed at distance, but Bradford invites the viewer to see his work up close. Was there a reason behind this decision?

EH: The doughnut-shape of the Hirshhorn precludes the possibility of seeing those galleries from a central perspective – you would have to be floating outside above our fountain! The impossibility of an omniscient perspective is critical to Mark’s challenging the idea of a single viewpoint or historical narrative. And the fact that we must view Mark’s project up close reiterates the incredible materiality of the art, which itself disrupts the possibility of a seamless representation akin to that afforded by the cyclorama. 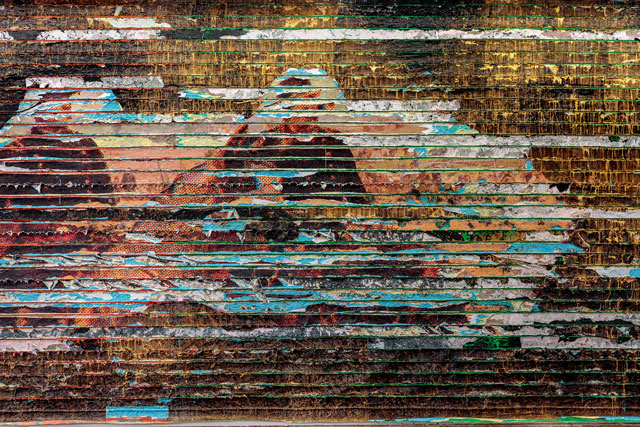 CD: Pickett’s Charge is rich in texture; layers of paper, rope and cord that have been scraped and cut and gouged. It feels quite violent. It also seems to have an important, wider meaning, especially in scraping beneath the surface of national, historical narratives. Perhaps you could tell me more about your thoughts on this point?

EH: You have hit on a critical component of Mark’s work. While the Battle of Gettysburg was an important point of inspiration, it is the way that Mark’s artwork makes manifest – physically and visually – the complex layering of voices and perspectives that has enabled it to offer such a powerful experience for our visitors, and that will ensure its significance in the future.

• Mark Bradford: Pickett’s Charge is at the Hirshhorn Museum, Washington DC until 12 November 2018. 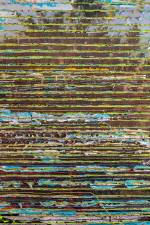