A packed retrospective of the surrealist fellow-traveller spirals off in all sort of directions, offering an argument for the spirit of play 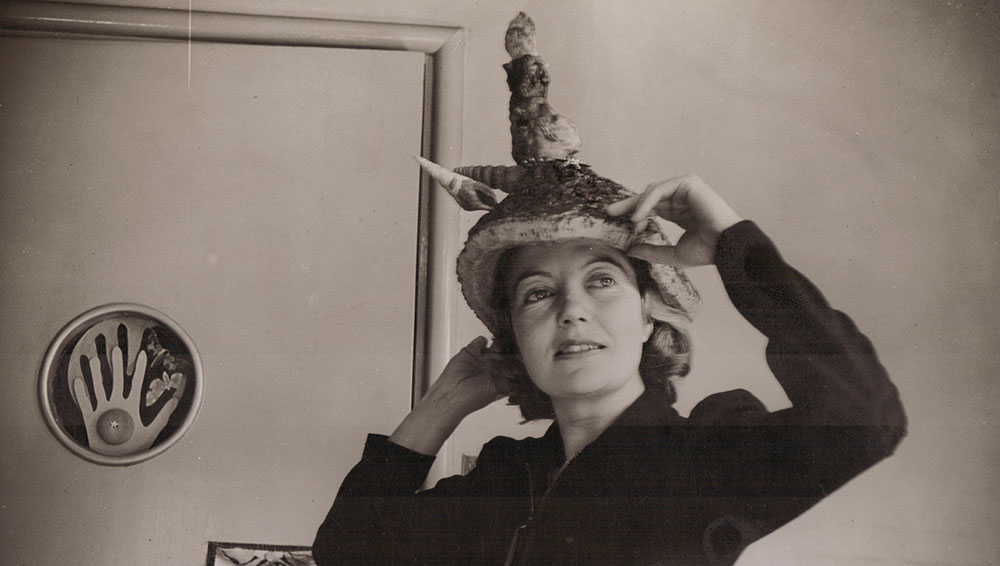 One day in 1936, a troupe of curators paid a visit to the Kensington studio of Eileen Agar (1899- 1991). To the artist’s astonishment, they picked out three oil paintings and five sculptures to be exhibited at the International Surrealist Exhibition at the New Burlington Galleries in London. More than half a century later, in her 1988 autobiography, Agar would write: “The sudden attention took me by surprise. One day I was an artist exploring highly personal combinations of form and content, the next I was calmly informed I was a surrealist!” 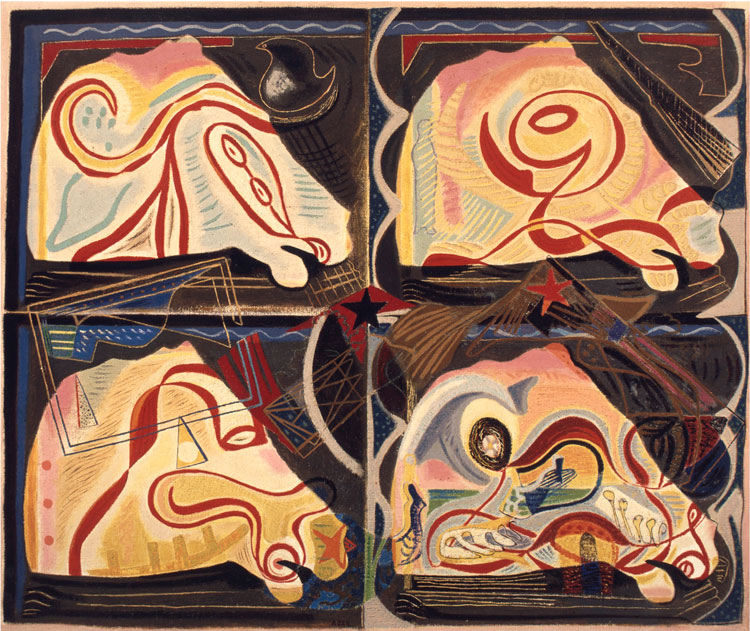 Agar has gone down in art history as a British adjunct to that predominantly continental movement. But Angel of Anarchy, the Whitechapel Gallery’s teeming, compendious retrospective, presents a more ambivalent picture. Which is not to say that, on occasion, Agar didn’t fit the mould to a T. A 1948 British Pathé newsreel shows her promenading the streets of London wearing her Ceremonial Hat for Eating Bouillabaisse (1936): a basket painted to resemble the ocean surface and topped with pieces of a bone, coral, a lobster and a starfish. 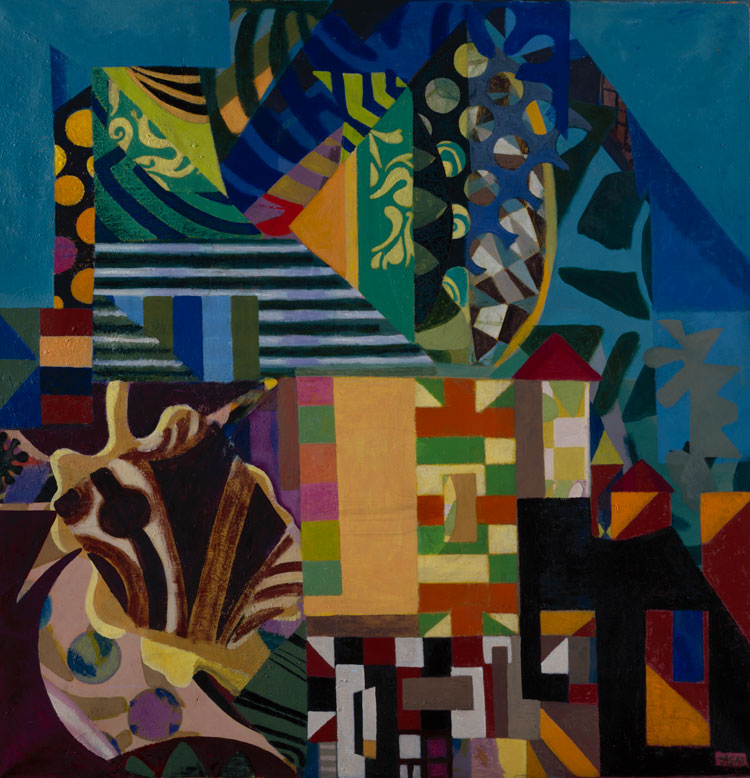 Agar’s relationship to the movement itself was more equivocal. Although always excited by surrealism’s desire to activate the unconscious – one late canvas, Collective Unconscious (1977-78), folds many of her lifelong concerns into a densely layered, semi-abstract arrangement – she drew at least as much on the observable natural world. Stylistically, she often maintained the precepts of cubism, which many surrealists believed themselves to have moved beyond. And she was aghast at surrealism’s patriarchal hierarchy and patronising attitude to female artists. “The men”, she wrote, “are expected to be very free sexually, but when a woman adopted the same attitude the hypocritical upset was tremendous.” She was one of only a handful of women selected for the 1936 exhibition. 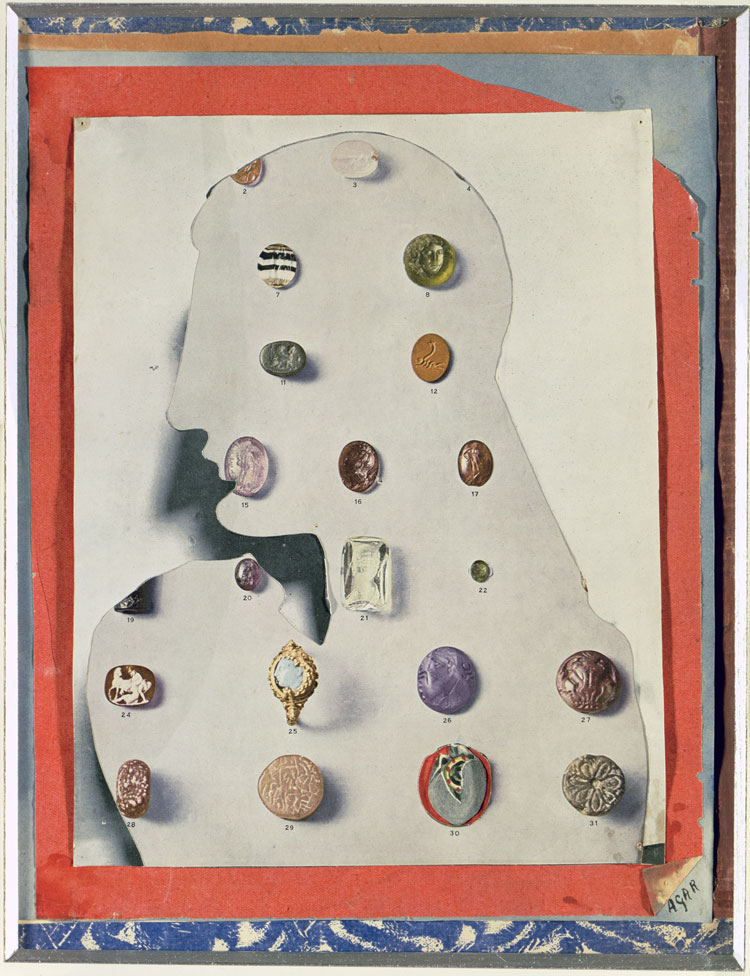 The Whitechapel shows an artist who strove to set her own standards from the off. She was born in Buenos Aires, the child of wealthy industrialists who envisaged her as a society heiress. When she was six, they packed her off to England to attend a succession of boarding schools, accompanied by a cow for fresh milk. At one of these schools she was tutored by the respected horse painter Lucy Kemp-Welch, who implored her “to always have something to do with art”. Agar took this advice to heart. The road was bumpy. Her parents let her take a one-day-a-week course at the Byam Shaw School of Art in Kensington. After an argument about the course’s overly academic teaching, she quietly packed her things and fled to a friend’s house in Cornwall. She was eventually allowed to attend the Slade. Not long afterwards, she married a fellow student, burned all the traditionalist pieces she had been taught to paint, shaved her hair (“to celebrate my new freedom!”) and embarked on her voyage of artistic self-discovery. 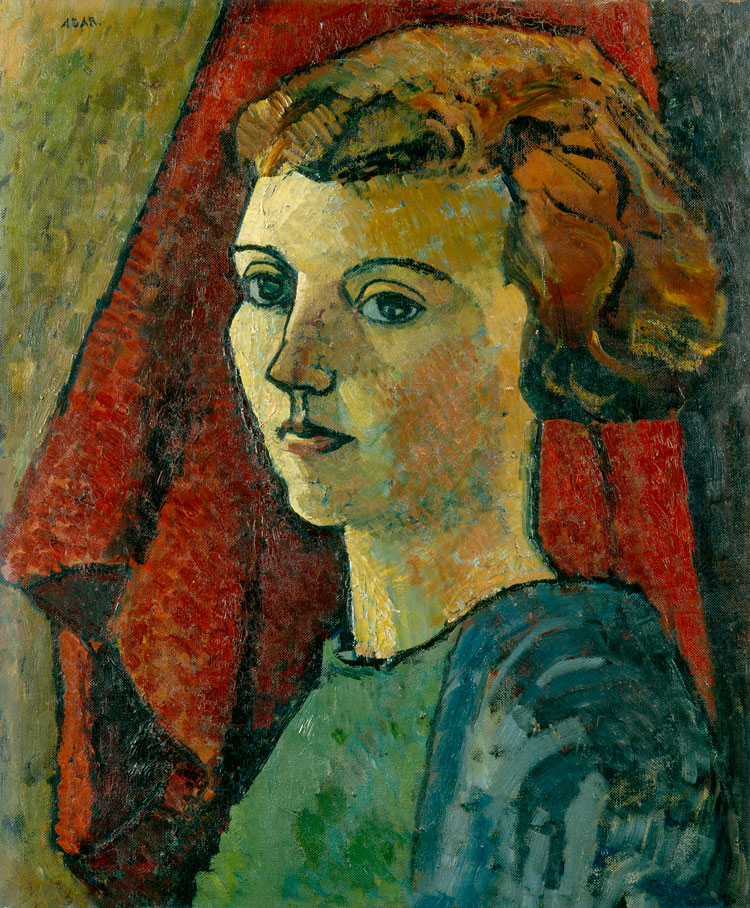 A superb 1927 self-portrait strikes an optimistic tone. Her shin is brushed by sunlight, awakened to a new dawn. Soon, though, she moved away from representations of reality. It might have been the sea that did it. A watercolour from the same year shows her second, long-term, husband, the novelist Joseph Bard, either sitting on or floating beside the waves, off the cost of Brittany. A 1930 mixed media picture has a sea serpent lurk in the waters of Sark. The ocean would retain its grip on Agar’s imagination.

Between 1928 and 1930, Agar lived in Paris, where she learned cubist technique and socialising with the surrealists. The set of oil paintings she made when she moved back to London more clearly bears the hallmarks of both. Works such as Madonna with a Cat’s Cradle (1934) are prismatic and soft, as if aged frescos from an Italian church. The Modern Muse (1934)  is near-genderless, overturning the classical norm of male artist and female muse. 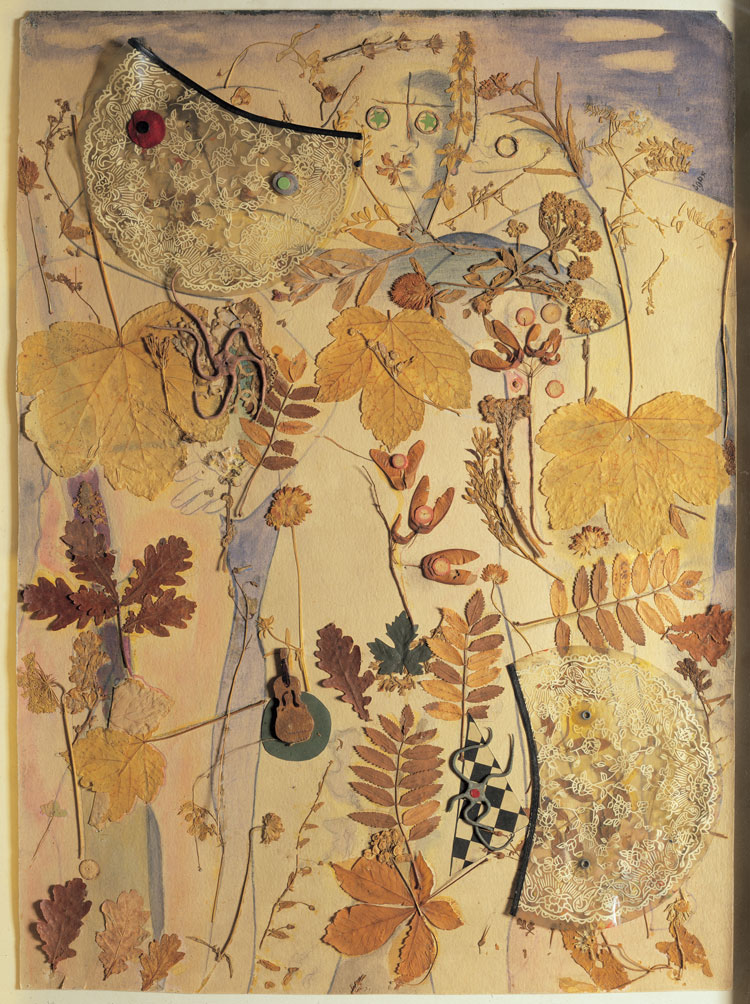 Around the same time, Agar developed a theory of “womb magic”, which held that “the unconscious … establishes the dominance of a feminine order over the classical and more masculine order.” But things quickly become more complex. A pencil and watercolour Self-portrait from 1935 sees Agar with a classical, masculine visage, pressing a muscular arm to her head as if looking out to sea. Another self-portrait, Ladybird (1936), consists of gouache and ink lines and forms drawn atop a nude photograph of the artist behind a translucent sheet, as if the artist has seized back control from her photographer. The painting Muse of Construction (1939), meanwhile, was based on a holiday snap of Pablo Picasso. Agar turned him into one of her muses, while refusing to allow him to paint her. 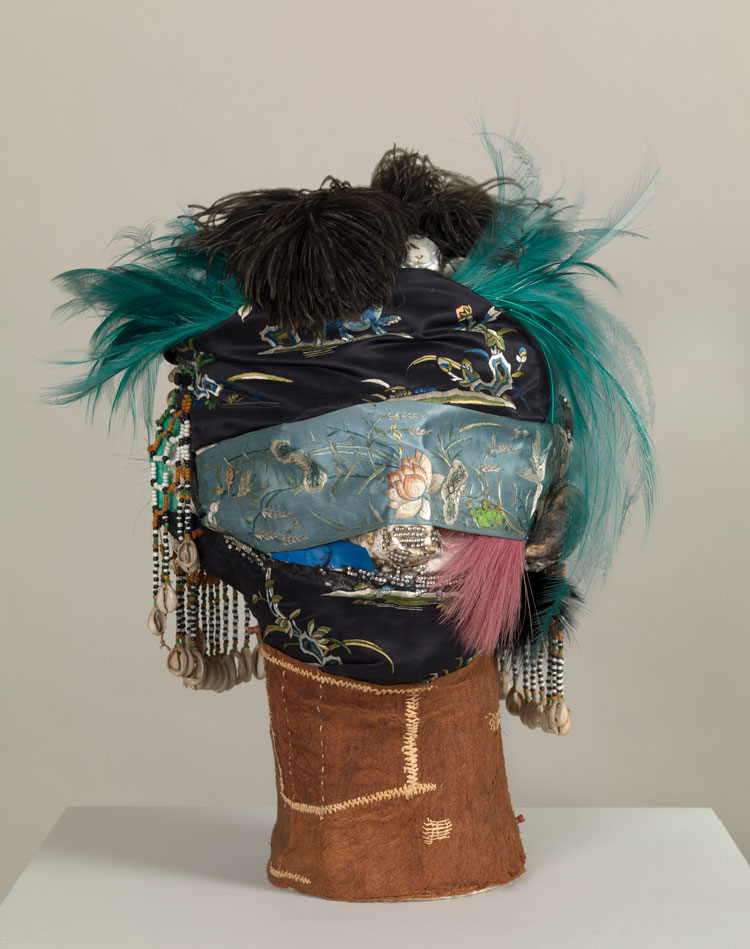 The 1930s was the most fertile decade of Agar’s career. She strained in dozens of different directions at once. Angel of Anarchy (c1936-40), a plaster bust of Bard wrapped in fabric and feathers, now hailed as a pioneering example of the surreal in fashion, is paired with the Angel of Mercy (1934), where a similar cast is decorated in collage and watercolour to become a benevolent guardian.

Collaging, whether on a flat plane or through assemblage, became a favourite technique. Agar was an inveterate beachcomber. A cabinet at Whitechapel shows her miniature sculptures. One consists of a shell stuck atop a sea urchin on a base of bark, another an orange painted stone wrapped in a vertebrae . They seem like sacred objects in a watery cult, with the magical effect of making nature mysterious. It is in these mediums, too, that Agar seems most to push boundaries. Untitled (Box) (1935), in which a dried seahorse, shells, feathers and other debris are held in a sort of shadow box, preempts Joseph Cornell, while Erotic Landscape (1942), which centres around a cutout photo of a nude woman, might prefigure any amount of British pop. 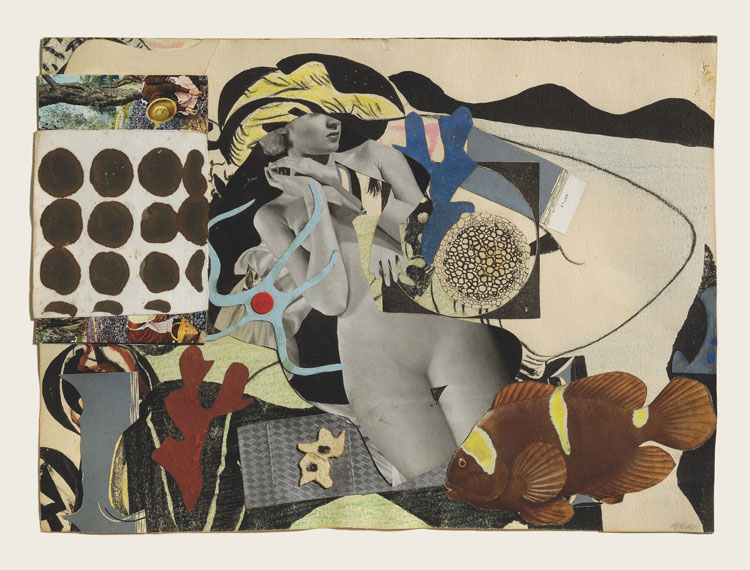 The juxtapositions enabled by collage also allowed Agar to develop one of her favourite subjects, a sort of animism connecting humanity to animals, vegetables and minerals. She collaged precious stones, sea creatures and leaves inside silhouettes of human heads and hands. Philemon and Baucis (1939), based on a story from Ovid in which a married couple are metamorphosed into trees, features two trunk-like columns that nevertheless show hints of their previous humanity. Elsewhere, in a 1936 photographic series, the rocks of Ploumanac’h in Brittany are portrayed as if living beings. Agar cheekily nicknamed one “bum and thumb”. 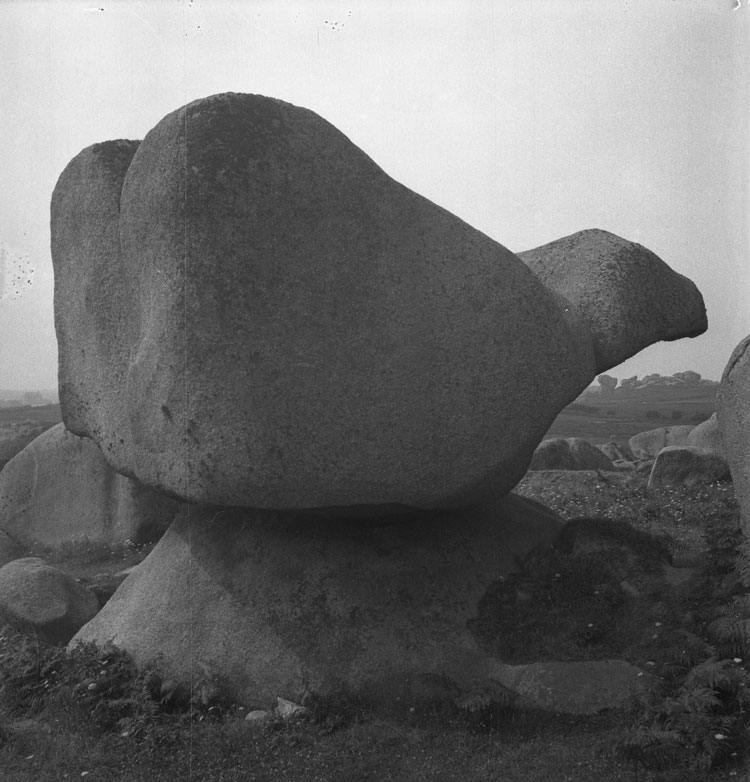 When war broke out, this fecund period drew to a close. Agar fell into a torpor, which haunted her until a 1953 trip to Tenerife reawakened her love of nature, sea and sky. Painting once again became her primary medium. One period saw her experiment with drip painting, leading to some strangely psychedelic, encrusted curiosities. Agar discovered acrylic in 1965 and devoted her many remaining years to mastering it. Although her pioneering decade had passed, there is a lot to enjoy in these later works, the oeuvre of an artist having fun. She painted almost every day until her death, aged 91. “Life’s meaning is lost”, she wrote, “without the spirit of play”: a message that reverberates today. 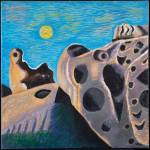