In the still eye of the swirl of the happening art that opens Manhattan’s autumn season stands a small, beautiful and defining exhibition that makes a case for process as mantra, manifesto and trophy 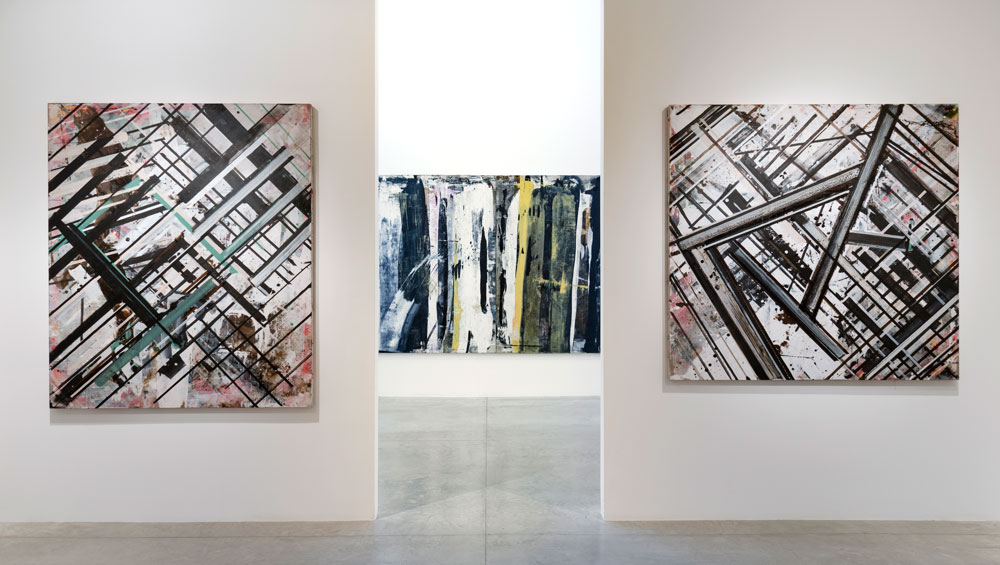 A New York autumn is all about statement: if you don’t come running out of the September gate, you will be trodden underfoot and mixed in with the mulch of the wind-scattered leaves. Clamouring for attention like a posse of macaws have been restaurant openings, fashion week, the police-siren buildup to the opening of the UN and, most colourfully and noisily, the season’s inaugural art shows. Our museums are presenting material targeted to draw front-page reviews; our public spaces are sprouting sculpture of architectural dimensions and, building from Thursday night openings so choked that the mega-galleries are inching forward to Wednesdays, West Chelsea has converted to the world’s largest art fair. With 100 galleries and counting offering top wares, and only a 6-8pm time slot to cruise all of them on opening nights, viewer participation relies heavily on word of mouth.

Singling out the season’s most tweet-worthy, opening night acolytes tracking our Black Art Matters moment orbited Lars Fisk’s satirical softballs at Marlborough Chelsea, lined up outside Hauser Wirth for Rashid Johnson’s black soap, shea butter and horticultural installations that comment obliquely on cleansed grime and forced growth, and crowded into Jack Shainman’s galleries for Meleko Mokgosi’s large-scale, text-supported paintings which illustrate the interrelationship between southern African liberation movements and communism, offset by “lerato”, the Setswana word for love. Photography fans filed into Pace for Michal Rovner’s primal, disquieting, wall-commanding electronic videos of a nocturnal animal world, subtly manipulated to unsettle the human subconscious, and circled Robert Polidori at Paul Kasmin as he expounded on three panoramas of so-called dendritic, or auto-constructed, cities in India – one pieced seamlessly together from myriad wide-angled takes, and another, of a 60-foot road shot over 29 hours, that forms a continuous printed photo. Drawing weighs in masterfully at Winston Wachter with Ethan Murrow’s outsized evocations of man’s irrational attempts to rescue a water-starved planet, and at Kasmin’s studiolo space with Roxy Paine’s internalised investigations into the interplay of organic and mechanical systems through layered compositions of bionic forms, classical imagery, industrial signage and imaginary cartography. Galerie Lelong supplies the wow factor with Sarah Cain’s 2,500-square-foot, girly, glow-painted floor that punches a stiletto through the traditional concept of a mural, and Cheim and Read makes the case for the fertile evolution of Lynda Benglis with glitter-papered chicken-wire constructions evoking bleached bones caught in headlights.

Tellingly, though, the art pundits and prognosticators – the Guggenheim’s Richard Armstrong and Thomas Krens among them – were to be found at what must be called the show of the moment. Ed Moses: Painting as Process, curated at Albertz Benda by the legendary Barbara Rose, is a mini-retrospective of epic dimensions that raises the gallery’s profile to museum level with a storied oeuvre that has informed 60 years of West Coast art and marches it boldly forward into its seventh decade.

In the 1980s, when I was immersed in the Los Angeles art scene – reporting on a hard-drinking, weed-smoking, skirt-chasing dude-bunch involving Billy Al Bengston, Ed Ruscha, Larry Bell, John Altoon, Eric Orr, Ken Price, Ron Cooper, Peter Alexander, Tony Berlant and Dennis Hopper – Ed Moses was already up there with Richard Diebenkorn, John McLaughlin and Sam Francis. Name a roster, he was on it; a museum, he was in it.

He had already introduced his signature grid, and worked it to what we thought at the time its penultimate convolution of under-over abstraction. He was working flat out, on up to 10 canvases simultaneously, all spread out on his studio floor or outdoors on splattered concrete that passed for a lawn. Talk to him about his process and he would steer you to no process. Ask him where his ideas came from and he would answer: “From being pissed off.” Moses admitted to being obsessive – if something didn’t “pop”, “I’d make another one, another one, another one” – but he disliked, and still does, talk of creative inspiration. And you couldn’t ask him what a work meant: “Just look, don’t think. It is what it is.” What mattered was the moment, drawn from his engagement with Buddhism – he continues to meditate every morning – tossed in with that 60s indulgence of impulsive spontaneity that he still waves like a banner. Apart from one steadfast rule (no halogen lighting – it destroys the drama, the romance), “it’s all sort of arbitrary and intermittent”. Moses might choose one colour for everything, or mix up a new palette. If scratches or imperfections remain, he waves them off as part of the process and therefore “part of me”. His crackled paintings came out of the happy accident of falling on a finished work and liking what the puncture did to the surface. Action, permutation, convulsion – all have to be made visible. Moses calls himself the Mutator: his reputation as a teacher was of a stellar disrupter.

His own introduction to art, as circuitous as his worm paintings, remains defining: a drop-out from pre-med (“I wasn’t smart enough”) led him to an art class where the eccentric Art Institute of Chicago’s Pedro Miller overturned an ashcan, sat on it and began teaching. The eureka moment came when, instructed to make a portrait, Miller’s students took up their pencils, while his irreverent new pupil dipped his fingers into pots of colour and made a finger painting. “You’re an artist,” pronounced Miller.

Just turned 90 and going strong, Ed Moses has proved the definition of “artist”. With a restless promise that won him a solo show in 1957 at the then nascent Ferus Gallery, he never ceased to experiment. He worked with latex, to great sales and acclaim, but reverted to painting. He introduced the grid, investigating its infinite possibilities through variations that he attributes to accident but that speak to sequential resolutions arrived at through exploration and deliberation. When he needed more reach, he added panels; when he wanted pop, he inserted metals. Around 1987, the grid morphed into squiggles – he called them “worms” – and when he exhausted their contribution began juxtaposing materials that resisted each other. He manipulated his process by scratching or scraping the surfaces and switching to tools that allowed him to drag and layer more paint. A retrospective at MOCA (the Los Angeles Museum of Contemporary Art) served to galvanise new directions; pushing back against the dark undertone of “memorial”, Moses moved radically on, to incorporate fluorescence, glitter and elements sprayed through netting. Lest abstraction sideline him, he explored innuendo, overtly sexual imagery that he floated into allusion. He flirted with sponge-painting, snap-line painting, erasure. Periodically, like a dybbuk, the grid returned; sometimes diagonal, sometimes blurred, and always crisscrossed in a vertigo-inducing ambiguity of interlocked planes. The process moved to craquelure, the effect achieved through that famous accident, now recaptured by thrusting a fist or elbow through layers of dried paint, applying a medium that Moses called his “secret sauce”, and then layering more paint until, “wham!” it worked.

The true secret sauce has been his prodigious work effort (up to 90 paintings a month, three-quarters of which he destroys), his immersion in the present, and a discipline he attributes in equal parts to craft and to an irreverent reverence for what he perceives as magic – that instinctive, inexplicable gift of the shaman that keeps his work fresh, startling and wise.

Reflecting on why this show comforts as it dazzles, I looked around at the hip, hop and jangle of what passes this season for high art. At the storied PS1, where first-comers had their choice of tattoos by six Gagosian artists applied to whichever body part they held worthy. At the Park Avenue Armory, where advanced reservations allow you to sit through an hour of grating grief staged by Taryn Simon, with mourners imported from threatened nations who keen in isolated towers at pitches that violate your eardrums. At the Guggenheim (but, of course!), where Maurizio Cattelan’s solid-gold match-point toilet, acing Duchamp’s so last-century urinal, is installed “in a little room, waiting for you, whenever you need it”. At MoMA’s bombastic autumn opener, titled “and then leave me to the common swifts”, where you navigate a floor – through regurgitation of rubble, blood, buckets, clothing, dolls, variously painted surfaces and stained furnishings that were “chosen”, says the checklist, (meaning, found? made? manipulated?) by the German artist-sensation, Kai Althoff. Coming, too, soon, at the Hudson Yards, you will climb the 2,500 steps to nowhere of Thomas Heatherwick’s 15-storey, $150m (!) jungle gym, Vessel.

And so, for the most part, it goes, this jagged, jarring, jugular cacophony that is drowning out the basso continuo of lasting and meaningful work. That a 90-year old artist (why am I even mentioning his age?) can override the clamour with the primary tools of canvas and paint is a joy and a solace of a very high order. 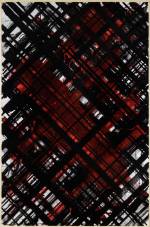 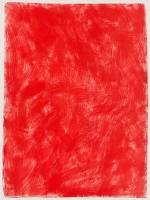 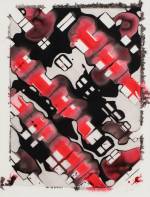 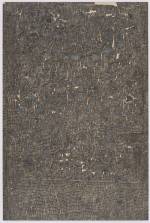