“And how old is the artist?” is amongst the first questions asked by collectors pondering the purchase of a new talent, to which the correct answer is always young, very young. Because quite simply the vectors of an artist’s potential success, and thus financial appreciation, can be precisely plotted by how much they have already achieved by a certain age, and the marketability of their fresh jeunesse. Of course everyone enjoys betting on emergent young talent in every cultural domain, the latest teenage novelist or prodigy musician, the difference being that with art you can actually make a monetary profit on your gamble.

We all love the young, not least the schadenfreude of seeing what happens as they get less so, but when an exhibition is devoted to the youngest and newest of visual artists, representative of their generation, it is inherently compromised, no, energised, by a speculative shadow. Thus Dynasty, a sprawling exhibition which has taken over not only the Palais de Tokyo, a space specifically devoted to modish youth, but also the neighbouring Musée d’Art moderne, to present a panorama of young French art today cannot avoid a competitive or even commercial subtext.

Though the curators are keen to stress that this is merely a selection, rather than the definitive choice of current French art, it remains obvious these artists have here been voted “most likely to succeed” and that none of them are over 35.
Such age limits are always the cause of much grief and gnashing of teeth, the argument being that in the case of the plastic arts youth is no guarantee of talent, indeed that maturity is preferable. When recently the New Museum in NY mounted a show of artists aged 33 and under entitled Younger Than Jesus, a rival exhibition responded across the street, of actively practising artists aged 83 and over, some in their late 90s, entitled Wiser Than God. But it is always fun to see what a supposedly “new” generation is up to, and equally enjoyable to witness the spluttering and squealing of those just too damn old to participate. It must also be admitted that in the annals of modern art nearly all the stars found their signature style by, say, 35, and there are few examples, Lichtenstein and Barry Flanagan for example, of those who hit it at forty.

Dynasty has, obviously, the added frisson of attempting to promote specifically French contemporary art, a form that everyone loves to claim that nation is now incapable of germinating. The failure of France, and specifically Paris, to attract any attention for its artists, the much mentioned “deadness” of the entire scene, seems to be a self-perpetuating disaster, all the more overt for the contrast with Paris’s cultural centrality for much of the 20th century. There are a small handful of young French artists with international reputations, but in this case ‘young’ means under 50, just, and most of them live and work abroad.

But now we can stroll the vast spaces of these two adjoining institutions and take our time admiring the newest of the new and Frenchiest of ze French. Dynasty has a lot of art and covers a great amount of physical mileage, its 40 selected practitioners exhibiting one work each in both of the museums, which creates a curious complimentary mirroring effect. Thus the sense of dèja-vu, having seen that before somewhere, is quite literally true, as one has just clocked it already in neighbouring galleries. But much of this art also looks very familiar in its similarity to older, more established, work, which is always, understandably, the case with young practitioners, Harold Bloom’s fabled “anxiety of influence”. Whether the young artists know of their precursors, or more probably are entirely oblivious, such cultural amnesia allows for both différence and répétition.

That is not to say these artists are copycats or without merit, a lot of the work is clearly commendable, and there are a few stand-out successes, for example the aggressively engaging paintings of Raphaëlle Ricoll, or the fascinating pseudo-documentary The Coming Race by Negra & Kinoshita. The real problem with Dynasty is not that quite a lot of the work looks like other work by other artists, but rather that it all seems acceptable, good, promising, mildly interesting, only ever somewhat slightly surprising. Perhaps this is partly the fault of the exhibition-architecture; too clean, too neat, too polished, with too much space and separation between each exhibit and simply too much stuff to maintain any excitement or tension. But fundamentally the problem remains that nobody, outside the tight tiny circuit of contemporary art specialists, has any interest in any of this, that the buzz, controversy, anger and passion such an exhibition might generate elsewhere is absolutely lacking, the resounding silence throughout France suggesting a big-budget production of The X-Factor in a country without TV reception. 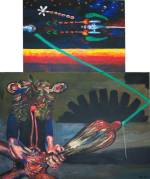 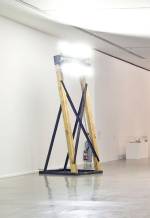