The latest edition of the venerable festival imagines art as a collaborative endeavour that transcends individual artworks and artists. It’s sprawling, unconventional and at times unmanageable, but delivers a shot in the arm 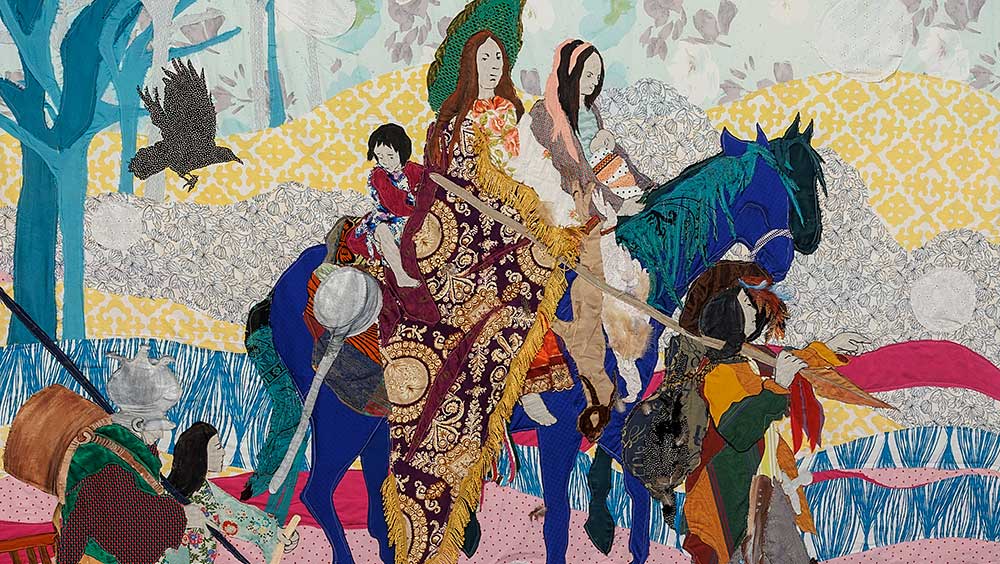 No one could ever call Kassel beautiful. The central Germany city was flattened in the second world war, then hurriedly rebuilt with little of the sensitivity to history seen elsewhere in Europe. The result is a grey waste choked by cars, with only occasional reminders of its former glory as the capital of a Landgraviate. But it does have some extraordinary assets. It is young and diverse, with almost two in five residents born outside Germany. Its western suburbs contain the Bergpark Wilhelmshöhe, a stupendous mountain park littered with fountains, artificial ruins and an enormous hilltop statue of Hercules. And, every five years since 1955, it has been home to Documenta, often considered the world’s most important contemporary art exhibition, setting the agenda for curators to follow. 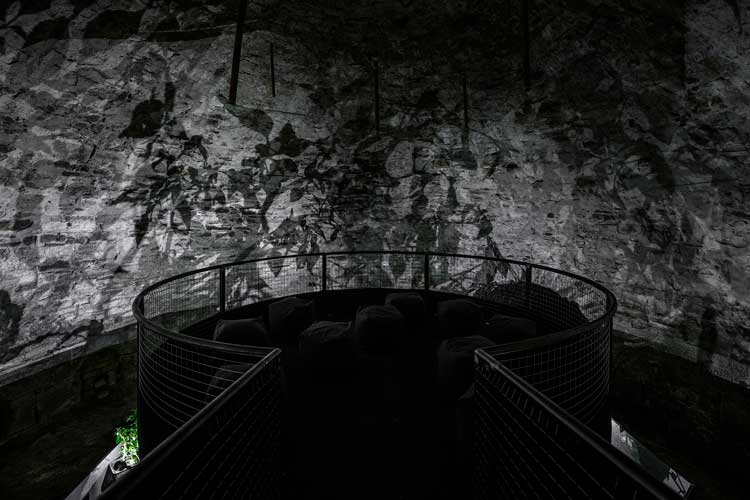 Documenta has sometimes seemed to look away from the city it inhabits. Previous editions invited the cream of the international art world to treat Kassel as a blank canvas. For the 14th iteration, in 2017, curator Adam Szymczyk went so far as to open a parallel exhibition in Athens, as if the idea of spending five entire years in Kassel was too much to bear. Documenta 15 immediately tries to make up for that. The exhibition sprawls out into the city’s post-industrial suburbs, into vast factories, community centres, a church and a boat hire; by the end of two long days, I began to see Kassel’s charms. There is an expanded focus on events, from walking tours to cooking workshops. And the basement of RuruHaus, the exhibition’s temporary base in a vacant high street unit, houses a display celebrating the residents of Kassel’s eastern stretches, including a Syrian food truck, an eccentric artist-collector and a community-run agricultural area. 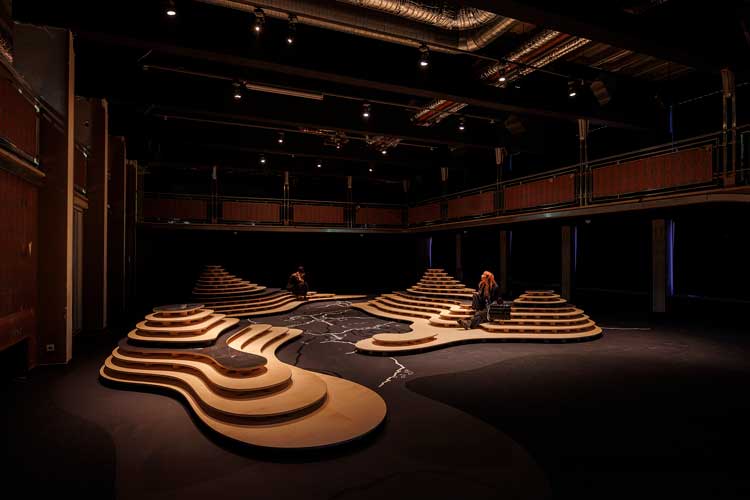 Documenta 15 is directed by Ruangrupa, a curatorial collective that supports art in Indonesia. Ruangrupa commissioned 53 artists and collectives, with an emphasis on the latter. Many of these official participants invited further artists and collectives. The result is an exhibition that sprawls, even by the standard of its predecessors. This is an exhibition of exhibitions, the best of which would feel like fully formed institutional shows. The focus on collective also means that this exhibition features barely any internationally known figures, the sort who dominate the museum and for-profit gallery circuits. The meagre few present, notably Hito Steyerl, are here as members or invitees of larger groupings. 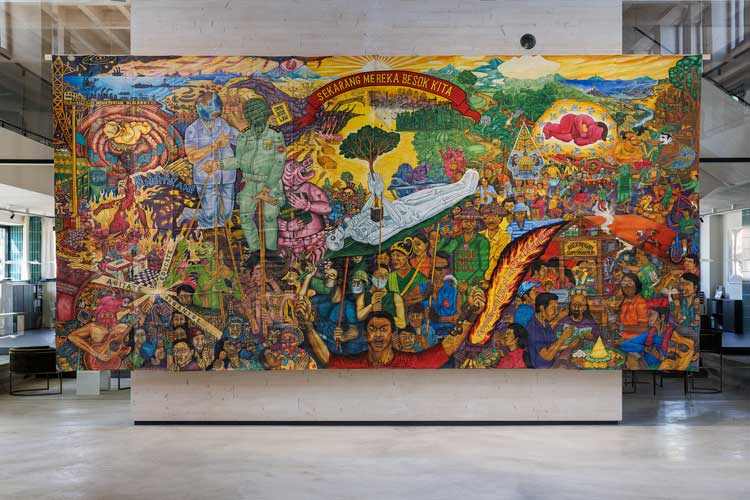 Ruangrupa’s focus on the collective links to this edition’s main theme, the lumbung: the Indonesian word for a communal rice barn, here imagined as an “alternative economy of collectivity, shared resource building, and equitable distribution”. The onus here is on actions rather than outputs. Time and time again, art is presented as a process rather than a set of fixed, material objects. Hastings-based Project Art Works, which exhibits in several venues, is a scheme that brings together neurodivergent artists. Trampoline House is a refugee centre in Copenhagen that uses exhibitions and workshops to help migrants adapt to their new, often repressive country. Indonesia’s Taring Padi – which found itself at the centre of an antisemitism controversy during Documenta’s opening days for exhibiting a work that appeared to depict Israeli soldiers as pigs – is a protest group. The vivid, agitprop cut-outs and posters they have arranged inside and around a disused swimming pool are relics of political actions. 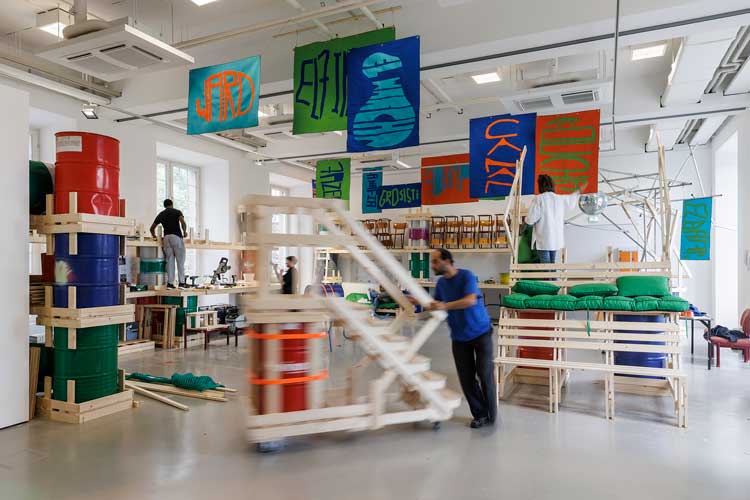 It is no longer radical to envisage the art gallery as a place focused on activity over artificers. From performances engaging in conversation to visiting adult playgrounds such as Robert Morris’s Bodyspacemotionthings and Carsten Höller’s omnipresent slides, contemporary art has long embraced experience as a site of creation. But what is strikingly different about Documenta 15 is the way in which the hand of the artist is so often peeled back. Artsperience is often led by artists, who assume the roles of ringleader, shaman and presiding genius. The artist is present. 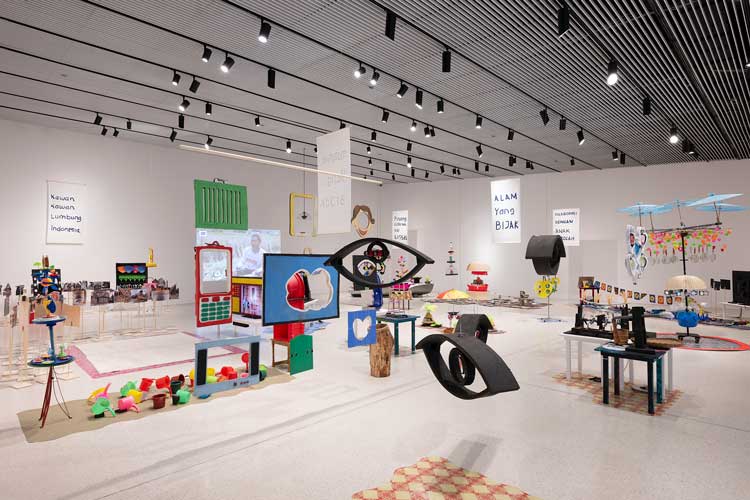 Yet time and time again, Documenta 15 renders the artist near-invisible or, at the very least, secondary to visitors. Indonesia’s “educational knowledge-sharing platform” Gudskul, part-founded by Ruangrupa, sets the tone in the Fridericianum, Kassel’s main contemporary art museum. Their vast space contains posters, textiles, rugs, books, journals, mind-map diagrams, a four-sided chess set, a tabletop role-playing game about running an art collective and a “temporary meme lab”, all arranged around ample seating to invite you to settle down and participate. Tunisian collective El Warcha has a workshop where you can make your own sculpture from old chairs. Thailand’s Baan Noorg has erected a miniature skatepark, promising free entry to those who turn up with their own board. And Brazilian artist Graziela Kunsch has turned two rooms of the Fridericianum into a daycare centre, complete with play area and daybeds. 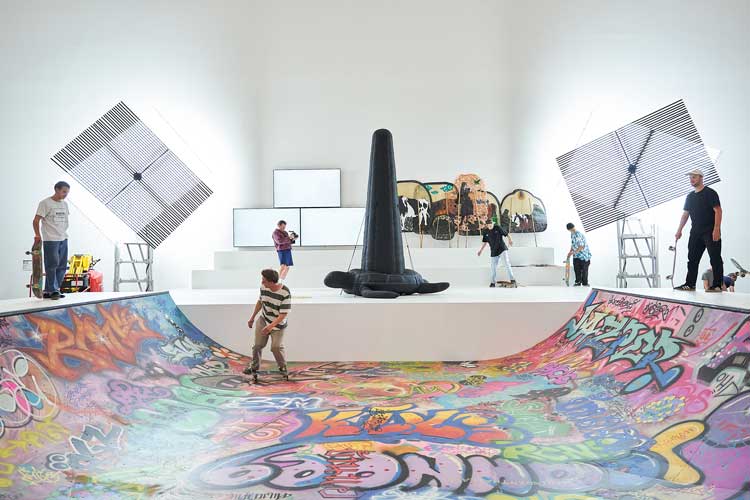 Nearby, through a window on a staircase, I glimpse the members of one collective eating and conversing, with an infectious energy. You want to give it all up and join them. Perhaps in reaction to a particularly horror-filled five years, this Documenta celebrates the power of community. The Indonesian storyteller Agus Nur Amal PMTOH has filled a room with whimsical sculptures designed to aid musical storytelling. Steyerl’s Animal Spirits (2017-22), a film work and installation that encompasses an enraged shepherd, a cheese-based currency, a CGI animal death match, a gurning John Maynard Keynes dancing in a bearskin and an animated Lascaux cave, is a giddy comic masterpiece. Collective Atis Rezistans, meanwhile, presents works from its Ghetto Biennale, which invites international artists to create works from scrap materials in Port-au-Prince, Haiti. Many of these materials seem to include human remains. A Tim Burton-esque corpse bride stands at the altar, glorifying in her own blasphemy. 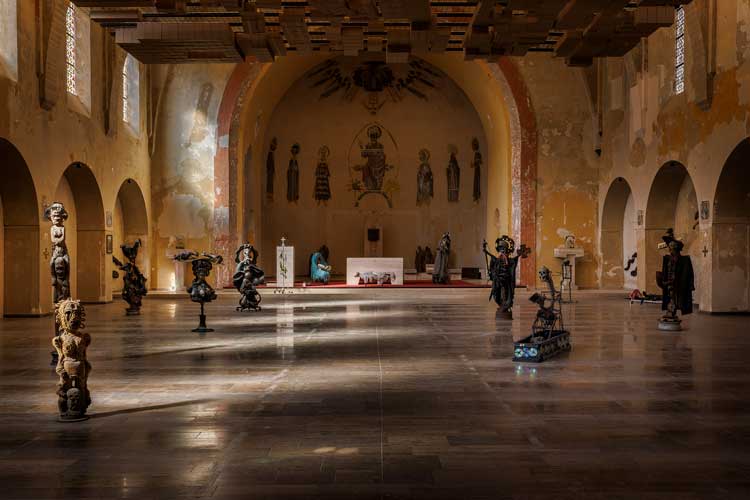 All of which is not to say that this work lacks the political charge that has characterised recent editions. Among the most outstanding individual works is Safdar Ahmed’s Border Farce (2022), a short documentary about Kurdish-Iranian metal guitarist Kazem Kazemi’s horrific experiences as a refugee attempting to enter Australia. Kazemi’s harrowing narrative is effectively juxtaposed with his abrasive music. Sudan’s Khalid Albaih has filled an underpass with speakers that play first-hand accounts of Denmark’s punitive immigration system, each painted to blend into the surrounding graffiti. 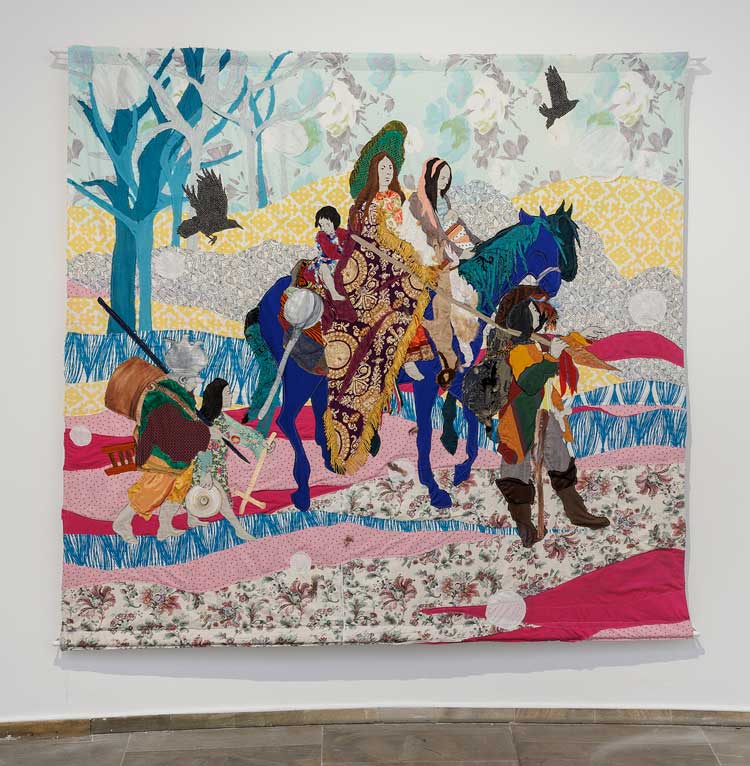 Not all sections are successful. Ruangrupa’s hands-off approach has led to a wildly uneven quality, so that those seeking a conventional showcase will leave disappointed. There can be jarring tonal shifts. A huge variety of approaches prevents the whole from hanging together. The sections that resemble well-curated group shows – of which RomaMoMA, a presentation of works by Roma artists organised by OFF-Biennale Budapest, deserves special mention – seem to come from a different world than text-heavy pieces that resemble public information campaigns, or those that gather an incoherent set of work unified only by the friendship of their creators. And there is an unwieldy proliferation of printed matter, far too much for anyone unable to stay for the festival’s entire 100-day stretch to make much headway with.

Yet, despite its inconsistencies, Documenta 15 is a shot in the arm. It posits that today’s real art happens away from star artists, big institutions and private interests, as well as the critical framework that has developed to support and interpret it. One artwork by the Aboriginal Australian artist (and collective founder) Richard Bell – ironically one of the more gallery-friendly in the show – shows a Duchampian urinal marked with R Bell 2017, attached to glossy inflatable pig. Titled Western Art (2020-22), it feels like a grenade tossed at a declining age of frivolity and object-fetishisation. In an era in which old certainties are being washed away with alarming celerity and cruelty, art will have to change too.

* On 16 July, following the controversy over imagery in an artwork by Taring Padi, Sabine Schormann, the director general of Documenta, resigned. Documenta’s supervisory board expressed its ‘profound dismay’ about ‘clearly antisemitic’ content. An interim director is to be appointed. 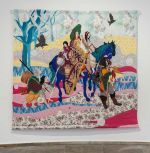