The showcase of the four photographers shortlisted for this year’s Deutsche Börse photography prize opened in the second week of April at the Photographers’ Gallery. Now in its 17th year, the prize’s commitment to honouring photographers who introduce “compelling new ways to expand our thinking about the medium”1 and who have “significantly contributed to photography in Europe” over the preceding year is as strong as ever.2

The candidates hoping to receive the £30,000 award when the winner is announced on 12 May cover an international spread: they are Richard Mosse (Ireland), Alberto García-Alix (Spain), Lorna Simpson (America) and Jochen Lempert of Germany.

Photographers are nominated for the prize based on the success of a particular exhibition staged or publication released during a given time (in this case, between 1 October 2012 and 30 September 2013), and although the prize prides itself on having launched many careers, the 2014 shortlist seems to consolidate and reward established artists more than it signals the vanguard of photographic practice. Lempert is nominated for a major solo exhibition and Simpson for a retrospective, both markers of institutional recognition; Mosse is nominated for his exhibition The Enclave at the Irish Pavilion at the Venice Biennale, arguably contemporary art’s most influential biennial; and García-Alix’s Autorretrato/Self-Portrait, the 2013 publication that brought him to the attention of the Deutsche Börse jury, is a body of work made over four decades, from the early 70s to now.

In fact, García-Alix’s work as shown here is the only project of the four that is not resoundingly contemporary in style and spirit. Born in 1956, the artist witnessed the last years of Spanish oppression under the dictatorship of Franco, followed by the liberation of his culture from the late 70s onwards after Franco’s death. García-Alix’s experiences are documented in medium- and large-scale black-and-white photographs whose blurry, haunted quality echo David Lynch’s photographs of dirty corridors and decrepit buildings that hung on these same walls earlier this year. This is portraiture not of a person, but of a world, or a world-view – albeit one that wavers and shifts with the tides of social and political change.

Though García-Alix’s Autorretrato/Self-Portrait is a powerful and devastating series of images, it is far from innovative in its exploration of the self-portrait genre, nor does it really expand the technical and aesthetic perimeters of current photographic practice. Though the photographer’s experiences are fascinating and extreme, there is, paradoxically, a whiff of the un-self-critical, even the self-indulgent, in the artist’s constant restyling and restaging of himself in front of the camera. Self-Portrait, Carnival (2002), for instance, shows the artist in a lace mask, peeing into the toilet while staring defiantly at the camera, hand on hip. The irony that is raised by the covering of the face combined with the unabashed expulsion of urine from the naked penis is somewhat lost, or overegged, by the aggressive “Look at me!” quality of the pose.

A much more challenging examination of the self-portrait as a photographic genre is seen in Simpson’s series Summer ’57/Summer ’09(2009), in which she uses found archival material brilliantly to mock the false honesty that a self-portrait, especially a photographic one, has long projected about its maker-sitter. Having discovered a set of negatives from the 1950s that feature an anonymous black American woman posing, Simpson worked to restage as accurately as possible each of the scenes, from dress, props and backdrops to gestures and stances. The unknown sitter is reincarnated through the body and the lens of Simpson, and the photographs of each (the originals, and Simpson’s recreations) are displayed mixed and unlabelled on the wall, leaving the identification of “original” and “copy” to the audience’s judgment.

Alongside the now well-worn questions of authorship and authenticity that photography has sought to address since the rise of appropriation art in the 1980s, Simpson’s project offers a critique of women’s self-representation, and of the representation of minorities, in popular and commercial photography during the 20th century. But perhaps the most interesting observation that Simpson makes is that a self-portrait is really no more “reliable” than a portrait taken by another. While Simpson’s anonymous mid-century muse is a sitter for someone else, probably male, Simpson’s own photographs are taken by herself, of herself, and yet her comparison shows that neither looks more or less stylised than the other, having inherited their poses from others in a process of imitation and repetition in which it is human nature to participate.

Where García-Alix and Simpson have both made the self their main focus, Mosse and Lempert are connected through their use of specialised photographic techniques, at pre-production, production and post-production stages. Lempert’s early training as a biologist has led his photographic work into the realms of the microscopic and the forensic. He uses traditional media – black-and-white photography, photograms and other darkroom processes – to produce lyrical portraits of nature that show its own processes moving inexorably onwards. Three aerial photographs of swans on a lake, each shot a few moments apart, make a feature of the birds’ watery imprints on the lake’s surface. A photogram littered with the white silhouettes of tiny frogs’ bodies is a sweet and amusing nod to nature’s patterned chaos. Although there is little here to provoke excitement or spark the imagination, the grainy, unfinished quality of Lempert’s silver prints seem to get to the literal nitty-gritty of existence and to inspire a certain nostalgia, in a similar vein to British artist Tacita Dean’s recent films on the imminent obsolescence of silver-based photographic materials.

Mosse is represented in this exhibition by his 2012 series The Enclave, a project that also employs a rarely used technique, especially for fine art photography: the infrared film used in guerrilla warfare to convert green hues to pink, thus revealing the location of camouflaged figures. The Enclave consists of large-scale photographs and stills reproduced from a six-channel film that chart the extensive, continuing conflict in the eastern Democratic Republic of the Congo. This is a war characterised by extreme brutality often carried out in isolation via ambush in expanses of deserted land, yet Mosse’s huge red- and pink-saturated images give the hills, trees, guns and soldiers a weird vibrancy that in some ways makes this conflict seem less, rather than more, real.

As the only colour works in the exhibition, it would be easy to hail Mosse’s landscapes as the show’s best work by virtue of their aesthetic richness. But really it is the symbolism carried by the photographs’ saturation that puts Mosse to the top of this four-person pile. The cultural perception and interpretation of colour is a complex subject, and to rose-tint a conflict in this way is a brave move, particularly in light of debates on the aesthetics of trauma that have been fought since at least the time that artists began to attempt representations of the Holocaust. Mosse’s self-confessed aim is somehow to span the divide between photojournalism and fine art photography; here, the infrared film serves that purpose by being at once photographic medium, political and military weapon, visual enhancer and historical locator, filtering supposedly generic, familiar images of war and making them specific to a time and place. If anyone has succeeded in presenting “compelling new ways to expand our thinking about the medium”, it is Mosse – and, as we’ve seen, that’s the very least of his achievements. 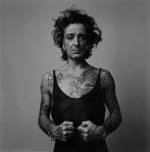 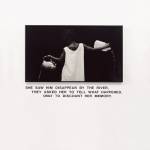