Dennis Hopper: On the Road

Dennis Hopper: On the Road

Before joining the leagues of his subjects, entering into the world of celebrity as a cult director and actor, Dennis Hopper was a successful photographer who captured the anti-establishment, countercultural spirit of the 1960s through images of such iconic figures as Andy Warhol, Jane Fonda, and Paul Newman.

Born in 1936 in Dodge City, Kansas, Hopper used a Nikon camera with a 28-millimeter lens given to him by his first wife, Brooke Hayward, in 1961. His candid images remain uncropped, following the early advice of movie heartthrob James Dean to use his hobby of photography to practise framing movie shots, saying “you’re probably going to want to direct films someday, and you can’t crop film.”

Dennis Hopper: On the Road at Museo Picasso Málaga displays a selection of 141 black and white photographs, the majority of which were taken between 1961 and 1967, alongside clips from his movies. Also on display are three 1964 screen tests by Andy Warhol, a set of posters for movies in which Hopper was involved, and contextualising documentary material such as photographs by other artists, books, magazines and records. 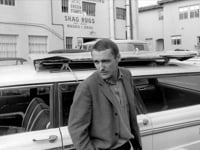