'Cybernetics includes all observable systems—whether biological, electronic, industrial, economic or anything else.'

Michael Blee's assessment of the ICA 'Cybernetic Serendipity' exhibition (September issue) seems to me well-reasoned, but there are some points which should be taken up.

1. He complains that the term 'cybernetics' is used by the ICA too loosely. I suggest that his own definition of the word is a narrow one, for which there are serviceable substitutes ('control system', 'homoeo-stasis', etc.). The scope of cybernetics includes all observable systems—whether biological, electronic, industrial, economic or anything else. Further, W. Ross Ashby writes in An Introduction to Cybernetics that it

'takes as its subject-matter the domain of "all possible machines", and is only secondarily interested if informed that some of them have not yet been made, either by Man or by Nature'.

Cybernetics, for Ashby, is comparable to modern geometry, which can 'treat accurately and coherently a range of forms and spaces that far exceeds anything that terrestrial space can provide'.

It should not be necessary to press the relevance of these concepts to 'abstract' or 'non-figurative' art (which would get us into very deep water) for us to see the cybernetic approach as a matter of the widest cultural significance. This was certainly the teaching of Norbert Wiener.

Of course, some of the ICA exhibition was pretty trivial, and Mr Blee is right to say so. We should certainly raise our voices against any tendency for the idea of cybernetics in art to become a mere fad of the sixties.

2. Mr Blee's statement that the computer features 'only as a tool never as a creative personality in its own right' raises some interesting semantic questions. Clearly the computer is not a personality, but that is too self-evident to bear much meaning. What is a tool? Many a creative personality may be treated as a tool by the corporation he works for. How can we define creativity except as something which mere tools are incapable of? The distinction between instrumentality and creativity seems to depend on the intention or judgment of the observer. Thus a scientific programmer treats the computer as a specialized extension of human capabilities of the same order as a telephone. But many of us are interested in those cases where the computer comes up with some response which the programmer had not predicted. The concept of the computer as an inert tool, contrasted against human creativity, seems to me pre-cybernetic and not very helpful. After all, the idea of artificial intelligence is now fairly reputable academically.

3. Mr Blee mentions the possibility of a computer being 'supplied with parameters by which to judge the "aesthetic" quality of results'. This as far as I know has not yet been attempted; to make such an attempt with the computer technology of today would be premature. It is another matter, however, to try and establish aesthetic criteria which, as well as being artistically valid, would be intelligible to a hypothetical computer—in preparation for a day when computers are vastly more powerful, cheaper and more accessible. 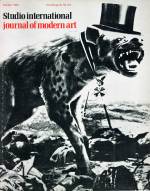 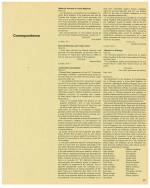