From the shed blown up by the British army to drone-shot footage of the Commons Chamber to a new work referencing Brexit, from the vast to the intimate, this major survey takes us through 30 years of Parker’s work

This perfectly paced exhibition at Tate Britain is the first major survey of Cornelia Parker’s work to be held in London. Spanning more than three decades, it guides us sensitively through the large installation pieces for which she is so well known, such as Thirty Pieces of Silver (1988-89) and Cold Dark Matter: An Exploded View (1991), punctuated by other rooms full of much smaller, more intimate works. There are many themes in this exhibition, but the one that stands out is that of violence. This is not to say that Parker’s works are in themselves violent, but rather that she uses violence as material – think war, drugs, firearms – and as method – squash, cut, explode, shoot – in any number of intelligent and curious ways. 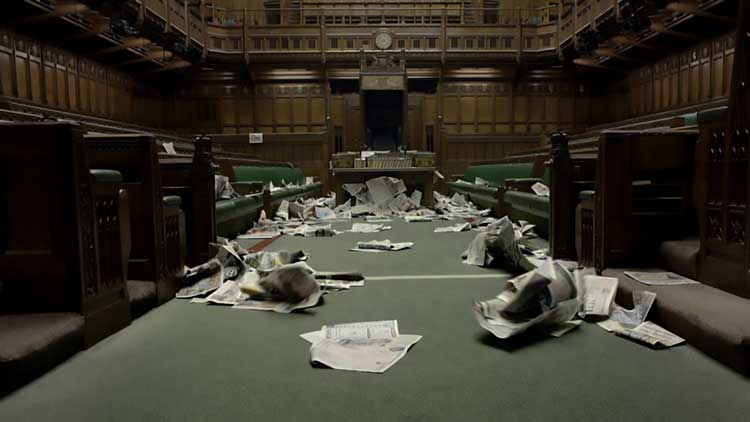 There is a positive effort from the exhibition’s curators to show the full range of Parker’s output, so a good deal of space is given to her films and works on paper (drawings, photographs and prints), not always attended to. Two spaces are dedicated to films that are all, in their own way, emblematic of Parker’s increasing interest in politics: Left, Right and Centre (2018), filmed by drone at night within the House of Commons Chamber, is just one example. Made in Bethlehem (2012-13) refers to the complexity of Middle Eastern politics and shows a Palestinian father and son weaving thousands of barbed crowns ready for the arrival of Easter pilgrims. The mind-numbing banality of the work involved and the difficulty of handling the branches is underlined by the closeups of the father’s calloused fingertips manipulating the thorny materials into shape. 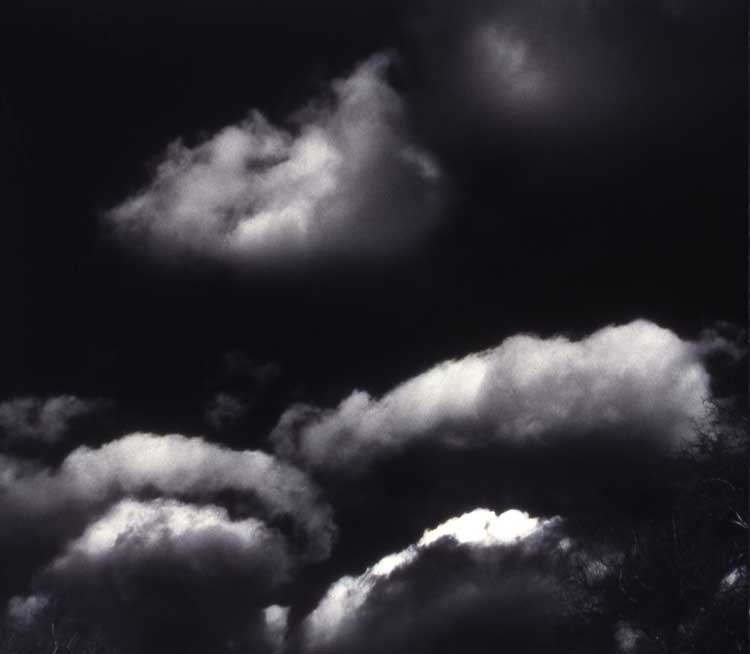 Cornelia Parker. Avoided Object. Photographs taken of the sky above the Imperial War Museum with the camera that belonged to Hoess, commandant of Auschwitz, 1999. Courtesy the artist and Frith Street Gallery, London. © Cornelia Parker.

Photographic work includes the chilling Avoided Object (1999), shot by Parker with a camera that once belonged to an Auschwitz commandant. She was not permitted to leave the site of the Imperial War Museum, from which she borrowed the camera, so she took photographs of the clouds in the sky above. As in many of her works, it is the narrative behind their making that brings so much to our experience of looking. 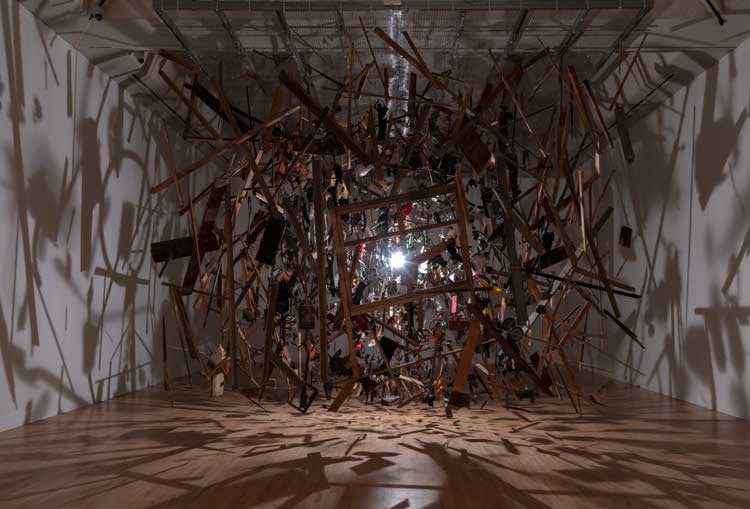 The collaborative nature of Parker’s work and the role of chance are crucial to her making. In Cold Dark Matter, she collaborated with the British Army which blew up a shed at the Army School of Ammunition using semtex. Parker tells how she pressed the plunger that activated the explosion, and the soldiers helped her to retrieve the debris afterwards. For War Room (2015), she visited the poppy factory in Richmond in London where poppies have been made since 1922. The factory saved her the leftover red paper, with perforations where poppies had been punched out. This material is suspended to make the tent-like structure of War Room. In what must have been a huge logistical feat of collaboration, Parker involved more than 250 people to create Magna Carta (An Embroidery) (2015). Commissioned by the Ruskin School of Art in partnership with the British Library to celebrate the 800th anniversary of the Magna Carta in 2015, the work replicates in stitch the Wikipedia article on the Magna Carta as it appeared on the historic document’s 799th anniversary. The 13-metre-long embroidery was contributed to by a range of well-known figures, including Jarvis Cocker, Julian Assange, Shami Chakrabarti and Edward Snowden, as well as prisoners and expert embroidery groups such as the Embroiderers’ Guild. 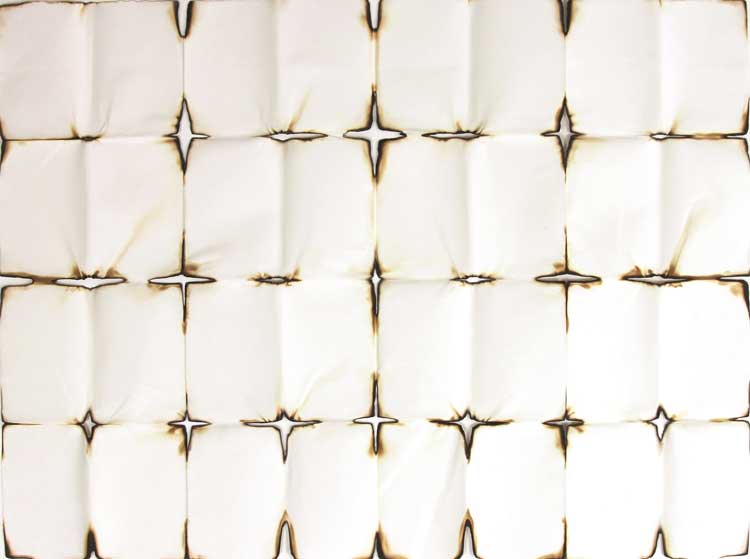 I have already mentioned how Parker uses absence in War Room, in which her main material is what is left behind after the poppies have been punched out by machine. The absence or the negative is another theme that runs through her work. We see an intriguing example of this in The Negative of Words (1996), which is made from the silver residue accumulated from a silversmith engraving words by hand. It took the engraver several months to accumulate enough residue for this work. On a rather different scale, in Black Path (Bunhill Fields) (2013) Parker poured liquid rubber into the cracks in a path in Bunhill Fields in London, where the artist William Blake is buried, and later cast the captured cracks in bronze. Black Path is one of several works by Parker, also including Prison Wall Abstract (A Man Escaped) (2012-13), in which she engages in an oblique way with abstraction to create works that are abstract and representational at the same time. The underlying narrative quality of the works is what gives a representational element to objects and images that otherwise appear abstract.

The shadow world of Thirty Pieces of Silver, Cold Dark Matter and Perpetual Canon (2004) is reprised in a new work by Parker at the end of this exhibition – Island. Harking back to her childhood, she covers a greenhouse with strokes of white cliff chalk. The greenhouse sits on a floor made of tiles recovered from the Houses of Parliament and a central lightbulb pulses inside, casting shadows around the walls. Parker gestures to our uneasy future suggesting, in the exhibition guide: “In our time of Brexit, alienated from Europe, Britain is emptied out of Europeans just when we need them most. The spectre of the climate crisis is looming large: with the crumbling coastlines and rising sea levels, things seem very precarious.”

Beyond the uneasiness of Island, the exhibition reaches out into the permanent collection at Tate Britain where more of Parker’s works are displayed alongside the historical works they reference. Her Stolen Thunder: Tarnish from Charles I’s Spurs (1998) is rather shoehorned into the historical collection between a painting by William Dobson, Charles I’s court painter, and another painting showing a gentleman with fine spurs. Parker’s Room for Margins, which presents the unseen parts of JMW Turner’s paintings as artworks, is much more successful and meaningful in its presentation. Nothing is forced here. To reach Room for Margins, the visitor must walk through a gallery showing Mark Rothko’s Seagram Murals, and on through Tate’s famous Turner collection. As this presentation proves, it is well worth exploring beyond the confines of the exhibition. 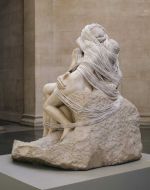