In recent years, traditional handcrafts, particularly knitting, have experienced a boom and drawn a growing number of people of both genders, from children and teenagers to business executives and retirees. Novices and experienced craftspeople have discovered potentials in these crafts far beyond any utilitarian or artistic merit. These potentials include communal, intergenerational, therapeutic and spiritual. Numerous books and articles have been written, delving into the deeper meanings to be gleaned from the materials, processes, products and motivations of those who knit, crochet, quilt and otherwise work with fibre.

Perhaps spurred by the popular fascination with knitting, the staff at the Museum of Arts & Design (MAD) in New York have developed a show presenting fibre art as a unique form offering artists a broad range of possible expressions.1 Radical Lace & Subversive Knitting kicks off an exhibition series featuring artists who use traditional materials and techniques as catalysts for innovative handling and interpretations. The series commemorates MAD’s fiftieth anniversary. The first entry in the series consists of 40 works – some made specifically for the show – by artists from the USA, Canada, the UK, Israel, Iceland, the Netherlands, Belgium, Brazil and Japan.

As a medium, cotton, wool, silk, linen and other fibres are remarkably strong and flexible. Beyond the individual works gathered for Radical Lace & Subversive Knitting, the show as a whole demonstrates that with fibre and other media, and fuelled by their imaginations, contemporary artists are expressing ethical statements, poetic whispers, political commentary, social protest and personal impressions with fibre art. A complete range of adjectives can be applied to an equally wide range of artworks on view: fragile, solid, familiar, eccentric, domestic, public, amusing and disturbing, to name a few. To facilitate viewing, MAD’s Chief Curator, David Revere McFadden, has separated the works into six themes that reflect some approaches and concerns of contemporary fibre artists: Corporeal Constructions, works referencing the body directly and with more obscure imagery; Matters of Scale, works minute and monumental; Light Constructions, works capitalising on the inherent transparency and negligible weight of certain materials; Interconnections, works promoting collaborations between maker, user and viewer; Creative Deconstructions, works that are not built up, but built ‘down’; and Beauty of Complexity, works combining traditional and contemporary materials, techniques and media.

For ‘Untitled (Skulls)’ from 1999, Hildur Bjarnadóttir covered a wood table with a lacy tablecloth crocheted with cotton yarn. Bjarnadóttir's concern is with the power of ‘feminine craft’ freed from traditional confines. The cosy domesticity of the piece is immediately shattered by crocheted skulls dangling from the edges of the cloth. Bjarnadóttir studied at Pratt Institute in New York City and The Icelandic College of Arts and Crafts in Reykjavik. In an artist's statement, she explained the impetus for her chosen medum:

“My interest in textiles comes from growing up surrounded by women doing sewing, knitting and generally making things with textiles. Ever since then I have been preoccupied with the possibilities of that tradition and ever increasingly my subject has become to examine and attempt to find ways and means of changing the dominant traditions in the art world through what seemingly functions as feminine craft.”2

Here, Bjarnadóttir combines long-held notions of textile art (light, lacy, domestic) with her own subversive reading of the deadening effects of propriety. The piece could be conceived as a form of rebellion, or a homage to her ancestors and to the years that they spent working with textiles within strict limitations. Yet, it seems to go beyond rebellion and homage to break free of the limits experienced by her predecessors.

Concepts of the feminine and the domestic include life lived on a small scale. The bird’s-eye view so essential to the process of knitting, crocheting and lacemaking is highlighted in Althea Merback’s knitted miniatures. ‘Ancient Greek Gloves’ from 2005 is just one example of the artist’s miniscule artworks, which she creates with silk thread and knitting needles made of stainless steel medical wire. Most commonly, this wire is used for inserting intravenous needles into patients. Mother of eight-year-old triplets and a 12-year-old son, Merback has knitted since her college years. According to the artist, “In 2000, my fascination with this tiny [one-twelfth] scale merged with my love of knitting, and ever since I have been pushing toward ever new technical and design challenges. Tough as it is to knit on such a small scale, the ‘bug-knit’ scale has allowed me the freedom to create and experiment with designs which, on a larger scale, would be cumbersome and prohibitive.”3

With a much wider lens, Dave Cole moves fibre art outside for public-scale treatment. His ‘The Knitting Machine’ was performed in 2005 at MASS MoCA in North Adams, Massachusetts.4 To ‘knit’ the flag in this performance/installation piece, two John Deere excavators held 20’-long aluminum poles (the knitting needles) for Cole and an assistant, who were suspended 30 feet above ground level. From that vantage point, they navigated a long iron hook to cast yards of red and white felt over the needles. Trained as a sculptor, Cole has for years integrated knitting into his working method. He has stated in interviews that, as a student at Brown University in Rhode Island, he began knitting to sharpen his focus. At MAD, he is representated by two works, ‘Knit Lead Teddy Bear’ and ‘The Money Dress,’ both from 2006. The images he presents with these pieces are disconcerting, for the first is a ‘poison’ toy made of a material, lead, that causes children great physical harm. Toys are made to be picked up, carried, pushed or tossed, but made of lead they cannot be lifted by the young people for whom they are intended. In ‘The Money Dress,’ Cole cut 879 US dollar bills into narrow strips to create a size-eight dress. In effect, Cole has devalued currency and used it in a ‘worthless’ state to make something that might be priced at astronomical figures when invested with new symbolic, fashionable or artistic meaning.

Cole’s choice of materials may seem strange in the context of fibre art, but among the works in this show, there are many that suggest endless possibilities. Edward Mayer, Professor and Sculpture Area Chair at the University of Albany, State University of New York, formed ‘Drawing Over’ from steel shelving, found objects, vinyl tape, wood and plastic zip ties. In this and his other site-specific installations – ‘Drawing in’ (2006, Schick Art Gallery, Skidmore College) and ‘Drawing Out’ (2005, Zabriskie Gallery, New York), for example – Mayer knit together usually unconnected materials for an installation meant to harmonise or ‘knit’ with a building’s structure and environment. ‘Drawing Over’ begins on the museum's second level and travels over a spiralling staircase that leads down to the first level. The installation seems to follow visitors as they descend the staircase. From different perspectives and levels, they can consider how the work interacts with the space and ponder possible meanings for the title. The first impression visitors may have of ‘Drawing Over’ is of a giant LEGO toy upon which it would be fun to climb.

Although a number of the more unusual creations in this show are memorable, at or near the top of the list is Erna van Sambeek’s ‘Body Warmers for a Poor Family.’ The artist made this series of clothing from discarded pages of the international business newspaper Financial Times and Dutch Financieel Dagblad. While the imagery may not be subtle, the execution certainly is and reminds one that, quite often, the obvious is the first to be missed.

Perhaps the most unsettling image is encountered at the very start of the show. ‘Craft Kills,’ knitted in 2002 by Freddie Robins from machine-knitted wool, is a large figure akin to a giant human sock puppet. The figure proclaims ‘Craft Kills,’ the letters scrawled across its chest, and large needles are struck through its body at various locations. Inspired to knit by her godmother who, the artist says “was always making things, not frumpy, lumpy things that you hid in your wardrobe, but fashionable, desirable toys and clothes,” Robins knits objects that question accepted ideas in all areas of life, from gender to the nature of human existence.5

Although it seems as if contemporary fibre artists have turned the traditional crafts of knitting, crocheting and lacemaking upside down, for centuries women have found in these media a ‘radical,’ if safe, haven for their artistic impulses. Below the radar screen of their male counterparts, women have been free to create beauty and express yearnings in many objects that are now considered to be works of art, from rugs, wall hangings, samplers and quilts to finely worked garments for royalty and celebrities. The knitting and quilting circles of today are merely emancipated forums in which the expansive possibilities of fibre art can be explored by men, women and children of all classes and backgrounds. The egalitarian nature of fibre art, in fact, is evident in MAD’s inclusion of projects made for social and political protest; a space on the museum’s lower level where visitors can spend time knitting for a variety of causes; and a series of events that criticise unfair labour practices and benefit charities.

The eclectic nature of the entries on the events calendar reveals much about McFadden’s conception for the show. The ‘menu’ includes ‘Tasting Lace: An Edible Lace High Tea’ (featuring Dutch artist Katja Gruijters’s edible creations, among which are lace tiles made from white, bittersweet and milk chocolate); ‘Knit-In! with Warm up America!’ (where participants will work together on an afghan to benefit a charity); and Performance in June by KNITTING NATION Phase 4: ‘Pride’ (an ongoing and collaborative performance and site-specific installation developed by artist Liz Collins).6 If one could express the essence of such a multifarious exhibit, it might be that fibre art can delight the senses and nurture the soul.

A trip to MAD for Radical Lace & Subversive Knitting is highly recommended for people of all ages, backgrounds and interests. In the exhibited works, visitors will discover inspiring examples of vision, creativity and daring. Art in the service of so many ideas and ideals – art in which everyone can participate – is, indeed, art to celebrate. 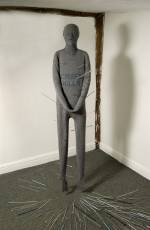 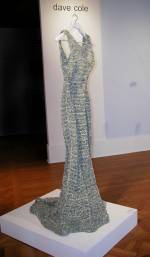 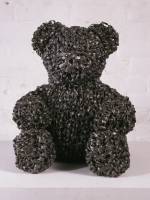