One of the earliest worries one had about Op art was its limited range, not so much in respect of means as of ends. Obviously lots of methods could be devised for making a painted surface flicker, dance and change focus, but wasn’t that all they could be devised for?

The Op range of invention keeps narrowing to a single end-product, reversing the usual potential of a valid new style, which should promise ever-widening possibilities of application. I don’t think this worry has yet been proved altogether unfounded. Bridget Riley is still in a special position because people seemed to recognize from the outset that her work explored moods, sensations, experiences which could be different with each visual image. With most Op art, different visual images all seemed to boil down to the same sensation.

Most new styles tend to have this effect until we get to know them better – until, in particular, we begin to differentiate between artistic personalities instead of lumping them all together, as we are inclined to do at first, under the generalized impact of the style itself. How often was it not said in the early days that all Abstract Expressionists seemed to be painting the same picture? And after that, how much all Hard Edge painters were doing the same? Gradually, though, artists emerge from the style as individuals and are seen to be saying quite different things from one another. Recent exhibitions of the Polish artist Wojciech Fangor at the Grabowski and of new paintings by Peter Sedgley at McRoberts & Tunnard illustrate a stage in this process of familiarization. Both (among other things) paint luminous soft-edged images of concentric circles. Oh dear, here we go again – Op art and its obsessively recurrent concentric circles. And do they come and go, and start spinning, and ripple out from the centre, and make after‑images of the complementary colour, as you look at them? Yes, they do. What are these artists, Siamese twins? Not really, when you get to know them.

Fangor’s circles are painted, patiently and immaculately, with the brush: Sedgley’s are done with a spray-gun. Fangor’s colours are expressive, in the sense that their choice is dictated by the artist’s personal feeling; Sedgley’s are obviously that also, to some extent, but they nearly always progress through the set sequence of the spectrum. Given the other similarities between their paintings, these may seem trifling distinctions. In fact, they make all the difference between two almost wholly opposed types of lyrical feeling – Fangor’s gentle, meditative, relating to human scale, a poetry of hovering luminosity, like moonlit nights; Sedgley’s dazzling, visionary, beyond scale, a poetry of fathomless radiance, reaching out into the night only astronauts know. Fangor’s is perhaps the more conventional, though none the worse for that. He would be a sensitive and poetic colourist whatever his idiom, and his achievement is to bring the Op idiom within the traditional field of what one might call the hand-painted picture, the brush-marked canvas. Sedgley’s spectrum-type colours and sprayed surfaces combine to make his work look more like analyses of light. Surface, in the sense of any awareness of the picture-plane, almost entirely vanishes (‘almost’ because on going very close one suddenly discovers the grain of the canvas), and the effect of aerial lack of focus is particularly subtle in certain hexagonal paintings studded with pin-points of colour looking like projections of light through a pierced filter. But even if this degree of successful illusionism makes one study the paintings as if they were beautiful natural phenomena, the images still come across as something intensely felt and surprisingly personal. 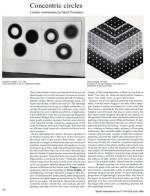