Bermondsey Street these days exudes a growing calm satisfaction: a local Tate, its own “village festival”, antiques and farmers’ markets, the looming tower of the Shard. Estate agents’ windows are filled with warehouse conversions sporting exposed wooden beam ceilings, and on an autumn evening the pubs, cafes and restaurants that line the street glow warmly. At 144-152 White Cube has just opened its largest space yet.

At the end of a driveway, set among the warehouses, the Poussin Gallery’s Colour and Substance show features an established group of artists who have been exploring variations of form and media and their effects on aesthetic experience for decades. The pay off of the years is fairly clear in the easy facility with colour, line, and tone, on display here. John McLean’s large Traffic Yellow sculpture shows off a high level of control, as its three cut sheets of primary colour metal rise over two metres in height without feeling especially heavy, or sacrificing any sense of flow and unity between its parts.

William Perehudoff’s acrylic paintings contrast thicker with more washed in areas that on the whole manage to hold together bright and unexpected colour contrasts with a sense of depth; the fizzing blur of light that seems to emanate from AC-87-124 (1987) is especially intense. The small cut steel models that came out of William Boepple’s efforts at designing a broadcast radio tower have a restrained elegance. The buckling sheets of coloured metal that animate the interiors and appear to infect and stain some of the struts even, though I suspect Boepple would dislike the reading, give a sense of organic life to these otherwise inanimate steel structures.

Set against these, however, the large plywood constructions by Tim Scott look, albeit deliberately, fussy and rough: The clearly displayed marks of their production – glue, pencil marks, much smaller wooden bits added here and there – seem over the top and slightly ineffective by comparison. McClean’s canvases are cleaner within their own currently rather limited rules of variation. While some feature extra canvas strips stuck down Polka (2011) almost reverses the process, with brighter shapes begun with lightly brushed on translucent paint to mimic cut and pasted gouache-on-paper, then given their form by the later opaque green on green ground. The shapes float above presumably as intended, just as the slight degradations of colour that ring the right hand white circle in Acrobat (2011) set off the tumbling movement of its thickly defined yellow red and black shapes.

With Gerhard Richter at Tate Modern, and White Cube Bermondsey’s Structure and Absence filled with abstract art alongside Chinese scholars’ rocks, the comparison is hard to resist. Unlike the blacks, greys and whites of the photo-based Richters, and that dominate at White Cube, there is a feeling of assured calm to these works that belies their bright colours and apparently experimental nature. The catalogue claims a unifying link in “a belief in finding meaning within visual form, and a consequent mistrust of art that hints at or openly professes a hidden message or profundity. If you want ‘sublime’, you have to get on and paint it”. But sublime is the last word that comes to mind here. Pleasant, agreeable, or beautiful, yes; works that know their place and are happy about it. The catalogue also quotes Oscar Wilde: “It is only shallow people who do not judge by appearances.” A comforting thought for a comfortable SE1 evening. 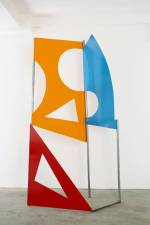 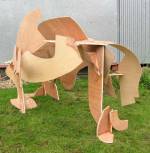 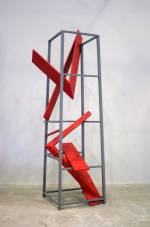