A clever smartphone app has turned Christo & Jeanne-Claude’s London Mastaba into a trick of augmented reality that you can carry around in your pocket, allowing you to site it anywhere you chose 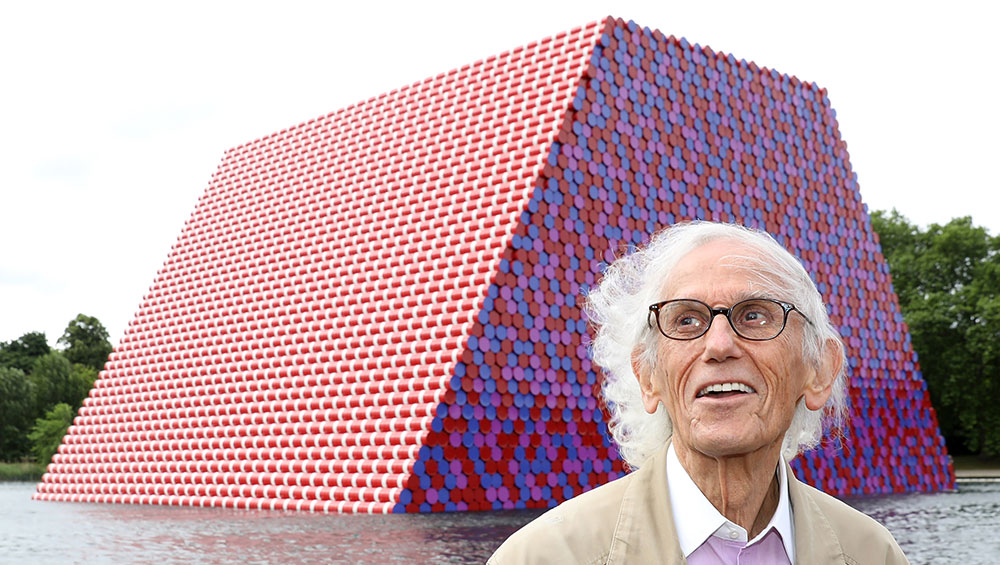 Two years after Christo (1935-2020) placed the vast, brightly coloured, London Mastaba in the middle of the Serpentine Lake, and just a couple of months after he followed his partner Jeanne-Claude Denat de Guillebon (1935-2009) out of the material world, the Mastaba is back – in augmented reality. 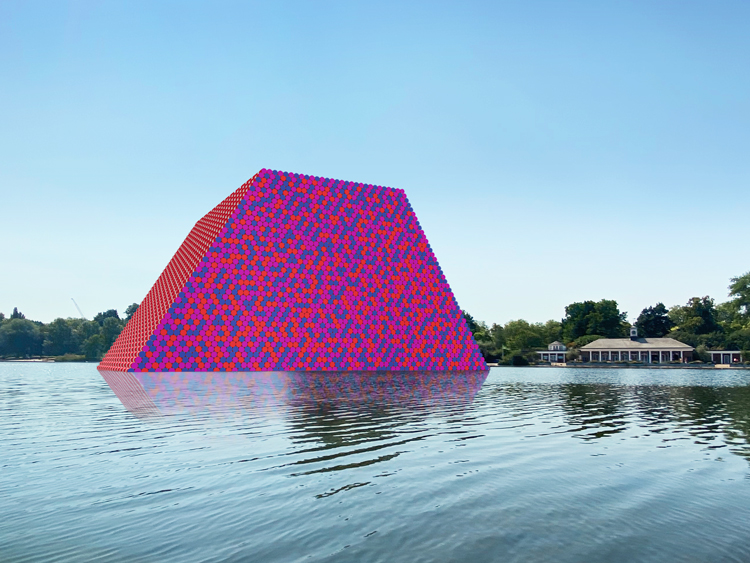 Planned with Christo before his death in May, the London Mastaba AR looks very like the 2018 installation, complete with tri-colour circles at each end and red and white stripes along its sloping sides. This Mastaba, though, is quite unlike the 600-tonne tethered original in being entirely weightless and almost infinitely movable. It is delivered via the Acute Art app, which can be downloaded free to your smartphone (requires iOS 11.0 or later or Android 8.0 and up). It has two modes. One is site specific, recreating the look of the original Mastaba floating on the lake in Kensington Gardens. The other sets the Mastaba free, allowing users to place a smaller version of it wherever they wish.

The London Mastaba (part of a Serpentine Gallery exhibition), which enlivened the city-centre park through the summer of 2018, was made of 7,506 barrels stacked horizontally to a height of 20 metres on a 30 x 40 metre floating platform. 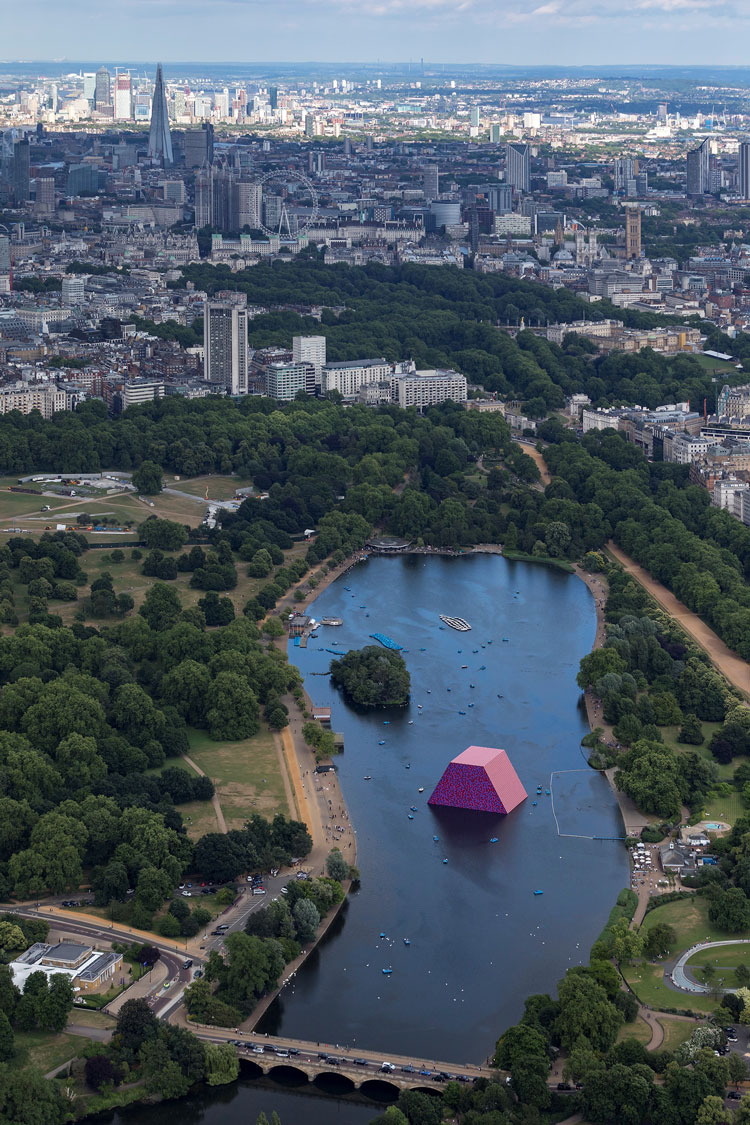 Barrels, along with wrapping, have been a recurring theme in Christo and Jeanne-Claude’s art. Christo began working with old oil drums in 1958, and his first collaboration with Jeanne-Claude in 1961 – also his first large-scale outdoor installation – was Stacked Oil Barrels and Dockside Packages. Like much of the work the couple went on to produce, it was a temporary structure, sitting on Cologne’s harbourside for just two weeks.

Christo and Jeanne-Claude’s site-specific environmental works have ranged across the world, from Wrapped Reichstag in Berlin (1995) to The Floating Piers, Lake Iseo, Italy (2016), Wrapped Coast, Sydney (1968-9) to The Gates, Central Park (2005), in the couple’s adopted home city of New York. Despite years in the planning, the works are famously ephemeral, with the site of the intervention deliberately left unchanged. The legacy of memory in those who have seen the work is, of course, another matter.

The viewing point at the Serpentine Lake in Hyde Park to experience the Mastaba on your smartphone.

The new AR Mastaba app takes this geographic spread and light touch – movability and removability – to its natural conclusion. You may place your Mastaba in front of the Arc de Triomphe, amid Tokyo’s flashing neon, on the viewing platform of the Empire State Building, or, as I did, on London’s Hampstead Heath . The only limit is your own location. And even as it is viewed, the new Mastaba leaves no trace on the landscape except in the eye and the mind of the viewer. In a sense, it is the perfect extrapolation of the artists’ work.

Christo had been interested in the shape and associations of the mastaba for 50 years by the time he completed his London version. Mastaba means “bench” in Arabic and it usually refers to an ancient Egyptian tomb with two vertical ends, two sides at 60 degrees, a flat top, and satisfying 2:3:4 proportions. Christo insisted, however, that he was referring not to graves, but to an earlier use of the word for a bench of the same shape built outside houses in the world’s first known cities in Mesopotamia (modern-day Iraq) 8,000 years ago.

An essentially urban object, the Mastaba Christo created in London was his first to be placed in a natural landscape, albeit in the middle of the UK’s cosmopolitan metropolis. The app allows users to pick their setting and their associations, making it equally easy to land the Mastaba like an alien craft in pristine forest, balance it as an architectural appendage, or use it to “block” a path or road. Several of Christo & Jeanne-Claude’s earlier works with barrels were roadblocks, starting with The Iron Curtain, Rue Visconti, Paris (1962). For this, they used 240 old barrels to stop the traffic on a small street in the French capital. The work was a response to the raising of the Berlin Wall, an event close to the heart of the young Christo, who had recently escaped from Soviet-dominated Bulgaria. The couple had requested permission for the Iron Curtain installation, but when it was refused, they went ahead anyway. The installation lasted a few hours, until the police arrived and ordered its removal. 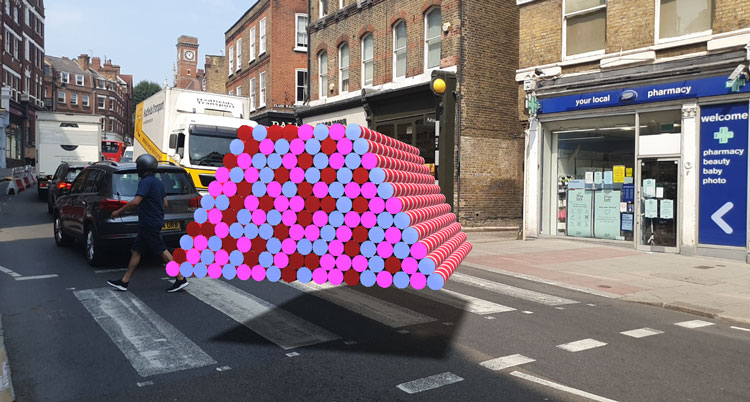 The app will not get you into trouble – unless, of course, you insist on standing in the middle of the road to photograph your virtual creation – and you can place it and remove it without anyone else even noticing. It is most effective in photographs when the base of the Mastaba is flat to the ground or water beneath it, anchoring it in the landscape. It takes a little practice to get this right every time, but it is fun either way. Viewing the Mastaba through the app, the 3D virtual installation is remarkably effective. Several times I found myself taking my eyes from my phone screen and being momentarily surprised to see an empty space where my Mastaba had been. 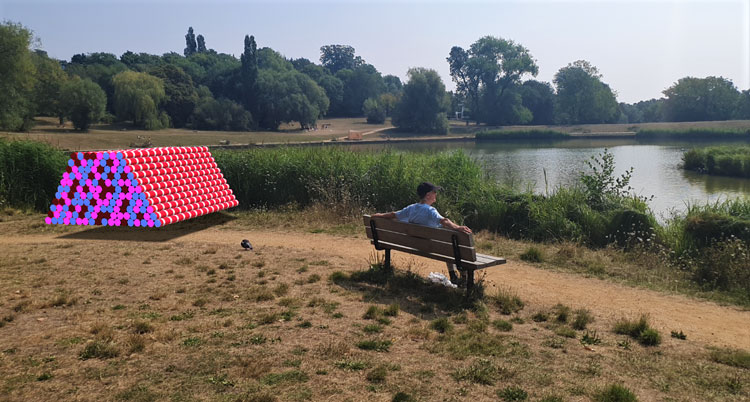 The ability to position the image is not quite infinite. Because you have to point the phone at the ground to place the AR image, it can’t be done above you, or into the middle of water, unless you have a boat. Even then, the app doesn’t much like watery surfaces, preferring the matt solidity of land. The other loss is reflections. One of the joys of the original Mastaba was the effects it wrought on the surface of the Serpentine, and the way it shimmered in changing light. These ever-changing effects can’t be recreated virtually (at least not yet) so the AR version is more visually static. The app does, however, have dimensions the physical structure did not. You can not only walk right around it; you can also walk “into” and “through” your virtual Mastaba. There are no barrel ends here. The AR version is “constructed” of tubes. Walking into the image is like entering the vortex in Alfred Hitchcock’s Vertigo, circles of red and white stripes spiral away towards the light at the end of the tunnel.

Placing the Mastaba very precisely can be tricky, but the possibilities are endless. Having the app on your phone means you can whip it out at any time for a quick Christo & Jeanne-Claude experience. And there is always the option to share your photos online.

At the installation of the London Mastaba, in 2018, Christo said: “The art world has become the virtual world. I like to live in the present.” He also said: “Art is an extremely personal thing. It is not a profession; art is existence … [and it] is incredibly enjoyable.” I think we can take it that the AR Mastaba is an appropriate memorial to this very particular artist, and that  we can feel free to play and create with it in whatever way we choose.

• The app is available to download free here: https://app.acuteart.com/get-the-app/ 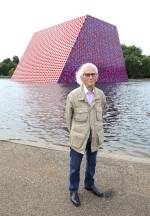 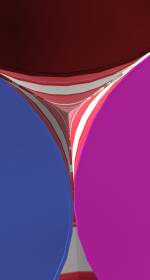