What began in 1979 with a few drawings has finally materialised into a huge 'happening' in New York, with the opening of The Gates: Central Park, New York, 1979-2005

Artists Christo and Jeanne-Claude Javacheff spent 26 years trying to persuade a succession of the city's mayors to allow them to use Central Park for a great art project, but it wasn't until their friend, Michael Bloomberg, was elected that permission was eventually granted. Mr Bloomberg immediately agreed to the project and afterwards stated that Christo had seemed a bit disappointed that this time, he did not have to argue. 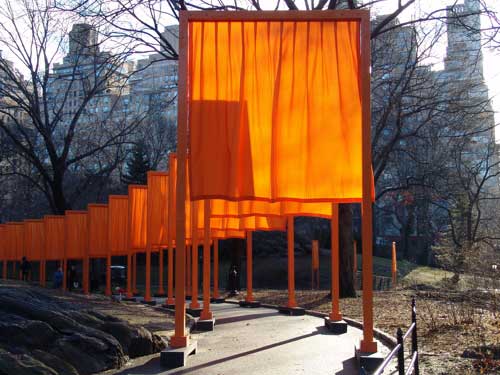 Perhaps one persuasive point for the Mayor was that the city has not had to pay a cent towards the cost of the installation. Christo and Jeanne-Claude raised the estimated $21 million cost of the project themselves by selling drawings and paintings of The Gates. They have also paid for police to patrol the park 24 hours a day. All hotels and restaurants overlooking the park are fully booked, special parties are being held and it is expected that more people will come and see The Gates than have been to see the Mona Lisa since it was painted. All in all, it is hoped that at least $80 million will be generated by the 16-day event. 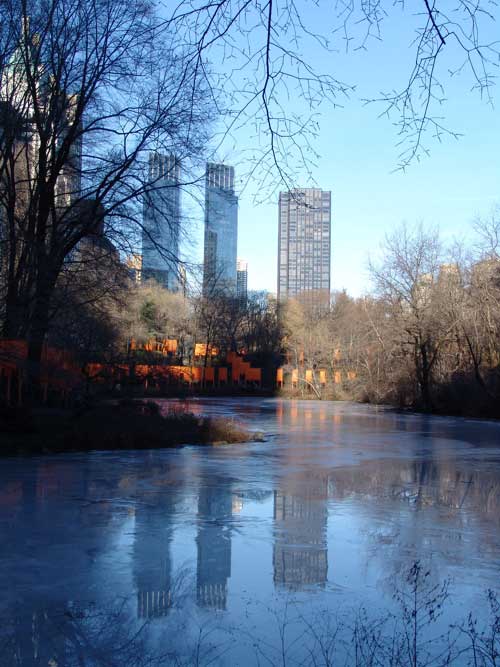 The installation of 7,500 gates was set up by over 600 workers paid seven dollars per hour, it took three months to complete and it covers 23 miles of footpaths throughout the park. Each gate stands at 16 feet tall, ranges from 5.6 to 18 feet wide and consists of two steel bases ranging in weight from 613 to 837 lbs. Two upright vinyl poles are bolted at each end, attached with aluminium-cast corners and across the top is a horizontal pole, from which a saffron-coloured sheet of fabric hangs, swinging in the wind. Helpers with long poles are on hand to unhook the fabric if it gets caught around the crossbar. When the gates are removed, all the material will be recycled. 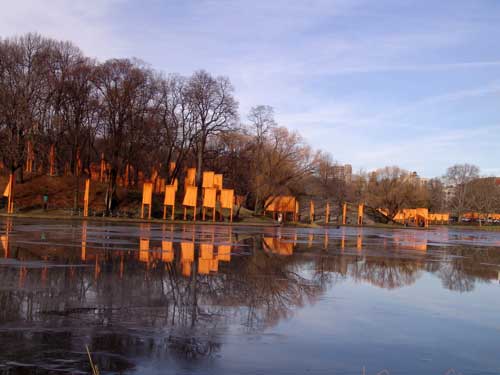 During installation the fabric was wrapped around the horizontal pole of each gate, ready to be unfurled at the opening ceremony, at 8.30 am on Saturday 12 February 2005. It was a glorious weekend and it is estimated that in the first two days, 700,000 people came to experience The Gates. Some members of the media have questioned the definition of the project as 'art', but most people would judge it a fantastic success. 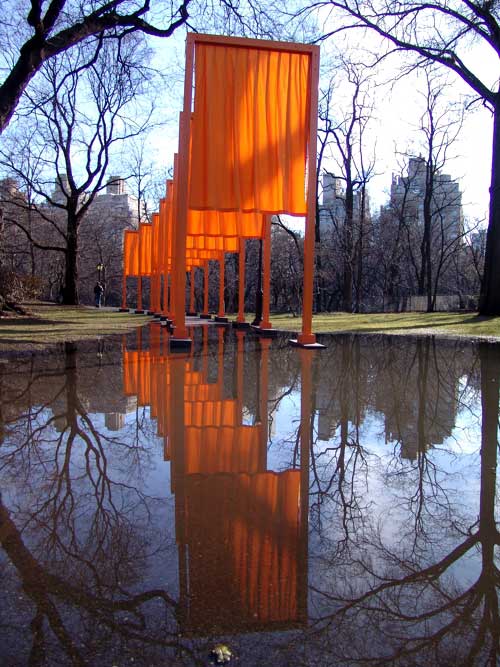 Both artists live in New York and say that they wanted to give something back to their home town. Christo will never draw or paint a project after it has been realised, as he wants people to enjoy it and for it then to become a memory. In a recent interview, the couple were asked 'What do you get from this?' Jeanne-Claude replied: 'What we get is the same as all the other artists, who have created in total freedom, what they had wished to create and it is a work of art, of joy and beauty.' Christo continues: '…enjoy, walk through the gates and enjoy the proportion, the colour. The fabric is very translucent, when the sun is in the back, the fabric is almost golden.' 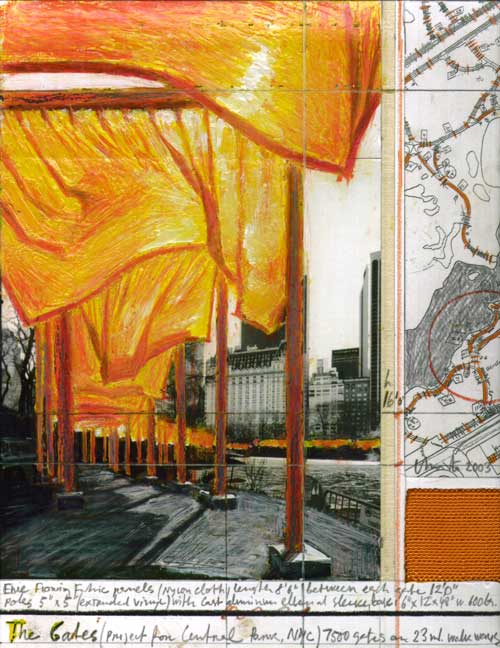 Christo and Jeanne-Claude's next project is to be called Over the River and is being designed for the Arkansas River, Colorado, in summer 2007 or 2008. However, for now The Gates has added a golden orange hue to this already colourful city. 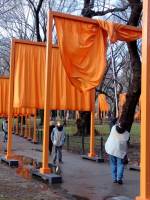