With suitable training, it is possible to date a previously unseen artefact within a couple of decades, and perhaps more precisely. There are historical tidal movements in design and manufacture that enable one to locate an object in a particular cultural milieu and to rule out other possibilities. More than any other significant designer, Christopher Dresser challenges this comforting generalisation: some of his designs were so prophetic that, but for the fact that we have been taught to recognise them as products of the 1870s or 1880s, we would otherwise place them 50 years later, well into the 20th century.

Dresser was born in the same year as William Morris. However, while Morris has enjoyed extensive and continuing historical and critical coverage since his lifetime, Dresser has been given little detailed attention, only being mentioned briefly in general histories of design. Astonishingly, the first monograph on Dresser did not appear until 1990. Hitherto the paucity of Dresser scholarship has tended to distort the true scale and nature of his achievement, on the one hand ignoring the immense variety of his output, and on the other portraying him as an inexplicable visionary.

This exhibition, accompanied by the publication of a magnificent monograph edited by Michael Whiteway, provides an unprecedented opportunity to see Dresser in perspective and evaluate the scale of his achievement.

Given what we now know about his extensive talents, Dresser would have had at least three career paths open to him: artist, botanist and designer. His energy and sensibilities would have equipped him as a successful artist, and certainly a more significant artist than many of the hacks who stocked the Royal Academy of his day. However, his early entry aged 13 into the Government School of Design precluded this possibility. Its students were expressly forbidden to study the human form, which in Victorian times was the essential prerequisite to recognition as an artist.

Dresser became a botanist of the first rank in his twenties, being awarded a doctorate at the age of 25 by the University of Jena on the basis of his publications, and later standing as a credible candidate for the Chair of Botany at University College London. Although he was not appointed, Dresser continued to enjoy respect and honours at the highest academic level, researching, publishing and lecturing widely.

With the two professional avenues of art and botany closed to him, Dresser poured his considerable energies into designing for the burgeoning mass-production industries of his day. The penetrating research he might otherwise have devoted to botany, he committed instead to a thorough understanding of function, materials and production processes. The profound sensibilities that he might otherwise have devoted to art, he lavished upon the creation of ingenious and dynamic surface design for all kinds of artefacts.

Dresser designed for numerous manufacturers and almost every kind of artefact in production including textiles, wallpaper, tableware, ceramics and furniture. Stylistically, his work falls into three broad categories. First, there are the ornamental surface designs, often based upon botanical forms. Although distinctly 'period' in character, they still radiate the energy and sensitivity of their creator. Secondly, there is a class of functional objects, principally in ceramic and metal, which reflect two potentially conflicting design trends: on the one hand a kind of 'metal-bashing' Medievalism with scalloped edges and prominent rivets, and on the other a Japanese-inspired Minimalism. Dresser's visit to Japan in 1876/7 proved to be a life-transforming experience for him and led him to rethink almost every aspect of his practice and design philosophy.

The third category of his output comprises a group of designs in metal and glass for tableware and utensils, which he produced in the late 1870s and 1880s. What is so astonishing about these designs is that they are almost entirely without any kind of ornamentation except for the occasional gesture in that direction. The then novel technique of electroplating lends an astonishing modernity to many of his designs which, to revert to my opening observation, might lead even the experienced eye to place them 50 or perhaps 100 years later.

One can see in these works the quest for purity of form and the elimination of irrelevant detail, which preoccupied so many of the design movements that followed Dresser. The highly reflective electroplated surfaces combined with glass imparts an almost ethereal quality, permitting objects to hover delicately in space. While most of these remarkable designs produce items that invite handling and use, a small number move so far in the direction of minimalist purity of form that one feels a slight degree of uneasiness that perhaps the quest for geometric purity is taking a path away from practicality and function. One can detect the beginnings of a geometric puritanism which, taken to extremes, in later designers culminated in a kind of Bang and Olufsen inscrutability.

By 1879 Dresser was a highly successful designer, in terms of both financial rewards and critical acclaim. In that year he formed with Charles Holme [Holme would later (in 1893) found the Studio magazine] the company Dresser and Holme, dedicated to the import of Japanese artefacts. However, in the 1880s manufacturing and trade was overtaken by a massive recession. Dresser, with a large family and extensive business commitments, was forced to retrench dramatically. Although he continued to design up until his death in 1904, he never regained the level of commercial success and professional recognition that he had enjoyed in his heyday before 1880. He became increasingly marginalised, even in those areas of expertise in which he had blazed a trail.

This exhibition, combined with the monograph, is essential viewing and reading, not only for those involved in the history of design, but anyone with an interest in 19th century culture. It graphically exposes so many of the paradoxes and contradictions that pervaded the world of the Victorians: the conflict between ornament and function, the hierarchical structure of professions, the dialogue between the indigenous and the exotic, and the often heroic struggle of individuals to be true to themselves while entering into a pact with society. 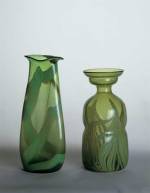 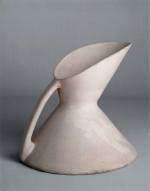 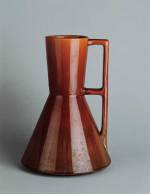 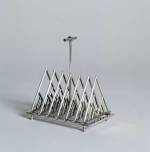 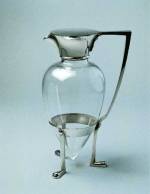