Chihuly at Kew: Reflections on Nature

Chihuly at Kew: Reflections on Nature

As an artist who seeks to create works that appear as if they came from nature, placing interventions throughout such a beautiful botanic garden, Dale Chihuly succeeds in mirroring and augmenting its pre-existing splendour 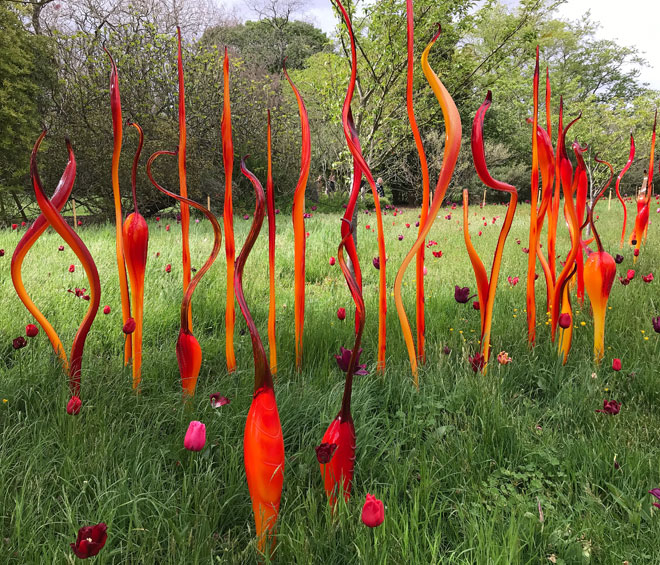 If, as Seneca the Younger claimed, “all art is but imitation of nature”, putting one’s works in among one of the most beautiful natural gardens in London – the Royal Botanic Gardens at Kew – might seem presumptuous, or asking for criticism at the least. Alternatively, of course, one could take the Matissian view, that “great art picks up where nature ends”, and thus see the intervention by American glass artist Dale Chihuly (b1941, Tacoma, Washington) as a challenge and, potentially, a bidirectional compliment.

I chose to review this, his second exhibition in the gardens (the first being Gardens of Glass in 2005, which was so popular that its run had to be extended), as a challenge to myself, being someone who vehemently dislikes his large, florid, and certainly over-the-top chandelier at the V&A in London. I wanted to see if I could be converted to appreciate Chihuly’s work, significantly inspired by nature – both plant and sea life – when presented in such a setting. And, indeed, I 90% was.

Chihuly, who was introduced to glass while studying interior design at the University of Washington, has been working with the medium since the 1960s. The Royal Botanic Gardens at Kew, however, has a history of working with artists going back much further, holding a collection of more than 200,000 botanical prints, drawings and paintings dating back to the 17th century. The world’s first public gallery dedicated to botanical art, the Shirley Sherwood Gallery, opened in the gardens in 2008, and, since then, has hosted 48 exhibitions with works by many international artists. The gardens themselves have formed the stage set for the work of such artists as Henry Moore and David Nash. Chihuly, then, is not the first artist to take on the challenge, although he is perhaps the first whose installations mirror their surroundings so closely.

And his works are no mean feat. For the exhibition, he has had 32 separate installations shipped from Seattle in 11 shipping containers, and his works have found their homes in 13 locations around the gardens – 10 outdoor, and three indoor, including the Shirley Sherwood Gallery, where, alongside glass works, there are also drawings (in which Chihuly suggests you can more directly sense his energy) and a fascinating 48-minute reel of film footage, showing Chihuly and his studio assistants at work on various projects, both at the furnace, and also on site, for example, throwing glass vessels into the Venetian canals, as part of Chihuly Over Venice (1996).

The works in the Shirley Sherwood Gallery serve as something of an introduction to Chihuly’s practice – there are Baskets and Cylinders, Macchia and Seaforms, Persians and Venetians. “The Persians,” he explains (via a wall text), “started out as a search for forms. We worked for a year doing only experimental Persians … We made at least a thousand or more.” A vitrine filled with early Persians is like a case full of jetsam and flotsam – mini vases and vessels, but also an array of seashells. These are expanded (in concept and size) in Seaforms, and even the earlier Baskets, such as Clear Cerulean Blue Basket Set with Black Lip Wraps (1995), which could be an oyster, with the delicate glow of a pearl emanating through the fabulous lighting at work in the gallery. It comes only from above, but it is hard to believe that the works are not also lit from within, so beautifully do they luminesce (Chihuly plays an important role in overseeing the arrangement of the lighting for his exhibitions).

The Cylinders are an ever-evolving series, incorporating glass thread drawings fused on to molten vessels. The Jerusalem Cylinders series, on to which solid, roughly hewn crystals, are fused, are Chihuly’s personal favourite. Perhaps more than any other series, they face the viewer with the contrast of the organic and the manmade, but, curiously, I am unsure which is which. Is the rough, uncut crystal more natural and uninterfered with than the perfectly smooth cylinder, or does it show signs of man’s meddling with and wanton taking from his surroundings?

Moving towards the more plant-like work in the gallery, the two Venetians on display – one a vibrant red, one a dazzling orange – swirl in flamboyant coils like trellis plants. The installation of Macchia – wonderfully displayed on plinths of different heights, like a striking flower bed or bouquet – grew out of Chihuly’s desire to combine as many colours as possible in one series. By adding a layer of white between the colours, blending is prevented, and the outcome is mottled but defined (the title, Macchia, is the Italian for “spotted”, chosen to replace Chihuly’s original title of Uglies, adopted in response to his mother’s view!). “There is a never-ending potential for colour with the Macchia,” he says. “I loved the idea that just a single piece of glass could be like a sculpture and command that energy and attention.” I love the idea – and the actualisation – too.

Generally, Chihuly’s ethos seems to be the bigger the better, and, while, in terms of size, this does indeed impress, in terms of flamboyancy, it is what actively turns me off (à la the V&A chandelier). Summer Sun (2010), for example, which stands by the lake, is far too wild and Medusa-like (comprising 1,483 separate snake-like elements), and the Lime Crystal Tower (2006) (outside) and the Chartreuse Hornet Polyvitro Chandelier (2001) (in the Temperate House) are equally too bombastic. The simpler interventions seduce me far more. For example, the individual deep red and orange strands of Cattails and Marlin Reeds (2015), set on the Cherry Walk amid a carpet of pink, coral, lilac, red, magenta, burgundy and black tulips, and the pastel Neodymium Reeds and Turquoise Marlins (undated), alongside the pink-blossoming Judas tree, reflect and augment the wonders of nature, without competing.

In the Temperate House, there are various interventions, the most sympathetic being the water-plant-like Fiori Verdi (2016) beneath the waterfall, while, in the Waterlily House, there is an epiphany of delicate white lilies, piled up in clusters, some breaking free alone and floating alongside the genuine yellow and purple flowers. While one response to my Instagram post complained that Chihuly’s glass works were an “insult to the waterlily”, this was my favourite installation, simple in its colour and form, each flower unique and delicate, translucent and capturing the ephemerality of nature’s gifts.

The one more magniloquent piece that succeeded in impressing me was Sapphire Star (2010), an explosion of cornflower blue shards, rising from a carpet of bluebells, and juxtaposed against a Grecian temple – an offering of two alternate celebrations of “god” or the spiritual power of nature.

Chihuly once stated: “I want my work to appear like it came from nature, so that if someone found it on a beach or in a forest, they might think it belonged there.” Hence the appropriateness of this garden setting. And hence why I believe it is his simpler works that are most successful. While nature is full of complex patterns and fractals, and while there is nothing wrong with studying these in depth and blowing them up to larger-than-life proportions in the name of studying and/or art (think of John Ruskin’s drawings), I would like to close with the words of Paul Gauguin: “A bit of advice, don’t copy nature too closely. Art is an abstraction; as you dream amid nature, extrapolate art from it, and concentrate on what you will create as a result.” Where Chihuly does this, he succeeds on every level.