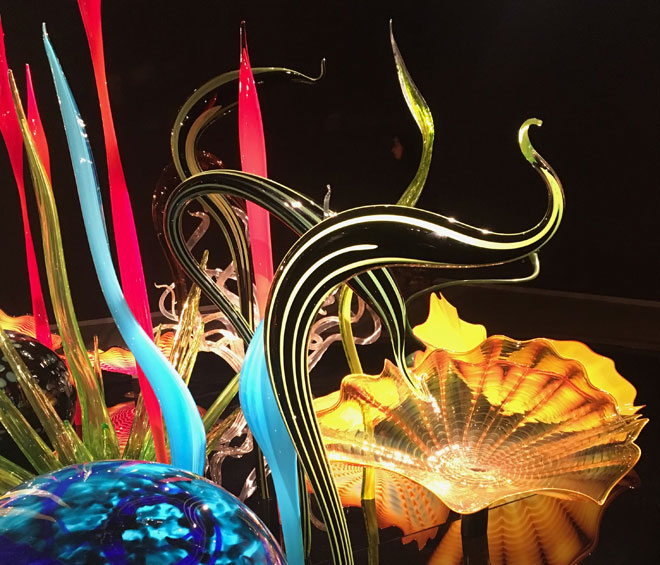 Over the past five decades, the restless creativity and ambition of Dale Chihuly (b1941, Tacoma, Washington) have pushed glass as a sculptural art form to new heights. He has won commissions from the world’s leading cultural institutions to place his cascading, kaleidoscopic or spikily fragile sculptures centre stage, emitting their colour-drenched radiance across all manner of buildings, from ancient to modern, in landscapes both urban and rural. 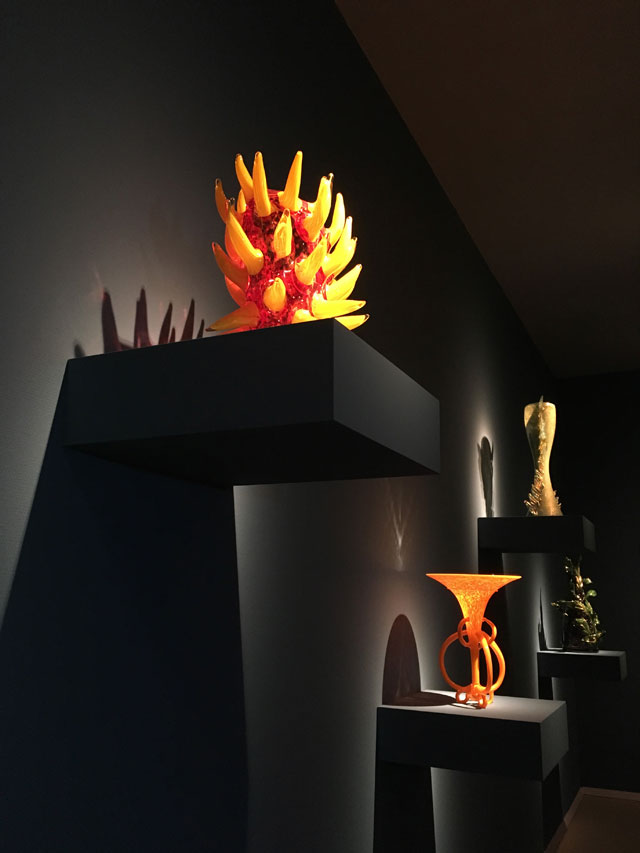 For his biggest European show in 20 years, Chihuly and the Groninger Museum in the north of the Netherlands have selected work that goes broad and deep, making the most of the quirky spaces inside this wonky postmodern structure by Coop Himmelb(l)au. From its watery setting in the middle of a canal, we can see one of Chihuly’s eye-popping neons – a sculptural medium he began experimenting with in the 1960s – reflected in the ceramic tiles near the entrance, while a line of vivid red reeds undulates outside an upstairs window. 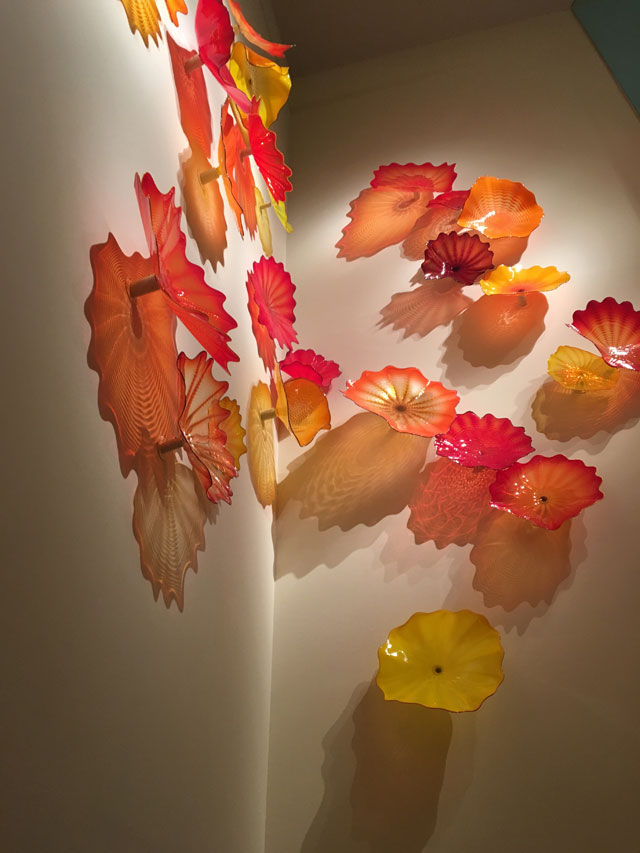 Inside, a newly commissioned cluster of Persians (2018) – a series he started in 1986 - in orange and yellow, pulsate on the white walls of the three-storey atrium, contrasting with the cave-like entrance to the show, illuminated by a shimmering nest of milky-white or inky-black Niijima Floats (1992-2018). One of the most technically complex pieces to create – blown-glass orbs at this scale are near impossible – these floats were inspired by Chihuly’s discovery of Japanese fishing floats washed up on the shores of the Puget Sound, near his childhood home, and also a subsequent visit to Niijima Island. 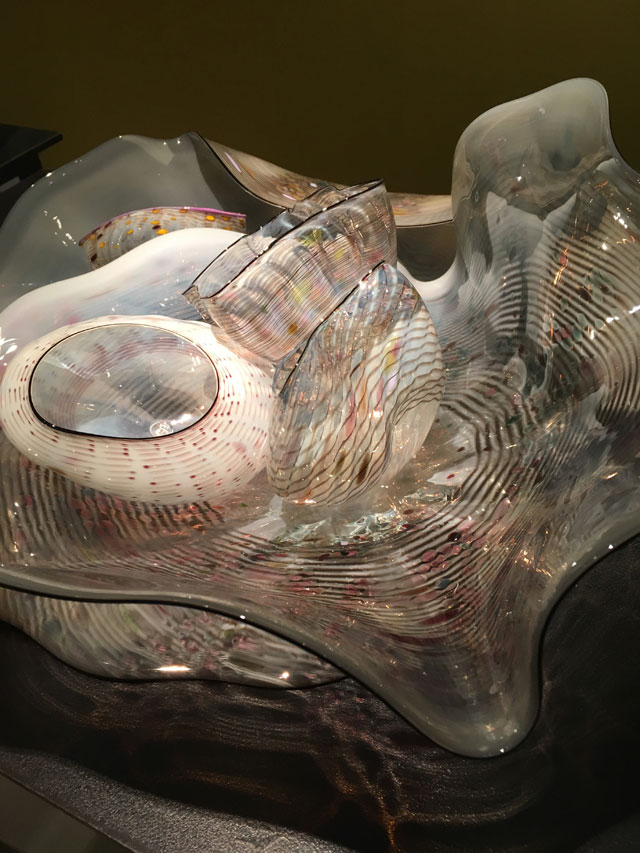 However, over the three floors and half-a-dozen rooms filled with his assorted explorations, for me, the most affecting works remain his Seaforms, devised from his 80s experiments with cast-iron moulds, which allowed him to construct the thinnest sheets of glass with a fascinating, ridged texture. The resulting vessels are impossibly fine, seeming to billow and weave as if, indeed, moved by some underwater current. Beautifully lit – as is every item in this impressive show - the delicacy and glow of these forms casts a spell, with a quiet beauty more seductive (to my eye) than his more solid, painterly vessels nearby. 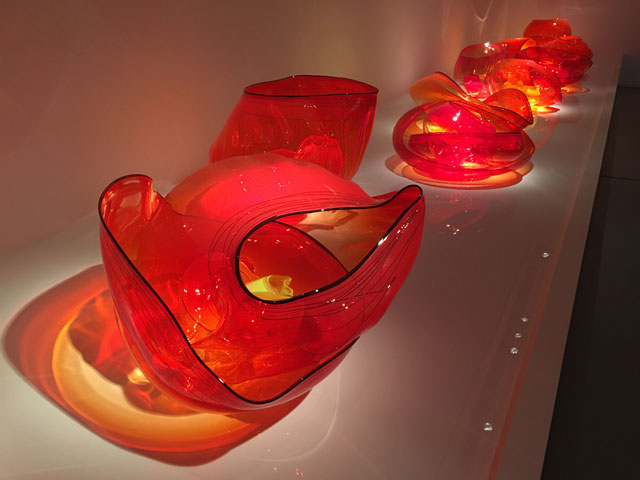 It is no surprise to learn that Chihuly’s first degree was in interior design and architecture (at the University of Washington), and his scene-setting sensibilities are at full throttle in the sensorially rich choreography of this show.

The pallid Seaforms are accompanied in the Early Works room by Baskets, Soft cylinders, Macchia and drawings (1980-82). The mood of this gallery of mostly pale, pink, sunshine yellow and silvery forms is a total contrast to the Venetian room that follows. The Venetians (1988-2006) features descendants of the vivid art deco-inspired sculptures Chihuly created in the late 80s in conjunction with Murano glass maestro Lino Tagliapietra. The inky background, exuberant colour combinations, high shelf-placement and stark spotlighting work to intensify the vivid, living presence of these sculptures, like totems in a temple – and Chihuly’s vigorous, charcoal sketches for these works have a presence almost as strong as the sculptures themselves. 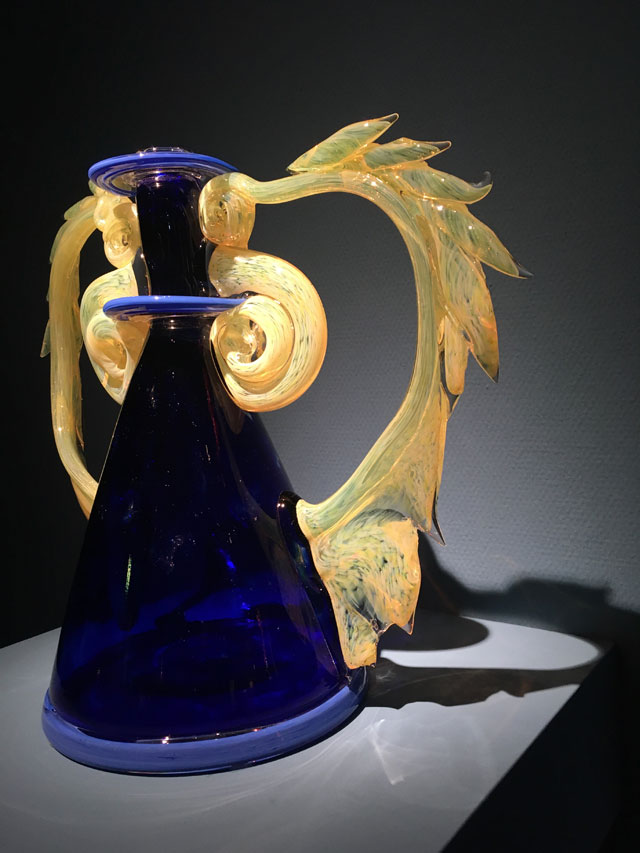 The doorway out of this gallery frames a wall of richly coloured textiles, Native American blankets from a collection Chihuly began as a student, the patterns and palettes of which have long been an inspiration. While the Cylinder works that accompany the blankets date from 2006, Chihuly began this series in 1975, when he perfected the technique of “pick-up drawing” – transferring a drawing in glass threads on to a molten vessel. As well as white on white, there is vibrant-against-black, but my favourite series is where the “drawing” has been embedded in thick, clear tubes of glass; their multiple scattered lines like the branches of some fantasy tree, trapped in ice. 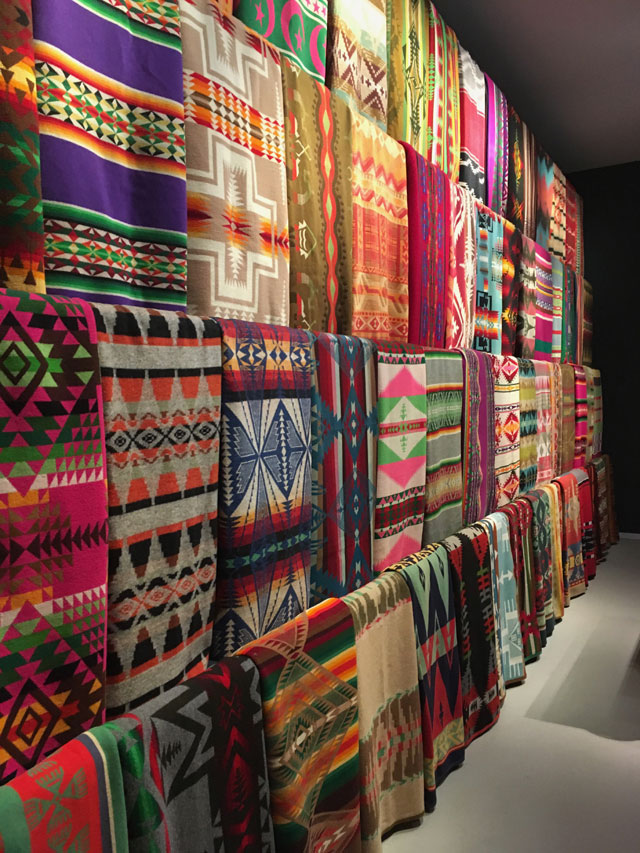 The northwest-themed room that follows reveals the enduring influence of Native American baskets, too – with Tabac Baskets (2008), and earlier Baskets (1979-1981) placed next to originals from his collection - but between these rooms there is an entire corridor lined with faxes. These densely worked scribbles and cartoons have been vital in conveying Chihuly’s ideas to clients and to his team, especially given the artist’s struggles with mental illness (he is openly bipolar) and injury (he lost the sight in one eye in a car crash and a surfing injury dislocated his shoulder).

As his success and ambition grew, so did his team of apprentices and skilled glass artists. He now has around 100 employed at his 34,000-sq-ft (3,159-sq-metre) riverside studio in Seattle, and many more at Chihuly Garden and Glass, the museum he opened in the city in 2012. Perhaps mindful of a recent lawsuit, in which a former worker claimed he was not properly credited for his work, Chihuly makes the collaborative nature of his creations crystal clear in this show, with a biographical timeline at the end, which names the lead artists and technicians responsible for assisting him with each series and in each period. 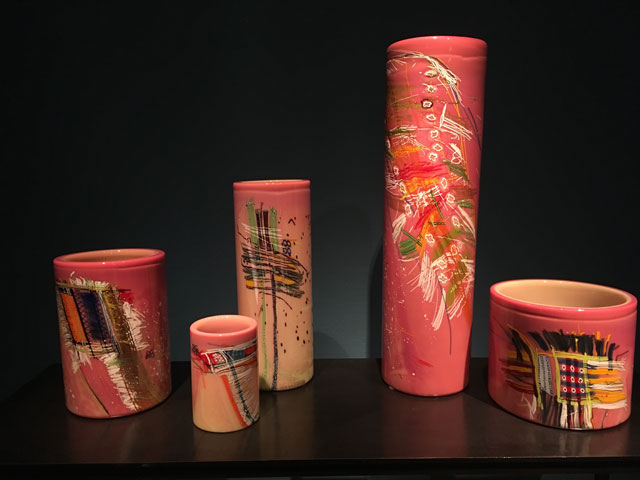 After the earthy, more subdued tones of the baskets, complemented by some exquisite Peach Cylinders (2016), we are plunged into the full-spectrum display of one of his Mille Fiori (thousand flowers) processions of garden-inspired exotica. As with his Halcyon Gallery show in London 2011-12, these are placed on a mirrored platform, doubling the impact of this dazzling array of shapes, tendrils and hues. However, for me, the Fire Orange Baskets (2002-2013) display that follows is even more impressive for the brilliance and variety of what Chihuly’s studio achieves within a far more limited palette of red and yellow, nested basket forms. 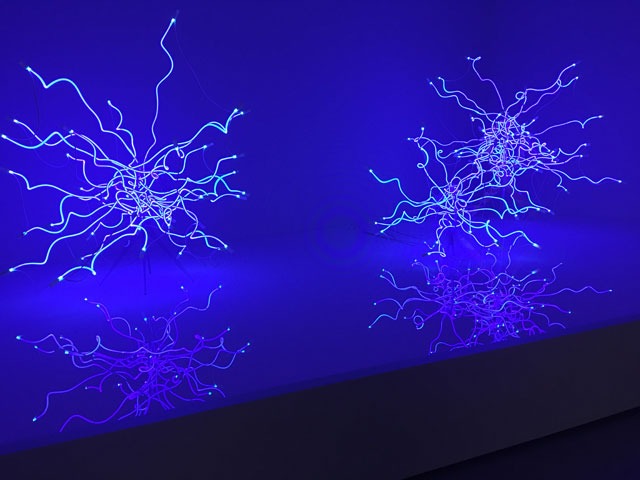 The next room features his recent Rotolo series (2015-2018): twisted, rope-like, monochrome structures, these show extraordinary technical mastery but fail to ignite in the manner of his finer, more filigree pieces. With a brief digression into neon again – three Sapphire Neon Tumbleweeds (2018) pulsate in their own blue-drenched space - the show culminates, on the museum’s top floor, with the appearance of the kind of architectural installations that have lit up many a museum/gallery forecourt: the spiky, single-hued intensity of his Icicle Chandeliers and Towers plus a Float Boat and a Fiori Boat. Chihuly first devised the idea of filling boats with his glass sculptures for a Chihuly Over Venice project in 1995.

While the scale and quantity of work that pours out of Chihuly’s studio have led some to question its validity as genuine Chihuly art (there are beautiful glass items on sale in the foyer, here, for €7,000 a pop), this show celebrates the sheer brilliance, inventiveness and absolutely impeccable quality that has been established through his vision and maintained through his teachings. And it pays tribute to Chihuly’s alchemical wizardry in conjuring these magical forms from breath, fire, pigment and sand. 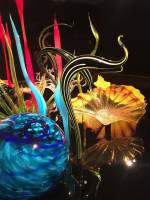 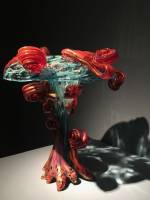 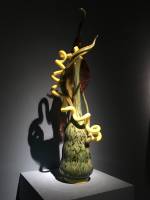 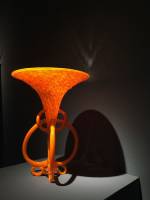 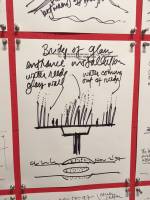 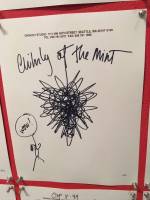