Controlled but creative, formulaic but somehow free, hypnotic in their undulation and unique in their variation, the graph-paper paintings of the late Californian artist demonstrate the infinite possibilities of line and colour

This exhibition at Raven Row presents a range of the work of Channa Horwitz (1932-2013) from throughout her career. It focuses in particular on two major series that were pivotal to her practice: the Language series (1964-2011) and Sonakinatography (1968-2011), significant because she worked on them for long periods and they formed the central basis of her style, which she continued to develop in variations on the theme until the end of her career.

In both of these series, and indeed much of her work, she used graph paper as the canvas on which to form her experiments in line and colour. She wrote formulae using the pre-lineated grid of standard American graph paper, which has eight squares to the inch,  a satisfying canvas for her mathematical mind.

The Language Series was her first foray into a formulaic way of working. Finding herself with an inclination for basic shapes, lines and block colour, she decided to limit her apparatus to just that. Within the series of works, solid black shapes are placed neatly on grids like bar charts, subtly varying in composition like an impossible IQ test.

A few years later, she developed the Sonakinatography series, in which she introduced further complexity to the works, using numbers and colours as well as shapes and lines, until it reached 23 different possible compositions of infinite variations. The lines become coloured threads on a loom combining to create an intricate pattern. A neat little key in the corner of the paper shows the limits and bounds she set herself: “Each square on the 64-square grid has a colour, sound and time for movement which is represented by a number. That number determines the progression of an object from square to square. When an object lands on a square it responds in colour, sound + length of retention. The time of movement on the graph is designated by a black outline around a square.”

The title of the series, Sonakinatography, was named after the Greek words for sound, movement and writing/recording, suggesting how these formula were, in fact, created for music, dance and spoken word performances. Her works functioned like sheet music, a strict and precise codic language that evolves off the paper into something very free. Some of the Sonakinatography works look like colourful musical notes formed of numbers and squares, cascading vertically like written Japanese.

During the first week of the exhibition, there was a sound installation in the downstairs space. Speakers were suspended from the ceiling, from which rumbled a wholesome, hollow, echoing sound that reverberated between the them, exploring the space. The following week, when I dropped into the gallery again, instead of the speakers, plastic foam mats were set out and a group of people dressed in white knelt in a circle, the sound of their low voices reverberating around between the bodies, again exploring the space. The same work played out through a different medium showed the capacity of Horwitz’s formula to bridge mediums; a universal language that brought her 2D works into what she called the “fourth” dimension.

Horwitz was interested in the multidisciplinary nature of art and, in 1968, she submitted a proposal to the Art and Technology programme at the Los Angeles County Museum of Art. The programme, which ran between 1967 and 1971, was curated by Maurice Tuchman and paired artists with technology companies, scientists and engineers. Horwitz’s proposal, shown at Raven Row, is a tabbed diagram, which illustrates eight vertical Plexiglas beams and eight beams of light, which are suspended in space together and move within magnetic fields.

It was the only submission to be accepted into the programme that was not included in the exhibition, which became a topic of discussion and protest among the feminist art community in LA, which confronted Tuchman because the exhibition featured only white males, including Öyvind Fahlström, Newton Harrison, RB Kitaj, Rockne Krebs, Claes Oldenburg, Robert Rauschenberg, Richard Serra, Tony Smith, Andy Warhol and Robert Whitman.

While Horwitz was a contemporary of some of these artists, it was only during the final few years of her life that her work began to be featured in international exhibitions such as the Whitney Biennial, New York, 2014 and the Venice Biennale, 2013. Even this show at Raven Row, three years after her death at the age of 80, is only the second iteration of her first large-scale solo show at an institution.

The upstairs floors at Raven Row show later works, from the mid-70s and 80s, characterised by an intense and magnified focus on the pictograms outlined in earlier works. In the Canon series, the pictograms grow into voluminous patterns that stretch kaleidoscopically across the paper with a fascinating energy.

The effect of these later works, while mathematical and achieved through simple equations and the addition of numbers and distances, is also very liberated and free. In Moiré (1984), the works take on the form of an undulating ocean wave of colour catching highlights and lowlights reflected from the sun, collecting velocity and showing that even the most complex visual impressions of nature can be simplified into line and colour.

A sculpture titled Breather (1968/2005) is one of the few 3D works in the exhibition. Made of Perspex, a motor, a pump and plastic, it fills with air and deflates, making a crumpling sound as it does so, to a steady rhythm like an inhale and an exhale. It plays with volume in a modest and experimental way and its soft edges are a reminder of the Light and Space movement, with which many of Horwitz’s contemporaries were involved, both at the California Institute of Arts where she studied in the 60s and in LA where she lived in the 70s.

The Light and Space movement, also known as Californian minimalism, reduced the formal properties of art, such as shape, line and colour, to the bare minimum. Examples of the movement can be found in the minimalistic edges of sculptures by John McCracken and the geometric precision of Larry Bell. While Horwitz did not fall comfortably into this movement, her work can be seen as a precursor to this wave of artistic creation.

Instead of blurring and blending the spectrum of colours, as did Helen Pashgian or James Turrell, Horwitz separated out the pigments like oil and water on the paper. The thin, yet strong line she used was a coloured one that she began to work with in the Sonakinatography series. It is done in casein paint, which is often used on furniture because of its water-resistant properties. It also dries to an even consistency, giving an effect similar to that of a printed line.

Horwitz’s graph-paper works formed the heart of her practice, and they are almost hypnotic when collected together and displayed in their numbers in the gallery. The exhibition shows the obsessive complexity of her formulaic style of working. While she was making these series, from the mid-60s until her death, she lived and worked in seclusion; the time and focus she dedicated was evident in the Sonakinatography series and the works that later developed from that.

While volume was an interesting byproduct, and performance resulted from the lines and patterns of her work, the Language Series and Sonakinatography show that what fascinated and drove Horwitz most was the forming of experimental compositions using the basic apparatus of line and colour on graph paper. 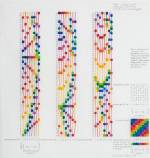 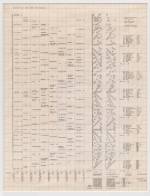 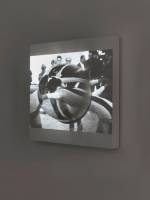