Two exhibitions of Chagall’s paintings overlap this summer, though surprisingly they have quite little in common other than in timing.

While the French, in Chagall Between War and Peace at the Musée du Luxembourg in Paris, give credit to the artist’s long life and brilliant resistance – painting through two world wars and a Revolution, not to mention the early death of his wife Bella, and a lot of wandering through Europe – the British take on Chagall concentrates on his very early career, and therefore misses much of his brilliance.

That is not to say that Chagall’s early life was not fascinating. His move to Paris as a young man, and the explosion of creativity he experienced there, produced much of his best work – the obscure as well as the very famous. Jew in Red (1915), David (1914), The Promenade (1917), and Introduction to the Jewish Theatre (1920), are just a few of the 70 paintings on show at Tate Liverpool that cover this intense and productive period. They mark his romantic imagination, and the way in which the move to Paris from his native Russia brought with it a wonderful freedom of thought and experimentation that led to paintings combining Jewish mysticism and folklore with the bright lights of the avant-garde scene.

And yet to focus almost entirely on the exciting, youthful phase of Chagall’s life, and work, is to deprive new visitors to his work. The Paris exhibition, Chagall Between War and Peace, contains a better wisdom of his work, in showing it with appropriate focus on the wider historical and political context of wars, revolution, exile and death. In so doing, we do not fall into the trap of thinking Chagall too fantastical and whimsical and romantic. His paintings do express all of those flights of thought, but that tendency can only be fully appreciated when we understand the bloodshed and despair – not only of Chagall, but also of most in Europe at that time – that made this fantastical and colour-filled world a necessity.

Although the Liverpool show contains some of the darkness also in his work, as a way to expose the depth of his work often overlooked, the Paris exhibition does a better job still, in showing the darkness in the world around him as well – and in allowing the audience to see his ageing and moments of decline, as well as the fairytale moments and rich imagination that were, perhaps, the “peace” to the war around him.

Chagall was 97 years old when he died in 1985; he witnessed much of the brilliance and darkness of the 20th century. His work is a kind of history of it; a history not only of the literal, but also of an individual’s response to it – a history of how painting came to be an exit from the turbulence of the time, as well as a reimagining of it. In his dreams – in the upside-down goats and lovers and iconography – Chagall encapsulated a sincere humanity, in the midst of so much dehumanisation and change. He painted of folklore and love and religion, as revolution, war and anti-Semitism threatened those things.

While some of these qualities can be seen in the early work celebrated at Tate Liverpool, a trip across the sea to Paris gives a better context – a more serious appreciation of the darker aspects of Chagall’s work, and the long century he worked in. 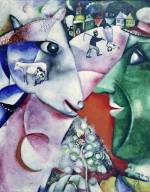 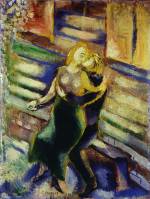 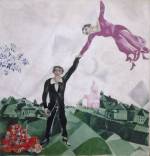