The works presented here show some of Carrà’s key metaphysical works, charting his jettisoning of movement, fragmentation and volatility in favour of calmer, more cryptic and perspective-bound compositions 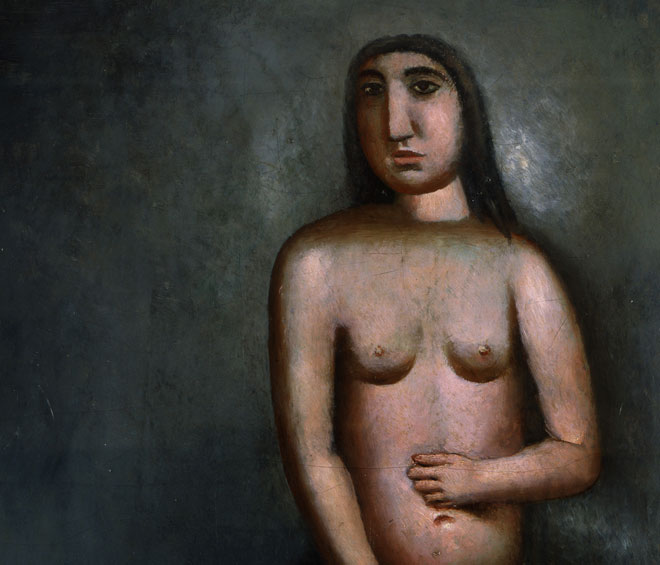 “For me, art is a continuous process; it is in a state of continuous spiritual crisis which finds its own balance … Futurism was but one of these crises.” So remarked Carlo Carrà (1881-1966) in a letter to friend and fellow artist Ardengo Soffici in early 1917. Once a core member of the movement, Carrà had by this time moved away from futurism. Carrà met Giorgio de Chirico in a psychiatric unit during the first world war, and they helped to consolidate each other’s ideas; they founded the (ultimately short-lived) metaphysical art movement, its paintings typified by eerie, dream-like landscapes inspired by classical architecture and incongruous objects accented by perspectival trickery.

Metaphysical Spaces at Blain Southern, curated by Ester Coen, falls a century after the start of this shift in Carrà’s artistic sensibilities. It seeks to expose this transition in greater detail, both through the display of several important artworks from the period and through accompanying correspondence between Carrà and his artistic contemporaries, many of which are published in English for the first time in the exhibition catalogue. The works, presented in chronological order, chart the artist’s jettisoning of movement, fragmentation and volatility in favour of calmer, more cryptic and perspective-bound compositions.

Carrà was born in Quargnento, Piedmont, and began drawing at the age of seven. At the turn of the century, he made trips to Paris and London, artistic awakenings where he discovered the work of Renoir, Cézanne and JMW Turner, and the writings of the Russian revolutionary anarchist Mikhail Bakunin and Karl Marx. In 1910, he met the poet, art theorist and founder of the futurist movement, Filippo Tommaso Marinetti, the painter and sculptor Umberto Boccioni and futurist painter and composer Luigi Russolo, and played an important role in drafting the Manifesto of the Futurist Painters (published 1910), a foundational text for the movement, which rejected traditional forms and embraced a kinetic, mechanised future within which Italy would displace French artistic dominance and return to primacy.

In 1912, the group exhibited in Paris, London and Berlin, which brought them to widespread attention; there are only a couple of paintings exhibited at Blain Southern that stem from this early period in Carrà’s career. Sintesi di un Caffè Concerto (1910-12) and Pugilatore (1913), both charcoal sketches, bear hallmarks of the early futurist style: they are fragmented, somewhat abstract compositions, swerving lines communicating a sense of movement and change.

Visitors are greeted by Penelope (1917), an arresting picture that, for the purposes of this exhibition, acts as a bridge between Carrà’s futurist and metaphysical periods. Penelope is composed of riveted machine components, fragmented shapes interlocking in arcing lines, but the central figure is static: Penelope appears as a model or statue rather than a being in motion. Carrà seems here to have been just as occupied depicting the rigid cuboid room in which Penelope stands as the figure herself, a tendency visible in many other paintings and drawings on display.

Unlike de Chirico, whose metaphysical paintings were often shot through with sinister undertones, Carrà’s work is more tranquil and occasionally playful in its combination of elements. Mio Figlio (1916) shows a child in front of a simple backdrop, accompanied by two geometrical shapes, a ghostly doll and a wide-eyed fish. Il Figlio del Costruttore (1918-21) is starker, a child in a cube-like room accompanied by a racquet, ball, stick and yellow rectangle, which draws attention to the classical perspective Carrà has applied to the background. A preparatory drawing for this work, also on show, demonstrates that Carrà had planned for additional details, but has removed them, focusing attention instead on the figure of the child within the geometric space. As Coen remarks in her introductory essay for the exhibition catalogue, from 1915: “The animated vitality of futurist lines in Carrà’s work are replaced by isolated objects, fixed by an esoteric, emblematic and enigmatic language.”

And enigmatic they are: La Casa dell’Amore (1922) stands out as particularly eerie, a semi-naked woman holding her hand over her stomach in a gloomy room, watched over by a cat that seems half mammal, half hieroglyph. This exhibition features numerous sketches of faces, bodies and mannequins, alternately elongated, compressed and frozen in ambiguous expressions. Many of these figures are simplified, stocky and child-like, reminiscent of the primitivist paintings of Henri Rousseau. Carrà admired Rousseau’s work greatly, highlighting in a 1951 essay that he devoted an entire chapter of his book Pittura Metafisica (1919) to the way Rousseau “more than anyone else had achieved our justifiable desire to guide painting back to its essential purposes”.

The focal point of this exhibition is the work Il Pino Sul Mare (1921), “Pine by the Sea”, shown in the UK for the first time. The building to the left sharply recedes into the distance, recalling Renaissance studies in this skilled use of perspective, while a pine tree and a wooden frame draped with cloth sit at an indeterminate distance from each other on a nebulous beach. The eye is drawn diagonally from the building’s door, across these details, to a square cave on the right. This small canvas, a tranquil and simple composition, received strident admiration from the German art historian Wilhelm Worringer, who remarked in 1925: “Simplicity is something highly complex … This is proof that there is in fact a path leading from unavoidable, modern complexity towards this kind of simple and thus generally comprehensible beauty.”

Il Bersaglio (1928) and Casa Abbandonata (1930) show similar rustic scenes: buildings with simple facades, placed at the centre of slightly flattened, shimmering landscapes. The latest of Carrà’s works on show acts as a counterpoint to these paintings: Mistici, sensuali, contemplativi (1941) is possibly the most mysterious of the paintings on display, three figures lamenting around a central pair engaged in a stabbing, placed within a swirling red landscape accented with grey-blue and lit by a white disc. Many works displayed invite allegorical interpretations, and this painting is no exception, a theatrical scene that thrusts the viewer in medias res.

During his life, Carrà’s work was presented only twice, at the Sackville Gallery, London, in 1912, and at the O’Hana Gallery, London, in 1960; the vast majority of these works are held in private collections. This exhibition offers an impressive insight into the work of a figure of significant historical importance, and offers visitors a rare chance to see some of Carrà’s key metaphysical works, which haven’t been shown together for more than 50 years.