Carla Rapoport: ‘I like to think we’re the Elvis of the art world’

Carla Rapoport: ‘I like to think we’re the Elvis of the art world’

The founder of the Lumen Prize says Elvis brought gospel and black music into the mainstream, and she hopes the annual Lumen awards will do the same for global digital art 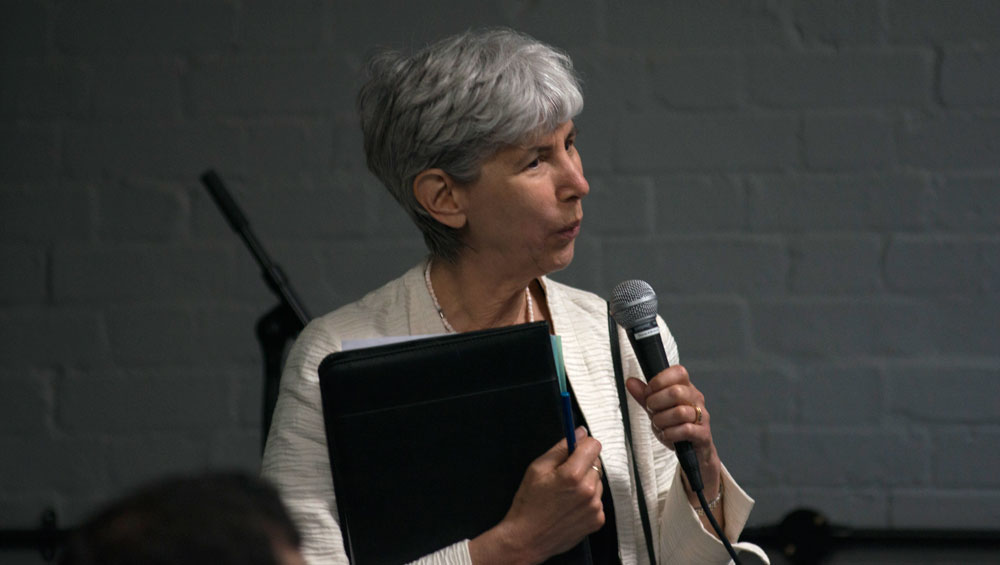 Carla Rapoport abandoned a comfortable life in financial journalism to support her passion for digital art and artists. In 2012, she founded the Lumen Prize, which has tapped into – and helped to unite – a close-knit and collaborative community working at the intersection of art and technology, touring the winning entries around the globe each year. We spoke to her as Lumen celebrated its most successful awards yet

Veronica Simpson: You have just celebrated the fifth annual Lumen Prize Awards for digital art, with more entries than ever before and such a richness and diversity of work that you had to introduce specific awards categories. So clearly it is going from strength to strength. What was your inspiration for this prize?

Carla Rapoport: My background is financial journalism. I was writing primarily about tech for the last 10 years of my (salaried) life, working for the Economist Intelligence Unit. I was fascinated by the idea of how technology affects the way people live all over the world. I’d seen what it had done to publishing, and also what it had done to music, and was curious to see what it had done in the art world. I have always been passionate about art and spent all my free time at galleries and museums.

I didn’t see it having a huge effect until I saw the David Hockney show (in January 2012) at the Royal Academy [which included a display of drawings he had done on his iPad], and I went back and back and back. And saw it couldn’t just be Hockney doing this. I saw that there was a very special role tech had played in this field, which ignited my interests in history and art and technology. And I thought the best way to shine a light on the people doing these things was to pull together a really good panel of judges and create a group of artists who could be termed prize winners and take that winner’s tour global. It was accessible to see and enjoy. It didn’t necessarily need a lot of trappings. It just seemed to fit the times because of the way people were thinking about their devices, the way people were using their technology. There has always been a divide between the people who say tech is ruining their life and the people who think it’s the best thing ever. I’ve always been in the latter camp.

VS: How has the work and the approaches evolved or shifted over the past few years since the Lumen Prize launched?

CR: A lot. I wasn’t prepared for that. The first year, we had 50 works in our tour. We had a long shortlist. And 38 of them were still images. The rest were moving, video works. And I think we had one or two pieces that did something else.

From there, things started to change. We started to get more interactive works, then apps, then it was virtual reality [VR]. Who knows - every year, it’s always something amazing. The still images still come in, and I do have a very soft spot for them. So our show is careful to make sure that all the types of digital art can shine. That’s why we decided on categories this year. I have learned about the genre by running the prize, and the artists have been teaching me. The audiences have been teaching me. Not having any preconceived ideas about what it is has helped us. I linked up with the Computer Arts Society, with Nick (Dr Nicholas Lambert, head of research in digital media) at Ravensbourne. This has really helped us to connect to the pioneers. Doug Dodds (senior curator at the word and image department at the Victoria and Albert Museum) made clear in his presentation at the 2016 awards gala that the pioneers launched this genre way back in the 1960s. Now, every year, I think people are just more comfortable with the latest technology.

VS: Where do you think the most interesting areas of invention or creativity are right now?

CR: I guess the most interesting ideas are in VR. That’s where the so-called cutting edge in this field is. However, some of the works that came in this year, in terms of both moving image and still, were astounding in their attention to detail. We are all amazed at what we can do with our phones to engage with reality and virtual reality. There’s incredible work being done with interactive. Being able to utilise this new approach to the palette using the 64m colours on a computer or iPad is always dazzling. A work came in on the shortlist from Mexico – Eduardo Nava’s The Tree – which very much reflected that country’s artistic traditions.

VS: Why do you think there needs to be a specific focus on digital art, rather than the work being viewed within the wider “contemporary art” arena?

CR: It’s sort of the same question you get about women’s awards. I think until digital art is really given a proper platform in the contemporary art world, there needs to be a prize to shine a light on what they’re doing and build audiences. Otherwise, people see it as a kind of funfair. Or they see it as a gimmick: here today and gone tomorrow. To help make it into a serious genre, an award such as Lumen is necessary. We chose the word Lumen specifically to be non-technical. We’re the Elvis of the art world. He grew up hearing gospel and black music and blues in poor areas of the south and incorporated that into his own work and moved into the white music world. He paved the way and we are hoping we will pave the way. It will take a while because anyone over 45 will be frightened of this. They have not grown up with it. They are not digital natives. The crossover will take time. It will take another 20 years or so.

VS: How do you see all these interesting pockets of technology-related art evolving, given the increasing proliferation of – and appetite for - digitally enhanced light art, sound art and film?

CR: I think there is going to be a market for this art. You have very courageous curators, such as Ben Vickers at the Serpentine Gallery, who continues every other year or so to put on a digital show; commercial galleries, such as the Caroll Fletcher Gallery and Gazelli (Art House), which always include it in their programmes; or Bitforms gallery in New York. Then there is this new platform, Niio, to help collectors and artists conserve and keep their work safe. I think people will start to buy it and download it. You have seen a strong primary market for people such as Cory Arcangel, Ian Cheng and a bunch of people who are starting to achieve good prices. There isn’t really a secondary market yet. There are a few people tapping into this area. There are collectors, such as Anne and Michael Spalter who have a collection of early digital art [The Spalter Digital Art Collection], which is very interesting. He’s the chairman of Rhode Island School of Design.

You go to Tate Britain and every single room has a digital piece in it.
There’s been a Bill Viola in Tate Modern since it opened. It’s been around but there are so few Viola and Arcangel pieces. And balanced against that are the Damien Hirsts and Jeff Koonses. But I can’t help feeling digital is so much more authentic. A lot of these artists do their own processing, they write their own software. They are brainiacs. I’m really drawn to that: the nerdy artists. They’re fascinating to me. The old ones who pioneered it are dying off – we need to treasure them. But, still, there are so many new ones coming through.

Artists don’t make their art for anyone but themselves. You don’t start with the art world’s approval in your head. Look at someone like Grayson Perry. He has managed to succeed, but he is always very diffident about his success. Digital artists are like that. They are true to themselves and won’t try to commercialise this.

VS: Where are the hubs, geographically and institutionally?

CR: Ravensbourne is one. And Jonathan Kearney, course leader for the MA in Fine Art Digital at Camberwell Art College is very supportive. I’ve got two of his graduates working for me now. Goldsmiths has a whole department devoted to this genre and there are universities that have specialised in this. A couple in Scotland: Duncan of Jordanstone College of Art and Design and Abertay in Dundee. In New York, there’s the School of Visual Arts and the Pratt Institute of Art and Design. The design and art schools have taken it on first; the animation schools have taken it on - following the lead of their students, for the most part.

VS: Finally, I was curious about the fact that the Lumen Prize is based in Wales. What’s the attraction?

CR: It’s got space and it’s cheap. Those are the two things artists need. And it’s beautiful.

Wales also has an extraordinarily vibrant arts community and the city of Cardiff has been supportive of Lumen from the start. Ubiquitous broadband means you can live in rural Wales - where property prices are so reasonable - and still be in touch with artists in Canada, New York City, Shanghai, or really anywhere else.

VS: How do you keep in touch with the global digital art community?

CR: I use Skype, WhatsApp and Google Hangouts all the time to talk to artists and people interested in Lumen shows - in China, it's WeChat. And I can look out over the Black Mountains while I’m having these conversations - bliss!