System Attempt Contact critiques the way today’s tech multinationals transcend the borders between global and local, city and suburb, on- and offline

Anne de Boer’s exhibition at London’s Banner Repeater examines Industry 4.0, a cyber-physical, service-orientated form of manufacturing, based on coordinating resources from globally dispersed facilities that are connected to one another via a network of computers. Produced in collaboration with an internet-based artificial intelligence called ecksenis.net, de Boer’s multidimensional video work, System Attempt Contact (2017-18), is part wall-projected, part screened on a pair of monitors attached to a large aluminium frame, and part live-streamed at ecksenis.net.

The work combines camera footage of rundown European manufacturing sites of previous industrial revolutions with text and diagrams from Amazon patents dating from between 1995 and 2017. Together, the installation forms a critique of Industry 4.0 multinationals and their drive to acquire and accumulate land, capital and power and, in the process, transcend the borders between global and local, city and suburb and on- and offline. 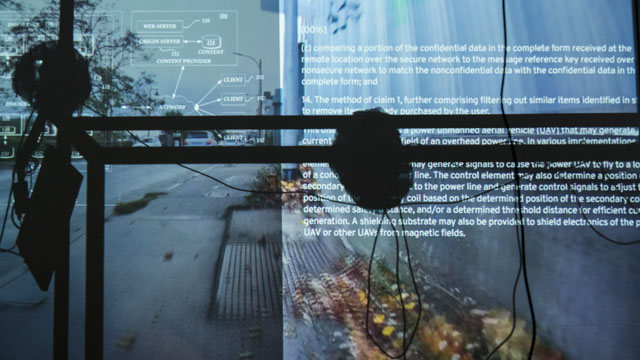 Using a shuffle algorithm, ecksenis.net randomly intersperses De Boer’s footage, forming a kind of automated montage of pan-European industrial sprawl, projected on the gallery wall. The artist’s unsteady handheld camera roams between London, Paris and the Netherlands, suggesting a spatial proximity and openness that despatialises and deterritorialises national borders. It feels somewhat anachronistic as the UK plans for a post-Brexit future, but then large cities have always been international gateways of trade and communication, even more so since the arrival of the internet. The world’s metropolises are constantly connected via a network of submarine cables, satellites, computers and phones.

Today, in anthropologist Marc Augé’s words: “The world is like a single immense conurbation.”1 It is a uniform megalopolis. Except for flash glances at car numberplates, there is nothing to distinguish between the cities; the terrain and architecture, each road, bridge and riverside industrial estate looks more or less the same. And, worryingly, the global unicity is only getting bigger, swallowing rural and suburban areas, collapsing the barrier between the local and global and leaving a ubiquitous geography known as “glocal” – a domain in which the gallery finds itself, positioned on platform 1 of Hackney Downs overground station, a portal between outer and inner city.

De Boer’s ambling footage seems devoid of any intent until Amazon patents superimpose it, mapping themselves on to the cities’ landscape. We imagine the camera operator has been sent on a reconnaissance mission to scout for potential new warehouse sites; the exhibition space becomes a kind of nerve centre where tech execs might plan the next city to add to Amazon’s ever-expanding retail distribution network.

Like the colonialist of previous centuries, Amazon and other multinationals of the Industry 4.0 era display an insatiable appetite to accumulate the world’s land, resources and power – perhaps not by military force but by economic pressure, the neocolonialist way. Indeed, Jason W Moore, an environmental historian, whom de Boer consulted for System Attempt Contact, dates the origins of capitalism to 12 October 1492, the year Christopher Columbus encountered the New World. Moore calls this “Year Zero of modern power, genocide, and capital accumulation”.2 So, in late 2017, nearly 250 years after James Cook encountered its shores, Amazon established operations in Australia and built its first “fulfilment centre” in the suburbs of Melbourne, providing a foothold in a huge new market and further spreading the reach of its empire.

But in the era of Industry 4.0, Amazon’s power stretches beyond physical to virtual space. The various patent diagrams presented in the projection, on the screens and ecksenis.net show PCs, smartphones, laptops and tablets as well as drones, fridges and key fobs organised around a central cloud labelled “network”. It marks the increasing prevalence of the internet of things (IoT) – a network of physical devices that use sensors and embedded connectivity to capture and exchange information over the internet, like a fridge that orders more milk from the supermarket before you run out. As with Amazon’s warehouse network, the network of IoT devices is becoming increasingly widespread and dense, connecting and commoditising more and more things we have daily used free of charge. Whether outside or at home, our actions and the things we touch communicate an increasing quantity of data to the wider world, just as ecksenis.net is constantly feeding information between the gallery and a website that can be accessed anywhere. As urbanisation decentres the city and neocolonialism deterritorialises borders, virtualisation connects us well beyond our physical surroundings.

References
1. Non Places: An Introduction to Supermodernity by Marc Augé, published by Verso, 2008, page xii.
2. From a lecture entitled World accumulation & Planetary life, or, why capitalism will not survive until the “last tree is cut”, delivered by Jason W. Moore, 20 December 2017 at Goldsmiths, University of London.

• Jason W Moore will be in conversation with the artist at Banner Repeater before the close of the show. Date to be affirmed. See gallery website for details. 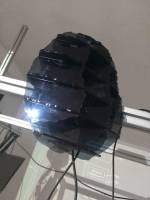